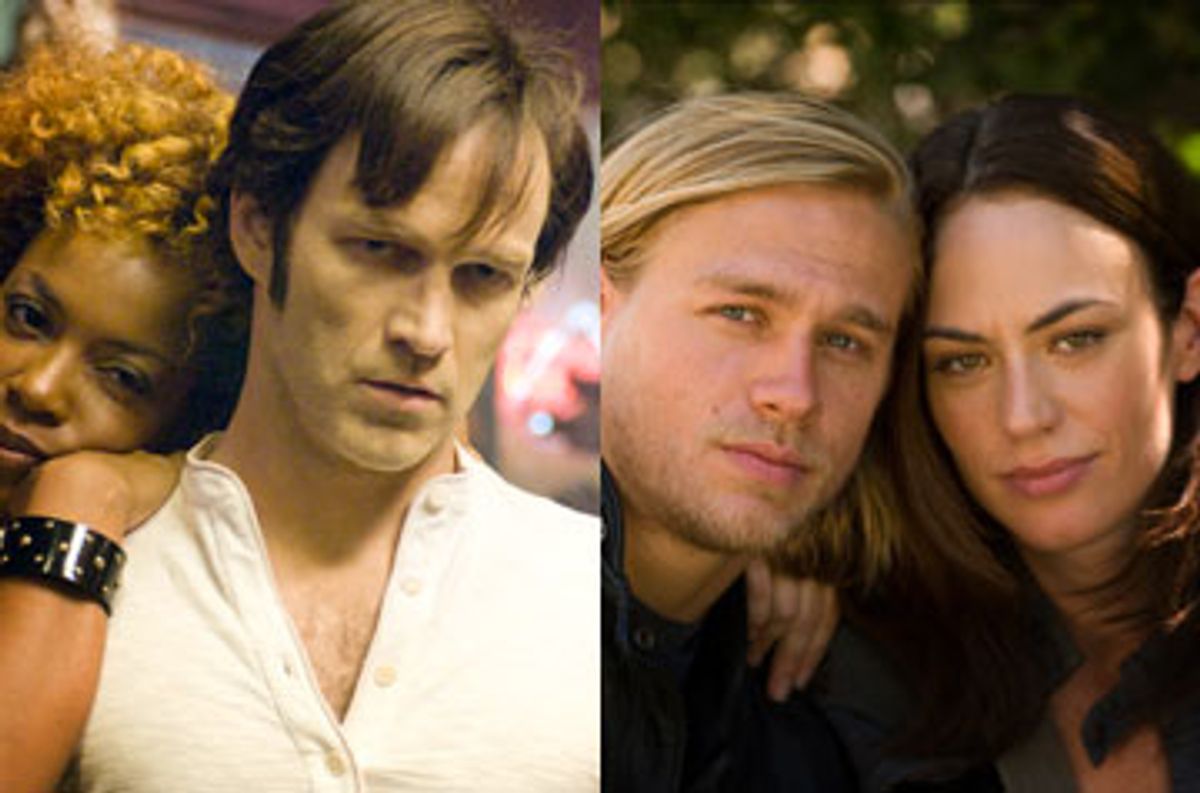 Looks like we'll have to bail out Detroit just to avoid a widespread economic collapse. But can we at least make them promise to stop making shitty cars first?

My husband drives a Ford Focus. Our mechanic can't have a conversation about the car without using the words "piece of shit." I can't drive the thing without using the words "piece of shit." The other day, I was flipping through the Ford manual in the glove box to find out what kind of oil the car takes, and it actually said, "Change the oil every 3,000 miles unless you want this car's piece-of-shit engine to seize up -- although that might be preferable, since then you could replace it with a Toyota or a Honda or something."

It's not just the Fords, either. Don't even try. I've driven Chevrolet Impalas, Chrysler Sebrings, Jeeps -- they're all bad. The seats aren't comfortable, the interiors are ugly, the doors slam loudly, the front windshield is a foot higher than sight level, the knobs are obnoxious, the ride is bumpy and loud. They only rent these cars because no one wants to own one.

And how deeply wrong is it going to feel to write the Big Three automakers a huge check just to keep churning out crappy cars? Along with contingencies that will prevent them from spending half of their bailout money on a four-month executive excursion (Isn't that one of their crappy car names?) in Belize, let's make them pledge to make a car that people actually want to buy. Or, to put it in more legally binding terms, one that doesn't suck.

This unforgiving attitude toward domestic carmakers could just as easily apply to domestic showmakers. Lately, everyone's losing sleep over the cancellation of ABC's "Pushing Daisies." Now, sure, that show was a sweet ride when it first hit the broadcast highways last fall. Great cast, delightful set, whimsical premise, clever dialogue. It was the Honda Element of TV shows: Odd, yes, but charming in its own quirky way.

Here's the thing, though: Would you really want to own a Honda Element? One of the burnt orange ones, say, that looks like part of an Ikea children's bedroom set? I think not.

Likewise, you probably didn't tune in regularly to watch "Pushing Daisies." Oh, sure. You admired its originality and flair on more than one occasion. You remarked at how refreshing it was, to see something so off-kilter and smart on TV. You cooed at the beautifully designed set. You were even heard to exclaim, "My, that Kristen Chenoweth really is the full package, isn't she?"

But then Wednesday night rolled around, and where were you? Out in the driveway, trying to get your Ford Focus to start.

Fine, you watched the show here and there. We all did. But there's an essential problem with this show's format. It's serialized, yes, but no major narrative arc is likely to pull you in and keep you interested in what happens next. It's farcical and humorous, yes, but it doesn't make you laugh out loud several times per show, nor does it wrap up in half an hour. It has a procedural, mystery-of-the-week structure, yes, but it's impossible to care, even by the end of the show, whether the lion tamer killed the troop of juggling midgets, or whether they formed a cult and poisoned themselves with Draino-laced grape Kool-Aid. "Pushing Daisies" tried to be everything to everyone, and failed. Because even if you absolutely love the idea of a serial, procedural, farcical dramedy -- and Lord knows, I do -- that still doesn't mean that you want to watch one every week. Chances are, despite your best intentions, you find yourself watching Kevin McKidd telling Sandra Oh she's hot while strummy indie-girl music plays in the background instead.

Spare us the cutter

Speaking of which, did anyone else notice how, right after I gave "Grey's Anatomy" (9 p.m. Thursdays on ABC) a good review, Seattle Grace went stark raving mad? Suddenly Little Grey (Lexie) is going renegade, performing high-risk surgeries in the hospital basement, Cristina Yang and Owen Hunt are falling quickly into clichéd, swooning, violent-embrace, McDreamy territory, and Izzie is making sweet love to a ghost.

First of all, the whole story line with the whiny interns who're just aching to cut people up and sew them back together really gets on my nerves. Yes, I know that real interns are like that. My sister is a surgeon. But this plot has been handled in such a fantastical yet cloyingly cute way each week -- The automated mannequin patient who bleeds and talks back! The live pigs that are given adorable names, then slaughtered for the sake of medical science! The rumors that Little Grey is a cutter! -- that I have to fast-forward through these scenes just to keep from changing the channel.

Even so, you really have to love the "Grey's Anatomy" writers' blatant decision to take revenge on Katherine Heigl for her comments last year. (She announced that she was taking herself out of the Emmy race, saying, "I do not feel I was given the material this season to warrant a nomination.") The writers have given Heigl exactly what she wanted: lots of emoting and freaking out and tears and heavy sighs, all over ... a dead guy. Yes, Denny, the heart patient whom Heigl's character Izzie was engaged to and tried to save by snagging another man's donor heart (She makes it look so easy!), has reappeared. He talks, he walks, he gets naked, he makes Izzie scream out in ecstasy from behind her closed bedroom doors. Is Izzie going crazy? Is Denny real, and is "Grey's Anatomy" about to segue into some unholy medical version of "The Ghost Whisperer"?

But more important, is Heigl happy now? Does she realize that the writers are trying to torture her? Or doesn't she care, as long as she's allowed to travel through hope, regret, mourning, longing, self-doubt, despair and back again in a matter of minutes? Isn't she a little worried that someone will notice that her acting isn't all that great along the way?

Anyway, it all adds up to the fact that "Grey's Anatomy" occupies a very different place in the TV market than "Pushing Daisies." "Pushing Daisies" is a quirky and delightful Honda Element, a show you admire from afar and wish you wanted to watch more, but somehow, you don't. "Grey's Anatomy" is a slick, shiny Lexus SUV, a show that you can't stop watching even though it's bad for you and the environment and it'll bankrupt you every time the tiny computer chip that controls the windshield wipers breaks down.

Smart, talented people make Hondas and Lexuses, and smart, talented people write "Pushing Daisies" and "Grey's Anatomy." But sometimes, a very good, original, clever show just doesn't work, and a good but uneven, soapy, overwrought show just does. After all, this is TV we're talking about. We should ask for more from our televisual narrative artistes, I agree, but sometimes when we do ask for more, and we get it, we still don't want to watch.

Other shows got canceled, too -- or, excuse me, pulled from the lineup, if you want to employ the kinder, gentler lingo of network executives who think we're fracking idiots. Well, then, let's play along with their little game of euphemisms, shall we? ABC's "Dirty Sexy Money" and the CW's "Easy Money" became the latest victims of the current credit crisis. ABC's "Eli Stone" gathered no moss -- and very few viewers -- and summarily sunk like a stone. The CW showed no love for "Valentine." Fox sent "MadTV" to an asylum far, far away, to spend the balance of its days drooling into its chocolate pudding cups. NBC banished "My Own Worst Enemy" to its own private Idaho, far away from the prime-time schedule, while inviting Brooke Shields and Kim Raver to drink some Draino-laced grape Kool-Aid in their own private "Lipstick Jungle."

Personally, I think that "Easy Money" and "My Own Worst Enemy" deserved more of a chance. Both were in their first seasons and showed a fair amount of promise. And let's get real, compared to the rest of the fall TV lineup, those two were instant classics. What else is any good out there, aside from "Life on Mars"?

In some maddening twist, the best shows on TV right now -- most notably HBO's "True Blood" and FX's "The Shield" -- are limited to 13-episode seasons, so they just wrapped last week. Sure, that kept them dense and purposeful, and it kept us wanting more. Even so, I want more! I want more Vic Mackey, I want more Sookie Stackhouse! I don't want to watch "Numbers" or "NCIS" or the very, very last season of "ER," I don't care if George Clooney comes back and makes Julianna Margulies attempt suicide all over again! Are "Top Chef" and a flimsy "24" special going to keep me warm through the holidays? No, my little chicken-fried steaklings, they are not!

See what happens when the TV schedule suffers? I suffer! And when I suffer, you suffer, chicken-stuffed raviolis! Somebody write the TV industry an enormous check and save the world from condescending foodie terms of endearment once and for all!