Guns and bombs in booming India

Amid calls for a fierce crackdown on "potential terrorists," Indians strive to define the Mumbai attackers as "the other." 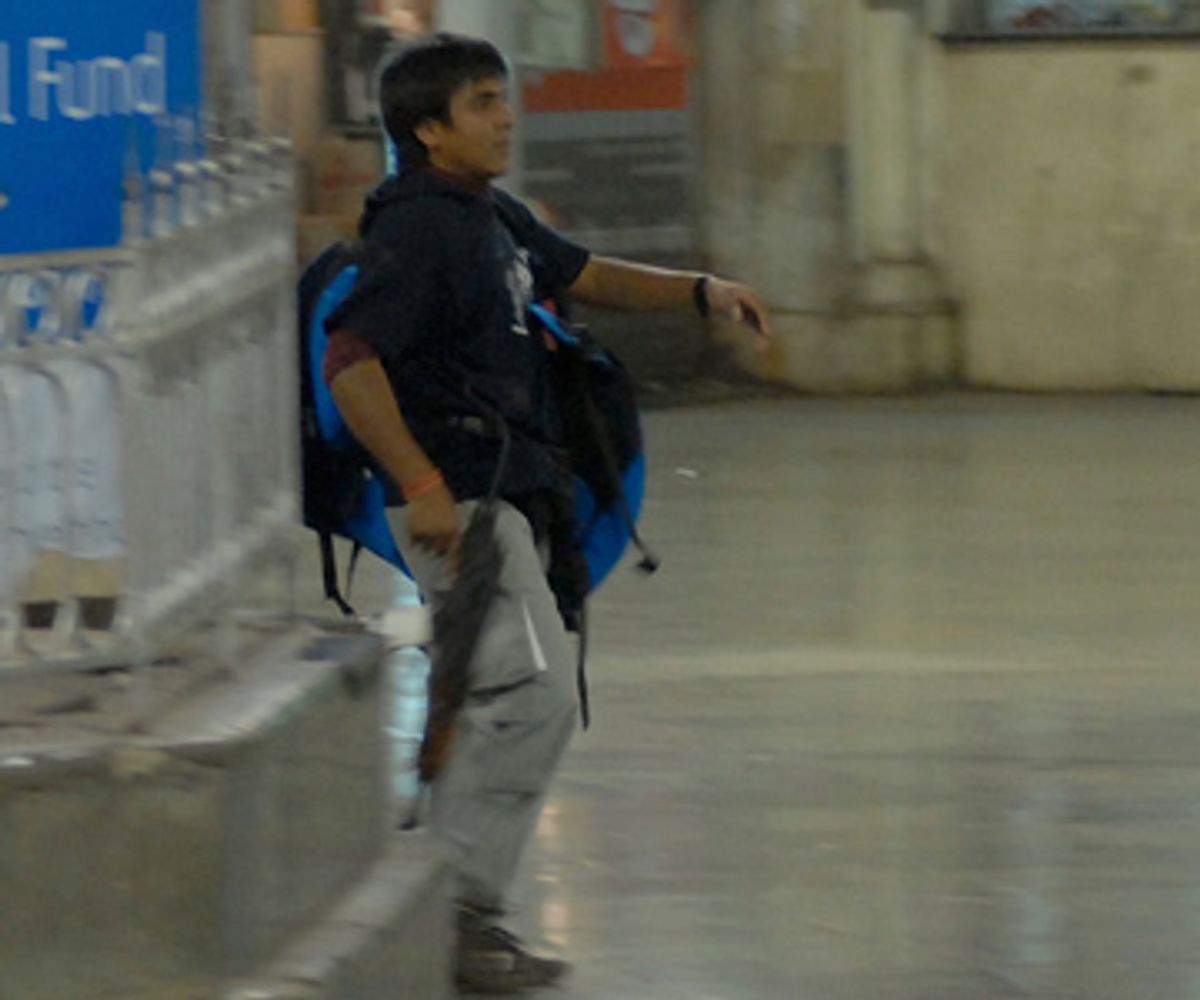 In India "the other" is already being identified, out of the rubble of luxury hotels and shattered glass. The Mumbai attackers were young men "based outside the country," Prime Minister Manmohan Singh says. They came, we are told, by sea. Like pirates. Some may have been British citizens. When one of the hostage takers contacted an Indian news station, the journalist kept asking him "Where are you from?"

In short, are you Indian? Or are you "the other"?

Three days after the start of this awful siege,  which has killed more than 150 and injured more than 300 people, I remember one of the first faces to emerge out of the horrifying scenes of burning hotels, sprawled bodies and uniformed police in Mumbai. "Is he one of the victims?" asked my roommate as we looked at the fuzzy image of a young man in a dark t-shirt, the word VERSACE written across it in white. My roommate obviously hadn't noticed the assault rifle he was holding.

That man whose image was beamed across the world could have been one of the victims. "They were very young, like boys really, wearing jeans and T-shirts," a British tourist told The Times.

In short they were wearing the uniform of a young India. A uniform that allowed them access into the sanctum santorum of Indian high society, which they then proceeded to blow up.

The face of that gun-toting faux-VERSACE t-shirt-wearing assailant was haunting in its ordinariness. And its familiarity.

He could be Pakistani.

He could be Indian.

He is almost certainly Muslim.

With newspaper editorials calling for the head of the Indian Home Minister over this colossal failure of intelligence, and demanding a new, zero-tolerance war on terror that many fear could result in more hardship for Muslim Indians, I am curious about the young assailant I saw on television.

Who was he before he became whatever he is? Three days after the attacks began, we still don't know what he is. An unknown group called Deccan Mujaheddin took credit, but the New York Times reports that American intelligence officials are beginning to suspect Pakistani militant group Lashkar-e-Taiba. Others say they're from Indian Mujaheddin.

We don't know whether it was ideology or the promise of cash that sent young men like him into the attackers' disparate targets: Mumbai's historic CST train station; the Taj hotel, where Bombay's elite gather for cocktails and coffee; the trendy Leopold café, where tourists and Bollywood stars relax; the five-star Oberoi, where diamond merchants make deals and starlets wait to be spotted by gossip columnists; a local Chabad House, where an American rabbi and his wife and several others were killed on Friday.

"These men are not poor and illiterate," Suba Chandra, deputy director at the Institute of Peace and Conflict Studies in New Delhi, told Bloomberg News.  "They are highly motivated youngsters with grievances, real and imagined. There may be more such attacks until we address their grievances and improve intelligence gathering."

A recent study found that Muslims in India, despite having been President and Bollywood stars, tend to make less money and be less educated. But right now, with the smell of carnage still in the air, with smoke billowing out of beloved landmarks, there is little appetite for understanding grievances.

"It's War" headlined the Times of India. "India is Under Attack" said The Hindustan Times. And most ominously, The Telegraph wants no more "crazy initiatives aimed at winning over potential terrorists with love, affirmative action and moral equivalence."

Who is a "potential" terrorist? What is his profile? The unspoken subtext: Which Muslims in India should we treat with fairness, and which should we write off as "potential terrorists?"

Mira Kamdar, author of Planet India, told a webcast organized by the South Asian Journalists Association,  that she worries that the "blunt instrument" way the Indian police round up young Muslim men will leave them even more alienated. Right now, with some top police officers killed in the line of duty, this is not what India wants to hear, especially from Indians living halfway across the world.

Instead, every newspaper is clamoring for centralized intelligence coordination. The scale and efficiency of the Mumbai attacks made it India's 9/11. In response, they say, India needs what America got after 9/11: a PATRIOT Act and a Department of Homeland Security. Almost every newspaper has made much of the way Democrats and Republicans "came together" to pass the PATRIOT act with bipartisan support. Look, say the editorial writers, a Department of Homeland Security works. The U.S. has had no attacks since 9/11, they note.

India had its own homegrown version of the PATRIOT Act. The Prevention of Terrorism Act (POTA) was revoked by the current government when it came to office. Human rights groups had long complained about its potential for abuse. Now revoking POTA could lead to the government's downfall in upcoming elections. Clearly the country's leaders have been inept in their intelligence gathering. Whether POTA could have plugged the holes that led to the attacks is another question.

The issue, says a friend, is these bombings were not just any bombings. India has had bombings before. But those were bombs laid in trains and garbage cans. This was done by men without masks. These happened in coordinated slow motion as if they were meant to be watched on TV – attacks 15 minutes apart. These attacks literally brought terrorism to the doorstep of the opinion makers. It came to the places where they lunch.

Mumbai's resilience has become a cliché. It's survived train bombings, floods, the blasts at the Stock Exchange. But these hotels were the places where the elite feel safe and cocooned. This was Page 3 Bombay, not man-on-the-street Mumbai. "These are the places where what Indians call 'the creamy layer' hang out," says Mira Kamdar. It's their "islands of security" amidst the chaos of South Bombay. "It's the elite of Bombay who are really going to be shaken," says Kamdar.

Shaken, because these young men didn't want to become the elite. They didn't want a place at the table. They wanted to upturn the table.

This is what is unfathomable to many Indians.

On my last trip back to India, I met with an Indian who had come back to New Delhi after many years in America. In 1988, he says, out of the 32 graduates of his class at IIT-Delhi, 26 ended up abroad. "In the latest class there are 60 grads and only two have applied for US scholarships," he told me.

At a time when "new" India is bubbling with optimism, when thousands of Indians are coming back to India, who wouldn't want to be part of that action?

The story of haves and have-nots in India, in South Asia is part of the larger story of the attack on Mumbai. And I don't think it's one that will fall into the purview of any Department of Homeland Security that might get created.

Which brings me to the young men in t-shirts and jeans in plush hotels in South Mumbai.

In a country where every car entering one of the grand new shopping malls has its trunk inspected by uniformed security, how did they know they could walk into the five star hotel with AK-47s and grenades?

In the hushed glamour of the Taj with its 24-hour coffee shops, a Louis Vuitton store and golden luggage carts, did they walk in through the front door, past the liveried doorman like they belonged?

Did they stride into the dining room of the Oberoi like they wanted a table – dinner for three, we have no reservations.

Some might have even been working at the hotels, since they apparently knew its layout very well. At least 30 members of the staff at the Taj, including all 17 stationed at the reception desk were killed. Another dozen staff members died at the Oberoi. Guests who escaped praised the staff's bravery at both hotels.

I don't know who the young man in the Versace t-shirt was. But I can't shake his image – a gunman in five-star Mumbai.

He might be an Islamic militant from Pakistan or Britain. He might be a frustrated small city boy shut out of the IT economy. He might be a village boy who trained in a terror camp somewhere.

Whatever his motive, his message was loud and clear.

Pay attention to me, he and his young partners said to booming India.

And then these mysterious young men pulled the trigger.

(A version of this story appeared at newamericanmedia.org.)