What should Bill Clinton do now?

Critics worry he'll get in Hillary's way. But the new secretary of state's husband is a great international ambassador for America. 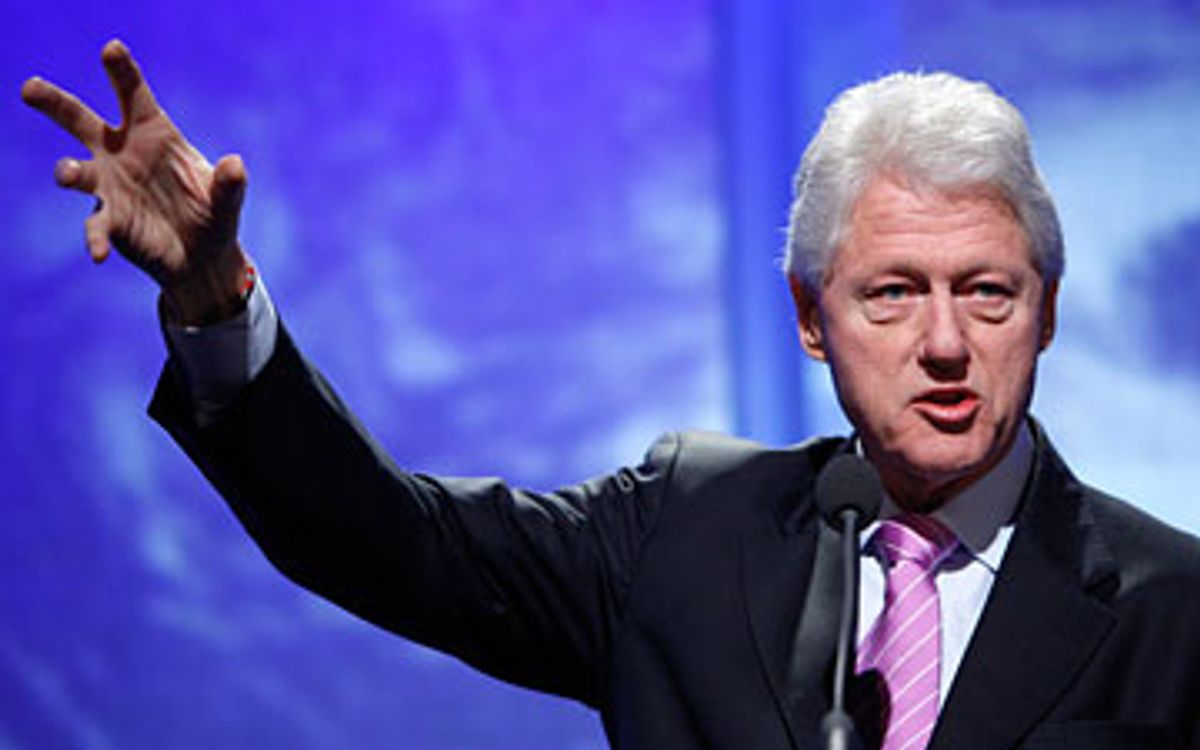 Up until the very moment on Monday morning that Barack Obama turned to Hillary Clinton, his "dear friend," and officially declared his intention to nominate her for secretary of state, the national press corps has promoted the notion that Bill Clinton could (or should) be a problem. The mounting speculation over her future created dramatic tension for which the Clintons themselves, of course, got most of the blame, while new concerns over the possible conflicts between his philanthropy and her diplomacy seemed to emerge every day.

Wouldn't his fundraising and speechmaking somehow embarrass her and the new president? Wouldn't the relationships between his foundation and various foreign governments somehow compromise her and the Obama administration? Wouldn't reporters find among the donors to his foundation some shadowy figure whose taint would ruin her nomination?

In a word, no -- or, at least, not so far. At the behest of the Obama transition team, co-chaired by his former chief of staff John Podesta, the former president has agreed to release the names of more than 200,000 donors to his foundation. Presumably the president-elect's attorneys have reviewed the largest and most significant donors and determined that none of them poses an obstacle to the Clinton nomination.

To minimize any real conflicts, meanwhile, Bill Clinton also agreed to certain limitations on his future activities. The Clinton Global Initiative -- his enormous international effort to coordinate citizen and corporate activism against disease, poverty, ethnic conflict and climate change -- will be reincorporated separately from his foundation. The Global Initiative will also host no further conferences in foreign countries like the one that is taking place this week in Hong Kong.

The reasoning behind those restrictions seems obscure compared with the more straightforward limits placed on his paid speeches. It makes sense to ask him to forgo payments from the Kuwaiti royal family and other foreign entities. And it makes similar sense to seek transparency in his foundation's relationships with foreign governments and large donors.

What would not make sense, however, is to hobble Bill Clinton's role as a global citizen, which ought to be used by the Obama administration to advance its own vision of American leadership in the world. His capacity to mobilize political, corporate and civic forces on behalf of benign objectives -- and his influence over officials around the world -- exemplifies the "soft power" that is supposed to become the new paradigm of our diplomacy.

Indeed, the emphasis on soft-power diplomacy is what connects Obama's choices for his national security Cabinet, from Hillary Clinton and Susan Rice, the nominee for U.N. ambassador, to Bob Gates, the Bush holdover at Defense, and retired Marine Gen. James Jones as national security advisor. All of them have indicated support for the president-elect's vision of a revitalized foreign policy that relies upon communication, trade, aid and persuasion -- but does not refrain from using force as a last resort when American security interests are threatened. And all of them have argued, at one time or another, that the real threats to American national interest are equally rooted in underdevelopment, disease, climate change and ethnic conflict as in the military ambitions of rival powers and the lethal mania of terrorists.

The question of how to organize a global civil society to combat those problems is precisely what has preoccupied Bill Clinton for the past several years, and he has come a fair distance in addressing them. Building his campaign against HIV/AIDS and malaria in the less developed countries of Africa, Asia and Latin America, he has built relationships of trust with leaders around the world.

Those connections raised yet another red flag for those who doubted the wisdom of his wife's nomination -- namely the concern that he might start "freelancing" in foreign affairs in ways that hinder or contradict official U.S. policy. Sen. Richard Lugar, the Indiana Republican who has served as an Obama mentor on the Senate Foreign Relations Committee, mentioned such concerns even as he promised to confirm Hillary as secretary of state.

Yet while Bill Clinton has met regularly with prime ministers, presidents and foreign ministers in scores of nations everywhere on the planet over the past eight years -- including the Chinese foreign minister, for instance, whom he saw this week -- his critics cannot name a single instance when he embarrassed the Bush administration on foreign soil. Although he disagreed with President Bush on almost every major issue, Clinton regularly kept the State Department informed of his activities, speeches and contacts abroad.

The restrictions that have come with his wife's ascent may limit his income, but, as he likes to say, he is already rich enough. Otherwise, he will continue to do what he does, with very few substantive changes, and that is all to the good. During the darkest moments of the Bush years, when U.S. prestige had sunk to unprecedented depths, his work for development and against disease stood for a better America in the eyes of millions around the world. He is certainly not a liability, as his critics in the Washington punditocracy still insist. For a new administration with a visionary outlook, he could instead become an important asset.