Uncle Sam needs to go shopping. Not us

You want that discounted flat-screen TV. You want to help boost the economy. But I've got news for you. 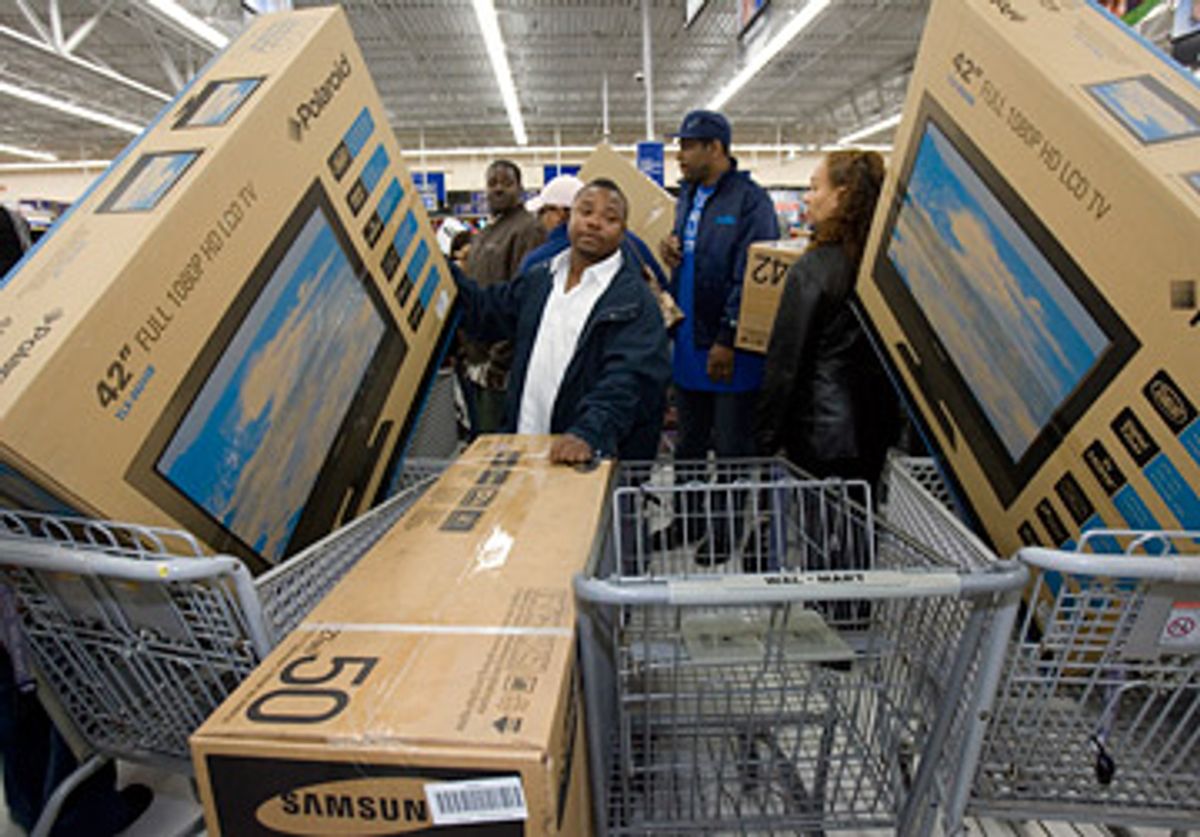 When confronted with the news that Wal-Mart shoppers were so eager to take advantage of a Black Friday sale that they trampled an employee to death, most people are, quite naturally, appalled. My daughter, for example, was aghast: "What kind of country do we live in?" she asked, over and over again, unable to fully process the horror.

I have an answer to her query, but it is unlikely to satisfy her: We are a country that is supposedly desperately in need of more shoppers. Consumer spending makes up 70 percent of the economy, and consumer spending is  undergoing a sharp, economically destabilizing decline. The less we shop, the worse it gets. No shoppers equals declining profits for businesses equals layoffs equals even fewer Americans with the wherewithal to shop. And so on. This vicious circle has led some observers to declare that shopping is an act of patriotism. Who can forget George Bush encouraging Americans to shop after 9/11? Ask not what your country can do for you, but what you can shop for your country!

One can even make the case that the Wal-Mart shoppers were especially rational consumers. Prices are absurdly low for a vast array of consumer items right now, and when money is tight, taking advantage of discounted offerings is not only prudent but a two-fer! Good for the economy and good for your pocketbook.

Seen from this light, the Wal-Mart stampede, while horrible and obscene in its localized impact, might also seem to be exactly what the entire economy needs. And come on -- the carnage is easily avoidable; just do your stampeding online. Give Santa a hand: Christmas is just three weeks away, and your friends and relatives aren't the only ones lusting after a present -- so is the U.S. economy!

But before you click that buy button, here are a few things to think about. First, it's not clear that snapping up discounted flat-screen TVs does anyone much good. Although retailers attempted to make hay out of numbers that showed Thanksgiving shoppers spent more this year than last year, several analysts pointed out, in their best Grinch fashion, that there isn't much profit to be gained for retailers when prices are cut low enough to entice shoppers in a foul economy. Second, when an economy is in free fall, the truly rational individual decision is to save, pay off your debts and hunker down till the storm blows over. Even if you are debt-free and cash-rich right now, it still might not make much sense to be a red-white-and-blue shopping maniac. All indications are that next year will be worse than this year, and you're going to feel pretty stupid if you do your part for the national economy this Christmas, and then find yourself laid off in January. Third: Suppose Americans do rush to the mall or Amazon.com this Christmas -- it's still unlikely that they will be able to effectively counteract the current recessionary headwinds. The numbers are just too bad. We are living through no ordinary business cycle downturn -- this has the potential to be the worst recession most of us have encountered in our lives. A reckoning is at hand.

There's only one shopper with a purse large enough to make a difference in this kind of mess -- and that's the U.S. government. It's time for Uncle Sam to go to the mall.

On Sunday, the New York Times' Louis Uchitelle laid out the numbers. The best guess is that the economy is currently contracting at a rate of 4 percent per quarter. (UPDATE -- I bungled this, the 4 percent is per year, not quarter.)  (It could be worse. I've seen some estimates that go as high as 7 percent.) Uchitelle reports that "offsetting that contraction requires a federal infusion of at least $400 billion."

Just for fun, try dividing $400 billion by the roughly 300 million population of the United States. It comes out to about $1,333. If every man, woman and child spent $1,333 dollars above and beyond what they are currently spending, we could, maybe, pull the economy back up to zero growth. But, of course, it's ridiculous to imagine every American having the cash to go on a spending spree like that. We got into this whole mess by using cash extracted from wildly appreciating home equity valuations to buy whatever we needed or wanted, from healthcare to a new SUV to a second home. That's gone. For American consumers to buy $400 billion worth of goods now would require maxing out a ton of credit cards, and digging themselves even deeper into debt at a time when credit card companies are raising interest rates as fast they can.

But let's suppose you are not underwater on your mortgage, you don't have any credit card debt, you're gainfully employed, and you are staring at a $499 price tag for a 32-inch flat screen HDTV from Sony? Where's the harm in a little consumer gratification that might lend a helping hand, however pitiful, to the larger economy -- if you can afford it?

Doesn't that decision depend on just how bad you think things will get in the future? Right now, the U.S. economy is shedding about 250,000 jobs a month. That number will undoubtedly go up. Are you really so confident that your earning power next year is secure enough that you can blithely ignore a blistering recession? Remember, purchasing discounted consumer electronics isn't going to help out the larger economy that much. What this economy really needs is for Americans to start buying fully tricked-out Chevy Tahoes and Ford Expeditions again. And that's just not going to happen in the near future, for a variety of reasons, chief among them: You'd have to be friggin' crazy to think that buying an expensive car right now is a smart economic decision, no matter how low the price of gas gets.

But then we get smacked in the face again by the paradox of the American economy. All those individual Americans making smart economic decisions have brought the economy to a grinding halt. The smarter we are, the worse it gets.

It sure seems like the current predicament is a case where a reliance on free-market economics built on individuals' exercising rational choice breaks down. Doing what seems best for the individual is sending an ailing economy spiraling down to the hospice. But to jump-start the economy, we're asking everyone to go out and spend their cash at exactly the time when it seems most sensible to stuff it under the mattress.

Cue the federal government. Since it is government's responsibility to take care of the collective, the government is the only actor in the economy that can make the rational decision to spend hundreds of billions of dollars creating jobs and giving individual Americans the necessary confidence, and foundational support, to be active consumers once again. And that doesn't mean another round of tax breaks, which most of us will use to pay off our credit card debt or sock away in savings accounts. It means buying bridges and roads and public transportation systems and schools and hospitals and alternative energy plants and whatever else seems to make sound infrastructural sense.

Yes, we do need a shopping stampede -- but in Washington, not Wal-Mart.