The buck stops where?

Our delusional president laments the "intelligence failure" that identified nonexistent WMD in Iraq and admits he was "unprepared" for war. 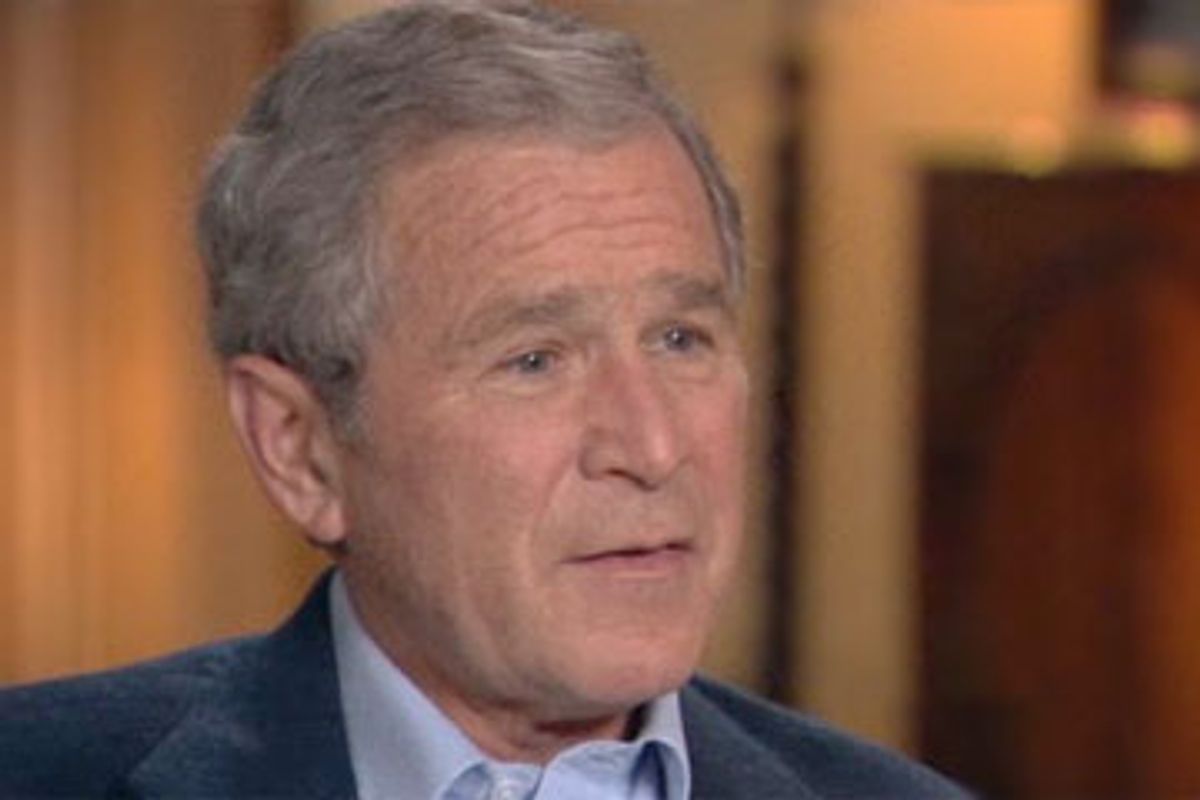 I haven't written about President Bush for quite a while. I prefer to look toward the future. But his delusional exit interview with ABC's Charles Gibson made me pay attention again.

When Gibson asked Bush what he was "unprepared for" when he became president, Bush gave this rather stunning answer.

"Well, I think I was unprepared for war. I didn't campaign and say, 'Please vote for me, I'll be able to handle an attack.'"

What an odd, self-pitying outbreak of candor for this strange president. I'm not sure how anyone could run for president and be "unprepared" for war. The job includes the title of commander in chief of the armed forces. It's true, though, that Bush didn't campaign as someone who would quickly start two wars, and commit the U.S. to a belligerent and reckless policy of unilateral preemptive attacks on our enemies based on perceived threats, not hostile actions (that's the "Bush doctrine," in case you're reading, Sarah Palin).

This was a man who warned against nation building during the 2000 campaign, who said our foreign policy must be "humble," who seemed opposed to the Clinton administration's interventionist foreign policy whether in partly humanitarian missions like Bosnia, or defensive strikes against Saddam Hussein in Iraq or Osama bin Laden in Sudan. Few people who voted for Bush thought he was gunning to be a war president, based on his campaign rhetoric, so it was an incredible bait-and-switch when he became one. In retrospect, though, it seems clear that he arrived in the White House surrounded by Dick Cheney, Donald Rumsfeld and other twisted neocons who were determined to topple Saddam Hussein given any excuse, or none at all.

Certainly the president was being candid in another quite concrete way: He was woefully unprepared for the Iraq war, invading with inadequate planning for the occupation and rebuilding that had to follow the fall of Saddam. Almost 5,000 Americans, and an unknown but much larger number of Iraqi civilians, have died thanks to his lack of preparation. History will prove him right on that score, but it won't be kind to him.

Bush made a second stunning admission in his interview with Gibson. "The biggest regret of all the presidency has to have been the intelligence failure in Iraq," he said. "A lot of people put their reputations on the line and said the weapons of mass destruction is a reason to remove Saddam Hussein. It wasn't just people in my administration; a lot of members in Congress, prior to my arrival in Washington, D.C., during the debate on Iraq, a lot of leaders of nations around the world were all looking at the same intelligence. And, you know, that's not a do-over, but I wish the intelligence had been different, I guess."

What a cowardly, buck-passing answer. It was his administration that was responsible for the faulty intelligence; his administration that notoriously "stove-piped" the available evidence to make the case for war, ignoring all facts that contradicted the neocons' theories, crushing any dissent in the Pentagon and intelligence establishment. His administration then sold that corrupt evidence to Congress and browbeat members into authorizing the use of military force on the eve of the 2002 midterm election, by depicting them as traitors and sissies if they raised questions. Now Bush is trying to say he was misled by the "failure" of his own intelligence leaders and Cabinet advisors? What a loser.

One last related distortion was Bush's lamenting that he hadn't changed the political tone in Washington. "9/11 unified the country, and that was a moment where Washington decided to work together. I think one of the big disappointments of the presidency has been the fact that the tone in Washington got worse, not better."

But it was the Bush administration that changed the tone. On the heels of a brief bipartisan moment after 9/11, Karl Rove and others began laying the groundwork for a 2002 midterm campaign that would use the terror attacks against Democrats, and make sure that anyone who didn't support Bush's military and intelligence policies was smeared as being on the side of al-Qaida. Like the war and the intelligence failure, Bush bears personal responsibility for the ugly tone during his administration, but once again, the buck stops somewhere else.

Bush brags to Gibson that he's proud that "I didn't sell my soul for politics" during the eight years of the presidency. If that's true, it's only because he sold it a long time ago.

Update: In letters, several readers note an additional falsehood in Bush's interview: His claim that we "had to" invade Iraq because Saddam wouldn't let weapons inspectors in. Of course, Hans Blix and his team had gone into Iraq in late 2002 for the first time since 1998, and found no evidence of WMDs. In March, 2003, Bush demanded they leave before they completed their work so he could commence the invasion. Robert Parry recounts the sequence of events here.  "Had we had a few months more [of inspections before the war], we would have been able to tell both the CIA and others that there were no weapons of mass destruction [at] all the sites that they had given to us," Blix told the Associated Press in 2004.