Bargain gifts for the cat lover

Swishing feathers, a tempting tunnel and other simple pleasures to make kitties purr. 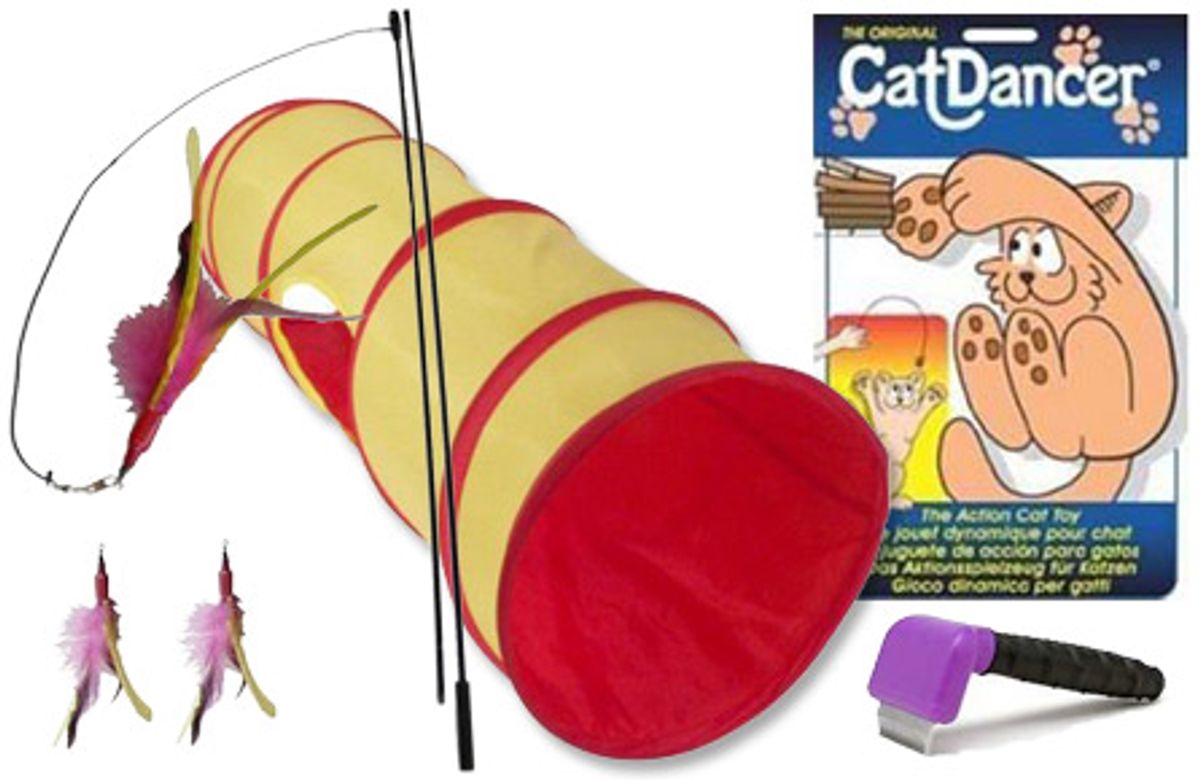 Who are we kidding with fancy-schmancy cat toys? Fluffy doesn't want your Swarovski collar or precious little postmodern kitty condo that looks like an itty-bitty spaceship created by Eero Saarinen for cocktails on Saturn. He doesn't want that little mouse made out of nubby organic cotton. Yeah, he'll play with it, but he'd be happier with a brown paper bag. And he'd be really happy if you dropped a real mouse inside that bag, which he could then attack and torture endlessly before depositing its lifeless body, gratefully, on your pillow.  People buy extravagant cat toys for themselves. While Fluffy may sleep in that spaceship (though he prefers the bathroom sink), the owners really bought it because of the way it perfectly blends with their minimalist decor and polished sensibility. The really great cat gift is a blend -- something that will stimulate and excite your pet, and fit your lifestyle, too. Which means that somewhere between the gray shag-carpet cat tree Fluffy would die for and the Limoges cat dish you covet is a range of smart choices that will make both of you happy.

Cats (like dogs) naturally recognize socks as their native prey. They like to stalk them when they're discarded on the floor. They like to attack them with great zeal when you're trying to pull them on your feet, as if the sock were actually trying to consume your foot, and your cat is your only chance for escape. So grab some orphaned socks ($11) and stick one or two inside  the other. (Bonus: Pour in some catnip from one of those precious catnip toys he ripped apart in no time.) Knot the sock at the end, then wiggle it around like a live snake. Cats go bonkers.

If the Cat Dancer ($1.59) remains the greatest cat toy every created (and it does), Da Bird ($10.98) comes close. Like the Cat Dancer, Da Bird's premise is pretty simple: feathers tied to a string, tied to a wand. The key innovation is the little ball joint at the tip where the feathers fasten to the string. When you wave the feathers through the air they flicker and twirl unevenly, and give off the irresistible fluttering sound, just like a real bird. Buy one, and get a replacement pack because you'll need it.

The CrackleChute ($13.22 and up) shrewdly apes the magic of the brown paper bag -- each pad through this little cat tunnel creates a small pop and crackle, making it a maze of excitement. It also can provide needed sanctuary -- with our cat, Lucas, the CrackleChute is a sort of Switzerland where he knows he will be completely left alone. The CrackleChute also easily rolls up so it can be thrown under a bed or on top of a wardrobe -- important, because the crackling can get a little annoying, especially if you're trying to sleep nearby.

Everyone who has one seems to swear by the magic of the FURminator ($18.22). They'll even claim that their pets love it. Now that I sincerely doubt. While some cats like the occasional stroke of the brush, the FURminator targets the pet's soft, downy undercoat, and it's a more intense brush than most are used to. But it does do wonders. And because it's so effective, it allows you to brush your cat a lot less often -- which is something you both can probably be happy about. (Warning: Be careful not to use it too vigorously, especially with short-hair cats. Remove too much hair, especially during the winter, and you're going to have one miserable cat on your hands.)