Help her, Obi-Wan! Carrie Fisher's memoir of her life as a "Star Wars" icon and poster child for rehab and mental illness will likely make you laugh -- and cry. 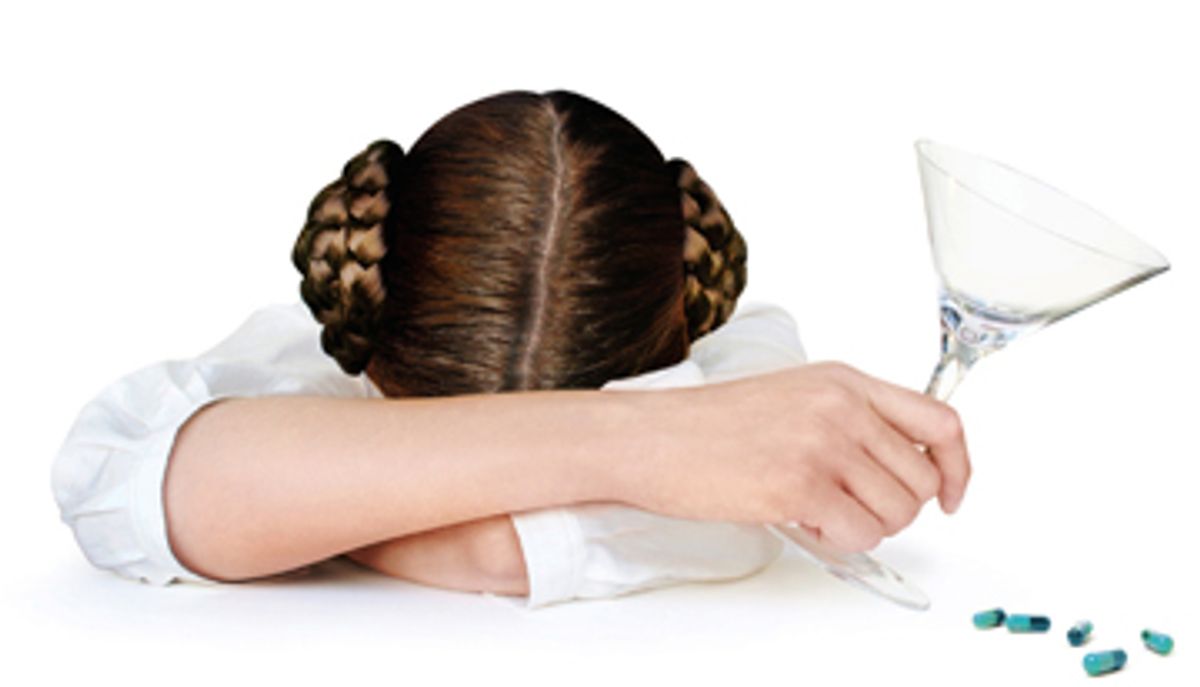 When most adult Americans say, "I grew up with Carrie Fisher," they probably mean that they grew up with Princess Leia, secret Skywalker and metal bikini-clad royalty from the former planet of Alderaan. In her new book, "Wishful Drinking," Fisher recalls the man who approached her in a store to inform her unabashedly that he thought about her "four times a day" from the time he was 12 to the time he was 22. In Fisher's typically arid appraisal of this encounter, she chides herself for not asking, "What happened at twenty-two?"

So, yes, Fisher's reputation, which was first made when she was a toddler whose father, Eddie Fisher, left her mother, Debbie Reynolds, for a grieving Elizabeth Taylor, rests largely now on her role as space-aged geek goddess, or her later identity as a poster child for bipolar disorder and drug addiction.

But for me, Fisher will always be an author, whose clutch of novels helped shepherd me through adolescence, showing me, with teeming neurotic energy, what it might be like to grow into a woman with a hell of a lot on her mind.

Fisher's fictional oeuvre was built on a precarious arc of sanity; it is itself a miniature work of manic art, starting in 1987 (when Fisher was 31) with "Postcards From the Edge," a splashy, starry rehab roman à clef with a hefty dose of mother-daughter showbiz tsuris. Then came 1990's neurotic romance-stalker book about the end of a difficult marriage, "Surrender the Pink," written with dizzy confidence and flair. Fisher followed that with a loopier, baffling pregnancy novel, "Delusions of Grandma," in 1993. Most recently, after an 11-year writing pause, came "The Best Awful," a chronicle of mental illness whose patchy construction told readers more about the author's emotional state than the plot did.

Fisher is a language obsessive, a nimble verbal acrobat who puns and somersaults around a page with glee. She also casts a crinkled, laughing eye on every occasion, opening her first book with the line, "Maybe I shouldn't have given the guy who pumped my stomach my phone number, but who cares, my life is over anyway." In "Surrender the Pink," her heroine Dinah walks the streets of New York with a friend during a mega-blizzard, accepting a ride from a stranger by saying, with jolly self-awareness, "Welcome to our anecdote!" Distance from the narrative of her own life, and the lives of her characters, which characterizes much of her fiction, perhaps is symptomatic of something more troubling that is summed up in the last line of "Surrender the Pink": "Nothing's ever really over. Just over there."

What made Fisher's books so appealing to me as a teenager was the way she used that critical distance from herself to dump the contents of her head and heart on a table and perform a cool, caustic, curious dissection of what was knocking around inside.

It was oddly reassuring that, despite the exceptional circumstances of her life -- the celebrity parents, the Hollywood upbringing, her fame as Princess Leia -- Fisher drew characters who were familiar and recognizable to a confused teenage girl, whose own brain burbled with anxiety and ambition and self-doubt and some good-humored cynicism. Fisher was a movie star who nevertheless wrote about women flummoxed by sex; and though she regularly circulated at Hollywood dinner parties, she could perfectly describe the muddy embarrassment of social ineptitude.

Perhaps because I came to her early, with the devotion of an adolescent reader, I assumed I would follow Fisher anywhere. But as her work has progressed further and further into bipolarity and addiction, I have had to ask: Would I follow her over the precipice?

No, as it turns out, I wouldn't. Or can't. Or don't want to. "Wishful Drinking," the adaptation of Fisher's recent one-woman show about her tipsy-turvy life, is her first foray into official nonfiction, and it retreads much of the terrain she's already covered in her novels. If you are a fan of Fisher's fiction, a follower of her mental illness or simply a looky-loo stargazer curious about her Hollywood heritage, "Wishful Drinking" will likely make you laugh. But it may also make you deeply sad.

All of Fisher's novels have contained the obvious dental records of her life: There is her Hollywood pedigree, her absent father and wackadoo mother, her alcoholism and drug addictions, her intense relationship with ex-husband Paul Simon, her flimsy career as an actress, her baby with super-agent Bryan Lourd, who left her for a man, and, more recently, as she puts it, her "exclusive invitation to the mental institution," all dressed up in barely there fictional guises.

In "Wishful Drinking," Fisher dispenses with any pretense about mining her own veins for material. "I heard someone once say that we're only as sick as our secrets," she writes. "If that's true, then this book will go a long way to rendering me amazingly well."

The initial structural conceit of the book is that thanks to her recent bouts of electroconvulsive treatment (for the crippling depression and bipolarity) she is merely a bystander to her own life, in a state of continual surprise as portions of her own startling existence come back to her. According to the book, her answering machine message goes, "Hello and welcome to Carrie's voice mail. Due to recent Electro Convulsive Therapy, please pay close attention to the following options. Leave your name, number and a brief history as to how Carrie knows you, and she'll get back to you if this jogs what's left of her memory." Har.

One chapter is a very funny recap of her parents' famous split, which she describes as a Brad-Jen-Angelina triangle from Hollywood's Paleozoic era. In Fisher's retailing, her father, upon learning of the death of family friend Mike Todd in a plane crash, rushed to comfort Todd's widow, Elizabeth Taylor. "My father flew to Elizabeth's side, gradually making his way slowly to her front. He first dried her eyes with his handkerchief, then he consoled her with flowers, and he ultimately consoled her with his penis." Fisher provides a useful chart, detailing her gnarled, oft-pruned family tree, and rebuts her father's assertion from his memoir "Been There, Done That" (or, as his daughter calls it, his "novel," "Been There, Done Them") that the frequently married Debbie Reynolds is a lesbian. "My mother is not a lesbian," writes Fisher. "She's just a really, really bad heterosexual."

Fisher also opens a small artery in her descriptions of her long relationship and short marriage to Paul Simon, of whom she notes, "How can you not love someone who writes 'medicine is magical/ and magical is art/ think of the boy in the bubble/ and the baby with the baboon's heart?' The answer for me was I couldn't. I couldn't not love him. I apprenticed myself to the best in him and bickered with the worst."

It was safe to enjoy Fisher's novels, to romanticize her neurosis and pretend it was the same as mine, because those books were fiction -- they were fun, they were fresh. But there's no way around the fact that when it's all thrown at you as fact, and often as repetitive, rambling fact, it's distressing. Distressing in large part because it's clear -- as it's always been clear -- that even when she is out of control, even when she's revealing way too much to her readers, even when she's repeating herself and skating in verbal circles that used to be much tighter and more concentric, on some level, Fisher knows how sick she is and wants us to see it ... all of it. There is a line of Paul Simon's that she quotes in the book, written in part about her, "From what I can see of the people like me/ We get better but we never get well."

As Fisher has continued to not get well, the quality of her writing has not gotten any better. When she goes off the rails, the window on Fisher's brain shows us not an inner life that is complicated and frank and funny and all churned up, but instead one that is more than lightly scrambled, by mental illness or drugs or ECT, it is impossible to tell.

Perhaps "Wishful Drinking's" biggest disappointment, for those of us who have long loved Fisher's writing, is the relentless focus on Fisher's "Star Wars" identity, her Hollywood family, her encounters with famous family friends like Cary Grant. Instead of pushing aside the twinkling craziness of her outside life to meaningfully reveal the crazy on the inside, as she has always done so well, Fisher is now gathering all the starry stuff around her for comfort and reassurance about who she is and what she means. It's as if, in becoming a post-electroshock bystander to her life, Fisher has actually found herself standing in line for a midnight showing of "The Empire Strikes Back."

There is a troubling but knee-slapping moment in the book in which Fisher describes how someone told her that she is actually in the "Abnormal Psychology" textbook. "Obviously, my family is so proud," she writes. "I'm a PEZ dispenser and I'm in the Abnormal Psychology textbook. Who says you can't have it all?" It's funny, until she does the big reveal. "Recently I found the picture, and rather than describing it to you, would you like to see it? Because I really want to show it to you." Below is the image of a page from the science textbook. At the start of Chapter 3, "The Biology of Bipolar Disorder," there is a facing illustration: It's of Princess Leia, her hair in side buns.

It's a theme that she repeats in the saddest funny, the best awful of her book: When she writes, "I tell my younger friends that one day they'll be at a bar playing pool and they'll look up at the television set and there will be a picture of Princess Leia with two dates underneath, and they'll say, 'awww -- she said that would happen.'"

Maybe that's true. It's terrible that Fisher is smart enough to realize it, but I guess it's wonderful that she thinks it's hilarious.