The decline and fall of General Motors

Shockingly low gas prices can't save G.M., and its own restructuring plan doesn't boost confidence. The next bailout should be a government-administered bankruptcy. 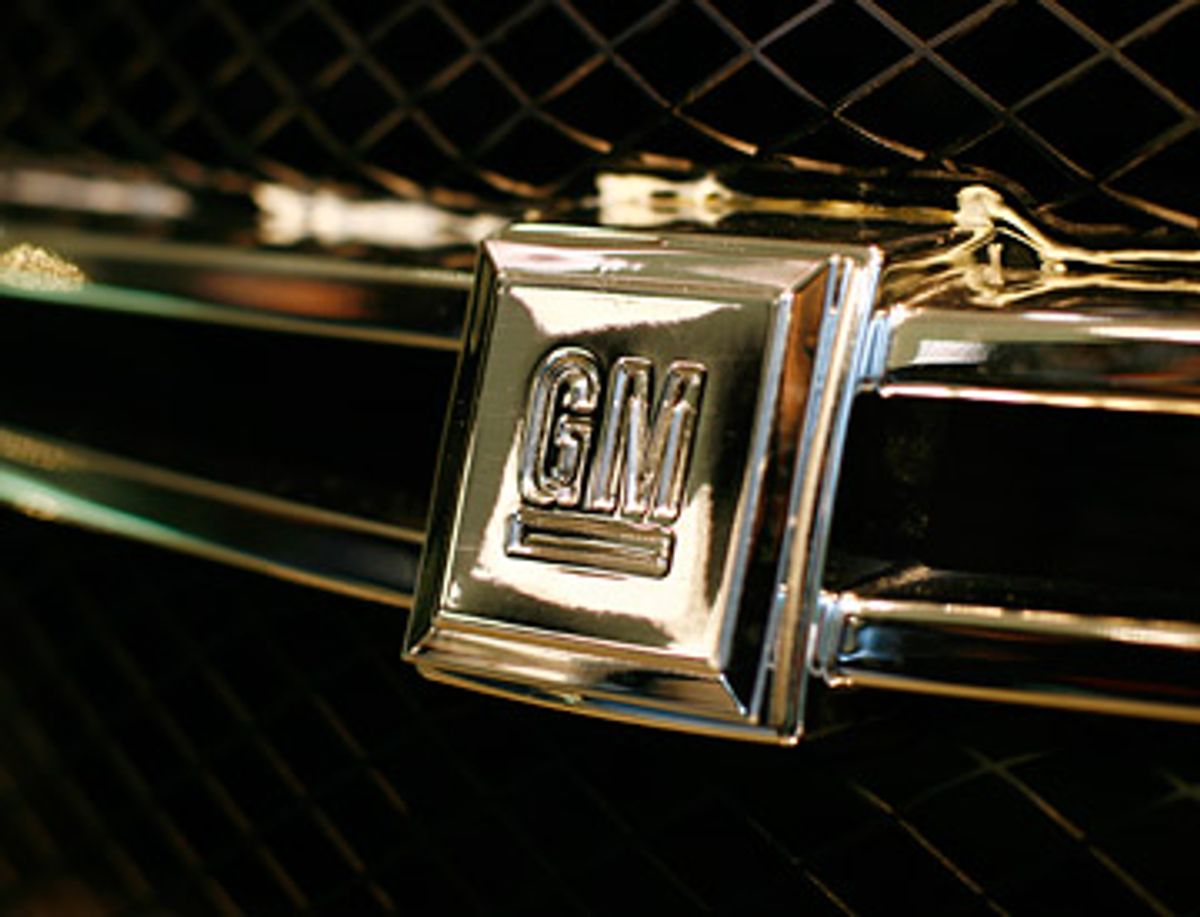 Riding my bicycle last night through Oakland, I almost veered off the road when I saw a gas station advertising $1.86 a gallon for regular unleaded. I always assumed that a severe economic downturn would pummel oil prices and delay the advent of peak oil, but I have to concede that I never thought I would see gasoline for under $2 a gallon in California again in my life. The price of crude oil to be delivered in January on the New York Mercantile Exchange, as of this writing, is $47.47, a full hundred dollars a barrel lower than it was in July! As energy analyst Geoffrey Styles noted on Monday, "Oil remains a cyclical business, as anyone who's been around it for a while understands, but this is ridiculous."

Even so, low gas prices have done absolutely nothing for American automaker profitability. Whether this is because consumers are smart enough to realize that during the lifetime of whatever car they purchase right now, gas prices will inevitably surge back up again, or whether it's simply, as the auto industry claims, a result of a cratering economy, there is no getting around the reality that the November sales figures, as economist James Hamilton documents, are extraordinarily bad:

I was running out of vocabulary last month to describe just how bad October was for the domestic automakers. But whatever you want to say about October, November was significantly worse.

When I first saw the figure for November sales of cars manufactured in North America -- 236,000 units -- I thought maybe somebody had mistyped the first digit. Even 336,000 would have been a very bad month. But 236,000 is 17 percent below the dreadful October figure and 40 percent below the number sold in November of 2007.

In 2007, Hamilton adds, G.M. recorded a loss of $37 billion -- and that was before the bottom dropped out of the economy. This year looks to be considerably worse. In the restructuring plan G.M. presented to Congress on Tuesday, G.M. also declared: "The company's balance sheet ... includes a ($60) billion negative net worth position at September 30, 2008." By any standard, that's a pretty big hole to dig yourself out of. I am inclined to believe G.M.'s execs when they say that without help, they cannot remain a going concern.

G.M. says it needs $4 billion this month to keep going and another $4 billion in January. And that's just for starters. In return for all the cash, the company promises that it will accelerate development of fuel-efficient cars, trim the number of brands it produces, and extract cost-cutting sacrifices from all of its stakeholders. (Already, the UAW is promising concessions from labor.)

(You can read the plan here, and a sharp summary from Time's Justin Fox here. My favorite part: G.M.'s promise to "immediately" cease "all corporate aircraft operations, unfortunately impacting approximately 50 hourly and salaried employees." Translation: All those mean comments from politicians about CEOs flying their jets from Detroit to Washington are going to mean we have to lay off a bunch of pilots and airplane mechanics.)

But what do we make of this? "With Federal support, GM will invest significantly in reinventing the automobile, with special emphasis on fuel efficiency, energy independence, and reductions in greenhouse gas emissions." (Sounds kind of like G.M. is asking to be made a subsidiary of the Sierra Club, doesn't it?)

Better late than never? Frankly, I don't think such promises mean anything, absent rigorous government control and requirements. G.M. asks for the creation of an oversight board, but that's thin gruel. The sales figures, the state of the economy, the strategic errors Detroit has made over the years all add up to a pretty compelling conclusion. There's no way out for the Big Three as currently constituted, and depending on management beholden to shareholders, as Felix Salmon argues this morning, is a fool's game. I do believe that simply allowing the companies to collapse would be an unbearable body blow to the current U.S. economy, but I have joined the ranks of those who don't trust Detroit to fix itself, no matter how much the feds loan the car manufacturers. It's time for a government-administered Chapter 11 bankruptcy that fundamentally restructures the American auto industry.

But of course General Motors says in its own restructuring plan that bankruptcy is absolutely, positively not an option because of the "stigma" such an action would incur "in the eyes of consumers."

On this latter point, it cannot be emphasized strongly enough how much a bankruptcy will depress sales of an auto manufacturer's products due to consumer fears of long-term warranty, resale value and service-related issues.

Earth to G.M.: No one is buying your cars right now! Your business is kaput. How much more stigma can bankruptcy add than your own mismanagement has already spawned?