The White House censored her subversive Christmas tree ornament -- only to spread its anti-Bush cheer. 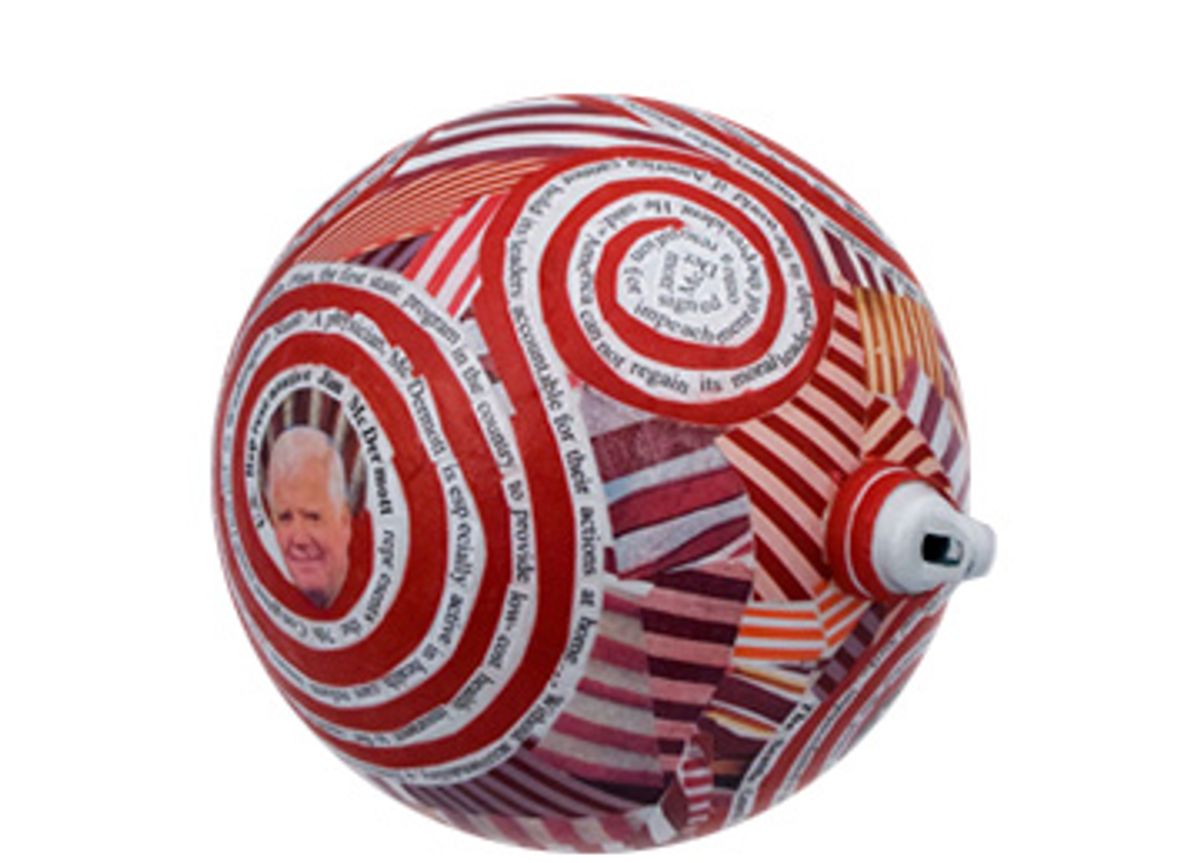 Seattle artist Deborah Lawrence says she is crestfallen that the ornament she was commissioned to design for the White House Christmas tree will not be displayed. But then again, she always suspected the "ornament might not be met with full enthusiasm."

A mixed-media artist whose work is charged by politics, Lawrence, 55, striped a silver bulb with a swirl of tiny text from a resolution to impeach Bush. "America cannot regain its moral leadership in the world if America cannot hold its leaders accountable for their actions at home," the text reads. "Without accountability, a Democracy will fail."

As one of over 350 artists asked to create a Christmas ornament, Lawrence submitted her work to a White House office this October. She never heard a word of criticism. Along with the other artists, she was invited by Laura Bush to attend a White House reception on Tuesday afternoon, Dec. 2.

On Monday, Lawrence gave an interview to Washington Post gossip columnist Roxanne Roberts, revealing her political handiwork. Lawrence was not supposed to talk about the ornament publicly until Laura Bush revealed the "secret theme" of the ornaments -- the colors of the flag -- at the Tuesday afternoon reception. But she didn't explicitly ask that the interview not be published. "I guess I was naïve," Lawrence says. On Tuesday morning, her interview hit the Post newsstands.

After a little morning reading, and a close look at the ornament, Laura Bush apparently found it lacking the Christmas spirit. "It's inappropriate and it's not being hung," Sally McDonough, a spokeswoman for the first lady, told the Post on Tuesday afternoon. "We reviewed the ornament along with all the [other] ornaments, and Mrs. Bush deemed it inappropriate for the holiday tree."

Lawrence nevertheless was welcomed at the reception in the White House's Blue Room. She posed for a photograph by the tree with her fellow artists, listened patiently as Laura Bush gave a talk about compassion, and gladly explained to artists why they couldn't find her ornament on the tree. "It was a lovely afternoon," she says.

Lawrence was actually flummoxed when she first got the commission this summer. "I had an immediate, convulsive reaction to the request," she says. "Why would I want to put a smiley face of tacit approval on an administration famous for lies, greed, warmongering and religious fundamentalism?"

After all, on the cover of her 2008 book, "Dee Dee Does Utopia," Lawrence depicts a scrawny George W. Bush spoon-feeding the word "FEAR" down the throat of a woman shown in silhouette. The president stands atop a pedestal inscribed with a quote from Nazi Reischmarschall Hermann Goering, in which Hitler's deputy notes how easy it is for leaders to fool their people into supporting a war.

In fact, Lawrence was tapped for the honor by Washington state congressman Jim McDermott, a staunch anti-war liberal who advocated Bush's impeachment. Each year, certain members of Congress are invited to pick artists for the tree, and when McDermott asked a local arts organization, 4culture, for ideas, Lawrence's name came up.

To return the favor, Lawrence, whose political work has been shown at galleries across the country, including a recent show at the Lincoln Center, offered a written homage to McDermott on the ornament: "McDermott was attacked for predicting that no WMDs would be found in Iraq, and he was correct."

Along with the impeachment resolution, Lawrence noted moments of civil disobedience and activism in Washington state: the 1919 Seattle General Strike, in which 65,000 workers walked off the job, and the 1999 WTO protests. McDermott's office told the Associated Press that the congressman had "no role whatever" in the ornament's theme and design.

In past years, White House ornaments have tended to be cloying balls of patriotism. For instance, 2007's secret theme was an homage to the national park system. But the White House Christmas tree does have a history of controversy. In 1972, the Nixon administration was lambasted for topping its tree with the atomic symbol of peace instead of the traditional star. And in 1995, the Clinton administration refused to censor an ornament depicting Newt Gingrich's stocking filled with lumps of coal.

The White House may have dumped Lawrence's ornament like a lump of coal. But censoring it only spread its anti-Bush cheer. "My original intention was to make a statement," Lawrence says. "I felt like I needed to register my feelings about this administration. And I got a really great chance to do it."