Why the stories about Obama's birth certificate will never die

Barack Obama was, without question, born in the U.S., and he is eligible to be president, but experts on conspiracy theories say that won't ever matter to those who believe otherwise. 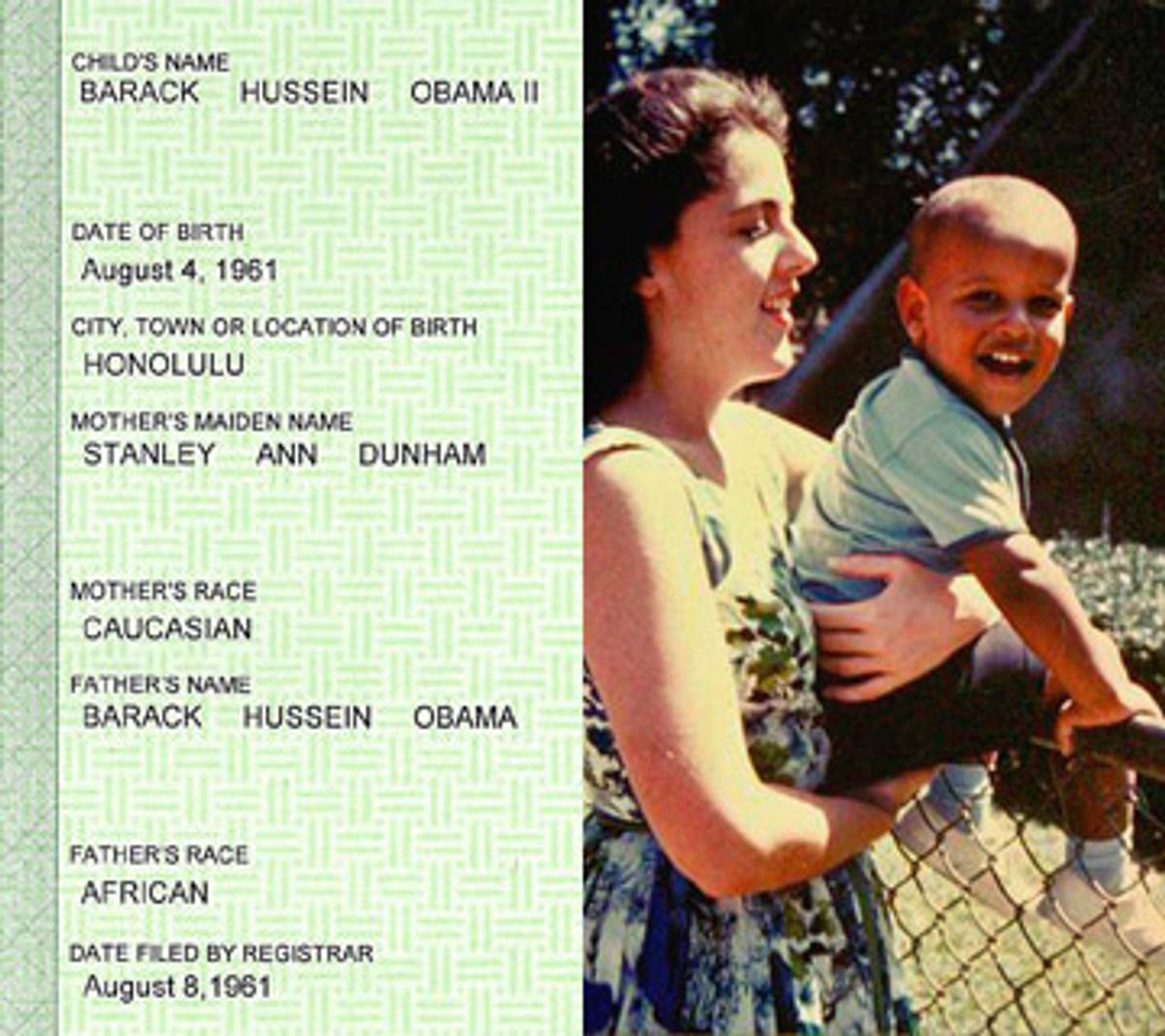 Barack Obama can't be president: He wasn't really born in Hawaii, and the certification of live birth his campaign released is a forgery. He was born in Kenya. Or maybe Indonesia. Or, wait, maybe he was born in Hawaii -- but that doesn't matter, since he was also a British citizen at birth because of his father, and you can't be a "natural-born citizen" in that case. (But then, maybe his "father" wasn't really his father; maybe his real dad was an obscure communist poet. Or Malcolm X.)

You might think these rumors would have died off after Obama produced proof in June that he was, in fact, born in Hawaii to an American citizen, his mother, Ann, or after Hawaii state officials confirmed in October that he was born there. You might think the rumors would have died off after he was elected by a comfortable margin. Instead, they've intensified. There have been paid advertisements in the Chicago Tribune questioning the president-elect's birth certificate and eligibility, and one group is raising money to run a similar ad on television. The right-wing Web site WorldNetDaily has been reporting on the issue almost nonstop. Numerous plaintiffs have filed lawsuits in various states. And Friday, the Supreme Court's nine justices will decide whether they want to hear one of those suits, which also contends that John McCain, born in the former Panama Canal Zone, does not meet the Constitution's requirements to hold the presidency.

The people hoping this is a sign the court will agree with them and stop Obama from becoming president are almost certain to be let down. The fact that the case has gone to conference doesn't mean anything about its merits -- the court will also be deciding whether to take up a number of other cases, and the chances that the suit will actually be heard is exceedingly small. Eugene Volokh, a law professor at UCLA, has calculated that over the past eight years the court has considered in conference 842 cases that sought a stay. Only 60 of them were actually heard. Seven hundred and eighty-two were denied.

But that doesn't matter. The faux controversy isn't going to go away soon. Yes, Obama was born in Hawaii, and yes, he is eligible to be president. But according to several experts in conspiracy theories, and in the psychology of people who believe in conspiracy theories, there's little chance those people who think Obama is barred from the presidency will ever be convinced otherwise. "There's no amount of evidence or data that will change somebody's mind," says Michael Shermer, who is the publisher of Skeptic magazine and a columnist for Scientific American, and who holds an undergraduate and a master's degree in psychology. "The more data you present a person, the more they doubt it ... Once you're committed, especially behaviorally committed or financially committed, the more impossible it becomes to change your mind."

Any inconvenient facts are irrelevant. People who believe in a conspiracy theory "develop a selective perception, their mind refuses to accept contrary evidence," Chip Berlet, a senior analyst with Political Research Associates who studies such theories, says. "As soon as you criticize a conspiracy theory, you become part of the conspiracy."

Evan Harrington, a social psychologist who is an associate professor at the Chicago School of Professional Psychology, agrees. "One of the tendencies of the conspiracy notion, the whole appeal, is that a lot of the information the believer has is secret or special," Harrington says. "The real evidence is out there, [and] you can give them all this evidence, but they'll have convenient ways to discredit [it]."

Whatever can't be ignored can be twisted to fit into the narrative; every new disclosure of something that should, by rights, end the controversy only opens up new questions, identifies new plotters. Perhaps the most common argument of those questioning Obama's eligibility is that he should just release his full, original birth certificate, rather than the shorter certification, which is a copy. His failure to do so only proves there is reason to be suspicious, they say, and if the document was released, the issue would go away. But that's unlikely. It was, after all, the Obama campaign's release of the certification this summer that stoked the fever of conspiracy mongers.

For believers, it works like this: So what if Dr. Chiyome Fukino, the director of Hawaii's Department of Health, released a statement saying she has verified that the state has the original birth certificate on record? So what if she said separately that the certification looks identical to one she was issued for her own Hawaii birth certificate? Why didn't her statement specify Obama's birthplace? So what if a Hawaii Health Department spokeswoman later clarified that Fukino meant that Obama was born in Hawaii? So what if researchers for FactCheck.org actually saw the physical copy of the certification and debunked much of the key "evidence" supposedly proving that the image posted online is a forgery? They're not really independent. They're funded by the Annenberg Public Policy Center, and Obama once (with Bill Ayers, no less) ran an entirely unrelated program that happened to be paid for with money donated by Walter Annenberg. And on and on and on.

If the long-form birth certificate were released, with its unequivocal identification of Hawaii as Obama's place of birth, the cycle would almost certainly continue. Rush Limbaugh already suggested that Obama's trip to Hawaii to see his ailing grandmother, who died not long after, was somehow connected to the controversy. Others, like Michael Savage, followed Limbaugh's lead, saying Obama was going to Hawaii to alter the record.

Not surprisingly, almost all of the people who've been most prominent in pushing this story have a history of conspiracist thought. There's Jerome Corsi, who's best known as the co-author of the book that launched the Swift boat vets; he's a chief proponent of the claim that the government is secretly planning to form a "North American Union" with Canada and Mexico. Philip Berg, who filed the lawsuit that had until now drawn the most public attention, is a 9/11 Truther. Andy Martin, who's credited with starting the myth that Obama is a Muslim and has been intimately involved in the birth certificate mess as well, was denied admission to the Illinois bar because of a psychiatric evaluation that showed he had "moderately severe character defect manifested by well-documented ideation with a paranoid flavor and a grandiose character." He also has a long history of anti-Semitism. Robert Schulz, who's responsible for the ads in the Tribune, is a fairly notorious tax protester. In 2007, a federal judge ordered Schulz to shutter his Web site because he and his organization were, in the words of the Justice Department's Tax Division, using the site to promote "a nationwide tax-fraud scheme."

We could be dealing with the repercussions of the tangled web these people have woven for years after Obama is inaugurated. We already have some hints of what's to come. Gary Kreep, who heads the United States Justice Foundation and is representing Alan Keyes in one of the lawsuits over the president-elect's eligibility, has said his group will file suit to challenge each and every one of Obama's actions as president.

He may well inspire others. There are a surprising number of people out there -- tax protesters, for instance -- who rely on similarly creative legal thinking based on conspiracy theories for their defense. So don't be too surprised if, sometime after Jan. 20, defendants in federal trials suddenly claim they can't be prosecuted. If Obama isn't really president, then laws he signs have no effect, Department of Justice prosecutors have no authority and judges he appoints aren't legally judges. Anyone who tells you otherwise is just part of the conspiracy.