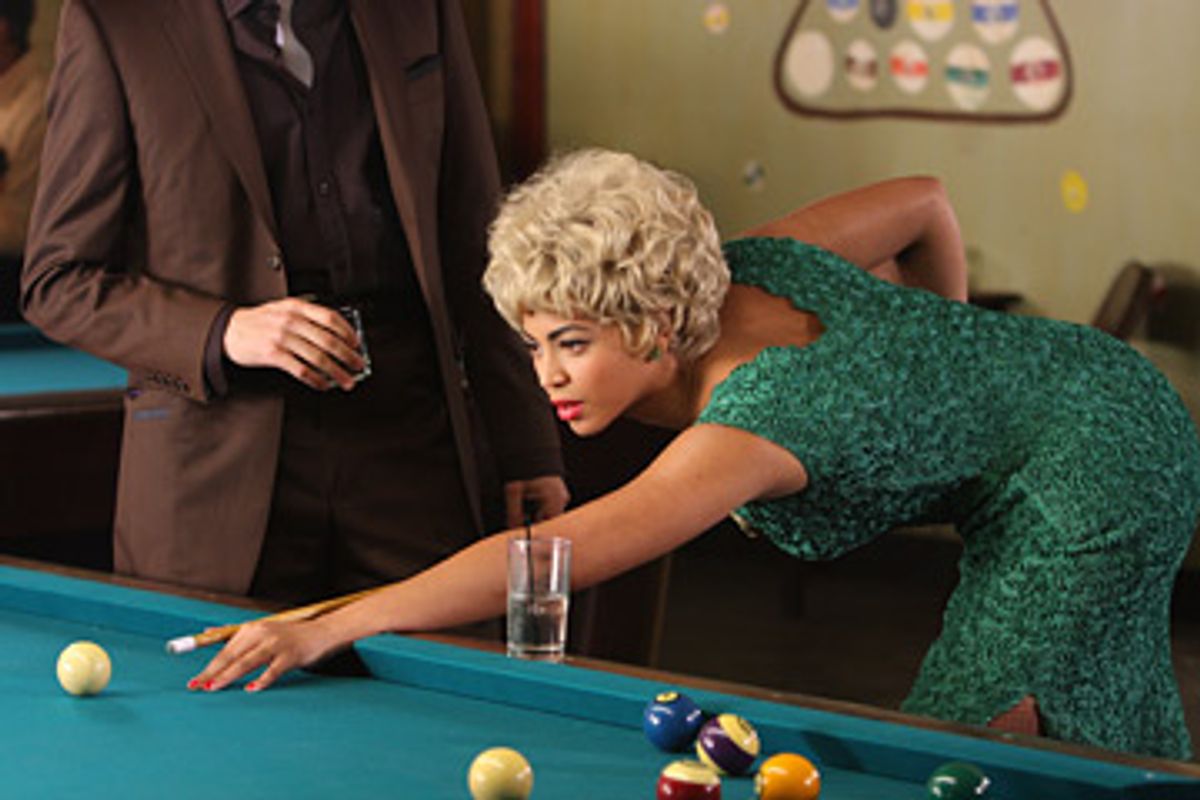 Sometimes the fictions that spring up around pop music are the most direct source of its truth.It's highly unlikely that Robert Johnson made a deal with the devil at the crossroads, but no one cares that the story isn't 100 percent true, or even just 1 percent true. Even though pop music needs its obsessive discographers and fact gatherers -- you've got to have someone around to keep the story straight for future generations -- music finds its true home in our imagination anyway. The tall tales and legends that go along with the artists we love become part of the texture of the music; they're the hiss and pop between the grooves.

That's the spirit in which Darnell Martin's "Cadillac Records," the extremely fictionalized story of the founding and flowering of Chicago's legendary Chess Records, needs to be approached. Chess was founded in 1950 by a Polish immigrant named Leonard Chess, who'd brought his brother, Phil, into the business as well. The Chess brothers sought out and recorded artists who would become some of the greatest names in blues and R&B, among them Muddy Waters, Howlin' Wolf, Chuck Berry and Etta James. Martin, who also wrote the script, takes liberties with the Chess story, most notably dispensing altogether with Phil Chess. But "Cadillac Records" is such an exhilarating, spirited piece of work that its embellishments and omissions cease to matter. Martin, who made her directing debut with the 1994 film "I Like It Like That" and has since worked frequently in television, isn't just telling the story of a record company; she and her actors are outlining the history of a vibe.

Adrien Brody's Leonard Chess is one of the sole white guys in this story, which means he's also the guy holding the purse strings. "Cadillac Records" opens in the 1940s: Leonard Chess is dreaming of opening a club in Chicago, for a black clientele; Muddy Waters (played, superbly, by Jeffrey Wright) is working as a sharecropper and sometime-musician in the Deep South. When musicologist and folk-music historian Alan Lomax shows up to commit Waters' music to record, the singer listens to the shaky, distant-sounding playback as if he were hearing both the history of the past and of an unwritten future at once: "I feel like I'm meeting myself for the first time," he says.

Muddy moves to Chicago and becomes Leonard's first big star. The white guy craftily asks the black guy to sign a contract whose terms are undoubtedly shaky. But he also gives him the keys to a brand-new Cadillac: It's both an act of generosity and an affirmation of ownership -- but these are some pretty nice wheels. Leonard will do the same for the other artists he signs, including the unnervingly sexy Howlin' Wolf (Eamonn Walker), the fragile and explosive blues-harp player and singer Little Walter (Columbus Short) and rock 'n' roll pioneer Chuck Berry (Mos Def). He'll do even more for Etta James (Beyoncé Knowles), the tough-cookie charmer who brings him a succession of hits and nearly destroys herself along the way. In Martin's vision, Leonard Chess is a friend and a daddy figure, a fan and a mid-century incarnation of the white boss man. Brody plays him as a man of shifty charms but also one whose generosity and enthusiasm glimmers through his various faults. This isn't your stock reading of the white businessman who made good money off black performers and never quite paid them their due (a sin that Leonard Chess, like plenty of other white guys in his day, was probably at least somewhat guilty of). But Martin's version of the story is expansive enough to recognize that by bringing black music to previously clueless white people, Leonard Chess played a crucial role in helping it to thrive in the culture.

And if we never would have heard Muddy Waters' "Mannish Boy" or Etta James' "I'd Rather Go Blind" without Leonard Chess, then we have to be grateful to him. "Cadillac Records" operates from that generous view: In the movie's first hour or so, I was frustrated by its structure; it seemed shapeless, meandering. Musicians would walk into and out of the story (and back again) without much explanation. But in the end, I think that free-spirited looseness is one of the picture's great pleasures: Martin is telling a fluid story that may have a somewhat definite beginning but, thankfully, no end.

Martin and her editor, Peter C. Frank, have also taken great care to make sure the music -- performed beautifully by the actors -- is more than just an accessory to the story. Martin doesn't make the mistake of cutting off songs before we're ready to let them go. Instead, she lets the action of the story unfold behind them, a way of recognizing that great music doesn't just appear from nowhere.

She also allows her actors a gracious amount of latitude. There's joy in the way the camera follows them around, capturing Muddy's preening and strutting, or Berry's good-natured approach to calling people out on their bullshit. (Mos Def's Berry laughs with outrage when he alerts Leonard to the fact that the Beach Boys have blatantly ripped off his "Sweet Little 16." The footnote to the story is that he sued their madras shorts off them, and won.) Martin makes sure that every character here emerges as an individual, a task that often flummoxes more experienced filmmakers when they're working with an ensemble. Knowles, in particular, gives one of the finest performances I've seen all year. Her Etta James is manipulative and breakable, unapologetically sexy but also deeply guarded -- embodying the very contradictions that play themselves out in James' music.

What's more, Knowles' ardent, shivery version of "I'd Rather Go Blind" doesn't attempt to top James' original (as if anyone could). Instead, it's a reinterpretation that adds yet another layer -- a stratus made up of myth and all-too-real hardship -- to an already rich and conflicted story. "Cadillac Records" doesn't set the story straight. Instead, it simply gets it right, half-truths, exaggerations and all.