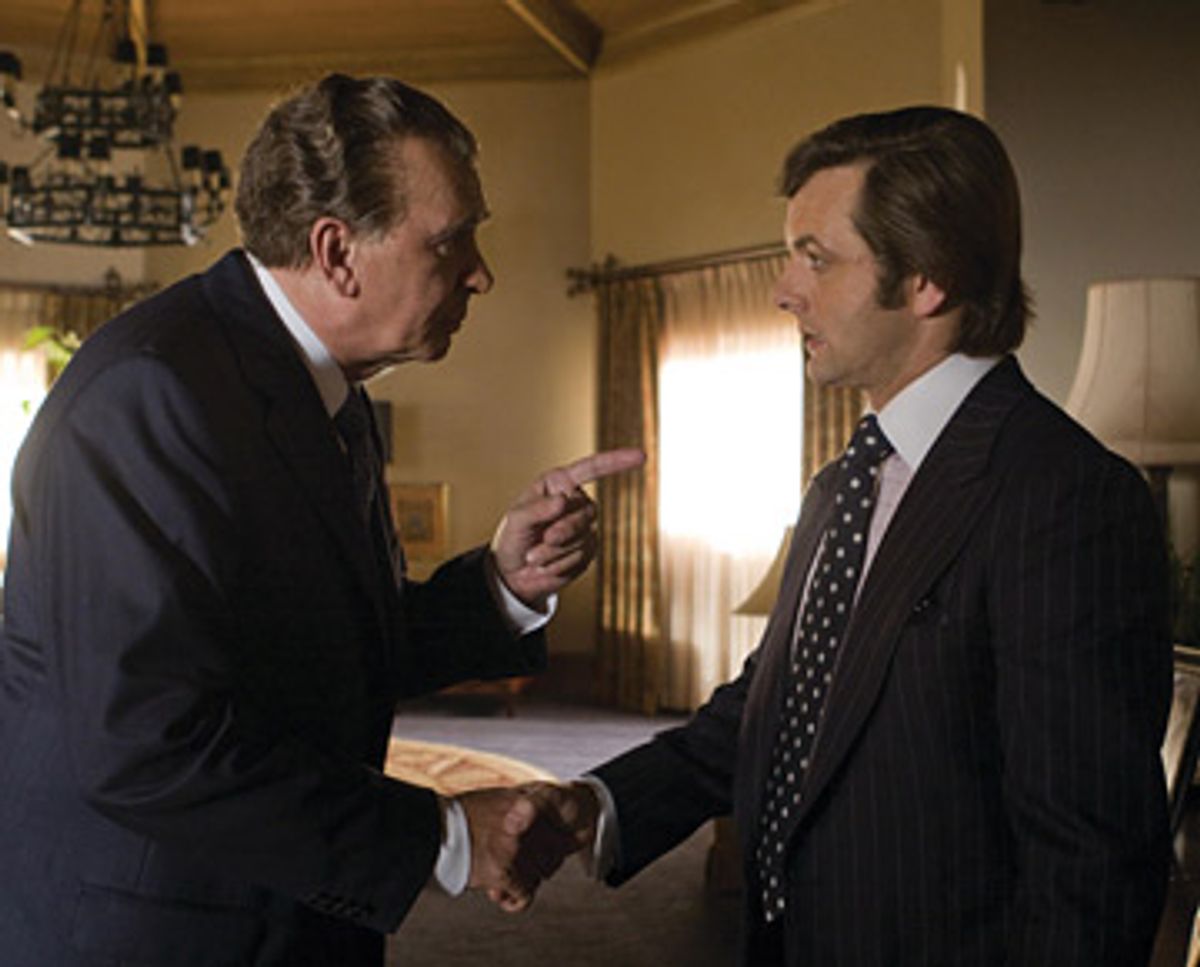 The playwright and screenwriter Peter Morgan is so skillful that he almost -- almost -- makes a convincing case that it's time to humanize Richard Nixon, to recognize him as a flawed, unhappy man who just happened to believe it was his right as president to cheat the American people. But the movie version of Morgan's play, "Frost/Nixon," directed by Ron Howard (and adapted by Morgan himself), dances cautiously up to that line where we might be tempted to think, "Poor guy" -- and then, cannily, refuses to cross it. "Frost/Nixon" -- which stars Michael Sheen and Frank Langella, reprising the roles they played in the stage version -- details the conception, planning and taping of the series of interviews that British talk-show host David Frost conducted with Nixon in the spring of 1977. Before the interviews aired, Frost was (at least in the movie's terms) considered a softball interviewer, a TV personality rather than a journalist, a lightweight who wouldn't ask the tough questions that, say, Mike Wallace might have. At one point Nixon's agent, Swifty Lazar, played by a begoggled Toby Jones, assures his client, "It'll be a big wet kiss," and sure enough, in the early hours of Frost's questioning, the disgraced but undaunted former president responds with answers so ponderous, convoluted and evasive, it seems certain he'll sabotage Frost's enterprise. Flaunting his disdain for the American people, as Nixon had some three years earlier, wasn't enough: Now he was going to bore us to death.

But by the time the Frost-Nixon interviews wound to a close -- in real life, the 29 hours of taped footage were edited and aired over five nights -- Frost, thanks to some wiliness and a little bit of luck, had coaxed his slippery subject into a tacit admission of guilt in the Watergate scandal. And right there, I've gone ahead and given away the ending to "Frost/Nixon" -- but this is a story in which what happens is far less interesting than how it happens. Howard has made a picture for grown-ups, a well-constructed entertainment that neither talks down to its audience nor congratulates it just for showing up. That's particularly refreshing around holiday time, when the studios roll out all their big Oscar-bait pictures, bestowing upon us their most boring, stately and somber works -- anything that spells "quality" with a capital "Q," even if genuine craftsmanship is sorely missing.

Somehow, Howard has pulled off the feat of adapting a play for the big screen without making it seem like a sorry, clumsy creature that's lost its way. There's no question that Morgan and Howard have tweaked some of the facts to give the story more dramatic shape and heft: The movie paints Frost -- who now has a "Sir" before his name and an "OBE" after it, and who hosts a weekly show on Al-Jazeera English -- as more of a washed-up has-been than he really was at the time, and it doesn't mention that he'd already interviewed Nixon in 1968, apparently treating the then-presidential candidate with some pretty soft kid gloves. (After the election, Nixon even brought Frost and his mother to the White House, which suggests that the two had a fairly cordial relationship at one time.)

But the tension Morgan sets up between the two men -- anxiety that also extended to their handlers -- is still wholly believable. According to "Frost/Nixon," the disgraced president hoped to use the interviews as an opportunity to set the record straight and to make some money -- he raked in at least $600,000 for his appearance. And Frost wanted not just to make good television (as well as, obviously, money). He also wanted to lure Nixon into speaking plainly about his transgressions. Frost enlisted two researchers to help him prepare for the interview, seasoned TV-news reporter Bob Zelnick (Oliver Platt) and James Reston Jr. (Sam Rockwell), son of the famed journalist James "Scotty" Reston, who'd already written several damning works about the former president and who wanted nothing more than to trip him up publicly. Kevin Bacon plays Jack Brennan, Nixon's loyal aide, who offers his boss helpful advice and encouragement on a number of topics, including rendering an opinion on whether or not Frost's Italian leather loafers are "effeminate." (The verdict is that they are.)

Howard keeps the filmmaking simple and succinct, with no fancy cutting or obtrusive music (the score is by an uncharacteristically restrained Hans Zimmer). The focus is on the performances: Sheen, who played Tony Blair in Morgan's other story about a leader with a sense of entitlement, "The Queen,"  plays Frost as an ingratiating presence with a brain: He's an obsequious wheeler-dealer, persistently flashing a smile made up of too many teeth. But when he finally catches his adversary off-guard, we get a sense of how sharp those teeth are. The moment is satisfying, and it feels earned.

Langella's Nixon is pleasurable to watch, in a way that makes you want to take a shower immediately afterward. The performance is a marvel of impersonation, and at times it cuts to something deeper than mere character tics and vocal phrasing: In Langella's Nixon we see a roiling brew of suspicion, paranoia and self-loathing that's been fermenting for years, possibly since childhood. We also see a guy who just never had the common touch, who never liked people and who had to learn not to care when people didn't like him. In "Frost/Nixon," he eyes Frost's dishy girlfriend, Caroline Cushing (Rebecca Hall), and asks his interviewer, in a way that shows he has no conception of his own crassness, if he'd done any fornicating the night before -- a line that, like much of the dialogue in "Frost/Nixon," comes straight from real life.

I'm sure there will be lots of talk about how "Frost/Nixon" is relevant today: Lord knows it's become something of a parlor game to compare and contrast George W. with Richard M., to debate who's done more damage to the country, who's more underhanded, more loathsome. It remains to be seen who'll win that contest, but for now, "Frost/Nixon" resurrects a few of the creepy-crawly memories of the 37th president that some of us would rather keep buried. Before Nixon sits down with Frost, he shows his interviewer the handkerchief that he's going to be clutching just out of the camera's range: Occasionally, off-camera, he'll need to dab the sweat off his upper lip; he explains to Frost that he'd been told his profuse sweating lost him the presidency in 1960, and he states this "fact" so baldly that it's clear he's talked himself into believing it -- into believing that just being too sweaty is enough to make the public mistrust and dislike you.

Nixon had plenty of other things working against him -- those darting eyes, those stuttering evasions -- but his faith in that handkerchief is a measure of how much he thought he could get away with. This Nixon believes that as long as he can clutch that hanky, he'll be fine. In the end, "Frost/Nixon" doesn't redeem Nixon or absolve him of his sins, and it doesn't end on a note of triumph, either: It accepts Frost's trumping of Nixon as just a momentary victory. Because no matter what sins Richard M. Nixon admitted to on national television, he never had to mop up his own mess. He left that to us; our disillusionment was his legacy.