The short, disgusting life of the Hummer

As General Motors tells Congress it is weighing the fate of the gas guzzler, Salon compiles a scrapbook. Enjoy these proud moments in Hummer history. 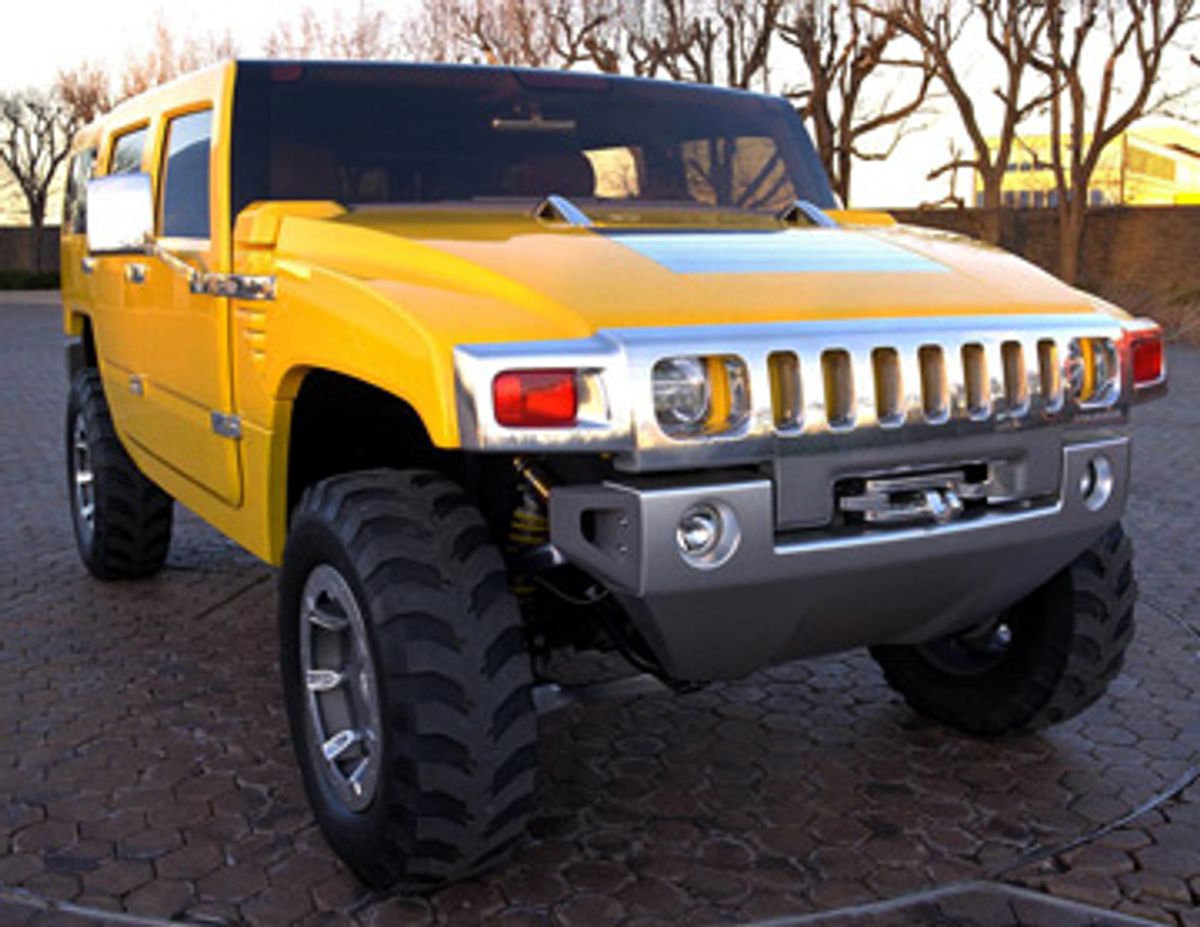 As Detroit once again went begging for billions from Congress on Thursday, executives from the Big Three vowed to wash their hands of gas guzzlers and embrace a future of fuel efficiency. General Motors says it is even placing the future of its Hummer division "under strategic review." For public consumption, that means selling the brand, but observers wonder who would buy it.  If the Hummer meets its maker instead, its last gasp will be a symbol of gargantuan proportions.

Since its debut in the early '90s as the manly man's answer to what to drive when a Dodge Ram pickup is just too damn small, the mighty Hummer has been celebrated and reviled as a metaphor for American bravado -- and wretched American excess. But this hip-hop icon, this military-porn embodiment of America's post-911 belligerence, may now be a victim of the market. Thanks to recent high gas prices, and the stunning collapse of domestic auto sales, Detroit can't give Hummers away. The beast, at least in its North American incarnation, may die not long after the Bush administration, whose shortsighted environmental policies and twisted tax codes helped give it commercial life.

What a shame! Now what are tree huggers going to use as a symbol of Detroit's excess? What are poor Richie Sambora and 50 Cent going to drive? In an affectionate eulogy, Salon presents proud moments in Hummer history.

March 1983: The Hummer is just a metallic gleam in the Pentagon's eye when it awards a $1.3 billion contract to AM General to create a war-worthy successor to the Jeep. In October 1985, a Hummer nation is born with the 9th Infantry Division, based out of Fort Lewis, Wash., the first Army unit to go Hum.

September 1996: Rapper Tupac Shakur, an early adopter of Hummers, dies. His Hummer does not. His song "Don't Sleep," featuring the lyrics "My Hummer roll up / Evacuating strapped soldiers / Inside strategy / Manifestin' military styles," will appear on the posthumous album "Pac's Life" 10 years later. His Hummer H1 has appeared on eBay, for sale, since his death.

December 1999: GM buys the rights to market and distribute the Hummer from AM General.

2002: Beginning in 1996, a series of tax laws combine to create large tax credits for certain Hummer buyers. By 2002, the New York Times reports that, thanks to changes in the tax code during the Bush administration, an eligible buyer can deduct $34,912 of the $48,800 base price of the Hummer.

2002: By now the Hummer rules hip-hop. The video for 50 Cent's "Wanksta" consists of shots of the rapper and his girl driving around in a fleet of Hummers, heaping scorn on smaller vehicles and lesser men. It includes the lyrics "We say you a wanksta / And you need to stop frontin' / Go to the dealership / But you never cop nothin'"

2002: The New York Times reports that GM will require Hummer dealerships to redesign their showrooms to resemble military barracks. The showrooms will have "plenty of brushed steel and exposed bolts inside. A prototype in Milwaukee, Bergstrom Hummer, sports a 35-foot-high 'H' out front."

July 2002: The Hummer H2, a smaller and friendlier Hummer based on the Chevy Tahoe, goes on sale in dealerships. Its base price is $48,800, and it gets 10 to 16 miles per gallon. Even so, the H2 uses more energy in its manufacture and for fuel in its first 24,000 miles on the road than the Toyota Prius does in its entire lifetime.

July 2003: Celebrating H2 hate, the Web site FUH2.com, which stands for "Fuck You and Your H2," launches. The site is devoted to publishing photos of "the official Hummer salute," namely H2 haters giving middle finger to H2s and their drivers. It posts thousands of submissions from Lawrenceville, Ga., to Jackpot, Nev. Flipping the bird didn't go far enough for one Hummer critic, who preferred to dry-hump his disgust in the "I Humped Your Hummer" video.

July 29, 2003: The Sierra Club launches Hummerdinger, a Web site devoted to mocking the Hummer's retrograde technology à la the Onion. One headline reads: "Sounds Like a Hummer! Today's Hottest Stars Sing Praises of 1950's Engine," while the story goes on to quip that Pat Boone and Frankie Avalon have endorsed the vehicle. The site advertises a custom horn that will play "The Ride of the Valkyries" on your Hummer. The not-so-hidden message: fans of the site can send an e-mail message to GM urging the company to improve its fleetwide fuel-economy standards.

Sept. 12, 2003: Responding to the act of Hummer "eco-terrorism" in San Gabriel Valley, the FBI arrests one Josh Connole, a commune-living, solar-panel installing, electric-car driving, Iraq-war-protesting vegan. Suspicious, eh? There's only one problem: Connole didn't do it. Bonus: A member of ELF writes a letter to the Los Angeles Times mocking the FBI for nabbing the wrong environmentalist. The peaceable Connole spends four days behind bars before being released. He later receives a rare "letter of regret" from the FBI admitting the mistake, and $100,000 for his trouble.

2003: Wyclef Jean wins Funkmaster Flex's Celebrity Car show with a Hummer tricked out with its very own aquarium and Spider-Man chopper.

2004: Regis Philbin stars in a commerical for the Hummer H2.

2004: The MTV series "Pimp My Ride" debuts. The show's host, rapper Xzibit, is a proud Hummer owner, availing himself of every opportunity to show off his vehicle on the show.

June 2005: The still-smaller-and-friendlier H3 hits the market. Based on the Chevy Trailblazer, it goes for a base price of $30,000 and gets 20 miles per gallon.

2006: In the movie "Borat," Sasha Baron Cohen's faux naif Kazakh reporter asks an American car dealer what kind of car he can buy that will "attract a woman with shave down below." "Well," answers the dealer, "that would be a Corvette. Or a Hummer."

2007: After years of serving as an unofficial spokesperson for the urban assault vehicle, Arnold Schwarzenegger, now governor of California, decries global warming and converts one of his personal fleet of seven Hummers to run on hydrogen. In a further nod to personal vehicular responsibility, the guv kicks four of his seven Hummers to the curb and claims that he mostly leaves the three others in the garage these days, since he's now chauffeured by the California Highway Patrol.

June 2008: Rick Wagoner, GM's chief executive officer, announces a plan to review the Hummer brand, saying "all options are on the table."

October 28, 2008: Stephen Colbert applauds the "difference makers" of the National Hummer Club, those brave "Hummer conservationists" who won't let their "chariot of freedom" go extinct without a fight. "If we could save the Hummer, we could save America," says one Hummer hero.

December 2008 While pleading with Congress for a bailout, General Motors says it will be "reduc[ing] brands [and] nameplates." It announces it may part with the Hummer line, and with Saab and Saturn. Supposition throughout the media is that "review" of Hummer's status includes the option of simple elimination as well as sale. But take heart, Hummer fans -- sales are still booming in Russia. Perhaps a post-Soviet plutocrat will rescue the brand, and the Hummer will still be available -- as an import.

-- With reporting by Judy Berman, Vincent Rossmeier and Gabriel Winant