While most reality TV starts to repeat itself, CBS's "The Amazing Race" and Bravo's "Top Chef" both age gracefully. 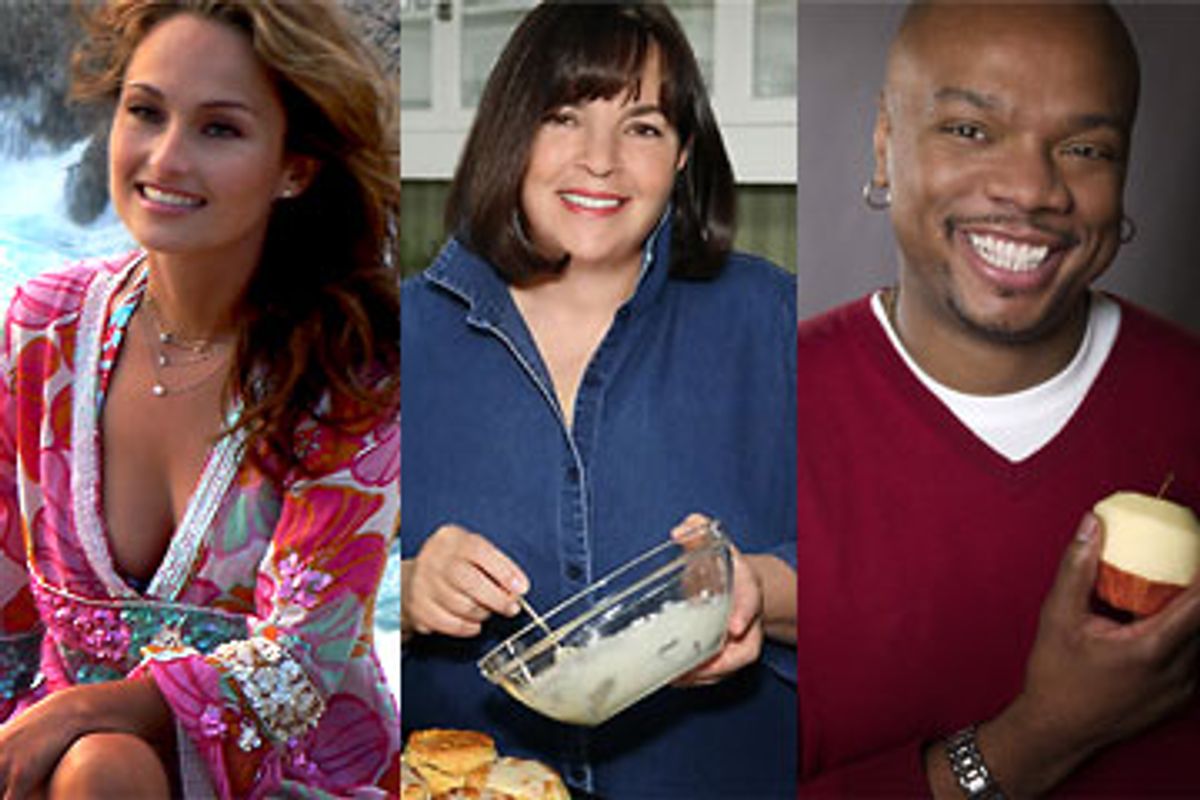 Once, reality TV was a brave new frontier filled with unknown treasures. But now that we've looted every inch of that land, we know every worthless trinket it has to offer: the sassy teenager who doesn't care what people think and bemoans "drama" while stirring it up everywhere she goes. The Botoxed, spandex-clad middle-aged perfectionist with the fake boobs and the spray tan who marries rich, then spends the balance of her days reorganizing her walk-in closets in a Lexapro-addled haze. The beefy himbo with the waxed meat Chiclets whose aggressive remarks hide a deep-seated insecurity about this own intelligence. The frumpy alterna-geek in the nubby coat with the sewing machine in her living room. The snippy pageant queen. The snooty, narcissistic professional gay. The tattooed rocker who does a nice organic mushroom risotto.

We know every one of these reality archetypes all too well by now. Or rather, we know how they talk to a camera about themselves, and how they react to losing the flower-arranging challenge, and what they think about men who refuse to flirt with them or antisocial girls who make the same dress over and over again.

But they used to be so much fun, in the old days! Their lack of self- awareness was a constant source of amusement; their emotional blind spots were endlessly fascinating. "Of course he can't stand her, because she's so frank about her feelings," I'd blurt at my husband, shoving another oatmeal cookie down my gullet. "Obviously he wants the sort of girl who giggles at her feet all the time," he'd add, reaching for the last cookie.

Ah, the glory days! It was so easy to be a know-it-all, to take part in this psychological craft project, wrapping real people up in the packages that producers had pre-selected for us.

But now maybe it's time to go outside and play instead.

Getting wet with the jet set

Nah, outside is boring! I want my TV to keep me entertained. And when I'm feeling really impatient, the same old herd of mystical procedurals and farcical dramedies just won't cut it. I need my reality TV fix, damn it.

Thank the TV gods for the enduring appeal of shows like "The Amazing Race" (8 p.m. Sundays on CBS), which remain entertaining regardless of the personalities involved. Even in the show's 13th season, the producers never limit themselves to the same old types we've seen a hundred thousand times before. In other words, instead of looking for perky sociopaths, they try to find a wide range of people who are tough to shove into any obvious slot, even after several weeks enduring the stress of traveling the world on a limited budget of time and money.

Competitors Dan and Andrew, for example, are whiny, witty, obnoxious, easily discouraged Jewish frat boys with soft bodies and fluffy hair. I can't remember seeing this particular type anywhere else on TV (although one of them did live in my house for about two years, roughly the amount of time it took for me to get tired of doing bong hits and watching the Australian Open for five hours a day). Mercifully, we don't have to sit through a lot of footage of Dan and Andrew talking about themselves or their attitudes (like I did). Instead, we witness them as they encounter each torturous challenge with an endless torrent of complaints, attacks and second-guessing. It's a front-row seat to the Neurotic Traveler Variety Show, and I think I'd be happy watching it for a full hour every week if I could. Whether it's Andrew trying to iron clothes in India only to see half of them get blown to the ground by a huge gust of wind, or Dan, trying to march with Russian soldiers and looking more like Elaine trying to dance on "Seinfeld," these two struggle valiantly, then disparage each other's efforts, then struggle valiantly once more. They're squishy and sad and small, yes, but they're also sort of lovable, like having a pudgy, semi-pathetic fraidy-cat of a little brother. He's crying now, sure, he'll cheer up if you buy him a Frosty!

Siblings Nick and Starr Spangler (yes, their parents should be prosecuted for that one), on the other hand, are cheerful, can-do cheerleader types who keep winning, winning, winning! But you don't understand, they love each other, like, sooo much. God, it's crazy how close they feel, after working as a team on this race! These two were placed on the face of the Earth to make ordinary mortals feel shitty about themselves. It's certainly working on Dan and Andrew.

And then there's Ken and Tina, the couple whose marriage is on the rocks due to Ken's infidelity and Tina's constant nagging. He's a former NFL player, and yes, she's a Botoxed, spandex-clad middle-aged perfectionist with fake boobs who married rich -- but we're not seeing her in her McMansion, chatting with her handbag dog. We're watching her pushing her way through a crazed, celebrating mob in India or chasing live chickens in Kazakhstan. Grating though she may be, she tends to shut up and focus when there's a tough task at hand.

So who's likely to win Sunday night's season finale? Nick and Starr may be the most deserving, but I wouldn't mind seeing floundering frat brothers Dan and Andrew pull off a come-from-behind victory, if only because it'll make them the softest, whiniest, most improbable winners in the history of "The Amazing Race."

While we're lingering in the realm of the soft and whiny, though, let's go ahead and declare this the Worst Season of "Survivor" Ever, in which a handful of sullen, lazy, moping dummies crushed every semi-intelligent, enterprising and resourceful player in their paths.

It all looked so promising, back when they announced that the 17th season of " Survivor " (8 p.m. Thursdays on CBS) would take place not on yet another tropical island, but in Gabon, West Africa, a wild and wooly land chock full of elephants, gorillas, wild boars and weird-looking cats. Sadly, though, there seemed to be a curse on this exotic land: The able-bodied players here were less entertaining than usual (save for the curmudgeonly oddball Randy, who was just voted out) and the weak, negative players were more chumpy and unlikable than ever.

From slouching, snippy GC to dorky, drippy Kenny, the loser tribe seemed doomed to continue losing until they were picked off, one by one. But then the tribes were juggled and changed, and overconfident stud Marcus convinced everyone to throw an immunity idol into the ocean. That move proved to be his and his allies' downfall, and they were unexpectedly ambushed by the surly dummies in their midst.

Everyone likes an underdog, sure, as long as that underdog is remotely likable. But Kenny and chirpy Sugar and clueless, foot-in-mouth sufferer Susie have done little to impress us along the way. They didn't fish in the nearby pond. They didn't look for new sources of food. Instead, they ate their ration of rice far too quickly, then clumsily spilled half of it on the ground. They steadfastly refused to rally, and rarely had anything resembling a conversation with each other. Even former Olympic gold medalist Crystal proved not only to be irritatingly touchy, but also alarmingly bad at athletic challenges. What was her Olympic event, anyway, Frisbee golf?

Going into the final stretch, we can only hope that the relatively bearable and sane California dude Matty or the extremely filthy but resourceful physics teacher Bob can somehow topple the idiot regime once and for all. Bob has managed to avoid elimination for several weeks now by crafting convincing fake immunity idols and using them as leverage -- not a trick that would've worked on your average "Survivor" player, granted, but Bob has wisely concluded that his fellow competitors are about as gullible and easily manipulated as they come. If he can join forces with Matty (who's bound to be alienated from the reigning idiots after last week's votes against him), maybe those two have a shot at outwitting their dim-bulb peers.

But we doubt it. A season this limp and worthless just seems destined for legendary lameness. At least they'll never be forgotten this way, and when "Survivor: Lunatic Fans vs. Least Favorites" airs in a few years, this loathsome crew can trot out their flaccid, grumbling, lazy- loser routine all over again.

At least there's " Top Chef " (10 p.m. Wednesdays on Bravo) to keep us warm through these lonely late autumn nights, when everything else on TV sags and stutters and stumbles on its soiled slip. But is "Top Chef" a truly great show, or are we just hungry? It's so hard to tell sometimes.

Mmm. That sounds dangerous and exciting, doesn't it? It did to Rocco and Padma, who cooed over every eggy wonder while scoffing at that plucky Italian, Fabio, with his brioche with brûlée banana. "He said something before the challenge, that he loved bacon, and I should've listened there," Fabio said, sounding uncharacteristically humble before adding, "Next time, I'm going to do a piece of toast with some bullshit eggs on it, and I'll probably be one of the top three."

I love Fabio. But maybe that's only because my TV set has yet to introduce me to a surly, cheerfully arrogant Italian with a highly developed sense of humor. I have, however, become acquainted with Jamie, the tattooed San Franciscan who doesn't prepare food, she "does" it, as in "I do a nice frisée salad with a duck egg on top" or "I did a play on the BLT slash breakfast sandwich." Like quibbling over whether or not a vinaigrette is an emulsion (culinary wizards inform me that it is, by the way), this kind of pretentious foodie verbiage harshes my "Top Chef" buzz a little. Sure, I'm more than willing to describe food as "bright" or "flat" or to bemoan a lack of acid in the mix, but when talk moves into "doing" food, I get a little uneasy.

That said, Jamie is obviously talented and has earned the right to "do" whatever she wants --  unlike a friend of mine, who orders at restaurants by saying, "I'm going to do the Caprese salad, and then I want to do the salmon, but with the butter sauce on the side." To most waiters, that kind of talk is a one-way ticket to Loogie-ville.

But the way people approach food reflects something essential about their characters, and that's clearly a huge part of "Top Chef's" appeal. Whether Stefan is fussily cutting a neat little circle out of an egg with a special tool he brought with him or Ariane is preparing the same old watermelon and feta concoction we've seen at least 50 times in the past year, they're revealing some crucial slice of their souls, overcooked, underseasoned or otherwise. As a result, when it comes to stubbornly long-running, consistently charming reality competitions, "Top Chef" remains at the top of the heap.

Next week: A pre-holiday grab bag awaits, from "Gossip Girl" to documentaries about Nazi heirs to the best holiday TV specials!