How the president-elect can get the money for the massive public works he proposes -- without raising taxes. 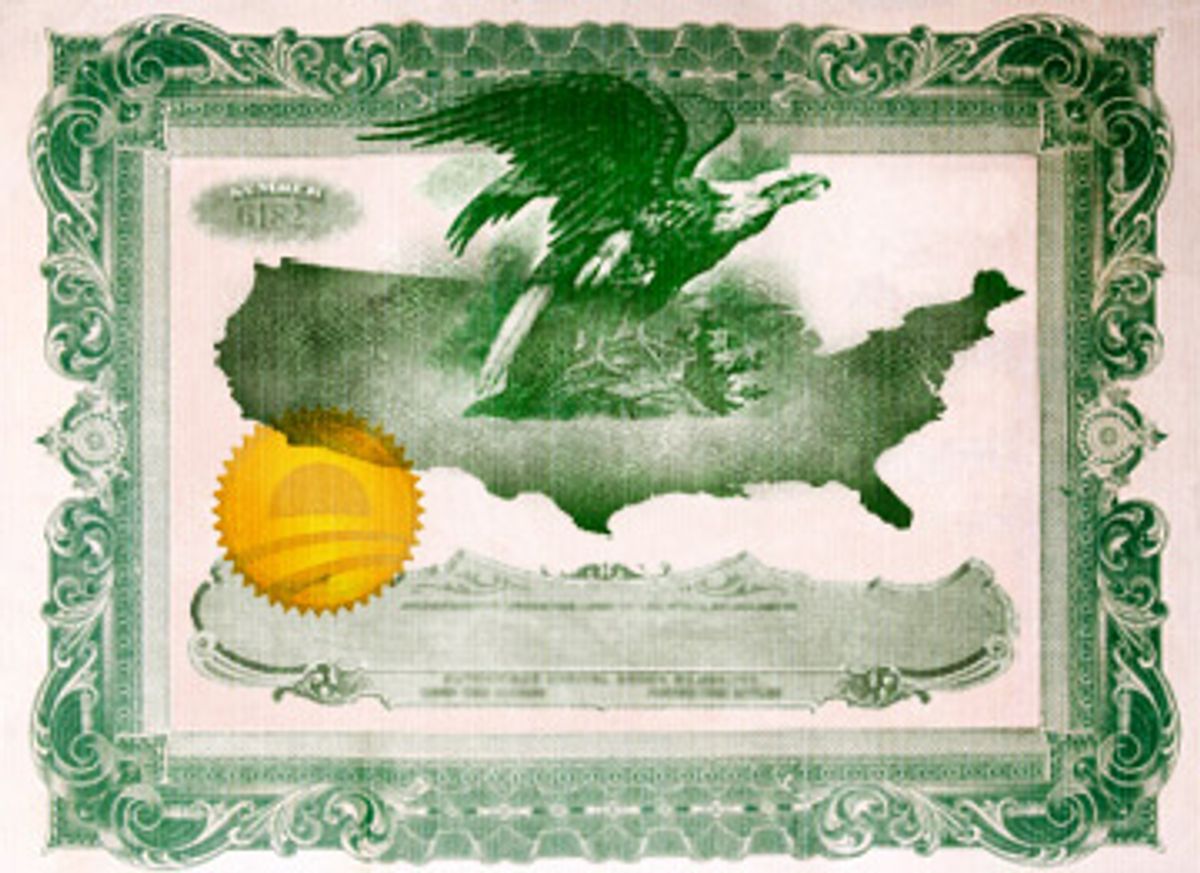 Barack Obama is a man with a plan. On Dec. 6, the president-elect announced major parts of his plan to revitalize the American economy. He listed four priorities: "a massive effort to make public buildings more energy-efficient"; "the single largest new investment in our national infrastructure since the creation of the federal highway system in the 1950s"; "the most sweeping effort to modernize and upgrade school buildings that this country has ever seen"; and a program to "renew our information highway" by increasing broadband adoption, by schools and hospitals in particular.

Obama's priorities make excellent sense. After emergency measures to stabilize the economy, public investment aimed at accelerating U.S. economic growth should be domestic reform priority No. 1. That's because raising the rate of economic growth is the reform that makes all subsequent reforms easier. Accelerating the long-term growth of the productive economy will get us out of the recession faster, refill depleted federal, state and local government funding for public services sooner, and permit larger investments to be made with the same or lower tax rates in areas of needed reform like social insurance, energy and education. And the more rapidly the economy grows, the more quickly the colossal but necessary deficits the U.S. is now running up will melt away.

Note, however, that Obama's stated priorities take the form of long-range public investments. True, the next stimulus package will and should contain massive aid to states and localities to spend on ready-to-go infrastructure projects like roads, mass transit and water systems, in addition to funds for the public services provided by state and local governments whose revenues have collapsed. We have learned our lesson as a nation from the bubble economy of the last generation. Public investment in necessary public goods, not bubble-inducing private consumer spending, should lead the way out of this recession.

Obama, however, is looking beyond a recovery that is still uncomfortably far off to the long-run health of the American economy. Public and private investment in energy efficiency, infrastructure, schools and the information highway are essential for sustainable economic growth and international competitiveness. Since the 1960s, however, these public goods have been underfunded, and absent structural reforms of the way Congress does the nation's business these priorities probably will continue to be underfunded. Devoting short-term stimulus spending to infrastructure and other needs will not address the chronic problem of underfunding.

Here the states can show the federal government the way. Most states, counties and cities, directly or through their agencies, issue municipal bonds to fund long-term, large-scale capital improvement projects like power plants, highways and school buildings. Usually these municipal bonds are tax-free. Most are either "general obligation" bonds, repayable from future general taxation, or "revenue bonds," repayable from a specific stream of income, like highway tolls.

When paying for expensive projects with long-term payoffs, it makes sense for governments, like corporations and nonprofits and ordinary individuals, to borrow the money rather than to pay the entire cost upfront out of current revenues. Raising money by means of tax-exempt bonds that are paid back over years or decades permits a government to spread the costs of roads, schools and energy grids among the beneficiaries over many years, instead of forcing today's taxpayers to pay the entire cost of a project that will mostly benefit future taxpayers.

States, counties and cities have been issuing debt to pay for capital projects for generations. It is time that our antiquated federal government be reformed, to give it the same capability. Doing so need not drive up deficit spending for noncapital projects. Indeed, most states combine bond-based debt financing for capital projects with balanced-budget rules for other spending. If deficit hawks complain, they should be asked whether they paid for their cars and houses upfront in cash.

Today the federal government, unlike state and local governments, lacks the capability to borrow money by issuing bonds for particular capital improvement projects like Obama's priorities of infrastructure, school buildings, broadband and energy-efficient retrofitting. Highway maintenance and construction, for example, is paid for by the gasoline tax. The federal government issues bonds to pay for overall deficit spending, but it does not issue special bonds to pay for particular projects.

One result of the federal government's archaic lack of special-purpose bonding capability has been underinvestment in public goods like infrastructure, which have large upfront costs but which spread their benefits slowly over time. For decades, Congress has sacrificed infrastructure spending to other short-term goals. That is no surprise. State governments would probably underinvest in infrastructure and economic development as well, if they lacked the capability to issue municipal bonds.

Obama knows this. That is why, during the campaign, he called for the creation of a national infrastructure bank: "For our economy, our safety, and our workers, we have to rebuild America. I'm proposing a National Infrastructure Reinvestment Bank that will invest $60 billion over ten years. This investment will multiply into almost half a trillion dollars of additional infrastructure spending and generate nearly two million new jobs -- many of them in the construction industry that's been hard hit by this housing crisis. The repairs will be determined not by politics, but by what will maximize our safety and homeland security; what will keep our environment clean and our economy strong. And we'll fund this bank by ending this war in Iraq. It's time to stop spending billions of dollars a week trying to put Iraq back together and start spending the money on putting America back together instead."

As Obama recognized, a national infrastructure bank would accomplish two goals at once. It would rely on bonds to provide adequate funding for major infrastructure investments without requiring massive initial payments. And an independent, nonpartisan national infrastructure bank, by choosing projects on the basis of merit, could achieve Obama's insistence that decisions should "be determined not by politics, but by what will maximize our safety and homeland security, what will keep our environment clean and our economy strong." The president-elect repeated his determination to remove pork-barrel politics from public investment decisions in an interview on Dec. 7 on NBC's "Meet the Press": "What we need to do is examine: What are the projects where we're going to get the most bang for the buck? How are we going to make sure taxpayers are protected? You know, the days of just pork coming out of Congress as a strategy, those days are over."

In order to achieve the economic goals the president-elect has announced, the new administration and Congress should act rapidly to create a national infrastructure bank. Sens. Dodd and Hagel and Reps. DeLauro and Frank, among others, have introduced bills with that end in mind. Congressional Democrats and thoughtful Republicans quickly should settle on a single national infrastructure bank bill and send it to the new president's desk for his signature. Once it is up and running, the national infrastructure bank can ensure that funding for long-term public investment in transportation, communications and sanitation will not collapse, once the present economic emergency is over. Creating an independent national infrastructure bank with the power to issue the equivalent of municipal bonds is the single most important strategic reform that President Obama and the Democratic Congress can undertake in the first hundred days.