Chaos in the 9/11 courtroom 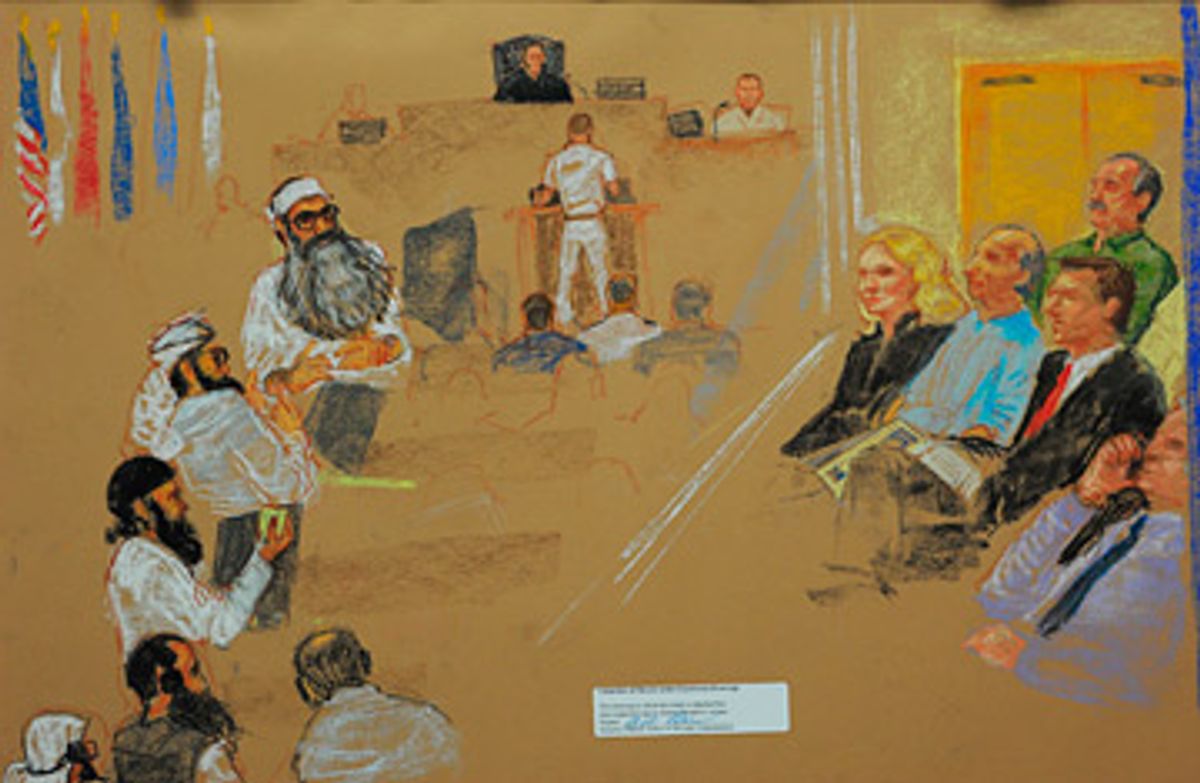 When alleged 9/11 mastermind Khalid Sheikh Mohammed and his four co-defendants entered the Guantánamo Bay courtroom Monday, they came armed with a plan to martyr themselves at the hands of a tainted legal system. By the afternoon, the plan was in disarray.

The five defendants wanted to plead guilty, but only if it brought them their desired outcome. "If we plead guilty, can we still be sentenced to death?" Mohammed asked U.S. Army Col. Stephen Henley, the military commission judge responsible for trying the men.

No one in the courtroom knew the answer, including Col. Henley. In perhaps the most important terrorism trial in American history, the rules of the game are still being made up along the way.

This was the fourth hearing in the military commission case against Mohammed and his four co-defendants -- Ali Abdul-Aziz Ali, Ramzi bin al-Shibh, Mustafa al-Hawsawi, and Walid bin Attash . They are accused of planning and organizing the 9/11 attacks. Forty-nine journalists from 15 countries came to the U.S. Naval base in Guantánamo Bay, Cuba for the show. For the first time in the six-plus-year history of the commissions, the government also brought down a group of five 9/11 family members and their guests.

Khalid Sheikh Mohammed, who is representing himself, immediately attempted to take charge of the proceedings. He interrupted Col. Henley, a replacement for the recently retired Marine Col. Ralph Kohlmann, and chided him for taking so long to read his pleadings. Mohammed complained that he and his four co-defendants had sent the commissions an important message over a month ago and still hadn't received a response.

"Is the military commission using a carrier pigeon?" he asked Col. Henley, in English.

Col. Henley calmly and carefully justified the delay in responding. The filings are all kept in secure facilities, he explained. Although he knew of the filings weeks ago, he did not have access to a secure facility and could not read them until the previous night, he added. The judge then asked the court clerk to distribute to counsel the defendants' filings, now labeled Exhibit 89.

When Exhibit 89 had been distributed, he judge read aloud from it. His words were piped back electronically to courtroom observers like me, who were separated from the judge, the prosecution and the defendants by a glass partition. A 20 to 30 second delay in the electronic transmission allowed enough time for a commissions staffer to hit mute if any of the defendants or their counsels blurted out classified or otherwise sensitive information: "In accordance to what was agreed upon," read Col. Henley, "in the joint meeting for defense strategy, Tuesday, November 4, 2008, the brothers" -- meaning the five 9/11 codefendants -- "agree to the following: (1) to stop filing any motions; and (2) an immediate hearing session to announce our confessions and plea in full."

The cool and calm Col. Henley then turned towards Mohammed and explained that he needed to be sure that he understood the written request he had just read aloud. One by one, he asked three of the defendants -- Mohammed, bin Attash, and Aziz Ali -- a series of questions: "Did you write this? Does it reflect what you want to do? Did you discuss it with your lawyers?"

The judge warned that there were limits to his ability to move things along. Before accepting any plea, he needed to do a thorough factual inquiry to ensure that the defendants were confessing to facts that formed the offenses for which they were being charged, and confessing voluntarily. That inquiry would not happen this week.

Mohammed was not pleased. Neither was bin Attash. "We hope to set a hearing in the near future, as fast as possible," bin Attash urged, in English. Aziz Ali chimed in, also in English: "I wish you to hurry this up."

As for the other two defendants -- bin al Shibh and Hawsawi -- they were out of luck. Their commission-appointed, military defense attorneys had filed motions challenging their mental competency, and the judge said he would not even consider their requests to enter a guilty plea until he had resolved that question.

Neither defendant was dissuaded, and the judge's explanation seemed to irritate both men. "I want to get rid of this woman," said Bin al Shibh, referring to his detailed military counsel Lt. Suzanne Lachelier. The judge explained he had no choice.

Hawsawi raised his hand. "I want to represent myself," he said in Arabic. "Your refusal to allow me to plead guilty and go pro se is refused by me."

But the judge did not appear to care, and returned his attention to the three who were allowed to proceed as desired. "Do you still wish to withdraw all of your motions?" Col. Henley inquired.

The problem is that the rules governing the military commissions and the legislation establishing them conflict. The Department of Defense-created rules say that death is allowed even after a plea of guilty By contrast, the Military Commissions Act -- the legislation authorizing the military commissions -- sets out specific criteria that must be met before a defendant can be sentenced to death. Among the provisions, a military jury must unanimously agree on guilt. If the defendants enter a guilty plea, no jury is convened, and there can be no such unanimous jury finding of guilt.

The judge turned to the government, asking for legal briefing on the issue, and then recessed for lunch (and, for the defendants, prayer.)

When court resumed after recess, the once-certain defendants revealed a plan in disarray.

Mohammed again asked the day's central question. "If I plead guilty, can I still be sentenced to death?" The judge did not know, could not tell him, and advised that he consult with his attorney.

Mohammed asked again. The judge still could not answer.

But Col. Henley said that he was ready to enter their pleas of guilty anyway (a precursor to the formal acceptance of the pleas). Mohammed asked him to wait. With the rush to martyrdom jeopardized, the importance of solidarity was suddenly remembered. He did not want to enter a plea, he said, until the court made a decision about his brothers bin al Shibh and Hawsawi.

Bin al Shibh and Aziz Ali fell in line. "I will not enter a plea today," said bin al Shibh. "We want this to be a joint strategy," explained Aziz Ali.

The judge then ordered the government to provide a full set of legal briefings on the key unresolved questions: Could he, or could he not, accept a guilty plea in a death penalty case? If he accepted the plea, would the sentencing jury still be allowed to impose death?

The briefs are due January 4, leaving the court just enough time to reconvene and take guilty pleas before Barack Obama takes office. If the court accepts the plea, and the plea is deemed valid, then double jeopardy kicks in. At that point, they are protected from being tried twice for the same crime. They have to be tried by this military commission or they cannot be tried by the U.S. government for the specific charges relating to the 9/11 attacks. If the pleas are made and accepted before January 20, President Obama could not simply announce an end to the commissions and transfer these cases to federal court.

Presumably, that's what both the defendants and the Bush administration want -- so long as the death penalty remains an option. Imagine if their wishes come true, and these men are executed after conviction by military commissions that lack credibility around the world. The 9/11 defendants would be perceived by many as martyrs, and the United States would be handing al-Qaida one of its biggest propaganda victories to date.

To some extent, these cases are forever tainted. All five detainees were held for years in CIA custody, where they are known to have been mistreated and tortured, including the acknowledged waterboarding of Khalid Sheikh Mohammed. The years of ill-treatment cannot be undone.

But President elect-Obama has committed to moving these cases to federal court or courts-martial, where the trials will be fair and the verdicts will have much more legitimacy. Most likely, the 9/11 defendants will not have entered valid guilty pleas by January 20, and he will be able to honor this promise. The fact that these men face the death penalty makes it all the more important for him to do so – as soon as he can.