Clint Eastwood keeps it real as a retired Detroit autoworker in this antidote to the season's glossy prestige pictures. 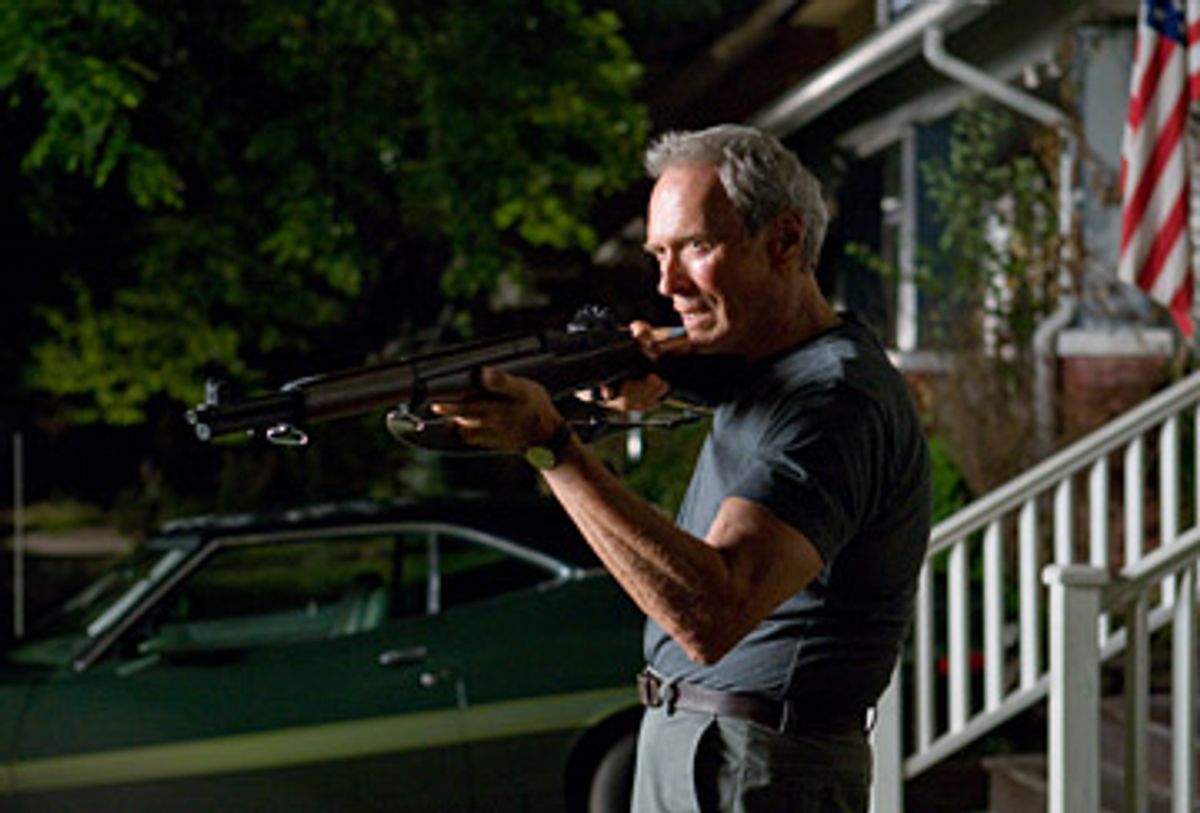 At a time of year when we're surrounded by ambitious, glossy movies based on much-lauded books and lavish tent-pole releases that promise more dazzle than they deliver, it's maybe too easy to be grateful for a movie -- plain-spoken almost to the point of gruffness -- like "Gran Torino." Clint Eastwood is both director and star here, and he succeeds only haltingly in both roles: The picture chugs along, even though its rhythms are often choppy and forced, and Eastwood, great fun to watch when he allows himself to loosen up, falters in the big dramatic moments  -- he just can't resist clamping down hard on the old acting stick.

But until "Gran Torino" starts rumbling headlong toward its tone-deaf, self-serious ending -- the script is by Nick Schenk -- it's often enjoyable, satisfying and funny. Eastwood's character is a retired Detroit autoworker named Walt Kowalski: His last name may or may not be a reference to the Dodge Challenger-driving counterculture hero, played by Barry Newman, of Richard C. Sarafian's cult classic "Vanishing Point," although the two characters have little in common other than, perhaps, their fondness for a nice set of wheels. (More on those later.) Walt is a cranky widower -- as the movie opens, his wife has just died -- who lives in what used to be a nice, respectable white neighborhood. Now Walt, a crusty, bitter Korean War vet, is surrounded by immigrant families, and there's no pussyfooting around in the way he refers to them. The words "chink" and "gook" are genuinely shocking when they first start streaming from his lips, until you realize that, for this guy, they're business as usual.

Walt really doesn't like these people, and when he's forced to deal with them, he shows his contempt by offering little growls and grimacing as if he smelled something bad. When Thao (Bee Vang), the exceedingly well-mannered kid from the Hmong family who live next door, shows up on the day of Walt's wife's funeral to ask if he might have a set of jumper cables, Walt snaps at him: "Have some respect, zipperhead! We're in mourning here."

But Walt eventually befriends Thao, a sweet, diligent kid who's in danger of being sucked into a life of street violence by his gangbanger cousins. He becomes especially close with Thao's sister, Sue (Ahney Her, in a nicely wrought performance that shows some wry comic timing), a hardworking student who doesn't expect the world to hand anything to her -- a marked contrast with Walt's own teenage granddaughter, Ashley (Dreama Walker), a sullen ingrate with multiple piercings who has no use for Walt but who's nevertheless very interested in his car: a 1972 Gran Torino that he helped build himself on the assembly line and that he's cared for lovingly over the years. Now, it's become a vintage status symbol.

Even for a movie set in the Detroit suburbs, "Gran Torino" has too much of a drab, listless look. (It was shot by frequent Eastwood collaborator Tom Stern.) What's more, it sometimes seems unsure of what kind of movie it wants to be, and it's least effective as a potential revenge drama: The ending is a too carefully calculated apologia for "Dirty Harry." It's toward the end that Eastwood's performance falls apart, too. Eastwood is an appealing presence when he's playing a caricature (and Walt Kowalski is nothing but a caricature). He gets into trouble when he tries to mine deeper emotions -- when he reaches for them, they're just not there, and he compensates by doing a lot of the usual squinting and scowling.

But there are some places in "Gran Torino" where Eastwood doesn't make the performance look like work, and those are the moments when he shines. At one point Walt's son and daughter-in-law bring over some alleged gifts, including a handful of glossy brochures for what are essentially nursing homes and a phone with jumbo numbers on each key. His daughter-in-law proffers the latter: "It's a phone," she says helpfully. "I can see that," Walt mutters, and since this is Eastwood we're talking about -- he has veiny, burnished biceps that many 30-year-old guys would envy -- you can see how his character would chafe at being treated like a child.

And while "Gran Torino" explores some predictable notions of racial prejudice, it tiptoes into some more complex territory, too. My jaw dropped when Walt, hanging out with Sue in his backyard, barked, "Get me another beer, dragon lady. This one's empty." But a beat later, I laughed, as was obviously the intent. (Sue has learned to laugh at him, too.) The moment underscores the easy familiarity and understanding that can spring up between people even when their entrenched vocabulary of racial epithets, and the stereotypes that go with them, haven't been fully banished. In another scene, one of the movie's best moments, Walt sits at the kitchen table in Sue and Thao's house as the older women of the family flutter and coo around him, piling his plate high with food: He's the appreciative audience they long for, and he delights in the attention.

Schenk's story may be heavy-handed in places, but it's not easily dismissible. For one thing, "Gran Torino" marches up boldly to the idea that as much as urban liberals love to preach the merits of multiculturalism, it's often the people living in the suburbs (plenty of whom aren't liberals, or wouldn't call themselves such) who really end up putting the ideals of multiculturalism into practice. Even where I live, in Brooklyn, N.Y., there are neighborhoods populated by well-meaning white liberals who might be able to go for a whole day without seeing a person of color -- other than their nanny. While conservatives are often the ones who are most wary of immigrant outsiders, the reality, as Walt himself learns, is that the people who emigrate to this country and have to work hard for everything they have are very much in league with cherished "conservative" ideals -- ideals that aren't bad in and of themselves, as long as they're not co-opted by the government to cut social programs or otherwise disenfranchise citizens.

"I have more in common with these gooks than I do with my own family," Walt says in the movie's most telling line, although he doesn't have to spell it out, given that his own kids and grandkids clearly believe that, just because they're white Americans, everything should be handed to them. "Gran Torino," whatever its flaws are, is a movie about what America looks like now, and it posits that the work of living amicably together is sometimes hard but always worth it. Is that a simplistic idea or a thorny, complex one? We can't know until, like Walt, we've figured out a way to make it work.