On Showtime's third season finale of "Dexter," the world's most popular serial killer loses the best man, but keeps the bride. 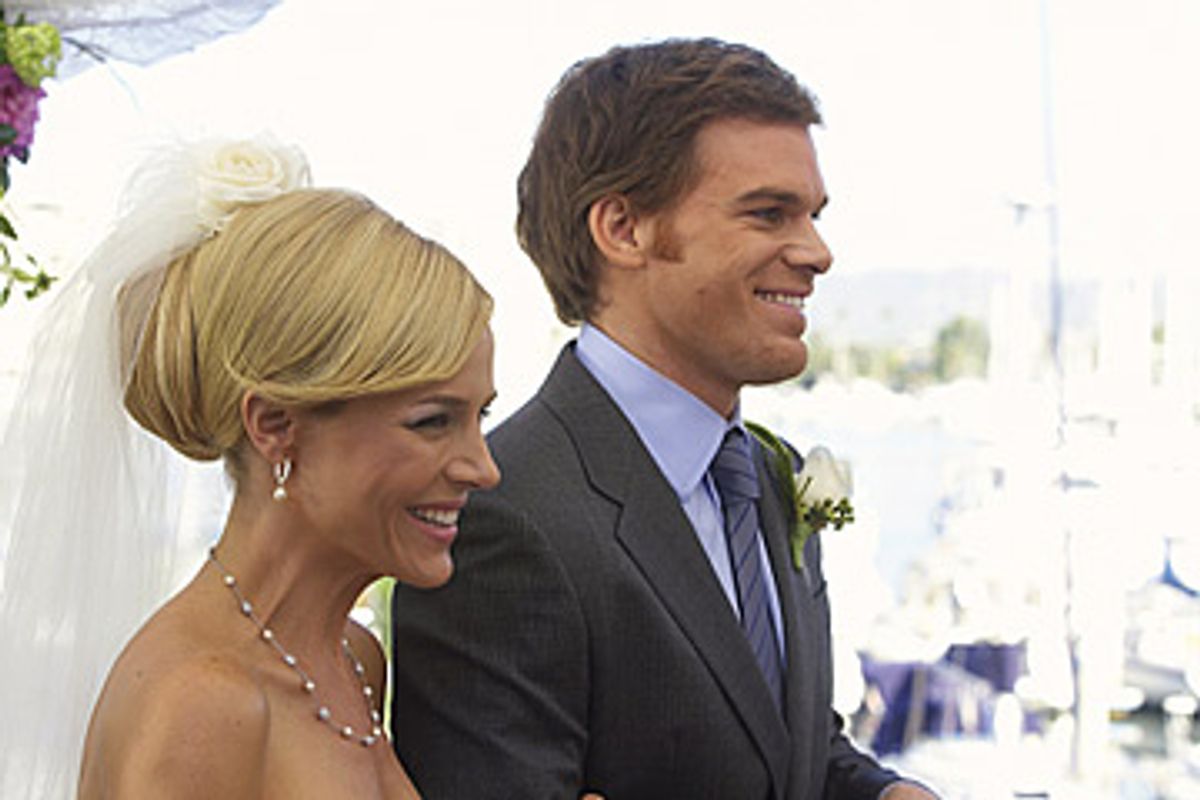 Is Dexter Morgan an ordinary man or a murderous beast? As the third dark but capricious season of "Dexter" came to a close on Sunday night, loyal viewers were forced to ask themselves that question once again, but it was tough not to see Dexter (Michael C. Hall) in an unusually human light. After all, the man has taken small, somewhat reluctant baby steps towards becoming a real human being this season, from marrying his longtime love Rita (Julie Benz) to becoming a father to making his first real friend, assistant defense attorney Miguel Prado (Jimmy Smits).

True, Dexter's new wife hardly knows anything about her husband's rich and disturbing shadow life. But then, the same could probably be said for lots of wives. Yes, Dexter has conflicted feelings about bringing life into the world, as an active purveyor of death. But don't all first-time parents suffer from mixed feelings? And sure, Dexter did end up killing his best friend, Miguel. But what could he do, really? They grew apart.

Or, more specifically, Miguel, Dexter's first and only understudy in the careful art of unprosecutable murder, started to use his new skills for evil, not good. A common snafu, not entirely unseen by Dexter or his nasty-nice dead daddy Harry, who's been appearing to Dexter all season to warn him against bringing Miguel into his confidences. But Dexter couldn't help it; it felt so good to show someone the whole ugly picture, to admit that he's a bloodthirsty monster in ordinary nerd's clothing.

This is the delicious and awful trap of "Dexter," a drama that, even in its third season, still may qualify as the strangest and most unsettling show in the history of television: Even at his darkest hour, even when he's watching events in his life unfold from a great distance, without feeling much of anything, Dexter is undeniably likable. And he only grows more likable each season, despite the bodies piling up around him. Some mix of humility, clarity about his own weaknesses, and alienation from the straight world around him combine to make Dexter easy to embrace. As much as we'd like Dexter to stop killing -- as if it's just an unpleasant bad habit or an inappropriate nervous tic -- most of all we'd like for him not to get caught.

It's true we feel a little bit sorry for Dexter's new wife and for his ball-busting sister Debra (Jennifer Carpenter), both of whom would be destroyed by the slightest knowledge of Dexter's indiscretions. Rita was battling pregnancy hormones and the challenges of her emotionally remote, socially inept fiance all season, while Debra's bad taste in men was on display yet again, as she alternately flirted with her loose cannon of a partner, Quinn, and slept with a confidential informant, Anton. (We were led to suspect that one of the two was secretly nefarious, but Quinn’s past troubles faded into the background while Anton turned out to be a stand-up guy, albeit one with no real career and a daily pot habit.) Even Lt. Maria LaGuerta (Lauren Velez) was thrown back into a traumatic spot after her budding friendship with defense attorney Ellen Wolf (Anne Ramsay) was cut short by Miguel taking his newly acquired skills as a murderer on the road without Dexter's consent.

Still, there was something satisfying about watching Dexter make a friend, even if we knew it could only end in bloodshed. As Miguel, Smits embodied the affable hothead and simmering maniac with such humor and restraint that it was easy to enjoy his place in Dexter's life, even as all signs pointed to the same inevitable, ugly conclusion: He was using Dexter for his expertise and access, just as the serial killer du jour, George "The Skinner" King, used his beef with Freebo as an excuse to torture and kill his steady succession of victims. Sooner or later, Miguel would have to go.

Yes, Dexter's world was filled with murdering monsters once again, a fact that always leaves Dexter looking almost human by comparison. But does Dexter really have anything but ice water flowing through his veins? Is he capable of being a remotely decent husband and father, given his utter lack of feeling for everyone and everything in his life, not to mention his tendency to disappear on nefarious errands with clock-like regularity?

On a show about a serial killer, particularly a show as smart and lively as "Dexter" was this season, the big moral questions may be omnipresent, but they're also determinedly unresolved. Instead of coming to the hard and fast conclusions of, say, "CSI" or "Law & Order," we're meant to linger with Dexter on that uncomfortable ground between self-interest and moral imperative.

Or maybe we were there already. Dexter makes it so hard to tell sometimes.