Christmas shopping during an economic free-fall is making me anxious: Everything is on sale, but at what cost? 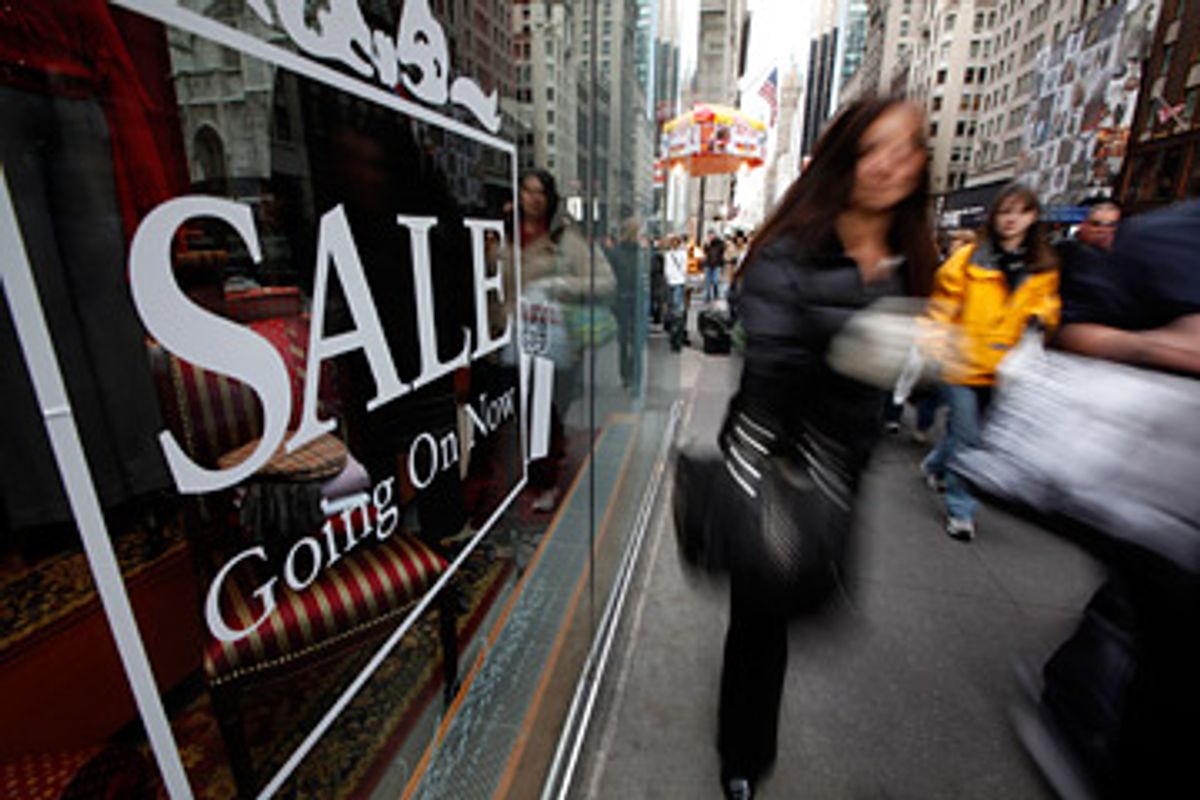 Yesterday I did something that made me feel sickened and confused: I went Christmas shopping.

I've always loved the ritual of holiday browsing, drifting in and out of stores with a vague mission (and an even vaguer list of potential gifts). But in this year of economic apocalypse, shopping has become a minefield -- a financial, political and ethical nightmare. The thrill of insane bargains and the suggestion that we can rescue our economy by spending money is colliding with the nauseating sensation that we should be saving up for a long, dark winter.

As I walked down Manhattan's Fifth Avenue yesterday, I noticed sale signs jostling for space with ornaments in nearly every store window. A line of tourists crowded outside Saks Fifth Avenue to gaze at the elaborate window decorations, but when the doors opened at a few minutes to 10, only a trickle of women actually hustled to get inside. They moved sluggishly through the store, fingering gloves or leather bags and then putting them back down, seemingly unimpressed by the slashed prices. Upstairs on the deserted 8th floor where the expensive shoes live, sale goods (up to 70 percent off) were arrayed on racks that circled the whole department, a mess of less-than-desirable footwear that had obviously been pummeled and picked over for weeks already. I'd been hearing rumors that the hallowed department store might declare bankruptcy in the new year, following in the footsteps of several other chains; standing here, it wasn't hard to imagine.

I slipped across the street to Rockefeller Center, New York's unofficial Christmas headquarters, thanks to the confluence of Radio City Music Hall, a gigantic Christmas tree and a picturesque skating rink. And, of course, lots of stores. None of them seemed wildly busy: In fact, Anthropologie, the Nintendo Store and Sephora all hummed with very light weekday morning traffic. In J.Crew, I spotted the cashmere cardigan that I had been hoping might go on sale; a stack of them in my size sat neatly folded on a table, the price marked down 40 percent. It was still pricey, but the saleswoman circling me pointed to a small sign on the table: an additional 30 percent discount off already marked-down prices.

I convinced myself that this was a good buy, the kind of wardrobe staple that would always be useful. If I ended up on unemployment and had my heat turned off, it would keep me toasty. If -- in the worst case scenario -- the economy were to utterly collapse and dollars became worthless (as happened several years ago in Argentina), I'd have a quality sweater to trade for food in the ensuing barter economy. And if the recession ended tomorrow, I'd have snagged an incomparable bargain.

Standing at the counter (there was no line), I clutched two different colors, unable to decide between them. A salesperson pointed out to me if I bought both sweaters, I'd get an extra 20 percent off the 30 percent cut taken on the previous 40 percent discount! And if I wanted to grab something worth another $10, I'd get another 5 percent off! (I declined, but not before I had scanned the front of the store for small items.)

Although I didn't need two cardigans (or even one, really), I plunked down my credit card and then watched as my cashier and then his manager typed in an endless serious of codes and numbers until finally the magic number pinged: $110 for two sweaters, marked down from the original $336. The cashier looked up at me. "If you want to open a store credit card account today you could -- "

"Get these sweaters for free!" I said.

"Pretty much," he replied, smiling weakly. I almost asked how they could afford to give away so much merchandise, but I didn't really want to hear the answer. At what point do they just bypass their customers and start sending these clothes straight to T.J. Maxx?

It's hard not to feel ambivalent this season about whatever you buy (or don't). The collapsed economy continues to get worse partly, we hear, because consumers are so scared that we aren't spending enough. The antidote to all this? Buy stuff and save the world -- throwing money at a problem being the wonderfully American solution to all ills. Of course, Salon's own Andrew Leonard recently pointed out that it's not necessarily the American people who should be rushing to lay out cash; only massive public spending by the government is likely to turn things around. And even if you do help stores clear out their current inventory at these free-falling prices, they'll be very cautious about restocking in the new year, which won't exactly boost production.

And yet, how can we resist shopping when everything we've ever wanted -- or at least wanted to buy -- is 50 percent off?

"This is a rare opportunity in any consumer's lifetime," retail analyst Marshal Cohen enthused to the New York Times last week, while Barneys creative director Simon Doonan agreed: "It's a smart time to make good investments. You can get clothes you've always wanted but winced at the price. Now you can feel permission to buy."

We have permission to buy!

It's not like I'm a compulsive shopaholic; on the contrary, shopping has always been tinged with caution for me. My first memory of discussing money dates back to the winter I was 4, when my dad told me we wouldn't be getting many presents because money was tight. So tight that my mother, a translator, had taken a second job working evenings and weekends at Lord & Taylor for the holidays. Nowadays, I happily splurge once in a while -- usually at sample sales, where bargains and airless dressing rooms induce a kind of fashion fugue state. But most of the time I carefully consider purchases and hardly ever set foot in Circuit City or Macy's without doing research.

So when the sales frenzy hit just before Thanksgiving, I remained calm. I admit that I put a few big-ticket items in my Amazon cart, toyed with the idea of buying an ultra-cheap new camera and TV and food processor. But then I shut my laptop and hung out with my kids. Midnight came and went, and I hadn't pressed the final checkout button: I hadn't bought anything.

The rabid consumerism of Black Friday -- and especially the fatal stampede that killed a Wal-Mart employee -- soured the mood for a lot of people I know. The bargain mania suddenly felt really delusional and wrong, like gambling in the casino of the Titanic as it sunk. Friends started talking about anti-consumerism activist Reverend Billy and his Buy Nothing Day campaign, which called for Americans to turn their backs on excessive consumption and break free of the corporate stranglehold. Neighbors discussed crafting their own presents or ditching gift giving altogether this year.

Meanwhile, though, the stores were still full of things -- increasingly cheap things. Not just cheap, but eerily cheap. Something's-seriously-messed-up cheap. Colleagues returned from shopping expeditions with shocked looks on their faces: Bloomingdale's had discounted designer boots so severely that a Salon writer could actually consider buying a pair! Macy's was showering New Yorkers with nearly daily coupons offering deep discounts for their "Biggest one day sale ever," and most chain stores had loosened their definition of a "friends and family sale" to include, well, everyone.

I guess it's not so surprising, in this bleak environment, that I spent the 24 hours following my double-sweater purchase filled with confusion and guilt. Should I be propping up local stores to keep people employed -- or knitting sweaters for my loved ones? Are these bargains a good thing or a harbinger of doom? Is there some way that individuals can contribute to rebuilding a more humane, civilized economy?

I'm sure I'll still be thinking about all of this as I walk out into the midtown rain to get some lunch, vowing not to pop my head into Macy's. Although I hear they are having a big friends and family sale -- today only!