An epidemic of kidnapping adds to the downward spiral of violence the president-elect's team will soon confront in Afghanistan. 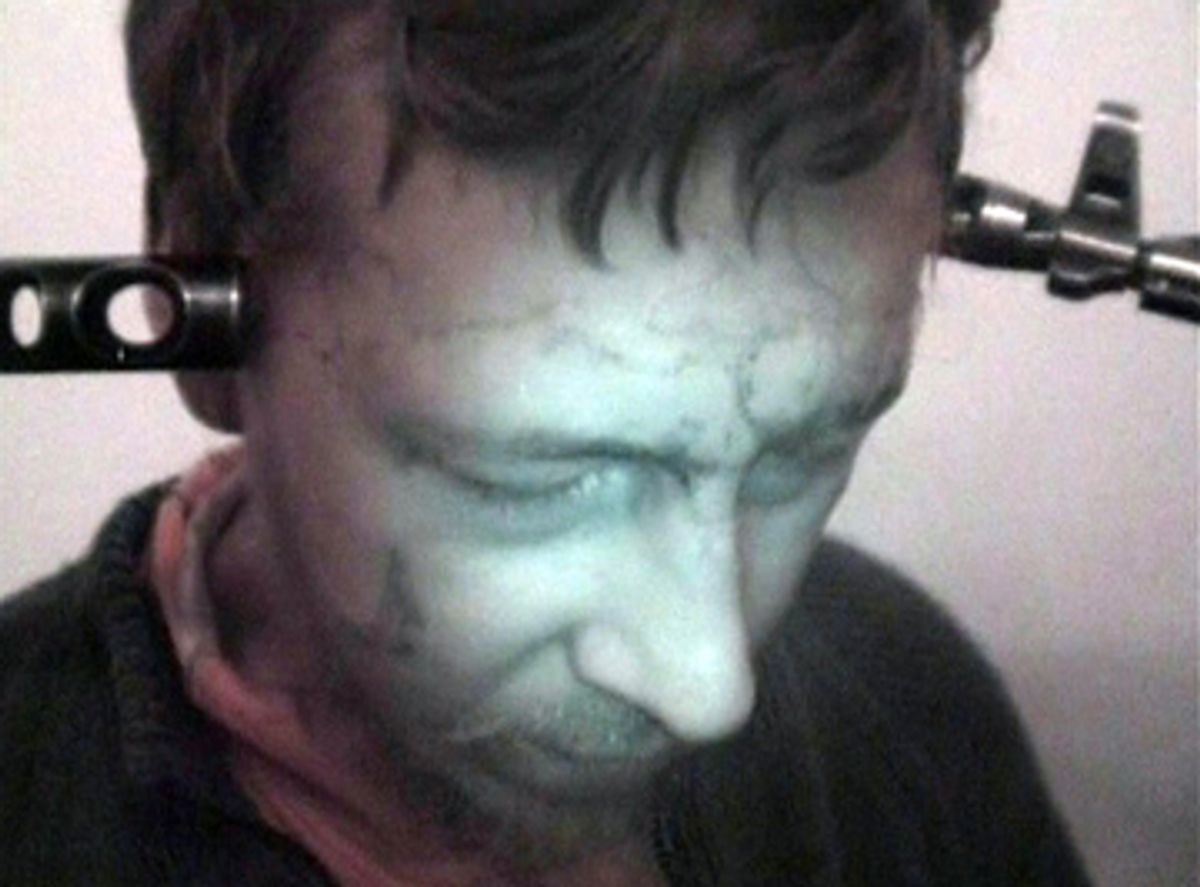 Businessman Farzad Kadri holds his body tight like a wrestler, and his suspicious squint makes him seem older than his 28 years. Ever since his brother was kidnapped, shot in both legs and then released after the family paid a hefty ransom, Kadri is on edge, constantly varying his schedule, curtailing his nightlife. "These days, people are being grabbed left and right in Kabul," he said. "I have to watch out."

Abtullah Danishwar, raised in Los Angeles, returned this summer to the city where he was born 29 years ago. Full of dreams and idealism, he intended to stay a couple of years, find a wife, and help in Kabul's reconstruction efforts. But he's already escaped one kidnapping attempt and is unconvinced his luck will hold. "I'm so scared," he said. "I don't think I can stay."

Welcome to the new Afghanistan. Seven years into the American-led war against the Taliban, security in the country is at an all-time low, with violence and kidnappings by fundamentalist fighters and criminals moving into the streets of the once relatively safe capital city. President Hamid Karzai, who has been called "the Mayor of Kabul," in reference to the ungovernable nature of this sprawling, tribal country, is now hardly even that.

As President-elect Obama prepares to shift more of the U.S. military effort from Iraq to Afghanistan, this increased violence and lawlessness will be a major test for his foreign policy team in a season of unparalleled challenges. Adding to the chaos in the country is growing unrest among a populace enraged by civilian casualties from U.S. and NATO bombings. Kai Eide, the U.N. special envoy to Afghanistan, recently said that poorly executed military operations were threatening stability in the country. The U.S. Army brigade scheduled to arrive in Afghanistan in January, the first phase of an anticipated increase of 20,000 troops, will deploy near Kabul, which military commanders consider to be vulnerable for the first time.

I spent late October and early November in the Afghan capital, where fear of violence from fundamentalists and criminals alike has soared in the last two months, along with accompanying charges of pervasive corruption within the government. Perhaps nothing makes this downward spiral clearer than the recent spate of kidnappings -- a sign of the government's inability to protect its people in the most basic ways.

The nabbing of foreigners is often unpublicized so as not to interfere with rescue efforts; journalists on the ground, for example, knew the day a Canadian journalist was kidnapped in Kabul, but agreed to a news blackout until she was released nearly four weeks later on Nov. 7.

In the case of Afghans, many simply don't trust the underpaid and undertrained police enough to report the crime. All this makes precise figures hard to come by. But privately, officials indicate a recent surge, and in November, the Interior Ministry announced the creation of an anti-kidnapping police unit.

Kidnappers come either from the ranks of the Taliban, who target their ideological enemies, or from criminal gangs looking for victims with deep pockets or, sometimes, children to sell into prostitution or use as labor. The lines blur when criminal gangs sell their hostages to the Taliban, Kabul's police chief said in late November. The Taliban, who are closing in on the capital, already control much of southern Afghanistan, creating a sort of free zone to hold kidnap victims with impunity.

Foreigners, who once felt relatively safe within the borders of this city, are taking sometimes-prohibitive security measures even within Kabul. A French aid worker was kidnapped in central Kabul on Nov. 3 by unidentified kidnappers, and a chilling video released Nov. 26 showed him with a rifle pointed at each temple. "It's a nightmare here, it's really a nightmare," he said, begging for ransom to secure his release. He was freed on Dec. 3.

For Afghans, most of whom lack the funds to hire bodyguards, the situation has become even more dire. Their anxiety is focused on the criminal element. At the home of an Afghan family whose father works at a Western embassy, his sons spoke of their growing fear since a boy from their neighborhood was kidnapped and killed a few weeks earlier. Farid, 16, rarely goes out at night. His 11-year-old brother, Ahmed Sa'id, is too scared to run errands alone at the market for his mother, even before dark. Ahmed Sa'id has begged his father to be more careful on the way to and from work.

Kadri, the businessman, was transformed from an optimist in 2002 into a suspicious cynic today: a man who will not get in a car with anyone he doesn't know well, who won't walk even a block, who virtually never goes to restaurants or parties, who shows up at work at 9 a.m. one day and noon the next in order to vary his schedule.

His approach to life changed after his 23-year-old brother Mustafa was kidnapped one morning as he left his home on foot, headed to Kabul University where he was scheduled to take an exam. Men waiting in a nearby alleyway hit him in the back of his head with the butt of a gun, gagged him, and drove him away. Kadri and his family didn't know anything was wrong until that evening, when Mustafa didn't return home. They tried to call him on his cellphone: no answer. They checked with Mustafa's friends and, coming up empty, began to search local hospitals.

The next day, yet another call Kadri made to Mustafa's cellphone was answered by one of the kidnappers. "Your brother is with us," the male voice confirmed. "We don't need to hurt him; we just want money."

"We don't have money," Kadri answered.

"Then why do you drive around in such a fancy car?" the kidnapper snapped. "Get the money somehow."

The kidnappers asked for $100,000, an enormous sum in this country where the average per capita annual income is under $1,000. Every evening for 28 days, Kadri and his family negotiated with the kidnappers. The call usually came in around 6 p.m. The family kept the discussions private: Like many Kabul residents, they thought informing police would not help, and might hurt, their efforts to secure Mustafa's release. Finally, the captors put Mustafa on the phone directly.

"I'm close to death; I can't take much more of this," he said. "I don't care how much they are asking for, just get them the money."

Kadri declined to say how much the family raised, but it was enough to satisfy the kidnappers, who instructed Kadri's father to set out with the cash and his fully charged cellphone, and they would instruct him where to go. "They were wearing ski masks and carrying guns," Kadri said. "They promised to release my brother four hours later. When they called, they told us where he was, and that they shot him in both legs before they let him go. They told us, 'Go get him quickly before someone else kidnaps him.'"

In the days that followed, Mustafa revealed the conditions under which he'd been held: in a cubed box, about 3.5 feet by 3.5 feet in size. He could neither lie down nor stand. "He pissed and shat and ate in that box," Kadri said, his facing growing hard. "Ate what little he was given -- food and water were very scarce."

American-raised Danishwar found potential kidnappers apparently have even infiltrated Kabul Bank, the largest commercial bank in Afghanistan. When he went there to open an account, they asked him a number of unusual questions: his father's address, place of employment and annual income. "It seemed weird since it was my account, but I stupidly answered all the questions. I didn't want to seem rude," Danishwar said.

A day later, he got a phone call from someone who said he was a Kabul Bank employee, that Danishwar had won a prize and the employee wanted to drop it off at his home. "I said I'll pick it up from the bank branch, but he said, no, it's too large." By now fully suspicious, Danishwar refused to give his address. He remains worried, however, that the kidnappers will track him down somehow. "There must be a policy change," Danishwar said. "Until authorities begin to capture and prosecute kidnappers, this won't stop. It's just too lucrative."

Unlike Kadri and Danishwar, Raisa did report her son's kidnapping to the police, but she felt they didn't take her seriously. In her barren home in an impoverished neighborhood, Raisa's eyes shined with tears as she described her oldest son, 12-year-old Hamid, a sixth-grader who -- like many poor Afghan children -- was his family's main breadwinner until kidnappers seeking child laborers grabbed him a month ago. He called her once on a stolen cellphone, weeping and begging to be rescued. "Either they think he just ran away, or I don't have enough money to get their attention," said Raisa, who, like many impoverished Afghans, goes by one name only. "He's a good boy, respectful, always trying to help his family. Now he needs my help, but if the police won't listen, how can I save him?"

Afghanistan is still home to three competing forms of governing -- tribal law, Islamic law and democratic law. With crime rates high and the government and police viewed as largely ineffectual, many Afghans are unconvinced that democratic law is working; a growing number speak longingly of the relatively crime-free Taliban era. In the southern areas the Taliban do currently control, the government has lacked the strength to push them back, which has also resulted in a loss of confidence in Karzai's leadership.

This is the complex Afghanistan that Obama inherits. From Karzai down, Afghans have urged the president-elect to use additional military force judiciously. Years of poorly targeted bombings continue to inflame the population. According to a recent Human Rights Watch report, 116 Afghan civilians were killed in 13 airstrikes in 2006, 321 were killed in 22 strikes in 2007, and more than 119 were killed by aerial bombing in the first seven months of this year. These numbers are considered conservative, given the difficulty of reaching rural areas to tally casualties.

Western and Afghan officials also say they hope that Obama will not limit his involvement to flexing military muscle, but will exert pressure on Karzai to root out government corruption, crack down on crime and, at the same time, do what he can to accelerate the country's economic redevelopment and give critical support to education -- all of it a tall order.

"It is going to take a creative 'Team Obama' to accomplish what needs to be done here, like the team he's assembled to deal with the U.S. economic crisis," said one Western aid director who has lived in Kabul for the last several years. "It won't be easy. But I think it's our last chance to prevent a full-scale slide into chaos."

Masha Hamilton reported from the Middle East for the Associated Press and from Russia for the Los Angeles Times. She is the author of the novel "Staircase of a Thousand Steps." She now lives in New York.