Why Caroline Kennedy is not Hillary Clinton

And why Hillary Clinton is a lot more like a different Kennedy. 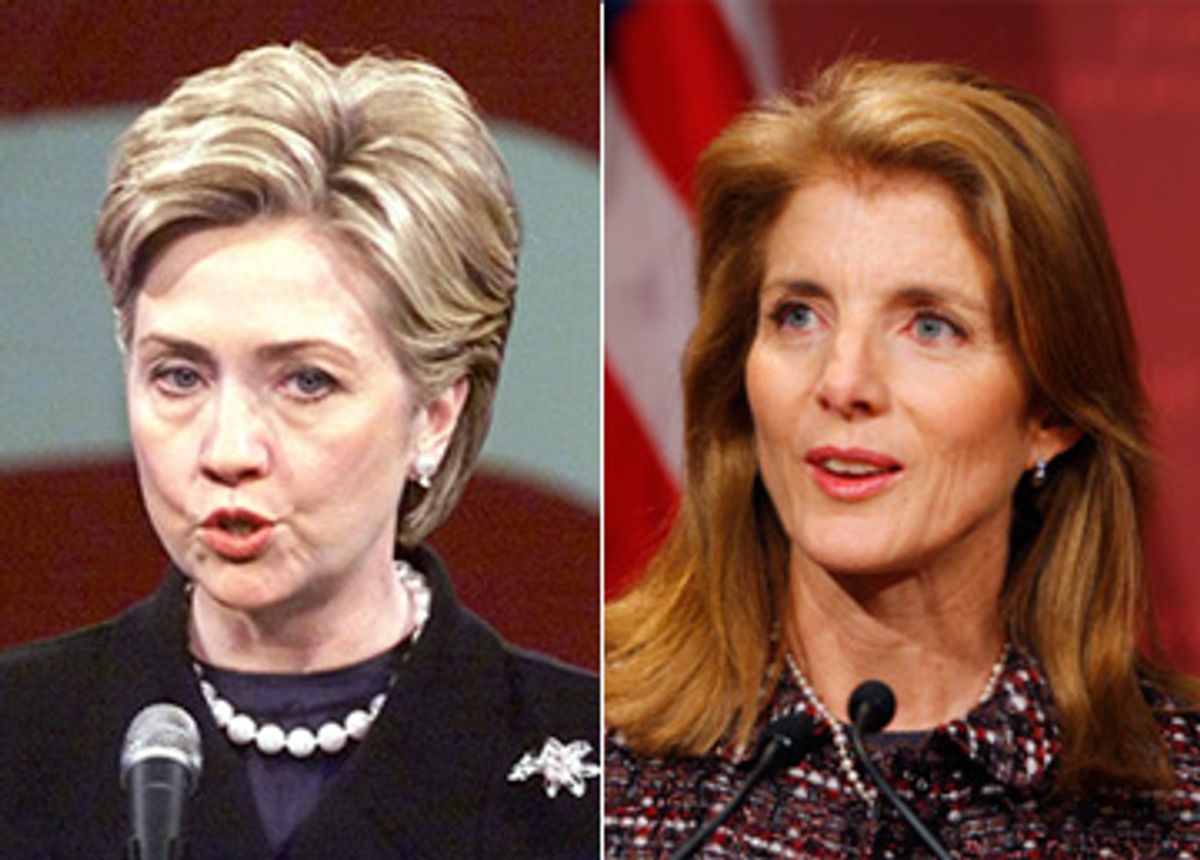 The response to last night's post about Caroline Kennedy, in which I asked (begged?) Gov. David Paterson not to make her New York's next senator, was fascinating and passionate.

Thanks to EmmaFinn in particular for naming yet another upstate New York congresswoman who is worthy of consideration, Louise Slaughter, and for underlining what's truly important. Job No. 1  for any New York senator is helping the half of the state's population that lives beyond the big city and its suburbs. "Here in upstate New York, we're hurting," she wrote. "We're losing jobs and population at an alarming rate. Our infrastructure is crumbling."

But the main topic of discussion seemed to be whether Caroline Kennedy is more or less entitled to the Senate seat than the woman she would replace. "What exactly were Hillary Clinton's qualifications to run for senator of New York?" demanded tmaddin74. "How is Caroline Kennedy's situation any different than that of Hillary Clinton nine years ago?" asked Halifax.

Well, as Christopher1988, no fan of Hillary, noted, "There's one big difference. She was elected by the people."

In 1999 and 2000 Hillary Clinton marched through the snows of upstate New York like Marshal Zhukov, grinding out an electoral victory. She vanquished first Rudy Giuliani and then his replacement, Rick Lazio, in a race the Republicans were originally supposed to win. Caroline Kennedy, who has not, as letter writer zwrite notes, "held a full-time job in years [or] run for even the lowliest office," would be handed the Senate seat by appointment. She would not have to defend it at the ballot box until 2010.

In fact, there's another Kennedy whose New York political career has far more parallels with Hillary Clinton's. Forty-four years ago, Robert F. Kennedy became a New York resident so he could run for the Senate. One of his prime qualifications was having held an unelected position in his brother's administration. There was some grousing about nepotism, and opponent Kenneth Keating called him a carpetbagger, but if New Yorkers had really minded, RFK wouldn't have won the election by 720,000 votes. RFK's son, in fact, compared Hillary Clinton to his father when she first ran for the Senate in 2000. It is RFK's seat that Clinton now holds.

New Yorkers don't mind carpetbaggers. We were all once newcomers to the Goldene Medina. Give us your tired, your hungry, your wealthy, your privileged, your former attorneys general and first ladies. Let them buy houses in Chappaqua and run for the Senate.

But above all, give us someone with pointy elbows. We don't need a neophyte. Letter writer GW says, "Give the kid a shot." How about we don’t? (And Caroline, who is over 50, is only a "kid" in photos of Camelot anyway, which underscores my point about wallowing in nostalgia.)

We need someone who can follow the obnoxious but effective senatorial template that Chuck Schumer lifted from Al D'Amato, or the dogged and relentless model pursued by Hillary Clinton. Battered by recession downstate and decades-long decline upstate, New York absolutely requires an effective advocate in the Senate, and there are many worthy candidates for the job. Again, here's EmmaFinn: "Does Caroline have what it takes to get something done? I honestly don't know. Does she deserve a chance when so much is on the line?"