In this follow-up to "The Pursuit of Happyness," Will Smith gives the greatest gift of all. If only we could send it back. 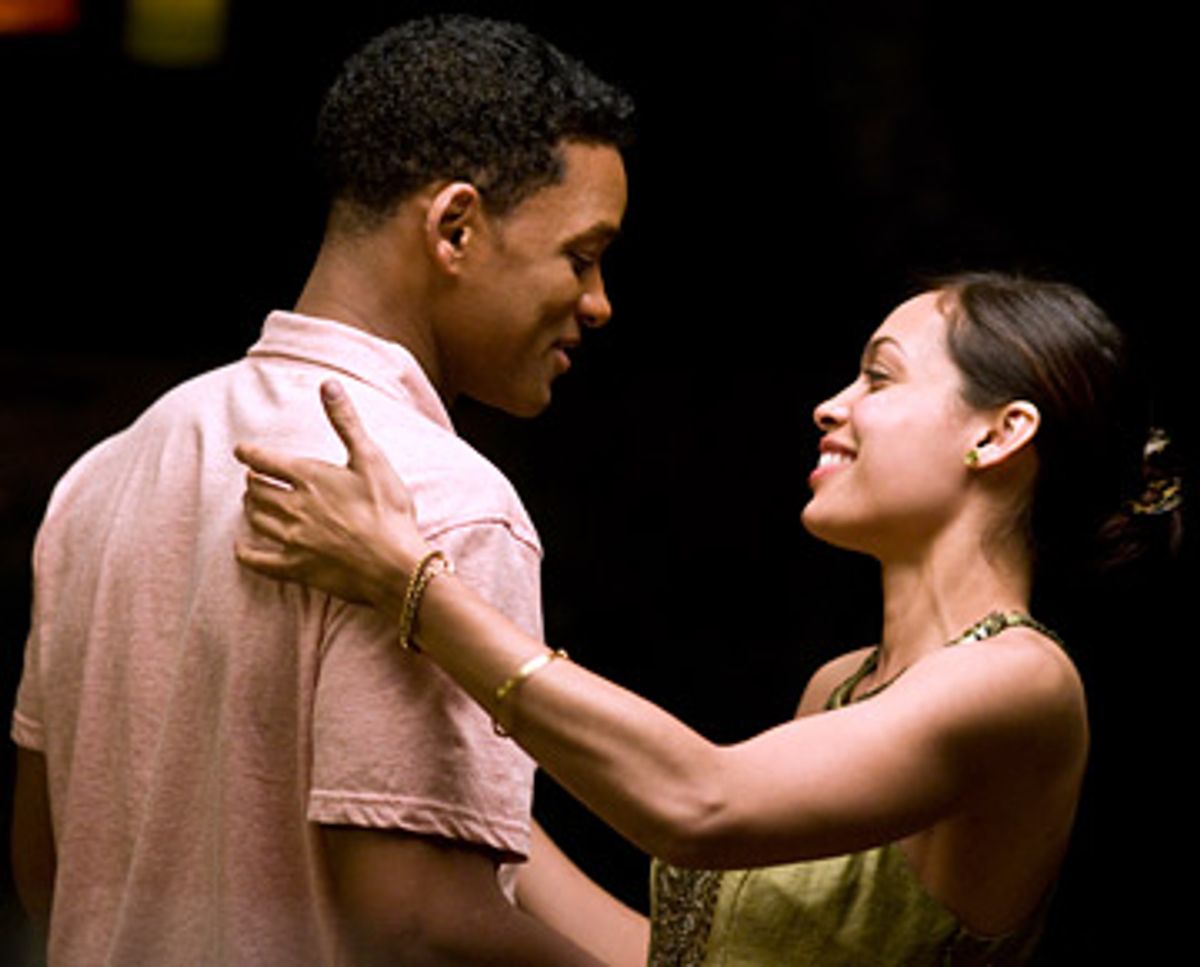 Overflowing with the milk of human kindness this holiday season? Why not give away part of your liver! And who ever said you really needed all of both lungs? After all, we were born with a spare! While you're at it, there's a blind guy in Dubuque named Sidney Schmitz who could really use your eyes. If anybody deserves your discarded eyeballs, it's Sid, a real stand-up guy. And you don't want to give your eyes to a total asshole, do you?

In "Seven Pounds," Will Smith plays a tormented soul named Ben Thomas, and his body is the gift that keeps on giving, even from beyond the grave. As holiday heartwarmers go, "Seven Pounds" is so unintentionally ghoulish, it makes "Black Christmas" look like "It's a Wonderful Life." Ben, who harbors a terrible secret, feels he needs to give something back to mankind -- but we don't initially know that. "Seven Pounds" is structured like a mystery, in which the motives of the hero are murky at first and then emerge with each new plot revelation, a structure that might work if the movie weren't so unsavory and off-putting from the start. In the movie's opening scene, he rings 911 to report a suicide; the operator asks him who the victim is. "C'est moi!" he says, except in English. In the next scene, he makes a harassing phone call to a blind guy, played by Woody Harrelson (who gives a much better performance than his role warrants).

Within the movie's first 20 minutes, it becomes clear that Ben is auditioning candidates -- but for what? It appears he wants to make sure these candidates are really nice people, deserving of whatever largess he has the power to bestow upon them. Perhaps he's running his own version of the Publisher's Clearing House Sweepstakes? But unlike Ed McMahon, he's not going to show up at just anyone's house with that big fat check.

As I think more about the plot, I can barely believe I'm not making it up. In fact, I wish I were making it up. But "Seven Pounds" -- which was written by Grant Nierporte and directed by Gabriele Muccino -- is all too real. Muccino directed Smith in "The Pursuit of Happyness," a deeply affecting picture (based on a true story) about a guy who can't make enough money to keep a roof over his head and that of his child, but who, after just squeaking into a stockbroker-training program, is able to turn his life around. The picture conveyed how easy it is to hit a few bad breaks and suddenly find yourself living close to the edge, even in the so-called land of opportunity. And Smith's performance was piercing partly because he's simply so winning as a performer: If the most likable guy on Earth can nearly slip off the edge of it, then the rest of us had better be wary. (I'm wondering how "The Pursuit of Happyness," made in 2006 and set in the 1980s, would look now, given the terrifying state of our economy, but I'm not sure I can bring myself to watch it.)

Maybe Muccino and Smith thought they could repeat magic with this stinker. And the strange thing is that "Seven Pounds" isn't exactly badly made. Muccino isn't a clumsy filmmaker: He adds graceful touches here and there, like the way he shows Harrelson, a pianist, playing in a cafe one moment and sitting alone, having a cup of coffee, feebly attempting to flirt with a pretty waitress the next. Muccino makes a nice visual contrast between the man's confidence as a performer and the loneliness and uncertainty he feels when he's just being himself.

But overall "Seven Pounds" is too heavy-handed and maudlin to be comprehensible, let alone moving. The real shocker is that not even Smith can rescue it. Smith has been giving consistently appealing, if not outright terrific, performances in movies for years now; even if he seemed a little lost in the strange-but-interesting "Hancock," he somehow kept it from completely wobbling off its axis.

But in "Seven Pounds," many of Smith's choices are incomprehensible: Sometimes Ben squints and stammers for reasons that are unclear. Has he just given up too much of himself? Is his mind failing due to loss of blood? In "Seven Pounds," Smith is more confused than he is charming. He rallies only in his scenes with Rosario Dawson, who's saddled with the most thankless role in the universe: that of "Girl with Heart Condition." This character does have a name (it's Emily), and as Dawson plays her, she's a genuinely believable, low-key presence. In fact, Dawson's performance got me through "Seven Pounds." Possibly, there's a grand, nearly operatic, romantic idea buried somewhere in this story. But "Seven Pounds" is too grim and self-serious to make that angle work properly. Dawson is the only miracle worker here; she emerges from this mess untainted by its creepiness, and every moment she's on-screen, she at least gives us something to watch. By the time I got to the end of "Seven Pounds," I felt I owed her my life. Or at least part of my liver.