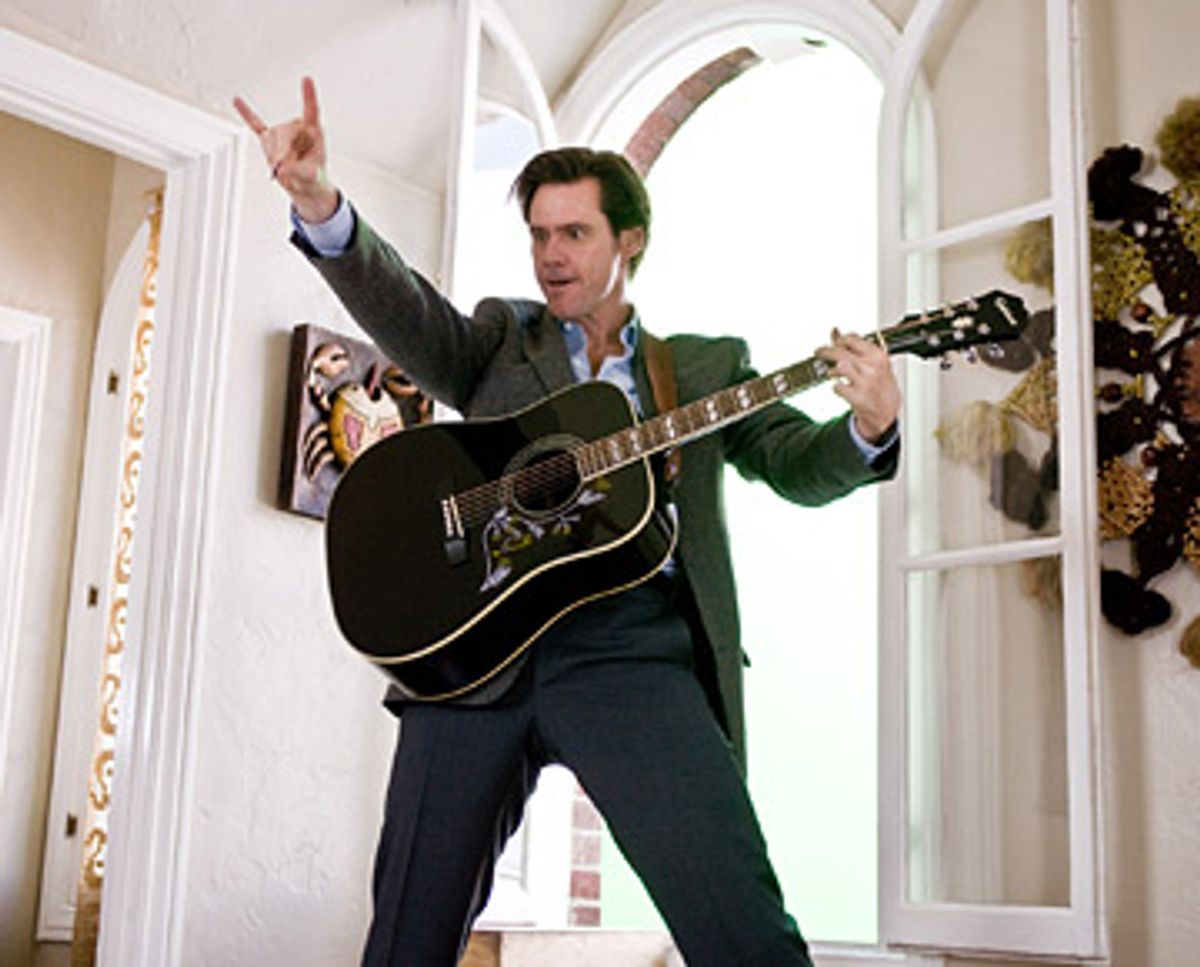 There's no aroma so pungent as the air of desperation that hangs around a fading comic, which is why we should be grateful that Jim Carrey's new comedy, "Yes Man," isn't being presented in Odorama. Gifted comics almost invariably go bad at some point, possibly because great comedy demands a touch of craziness, a willingness to go to extremes. And any extreme, hit over and over again, becomes tiresome. In choosing his roles over the years, Carrey may have had some sense of that himself, and although it's hard to forgive him for subjecting us to the hell that was "The Number 23," in other cases -- most notably, "Eternal Sunshine of the Spotless Mind" -- he's made unpredictable choices that turned out to be good ones.

But "Yes Man" is nothing but a predictable choice for Carrey, a predictably wrong one. Carrey plays Carl, a guy who says no to everything. He's missed so many social events that his friends have almost given up on him. We don't really know why he's uninterested in anything and everything -- the one clue that's dropped heavily is that he hasn't gotten over his failed marriage -- other than that he's just a perpetually negative guy.

One day an old pal (played by John Michael Higgins) drops in from nowhere and invites Carl to a self-help seminar run by a guru who favors flashy brocade shirts (Terence Stamp, who at least lends some solemn elegance to the proceedings). Suddenly, as the result of a "covenant" the guru supposedly hexes him with, Carl begins saying yes to everything. (The premise is more than vaguely reminiscent of Carrey's "Liar Liar.") In fact, Carl can't say no to anything: He finds himself helplessly ordering up Middle Eastern brides, courtesy of PersianWifeFinder.com; he treks out enthusiastically to see questionable performance art; he gives rides to thankless bums who ask to borrow his cellphone and then run down the battery.

But as a result of saying yes with so little restraint, he does meet a cute girl: Allison (the always adorable -- perhaps too adorable -- Zooey Deschanel) is a singer who rides around on a motorbike dressed in a mod-style black patent leather coat. She also teaches a class that combines yoga with photography -- zany! Finally, Carl's life is turning around.

It must also, of course, turn upside down, so we'll have lots of chances to watch Carrey go all crazy and kooky. But "Yes Man" -- directed by Peyton Reed ("Bring It On," "The Break-Up") and written by Nicholas Stoller, Jarrad Paul and Andrew Mogel -- is almost unbearably lifeless, even as it struggles to provide some sort of framework for Carrey's ever-escalating mania. Carrey pulls every old trick out of the bag here: He does a crazy pratfall in a restaurant; he "impresses" his new girlfriend with inappropriate stalker wisecracks; he binds his face with Scotch tape so that his features take on the freakishness of Lon Chaney's Phantom of the Opera. None of it is funny, possibly because every gag that Carrey attempts is set up by an extra beat: I'm not sure if it's Reed's direction or Carrey's timing (it's most likely a combination of both), but anything that might elicit even the tiniest giggle is set off by quotation marks. We're given plenty of time to prepare for our own laughter, the surest way to kill it off.

Watching "Yes Man" was, for me, a completely joyless experience; I just can't take pleasure in seeing Carrey fall, figuratively or literally. His particular brand of mugging and physical shtick drove some people crazy right from the start, but I used to delight in his pinpoint timing, in the effortless ballet of his rubbery limbs. Carrey is astonishing in "Dumb & Dumber," a poo-humor masterstroke. At the time, there was no one like him, and even now, there's still no one like him -- but his distinctiveness no longer matters. With "Yes Man," Carrey has bled the well dry, doing everything he knows how to do, over and over again, just to prove that he still knows how to do it. It's exhilarating to see brilliance in a comic; but by the time you start smelling it, the game is over.