With just four weeks till Obama's inauguration, the Bush administration's military commissions are supposed to be history. So why does the government act like they'll continue past January 20? 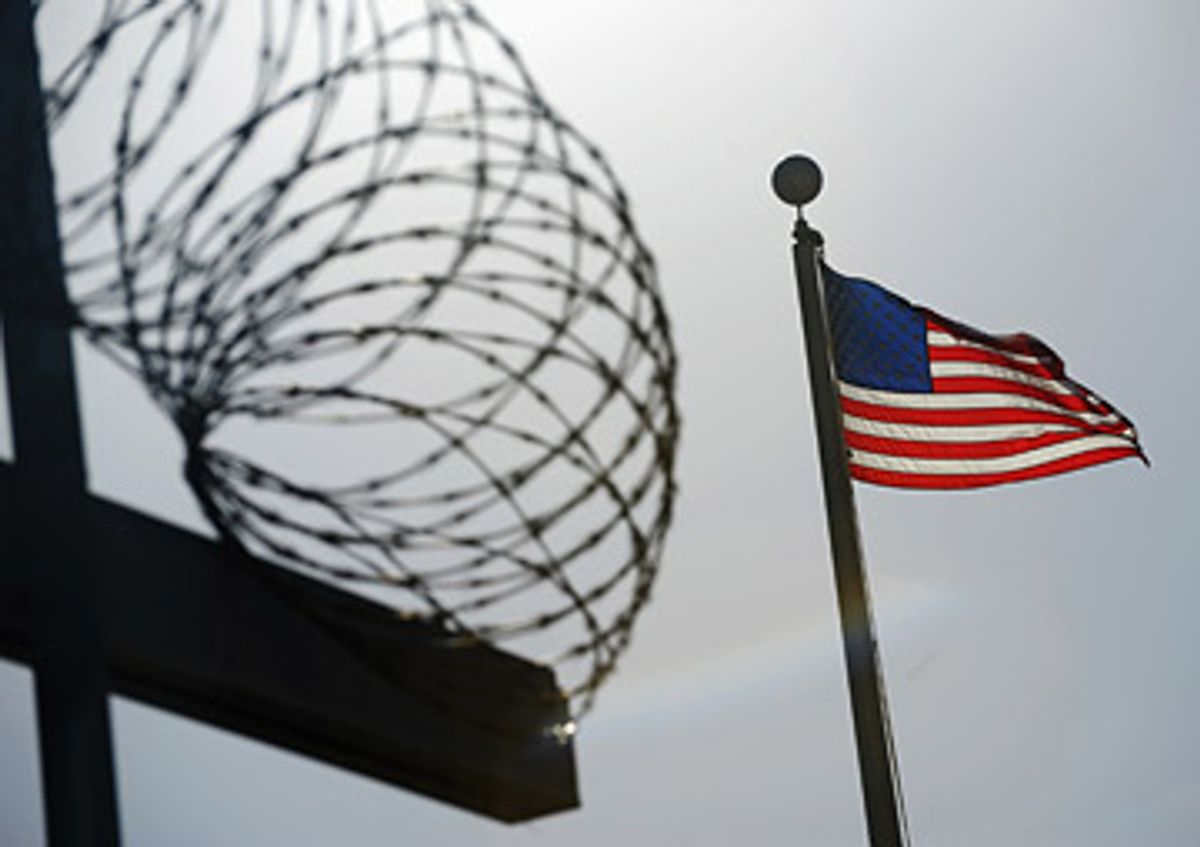 On Dec. 15, during a pretrial hearing for a Guantánamo detainee named Ahmed al-Darbi, the military judge presiding over the hearing acknowledged the elephant in the room.

"The court is aware that on January 20," said Army Col. James Pohl, "a new commander-in-chief will take charge, which may or may not impact on this tribunal."

Although everyone involved in the hearing -- the judge, the defense, the prosecution, the spectators, the witnesses -- knew that the incoming president might make everything they were seeing and doing moot,  nobody had yet said as much aloud. But with the possible irrelevancy of the Bush administration's military commissions now out in the open, the accused rose to address the issue.

Holding up an ad created by the American Civil Liberties Union that ran in the New York Times on Nov. 10 urging Obama to close down Guantánamo, al-Darbi said, "Your Honor, you mention that there will be a new president on January 20 ... Mr. Obama has said he would like to close this location and I wish that this would happen in his presidency."

Col. Pohl ordered that the ad be labeled and entered into the courtroom record as an exhibit. He then adjourned the proceedings and announced that the court would meet again on March 2.

President-elect Barack Obama has long stated that he would shut down the U.S. military detention facilities at Guantánamo Bay Naval Base when he becomes president next month, and most have assumed that meant he would also put an end to the widely discredited military commissions that the Bush administration set up at "Gitmo" and transfer the cases to U.S. federal courts or military courts-martial. With that in mind, Defense Secretary Robert Gates has instructed his staff to have a blueprint for closing the detention center and the military commissions ready by Jan. 20. Human Rights Watch has been observing the military commissions proceedings since they began more than four years ago, and between Dec. 8 and 15, we were on-site for what were probably the last commission hearings for some of the 17 men the Bush administration has charged with terrorism-related crimes.

But the machinery at Guantánamo grinds on, seemingly oblivious to what lies ahead. Prior to the last spate of hearings, which included proceedings for five detainees charged in the 9/11 attacks, improvements were made to the newly constructed $12 million courtroom, built to try the camp's so-called high value detainees. Stadium seating was added to the spectators' gallery. Families of 9/11 victims were flown down to attend the hearings, and a curtain was installed in the tents to shield them from scrutiny. The 100 or so tents erected in Camp Justice, the massive tent city constructed on a former airstrip to house non-governmental organizations, journalists and other visitors to the naval base, were outfitted with telephones (though you could only call from tent to tent, not to the outside world). Someone had bought an iron and a makeup mirror for the women's NGO tent. Most important, the prosecution and the defense and the judges also continued to behave as if the commissions will go on.

On Dec. 12, lawyers for Omar Khadr appeared in a lower-security courtroom, which sits atop a hill with stunning 360-degree views of the Caribbean, to argue that any statements Khadr made to interrogators should be barred from trial on grounds that he was abused and tortured in U.S. custody. Khadr is a Canadian who is charged with killing a U.S. soldier in Afghanistan when he was 15, and his trial is set to begin six days after Obama's inauguration.

The judge, Army Col. Patrick Parrish, heard the arguments and set a date of Jan. 19 for the next pretrial hearing so remaining outstanding issues could be resolved before the Jan. 26 trial date.

Although few believe the incoming Obama administration would begin its presidency by putting a Canadian child soldier on trial before internationally infamous military commissions, no mention was made of Jan. 19 being the day before a new president who is likely to shut down the process takes charge. Nor was there mention of Jan. 19 being Martin Luther King Jr. Day, a national holiday on which U.S. courthouses, federal offices, banks and schools are closed.

When asked at a press conference following the arguments about the conspicuous date for the next hearing, one of the prosecutors, Navy Capt. Keith Petty, replied, "As far as I understand, Martin Luther King stood for peace and justice and justice never takes a vacation."

Al-Darbi, whose Dec. 15 hearing could well turn out to be the last to have taken place at Guantánamo, is a Saudi accused of trying to procure a boat for a terrorist attack in Yemen. Although the government claims that al-Darbi has strong ties to al-Qaida dating back to 1996, and that he is the brother-in-law of one of the 9/11 hijackers, much of its case rests on 119 statements al-Darbi gave to interrogators after his 2001 arrest in Azerbaijan and subsequent imprisonment in Bagram and Guantánamo. His lawyers are arguing that none of his statements should be permitted into evidence because Al-Darbi was abused and tortured in U.S. custody.

At his hearing, the government sought to introduce into evidence a Pentagon-produced video entitled "The al-Qaeda Plan," which it analogized with "The Nazi Plan," a 1945 U.S.-government produced documentary used as evidence in the Nuremberg Trials.

But because "The al-Qaeda Plan" did not contain any footage of the accused, and because it contained footage of the World Trade Center, East African embassy, and USS Cole attacks -- none of which the accused is alleged to have had any involvement in -- the defense argued that the film was irrelevant. It countered by moving to introduce into evidence the Oscar-winning documentary "Taxi to the Darkside," which told the story of an Afghan taxi driver named Diliwar who died after interrogations, beatings and prolonged suspension in the air by his arms at the U.S.-run Bagram prison in Afghanistan. Al-Darbi alleges that he was subjected to the same treatment as Diliwar while detained in Bagram.

"We're not trying to turn the commissions into a film festival," said Air Force Lt. Col. Tom Pyle, one of al-Darbi's defense lawyers, "but if they want to issue theirs, we would like to issue ours."

If the Obama administration shuts down the commissions and transfers the case to a military court-martial or a U.S. federal court, both the prosecution and the defense will have to argue these competing motions all over again. But the judge, Col. Pohl, told both sides they should proceed as if the trial were scheduled to go forward as planned in March.

Before leaving the base on Dec. 17, the other NGO observers and I debated what we should do with the locker of items we had accumulated over the past few months to make our repeated stays at Guantánamo more comfortable -- the coffee maker, hair dryer, towels, the assortment of sunscreen and bug spray, the masks and snorkels. (When commissions weren’t in process, we often spent time at the numerous beaches on the base, swimming or snorkeling).

In the end, we decided to pack it all up and bring it home. The government, however, is still proceeding as if there is no question about the future of the military commissions. On Dec. 19, it announced charges against a new suspect, Abd al Rahim al-Nashiri, a Saudi accused of helping to organize the attack on the USS Cole. It also announced that it was dropping charges against another detainee, Abdul Ghani, an Afghan who was accused of planting land mines and other explosive devices against U.S. and coalition troops. But because the charges were dropped without prejudice, the government maintained that it had the option of charging Ghani before the military commissions "at a later date."