Aniston and Wilson get a rascally dog. But what could have been a pooch of a tear-jerker is actually a moving look at marriage and loss. 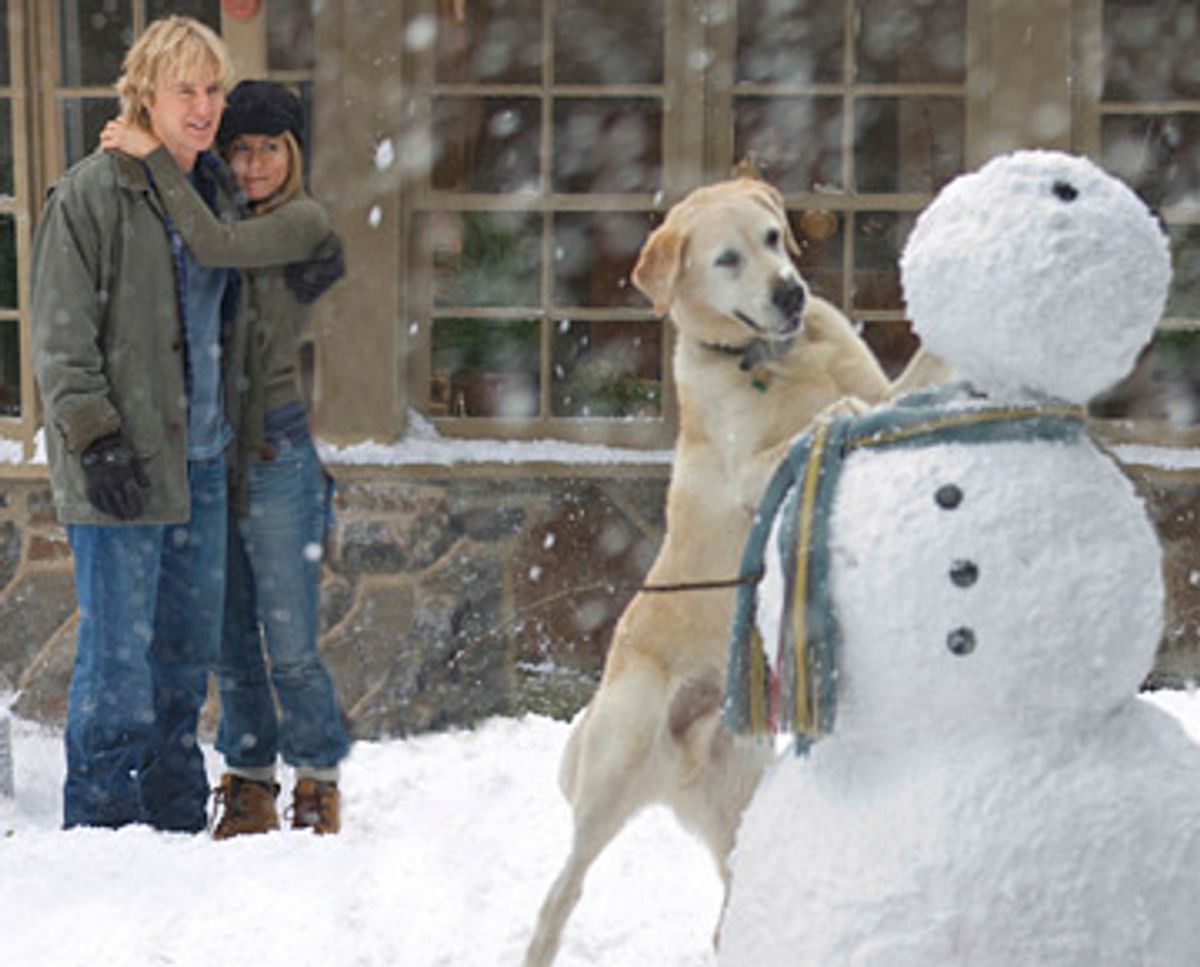 Whenever a movie -- particularly one in which animals are involved -- makes me cry, I knuckle down and ask myself some serious questions, and not just out of professional duty: Were those tears coaxed out via cheap tactics on the part of the filmmaker? Or did he or she earn them the honest way, through artful writing, careful casting, and an understanding of how to work with performers so they hit some emotional truth?

In the case of "Marley & Me," directed by David Frankel ("The Devil Wears Prada," "Miami Rhapsody"), I had to be especially tough. Based on newspaper columnist John Grogan's best-seller, "Marley & Me" is about a Florida couple -- in the movie, they're played by Owen Wilson and Jennifer Aniston -- who adopt what they call "the world's worst dog," a yellow Lab named Marley. Marley chews through drywall and leather bags and is known to steal the occasional barbecued chicken right off the grill. Misbehaving almost constantly, he lives a long and happy life, beloved by his owners as he sees them through all sorts of ups and downs. And then, as every dog must, he dies -- not in any sort of tragic accident, but simply because, for dogs as well as people, old age generally hastens health complications.

I dreaded seeing "Marley & Me." Do I really want to put myself through the paces? I kept asking myself. If you've ever grieved over the loss of a pet, you'll know what I'm talking about. There'd be hell to pay if any filmmaker put me through any cheap-ass emotional meat grinder, especially at Christmas time.

But Frankel and his cast (including the 22 dogs who play Marley, who ages 13 years in the film) are off the hook. I cried at "Marley & Me," but I don't think I was had: The movie is ultimately less about the pain of loss than about the way families often take shape around a pet. Wilson and Aniston play John and Jenny Grogan, who, as the movie opens, are newlywed newspaper reporters who have decided to move from chilly Michigan to sunny West Palm Beach, Florida. They get jobs at competing newspapers: In the mornings, each reads what the other has written for that day's edition. John pretends not to notice that Jenny has gotten better assignments and more space; Jenny might comment that John has added some "nice color" to a piece, even though he's generally stuck covering stories like methane leaks at the local dump.

John is an easygoing guy; Jenny is a woman who has her future meticulously planned out. At the suggestion of his friend and fellow journalist Sebastian (Eric Dane), John decides to get Jenny a puppy, in order to stave off, temporarily, her desire to have a baby. They believe they're delaying starting a family. But Marley -- a dog who's terrified of thunderstorms, and who can't be let off the leash at the dog beach because he'll "spoil it for everybody" with his indiscriminate pooping -- is really the beginning of their family.

Maybe "Marley & Me" -- its screenplay is by Scott Frank and Don Roos -- works so well because the focus isn't purely on Marley: We're not reminded repeatedly how adorable he is, how expressive he is, how naughty he is. Marley just is -- he's allowed to be a dog. He's the recurring punctuation mark in John and Jenny's lives, which is not to say he's unimportant. (Any reader knows how crucial punctuation is.) "Marley & Me" is also a portrait of a marriage, and Wilson and Aniston explore that territory without equivocation. As an actress, Aniston has often struck me as too much of a cuddlebug, the kind of performer who prefers, whenever possible, to be seen as "nice." Here, she's charming and funny much of the time, but in one unnerving scene, she allows herself a degree of bitchiness that surprised me. Her lack of vanity is what makes the performance click.

Not everything in "Marley & Me" works. Some of the ultra-emotional moments leading up to Marley's death could be ratcheted down a few notches. And at one point, a laid-back cocktail-lounge cover of Nirvana's "Lithium" pops up on the soundtrack -- it's by Bruce Lash, and it's a horror.

But "Marley & Me" gets so much surprisingly right. It may be designed to reach a broad audience, but it doesn't pander. A million people can see "Marley & Me" on Christmas Day and feel something. Forget that it doesn't have the prestigious pedigree: It's a more raw and direct movie about the everyday problems of marriage (and of love) than a sterile, allegedly good-for-you picture like "Revolutionary Road" is.

Frankel knows what he's doing here, although he probably also knows what a treasure he's got in Owen Wilson. Wilson is an almost criminally appealing actor, with a fine sense of laid-back timing; he has the power to turn crap pictures like "Drillbit Taylor" into something actually worth watching. And he's extraordinary in "Marley & Me," maybe because he never tries to compete with the dog -- he knows he can't win. Instead, he makes himself Marley's accomplice, his partner in crime. At one point, just as John is turning 40 -- a point at which Marley seems to be the truest friend he's got -- he casually asks the dog, "Have you done everything you ever wanted to do?" He doesn't have to wait for the answer. "Me neither," he says, in his self-deprecating drawl: Wilson has a miraculous way of teasing the finest, truest emotions out of the most mundane moments.

John is with Marley at the end, and Wilson plays the scene with so much delicacy -- and so little sentimentality -- that for days I couldn't shake the memory of it. I cried at the end of "Marley & Me." And though I can't be sure, I don't think I was crying for the dog.