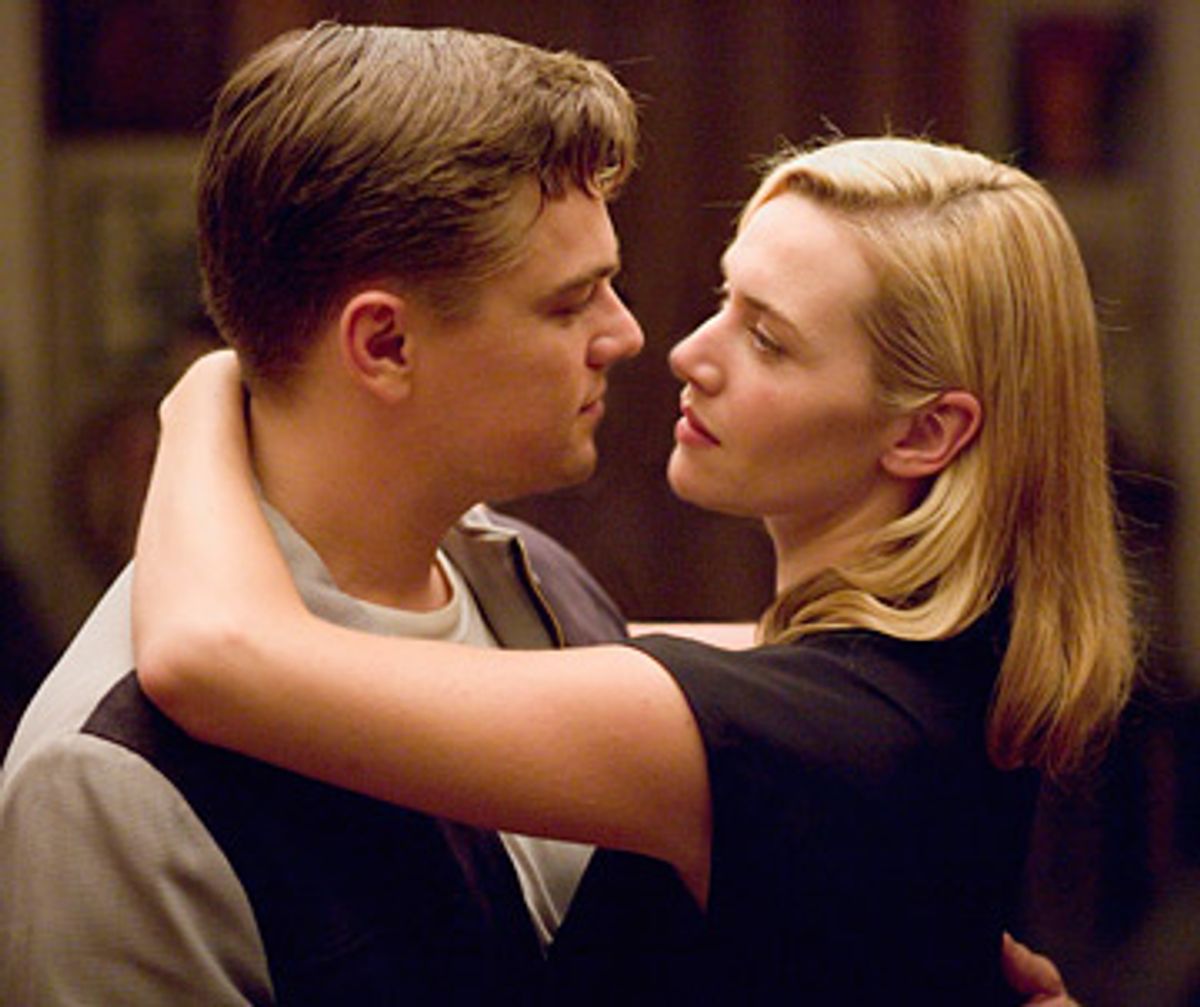 "Revolutionary Road," Richard Yates' 1961 novel about dashed dreams in suburbia, is by no means a pleasant book, and no one who's read it would expect it to make a cheerful movie. The book details the agonies of a young married couple with children, circa the mid-1950s, who suddenly realize that the path they've found themselves on -- defined by the day-to-day grind of making a living, and by the dull, predictable rhythms of life in their cloistered suburban community -- is killing off the intellectual promise they once saw in themselves and in each other. They hatch a plan to cut loose from the drudgery that their friends and neighbors have, seemingly happily, consigned themselves to. They believe their discontent makes them special; they can't see that it only makes them average.

You can understand why that story would be catnip for the English director Sam Mendes, who was lauded as a genius when he poked satirically at the dark underbelly of American suburbia ("American Beauty") but who didn't get nearly as much love when he turned his hand to self-serious adaptations of graphic novels ("Road to Perdition") and heavy-handed readings of contemporary wartime memoirs ("Jarhead"). And so Mendes returns to the subject he seems to have the most contempt for: the American suburbs and the people who live there, either by choice or by circumstance. Plus, he hasn't yet exhausted the visual metaphor of the rose-shaped blood splotch, and "Revolutionary Road" represents an opportunity to put that to use once again -- don't for a minute think he misses it.

Leonardo DiCaprio plays Frank Wheeler, the young husband and father who used to believe he was cut out for some great intellectual pursuit but who now finds himself working for the same business-machine company that employed his father. Kate Winslet is his wife, April, who's in charge of looking after the couple's two children and the family's modest but comfortable Connecticut home. Frank and April have reached their late 20s and know something's wrong with their lives. April makes an attempt to fill that undefined emptiness by getting involved in the local community theater (its first production flops); day after day, Frank goes into the city to work, where he whiles away the hours pushing papers around his desk and babbling into his Dictaphone. He engages in a mild dalliance with a flirty secretary (played by Zoe Kazan), but it doesn't mean anything, and he doesn't want it to. His life with April and the kids means something to him, even in the midst of the amorphous dissatisfaction swirling around him.

Something about the life they're leading -- a life that largely revolves around work and children during the day, and drinking and socializing with their best friends, Shep and Milly Campbell (David Harbour and Kathryn Hahn) at night -- is driving Frank and April apart. She acknowledges it before he does and desperately tries to fix it, only to find that such repair is impossible. She and Frank are stuck in a rut of resentful wheel-spinning, left to despise themselves and each other for everything they can never be.

This is a movie about two people in pain; the last thing they need is for Mendes to turn his cool camera on them. But that's all Mendes knows how to do. He's a clinical director, and whatever feeling he puts into a movie is measured out in careful quarter-teaspoon increments. Some people would call that restraint, but I always get the feeling that Mendes, whose background is in the theater, believes deep in his heart that movies are the lesser art form. Instead of reveling in the glories that are specific to movies -- the ability to reach many people at once, and to foster an intense intimacy by collapsing the distance between performers and the audience -- he always seems disappointed that the movies can't be theater. Mendes' movies always look good, to a degree: He's made it a point to work with the most esteemed cinematographers, including Roger Deakins (the DP on "Revolutionary Road") and the late Conrad Hall. Yet there's something oddly un-cinematic about his pictures: All of Mendes' movies -- including this one, with its thriving manicured lawns and claustrophobically cheery postwar interiors, look beautiful but lifeless. The characters are prisoners of those surroundings, of their meticulousness. They suffer -- oh, how they suffer! -- but they do so eloquently, aided and abetted by the best art direction money can buy.

"Revolutionary Road" is difficult to watch, partly because it's stately and dull and partly because its actors are trying so hard to make the material work, even when their dialogue is either histrionic or just numbingly bland (and in this screenplay, adapted by Justin Haythe, there's almost nothing in between). This is a movie where the quiet, placid surface of suburban life hides many dark corners; the people stuck living these lives tend to either shriek at one another or sit silently, stoned on their own resentment. We've seen this sort of thing in movies and in literature over and over again, done well and done badly. But Mendes presents this simmering, dangerous discontent with a decorousness that gussies up, and softens, its potential rawness; the movie is like an open wound that's lucky enough to have its own stylist.

DiCaprio and Winslet try hard to keep the blood coursing through the picture, and sometimes they get it going pretty effectively: It doesn't hurt that they're simply lovely to look at. These two are complete grown-ups now (as they weren't yet in "Titanic"), and their faces have more to show us. Winslet, in particular, is subtly touching: The almost perpetual anxiety that shadows her character's face is all the more moving because it can't fully obscure her capacity for joy.

DiCaprio is still something of a man-boy, but he uses that quality well here: His Frank is a guy who's just gotten used to the idea of being an adult, only to realize that middle age is creeping up on him. But then there's that dialogue again. At one point, a distraught Frank frets that a doctor "said a lot of things I didn't understand, about capillaries, and . . . Jesus!" He breaks off, as if he were easing his way out of an audition for "Dr. Kildare."

"Revolutionary Road" also gives us Kathy Bates as a prattling, unbearable real-estate broker (she manages to bring a touch of humanity even to this thankless role); and Michael Shannon, desperately overplaying, as her son, John, who's been freshly sprung from a mental institution and who drops in on the Wheelers to play truth-teller, pointing out very loudly just how empty and meaningless their lives are. (Thanks, Bub.)

John is, of course, a character straight out of Yates' book, but his unbearable candor is jacked up even further by Mendes. He can't escape the Mendes touch: A movie's themes, and the most delicate feelings behind them, need to be rendered loud and clear. It's as if Mendes doesn't trust that our hearing, figuratively speaking, is as good as his is.

I concede that "Revolutionary Road" may be the best of Sam Mendes' movies, in that he at least goes through the motions of pretending to care about the characters he puts on-screen. And Yates' novel is hardly a warm one to begin with: At its best, it glimmers with well-observed details and graceful prose. At its worst, it's laced with an unsavory bitterness. Yates always keeps a little distance from his characters, as if he doesn't know how, or doesn't want, to get too close to them.

But I think Yates tries to have compassion for his characters: He blinks hard at them, as if this might help him comprehend their flaws and desires. Does that kind of trying count? I don't know, but I did get more feeling -- or at least a sense that feelings had been struggled with -- from Yates' book than I did from Mendes' movie. To struggle with feelings, you've got to put down your artist's palette now and then. Mendes clutches his with a death grip.