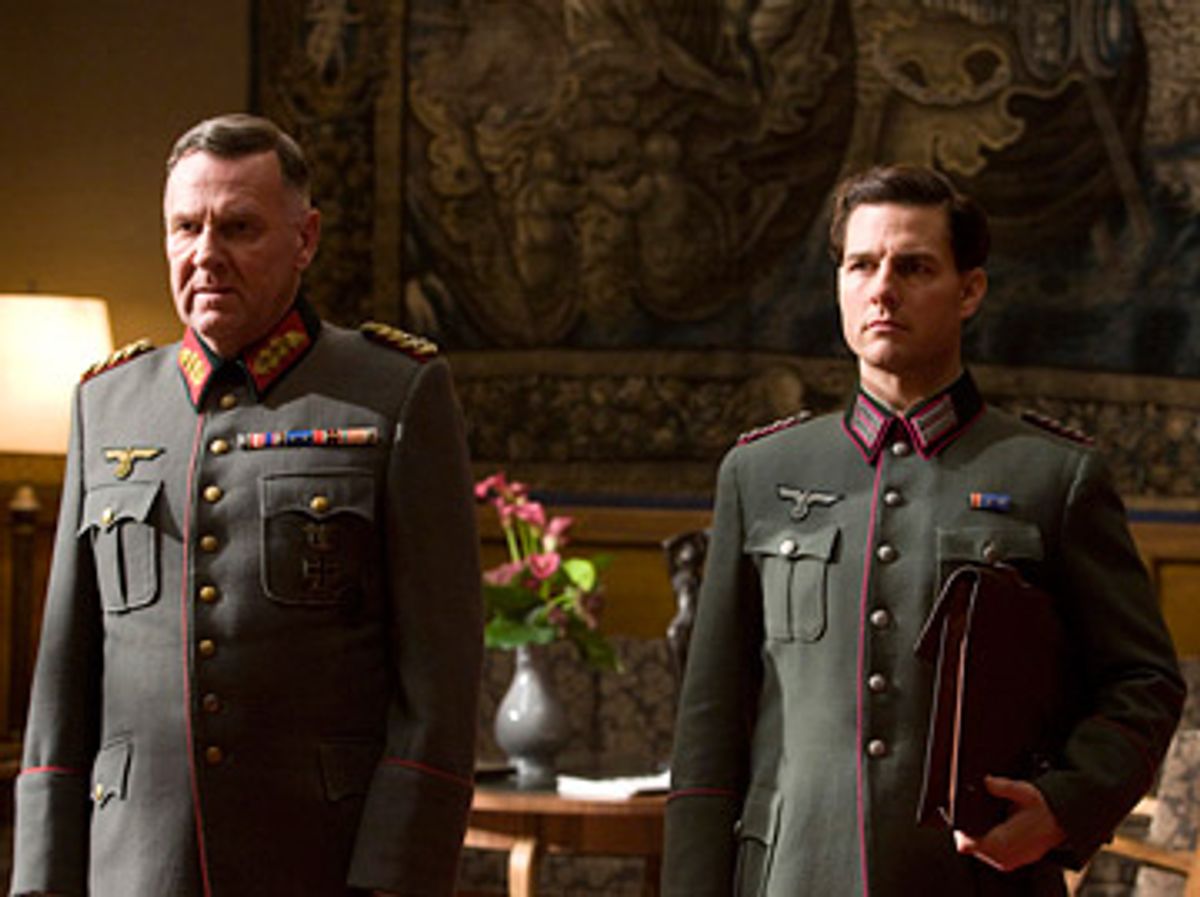 Bryan Singer's "Valkyrie" has been kept under tighter wraps than the actual plot to assassinate Hitler. The release date was moved hither and yon several times, and the movie began screening relatively late for critics during the busy holiday season, and some had to talk their way into being invited at all. It's not always easy to read a studio's motives in keeping movies shielded from early coverage: It could mean they think they've got something that's worth protecting -- or something worth hiding as long as possible, as a form of damage control.

Or it could mean that said movie features a once-huge star who may not have the drawing power with audiences he once had, and who may feel he needs a degree of protection from possible criticism. Tom Cruise, who dominates "Valkyrie" as Col. Claus von Stauffenberg, the aristocrat turned officer who came close to assassinating Hitler in 1944 by sneaking a bomb into his private conference room, has become He Who Cannot Be Named unless you're going to say something nice. He's also the weakest link in "Valkyrie," which is neither a masterpiece nor an embarrassment, but a workmanlike picture that sits, inoffensively, in the middling space between.

The titles at the end of "Valkyrie" tell us there were 15 known attempts on Hitler's life, although the one dramatized here, masterminded by operatives in the German resistance, is the best-known, partly because it came so close to succeeding and partly because it resulted in the execution of some 200 conspirators. Out of necessity, Singer and his writers, Christopher McQuarrie and Nathan Alexander, have condensed the number of players in the story: On the good guys' side are, among others, Bill Nighy's Gen. Friedrich Olbricht, Kenneth Branagh's Maj. Gen. Henning von Tresckow, Terence Stamp's Gen. Ludwig Beck and, of course, Cruise's Stauffenberg. On the side of those remaining to be convinced (with varying degrees of success) are Tom Wilkinson's Gen. Friedrich Fromm and Eddie Izzard's Gen. Erich Fellgiebel.

That's a lot of uniforms to keep straight, and although Singer does an admirable job of making sure that most of the main characters emerge distinctly, this isn't an actors' movie. Singer is better with the mechanics of the story, which are both complicated and fascinating: The operatives knew that it wouldn't be enough just to assassinate Hitler, or Hitler and SS leader Heinrich Himmler. They would need to take control of the government as well, and their chief tool for doing so would be Operation Valkyrie, a contingency plan that, as the movie explains it, had been conceived by the German military as a way to contain civil unrest in the event of Hitler's death, or if his power were somehow compromised. Stauffenberg (whose position allowed him close contact with Hitler) and his co-conspirators would first assassinate Hitler with concealed explosives and then, somehow, get Friedrich Fromm to initiate Operation Valkyrie. (He was the only officer with the authority to do so.) They could then move forward in disarming the SS and arresting other Nazi leaders.

Obviously, the plan didn't work -- "Valkyrie" also briefly dramatizes an earlier plot, in which a Cointreau bottle cleverly rigged with explosives fails to go kaboom -- and in this detailed procedural, Singer outlines all the hows and whys of its failure: There's a tense briefcase switcheroo, and some furtive fumbling with a small detonator thingie. This is the stuff of which suspenseful dramas are made. But "Valkyrie" drags a bit ponderously for the first two-thirds, as Singer and his screenwriters dutifully set up the mechanics of the murder and subsequent takeover plot. It's all necessary information, presented authoritatively. But does it have to be so drab and lifeless? The movie's color scheme doesn't help much: Shot by Newton Thomas Sigel in a palette of institutional grays and greens -- predictable Nazi colors -- "Valkyrie" has the look of a movie that's only following orders.

"Valkyrie" can't decide if it wants to be a sturdily constructed modern-style thriller (McQuarrie also wrote Singer's first big hit, "The Usual Suspects") or an old-timey suspense entertainment packed with movie conventions. Singer throws in a little from Column A and a little from Column B, and not all of it works. Just before Stauffenberg sets out to finalize the assassination plot, he bids his wife, Nina, played by Carice van Houten (the terrific actress from Paul Verhoeven's "Black Book," in a smallish role), goodbye. The moment turns mawkish when he reminds her that if he's caught, the authorities will come after her and the couple's children, too. The camera drifts down from Nina's face to show her hand clutching her dressing-gown-clad stomach, the semaphore used in the old days to signal that a character is "with child." Conventions like that aren't necessarily clichés -- it all depends on how they're executed -- but Singer doesn't always have good control over these melodramatic flourishes. Too often they jangle the tone of "Valkyrie." The story -- we're talking about a bunch of guys trying to kill Hitler, for God's sake -- has enough drama on its own; who needs the extra hokum?

But the picture starts moving along more briskly in the last third, as Singer and his writers get into the groove of balancing all the little ways in which the scheme goes wrong -- and right. And maybe "Valkyrie" gets more interesting as it steams toward the climax because by that point, we're distracted from fixating on the almost uniformly lousy performances of the actors. A colleague of mine said that he thought "Valkyrie" would be memorable only because every single actor in it -- with one exception -- gives the worst performance of his career. I'm not sure he's completely right -- I think I've seen Tom Cruise much worse -- but he's got a point. It's strange to see people like Nighy, in particular, fluttering around the picture like a nervous bird. I'm sure there were nervous German generals in real life, but Nighy just comes off as dithery and high-strung. Wilkinson is sometimes a terrific performer ("In the Bedroom") and sometimes a massive scenery chewer ("Michael Clayton"); here, he settles into a comfortable groove of Naziformity, though he's not particularly engaging to watch. But poor Izzard -- a genius as a comic and often an extremely appealing actor too -- has it the worst. I don't think it's in Izzard's blood to be able to play an uptight German army officer with a straight face. Everything he does -- from his mannerisms to his clipped line readings -- comes off like an impersonation of some famous person you just can't place.

It's a shame that most of the actors in "Valkyrie" can't find their footing, considering that one of the most compelling facets of this story is the way it distinguishes between men who knew enough to think for themselves and those who just went around following orders. The story at the heart of "Valkyrie" recognizes that there were members of the German military who saw the damage Hitler was doing to their own country, not to mention the rest of Europe, and who were determined to take action. One actor in particular, Stamp, brings that idea home: His final scene is extraordinary, a moment of uncomplicated grace that temporarily stops the movie cold.

Cruise stops the movie too, but in a different way. Stauffenberg makes for a dramatic-looking character, all right: In 1943, while he was stationed in Africa, he was injured by British bombs and lost his right hand, several fingers on his left hand and his left eye. And like many other officers in the German army, he came from a refined, aristocratic background: He was a man of ideas and probably had superb posture to boot.

Cruise does OK in the posture department: He's had years of experience marching around self-importantly in movies, so playing a German officer isn't such a stretch. And he does have one good moment, as Stauffenberg stares himself down in the mirror during a morning shave: He confronts his reflection, and that empty, shriveled eye socket, with a degree of determination that seems to have been summoned from the core of his very being. Unfortunately, that doesn't much help his diction. At one point, Stauffenberg raises objections to certain parts of the assassination scheme: "What are you going to do?" he asks. "How are you going to deal with Goebbels, the SS?" Except the words that come tumbling out of his mouth are, "What're you gonna do? How're you gonna deal with Goebbels, the SS?"

Whassup with that? And sue me: Every time I looked at Cruise's solemn, self-serious visage, I kept seeing a chipmunk with an eye patch. I do have some sympathy for Cruise. After a career of coasting on his regular-guy boyishness, he's now well into middle age, and while actors have it easier than actresses as far as that goes, in Hollywood, advancing age is no one's friend -- especially if you first made a name for yourself as a teenager dancing around in your underwear.

Then again, wouldn't now be a good time for Cruise to start figuring out how a German army officer -- an aristocrat -- might actually speak, instead of riffing on stuff he remembers from "Top Gun"? In "Valkyrie," Singer decided to let all the actors use their natural accents, instead of speaking with a German one. It's a choice with pluses and minuses, but at least it allows an actor to shape a performance in the way he's most comfortable with. But maybe Cruise is just too comfortable in the role of Tom Cruise. In his own personal land of make-believe, you can become someone else just by donning an eye patch. But that doesn't mean you had much depth perception to begin with.