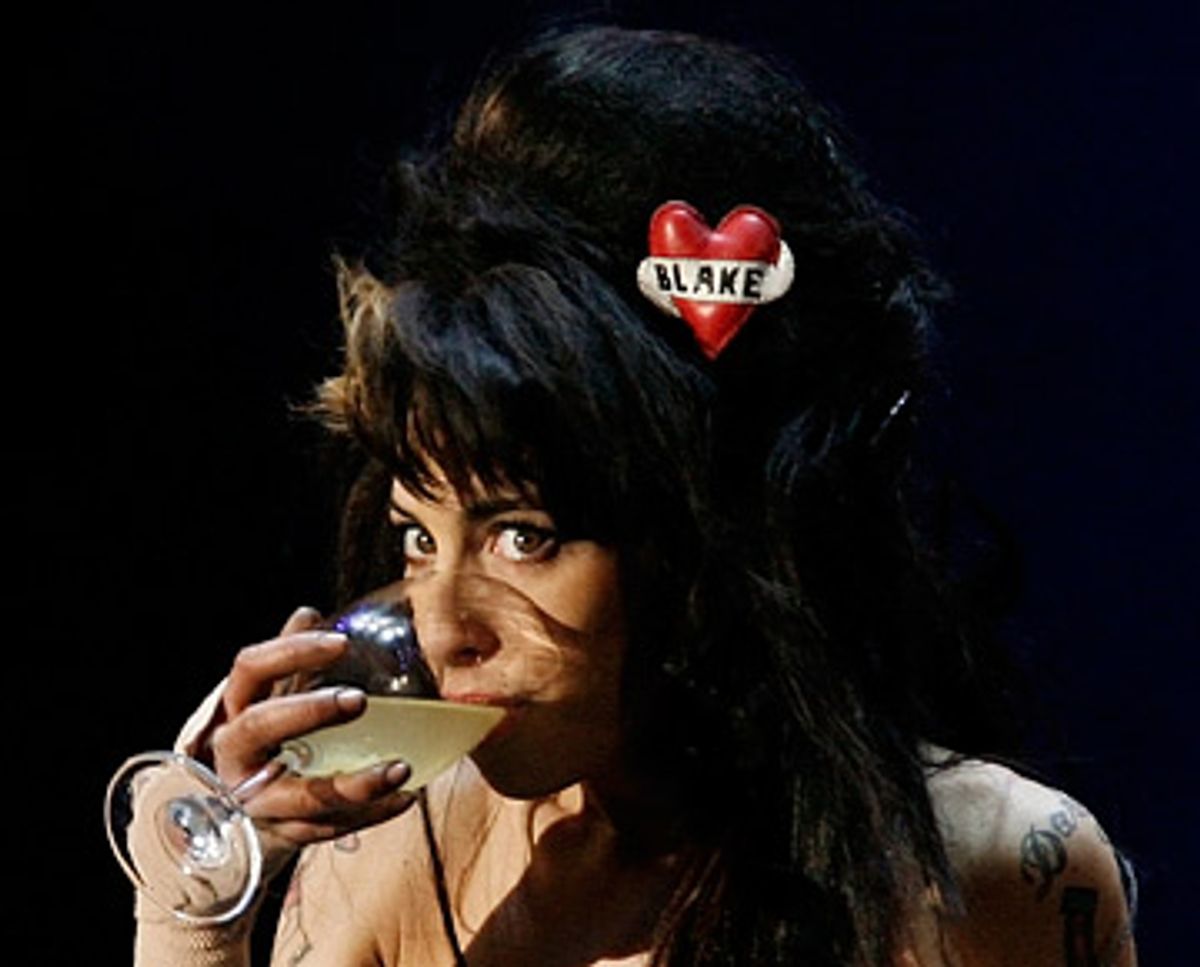 If you care deeply about Heidi Montag and Spencer Pratt -- "The Hills" stars whose cloying mugs and romantic melodrama dominated the cover of an alarming number of gossip rags -- then 2008 was a banner year for you. If you savor hand-wringing debate over Miley Cyrus' exposed body parts, if you actually give a rip that Madonna ditched her husband for a baseball star who resembles a wax statue, if you crave constant updates on the spermination of Angelina Jolie -- well, then, this was a great year in celebrity scandal.

For the rest of us? Not so much. The year kicked off on January 22 with the shocking accidental death of Heath Ledger. The story had all the familiar and sordid mixings of juicy tabloid tragedy: Drugs! Depression! A heartbroken (and famous) ex-wife! An Olsen twin! And yet, Ledger's death wasn't fun, wasn't funny, wasn't the kind of downward spiral whose images you pass around like Christmas snapshots -- images like, say, a bald Britney Spears banging on an SUV with an umbrella or Lindsay Lohan passed out in a car. No, the demise of Heath Ledger was dark, baffling, sad. For years, as celebrity shenanigans grew increasingly more ridiculous, more desperate and anguished, it seemed inevitable that some public tragedy would cast a pall over the bitchy fun of celebrity gossip. Who knew it would involve a spotlight-shunning actor who had only just completed his most stunning performance yet?

The celebrity industrial complex was already maxing out in 2007, when Heather Havrilesky wrote, "What's fascinating and disturbing about this moment in our culture is this pervasive feeling of vertigo, the push and pull of new media marginalizing the more historically weighty stories while the flashiest trivia holds the camera's gaze." It seemed that nothing mattered as much as David Hasselhoff drunkenly snarfing a burger or Alec Baldwin screaming at his poor daughter, and it looked like that trend might continue until, as Mike Judge had joked in his 2006 satire "Idiocracy," the country was run by a camera-hogging professional wrestler. Celebrity minutiae and misdeeds became a kind of media wallpaper overshadowing real stories like the war in Iraq and concern about the economy. (The economy? Who cared about the economy?)

But then, the culture shifted. Politics seemed, weirdly, like something we could believe in again. Empty gossip felt, well, emptier. As Rebecca Traister wrote back in March, in a terrific and prescient piece about the demise of celebrity gossip, "The pleasure we take in snurfling through the trash bins of those more rich and famous than we seems to be waning, leaving me a little sad," Traister wrote, "but perhaps, at the end of the day, just a little less dumb."

As the most stirring election in recent memory revved up, the daily banalities of A-list celebs like Tom Cruise, Jennifer Aniston, George Clooney and Brad Pitt took a back seat to rumor-mongering about Sarah Palin and a discussion of whether or not Barack Obama wore boxers or briefs. In May, Us Weekly editor Janice Min told the New York Times, "When you look at the great celebrity dramas of the last few years, you have Team Aniston, Team Jolie, Team Heidi and Team Lauren. And now we have Team Hillary and Team Barack."

But it wasn't merely the high voltage of the political season that tanked celebrity gossip. The industry itself had badly overreached -- like Wall Street, the real estate market, Starbucks and every other American enterprise bent on total domination. Supermarket stands had become a hot mess of tawdry tabloids. (Who were the people so unsatisfied with Star, People and Us Weekly that they required Celebrity Living, too? Well, whoever they were, there weren't enough of them. The magazine folded earlier this year.)

By late December, even celeb site Jossip raised the white flag in a post called, "Gossip's Dead and It's Everyone's Fault." The item offered a brief summation of the fallen soldiers on the field: "Ben Widdicombe was the first to go, ankling his post as the New York Daily News' most respected gossip columnist. Next were Rush & Molloy, the married gossips who since 1995 had also penned a column for the Daily News -- they wanted to focus on other stories for the paper. Then Jo Piazza, whose scuttlebutt replaced Widdicombe's, quit, too. Jossip's gossip-oriented sister site Mollygood shut down, much like the short-lived PageSix.com before it. Also, tabloid sales continued to shrink." Layoffs hit Gawker and its sister site Jezebel. TMZ, which had so zealously launched its own TV show in 2007, ended the year with a decrease in readership -- a rare occurrence online, where new users appear by the minute. It seemed deeply symbolic when Mr. Blackwell -- the bitchy tabloid queen responsible for "The Worst Dressed List," a Schadenfreude tradition that gave birth to a gazillion "fashion police" -- passed away in October. It was fitting, almost. The end of an era. Or, depending on your perspective -- an error.

It was 20 years ago that Brat Pack pretty boy Rob Lowe scandalized the country by making a sex tape with two women he'd picked up in a bar, one of whom turned out to be (gasp!) 16 years old. The event was, in many ways, the beginning of the modern tabloid age and a glimpse at the two decades to come, in which celebrity scandal captivated the public imagination, whether it was pop royalty dethroned (Michael Jackson, Britney Spears) or beloved role models besmirched (OJ Simpson, Woody Allen and, of course, Michael Jackson) or pretty-boys-turned-prison-mates  (Robert Downey Jr., Tupac, Kiefer Sutherland) or the parade of attention-starved exhibitionists who seized the spotlight in the first part of this decade, the LiLos and the Brit-Brits and the MTV reality queens. It is almost quaint to think of Lowe's sex tape now: A romp with two chicks, one of whom lied about her age. People were outraged! Fast forward 15 years or so, and R. Kelly is pissing on 14-year-old girls and still making hotly anticipated albums.

But the sheer volume of celebrity scandal has ground us down, made us cynical and mean-spirited. It's damned hard to care anymore, to respond to souls in crisis with little more than a sneer of contempt and one giant eye roll. Just consider the case of Amy Winehouse, the English crooner and tabloid favorite who has been in a spiritual and chemical freefall since she first hit the charts in 2006. Things looked bright when she finally fled to rehab in January 2008 -- after a series of epic, bloody blowouts -- but by June she was flailing again, with cuts on her arms and troubling reports of early-stage emphysema. By December 2008, she was back in rehab once more. And all of it was so grim, so ugly and hopeless -- an implosion via RSS feed -- that you would be forgiven for failing to care. After all, was it really such sport to laugh at a woman with a black eye and a fat lip, a woman lurching through a darkened street with broken heels and a glazed, pained look in her eyes? Was it really still funny? Had it ever been?

Of course, there were a few celebrity scandals of the old-fashioned variety in 2008. Lindsay Lohan began dating a woman, Samantha Ronson (and appeared -- finally, if only temporarily -- calmed by it); Britney Spears made yet another comeback and was dogged by yet another series of reports about her dangerous weight loss and failures at mommyhood; Gwyneth Paltrow and Coldplay's Chris Martin were reportedly on the outs; Hulk Hogan split with his wife Linda, who  began dating a 19-year-old. Then there were the happy endings and silver linings: the surprise weddings (Mariah Carey and Nick Cannon), the shotgun weddings (Ashlee Simpson and Pete Wentz), the high-pressure engagements (Jamie-Lynn Spears and whoever is engaged to Jamie-Lynn Spears), the about-time weddings (Jay-Z and Beyonce Knowles) and the straight-up tear-jerkers (Ellen Degeneres and Portia de Rossi). Oh, and I almost forgot: Clay Aiken's gay. Does that count as celebrity scandal? Hmm. I didn't think so.

Oddly, the year's most interesting celebrity gossip came from a thoroughly unlikely source: Tina Fey. Bolstered in no small part by her eerie resemblance to a certain vice-presidential nominee (and her classic "Saturday Night Live" performances), Fey found herself in the national spotlight and landed a $6 million book deal at a time when the bottom was practically falling out of the publishing world. Her NBC comedy "30 Rock" -- once dismissed as a doomed critical darling -- boasted cameos from no less than Oprah Winfrey, Jennifer Aniston and Steve Martin. Fey graced the cover of Vanity Fair twice in one year, with a profile that painted her as the ultimate anti-celebrity: a teetotaler, a tireless worker, a boring homebody happily married to a nice guy. And the story of how she got that mysterious scar on her chin -- she was cut in her front yard at the age of 5 -- made national news. (Our Tina Fey? Yes, our Tina Fey!) As Britney Spears continued to disappoint, as critics threw tomatoes at Tom Cruise in their early reviews of "Valkyrie," Fey emerged as the scrappy hero of recession-era America: a self-made woman with real brains -- and real boobs!

They say that celebrity is a reflection of how a culture would like to see itself. And though I shudder to think what the long and shameful reign of Paris Hilton says about our country, what I do know is that I'm glad Tina Fey has the crown these days. It was about damn time for a regime change.