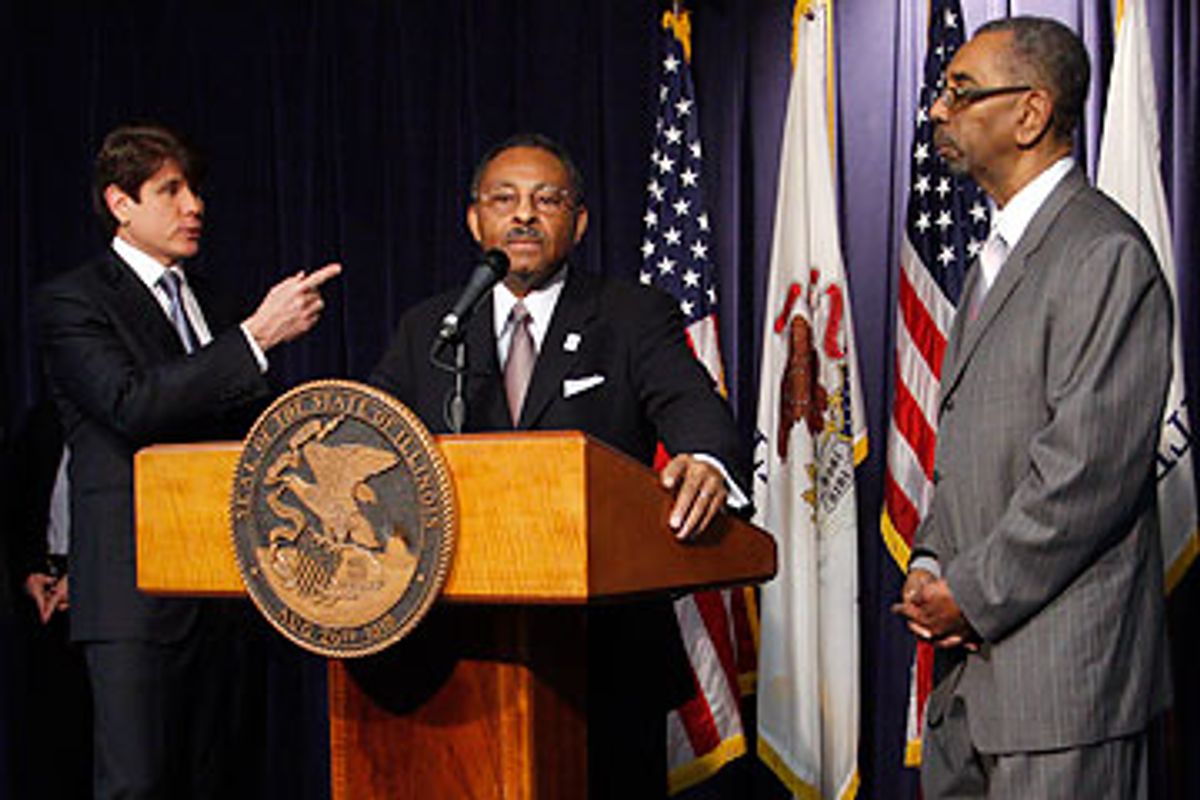 (Updated with Obama statement, below.)

Say what you will about Rod Blagojevich: He's always surprising. Under the cloud of federal charges that he tried to essentially sell Barack Obama's Senate seat, on Tuesday the Illinois governor went ahead and appointed former Illinois Attorney General Roland Burris to the now very hot seat. It was a wily choice: The first African-American elected to statewide office in Illinois, Burris ran against Blago for governor in the Democratic primary in 2002, with Obama's support.

At a raucous press conference marked by the surprise appearance of Rep. Bobby Rush to support Burris, Blagojevich laid out his case. After wishing the crowd a "prospero año," yes, in Spanish, he argued that "the people of Illinois are entitled to have two United States senators." He called the former attorney general "an individual who has unquestioned integrity" and "a wise and experienced senior statesman. This man was actually once an opponent of mine for governor ... Please don't allow the allegations against me to taint this good and honest man." Then he introduced Burris. Referencing the global economic meltdown and the "triple threats" of war in the Middle East, Iraq and Afghanistan, Burris argued that "it is incomprehensible that the people of the great state of Illinois would enter the 111th Congress shorthanded." Although earlier this month Burris said Blagojevich should step down, on Tuesday he refused to comment on the charges against the governor, but reminded reporters of the presumption of innocence.

All hell broke loose during the press conference, as reporters asked how much Burris' law firm had contributed to the governor, and Burris and Blagojevich took turns at the podium. Then a frail-looking Rep. Bobby Rush, the former Black Panther who represents Obama's district in Congress, made his surprise appearance. "My prayers have been answered ... that the governor would appoint an African-American to complete the term of President Obama." Rush reminded the crowd there is no African-American in the U.S. Senate, and that Illinois has elected two black senators, Obama and Carol Moseley-Braun (although Burris endorsed Alan Dixon over Moseley-Braun in the 1992 Democratic primary). "It has tremendous national importance," said Rush, who defeated Obama to keep his House seat in 2000. Rush promised to lobby his "friend," Illinois Sen. Dick Durbin, to change his mind and back Burris and urged observers not to "hang or lynch" the black Democrat.

Before Blagojevich's press conference, Senate Democrats announced they wouldn't seat Burris, but there is some question about whether they can actually do that. In 1969 the Supreme Court ruled that the House of Representatives couldn't refuse to seat Harlem's scandal-damaged Adam Clayton Powell Jr. after he'd been duly elected. Illinois Secretary of State Jesse White has said he would not certify a selection by Blagojevich. How much race will play a role is uncertain; Burris has become a marginal figure in Chicago politics, having run and lost a quixotic independent campaign for mayor against Richard Daley in 1995, as well as primary campaigns for governor in 1998 and 2002. Illinois Lt. Gov. Pat Quinn called Burris a "good man" on Tuesday but said he regretted his decision to accept the appointment by the "disgraced" Blagojevich. "This governor needs to go," Quinn said.

Update: President-elect Obama came out against the Burris pick Tuesday afternoon, and released this statement:

Roland Burris is a good man and a fine public servant, but the Senate Democrats made it clear weeks ago that they cannot accept an appointment made by a governor who is accused of selling this very Senate seat. I agree with their decision, and it is extremely disappointing that Gov. Blagojevich has chosen to ignore it. I believe the best resolution would be for the Governor to resign his office and allow a lawful and appropriate process of succession to take place. While Gov. Blagojevich is entitled to his day in court, the people of Illinois are entitled to a functioning government and major decisions free of taint and controversy.

Here's the full text of the Senate Democrats' letter:

It is truly regrettable that despite warning from all 50 Democratic senators and public officials throughout Illinois, Gov. Blagojevich would take the imprudent step of appointing someone to the United States Senate who would serve under a shadow and be plagued by questions of impropriety. We say this without prejudice toward Roland Burris's ability, and we respect his years of public service. But this is not about Mr. Burris; it is about the integrity of a governor accused of attempting to sell this United States Senate seat. Under these circumstances, anyone appointed by Gov. Blagojevich cannot be an effective representative of the people of Illinois and, as we have said, will not be seated by the Democratic Caucus.

Next week we will start one of the most important debates of the year outlining an economic recovery plan to create jobs and invest in America. And in the coming weeks, we will be working to protect homeowners and consumers, make America more energy independent, strengthen our national security, and improve health care and educational opportunities. There is much work to do and a lot at stake. It is thus critical that Illinois and every other state have two seated senators without delay.