PUMAs on the prowl; an apology to boomers; the books that made Obama, Obama; hooray for casual sex -- and more of our favorite stories of the year. 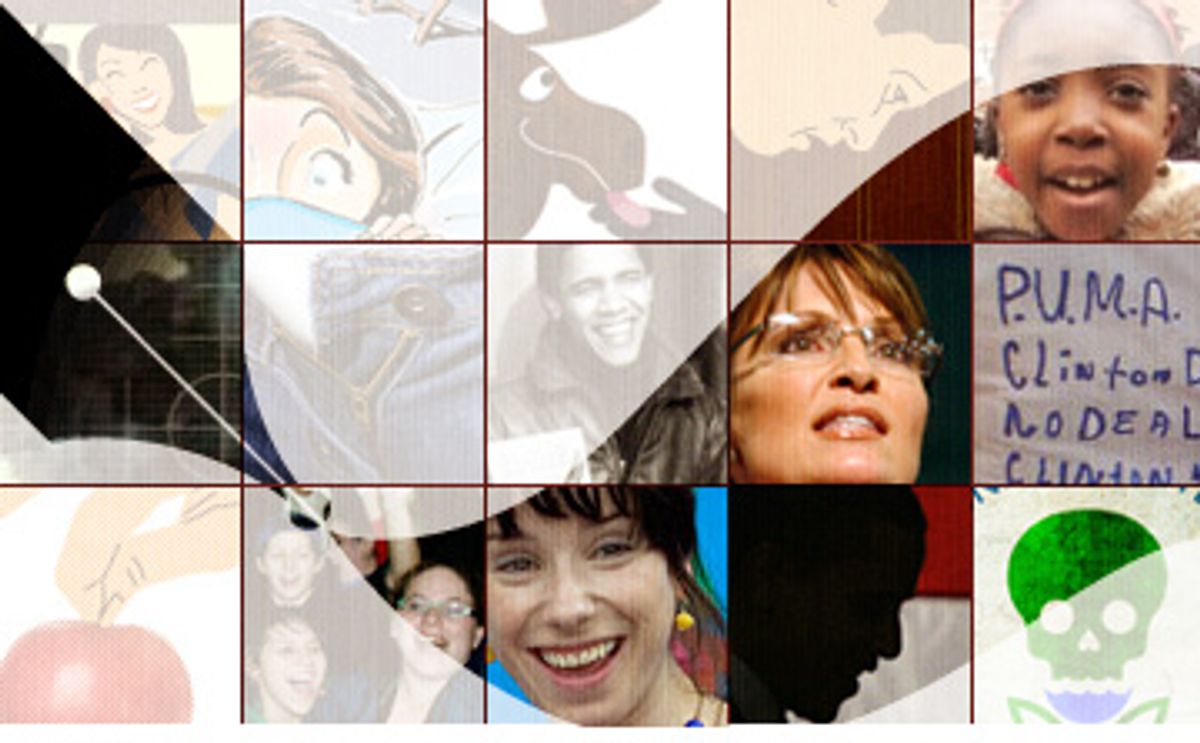 Jesus loves you -- and your orgasm
The religious right is celebrating sex to stroke its conservative message. Liberals better rise to a secular defense soon.
By Louis Bayard

Friendly fire in Iraq -- and a coverup
The Army says no, but a graphic video and eyewitness testimony indicate that a U.S. tank killed two American soldiers. The mother of one soldier demands answers.
By Mark Benjamin

In defense of casual sex
A new raft of chastity books laments a hookup culture that is hurting young women. As one of those young women, I beg to disagree.
by Tracy Clark-Flory

The bowel movement
What is your poo telling you about your health? It's the burning question that has everybody's head in the toilet these days.
By Leslie Crawford

CNN, the Pentagon's "military analyst program" and Gitmo
Government documents show that the media was complicit in the military's extensive domestic propaganda campaign.
By Glenn Greenwald

Multiracial man
The Obama campaign's deft use of the candidate's mixed heritage is making it harder to read his candidacy in terms of race.
By James Hannaham

An open apology to boomers everywhere
Your earnest, self-important prattle has gotten on Gen X nerves for decades. But now we finally get it.
By Heather Havrilesky

My big, fat, unpaid credit card bill
When the statements piled up and the creditors started calling, I had to do the unthinkable -- confront my mounting debt.
By Sarah Hepola

The Great Depression: The sequel
Is it coming to a soup kitchen near you? Here's how we'll know if the current recession is turning into something much worse.
By Andrew Leonard

Obama and the dawn of the Fourth Republic
His victory really may mark the beginning of a new era in American history.
By Michael Lind

Blood in the water in North Carolina
Republican Sen. Liddy Dole may be a goner, and John McCain is in trouble in a state the GOP hasn't lost since 1976. What happened?
By Mike Madden

How to solve America's water problems
Hey, Sun Belters, move to the Great Lake states. You can have all the water you want and stop worrying about droughts. Besides, we're not piping our water south.
By Edward McClelland

Hang up and drive
Think driving while talking on the cellphone is safe as long as you use a headset, as new laws require? Stop yammering and read this article.
By Katharine Mieszkowski

Barack by the books
The works that have influenced Obama illustrate that he would be the most literary president in recent memory -- and one likely to govern from the center.
By Laura Miller

Anti-science conservatives must be stopped
Americans must not allow global warming deniers to block the policies needed to avert catastrophic climate change. Our future is at stake.
By Joseph Romm

(Video)
Who are the kids voting for?
We talk to kids at a Brooklyn, N.Y., polling place about what it's like to make history.
By Caitlin Shamberg

Bill Ayers talks back
Sarah Palin called him a terrorist, Barack Obama called him an acquaintance. A Salon editor who knew Ayers back when talks to the ex-Weather Underground member turned Republican talking point.
By Walter Shapiro

"I fear for my country"
Former Gov. Tony Knowles and other Alaska Democrats warn not to underestimate Sarah Palin's political skills -- or how unsuited she is for the vice presidency.
By David Talbot

Angry PUMAs on the prowl in Denver
They don't care if they make Chris Matthews happy, or if they make Hillary Clinton look bad. They don't even care that she wants them to stop.
By Rebecca Traister

Team America
Barack Obama's national security team is impressive in its diversity and in its excellence. Plus: I debate Christopher Hitchens over Hillary Clinton.
By Joan Walsh