It was the worst of times for ordinary Americans. And even worse times for deregulators and supply-siders. The bright side? Their party is over. 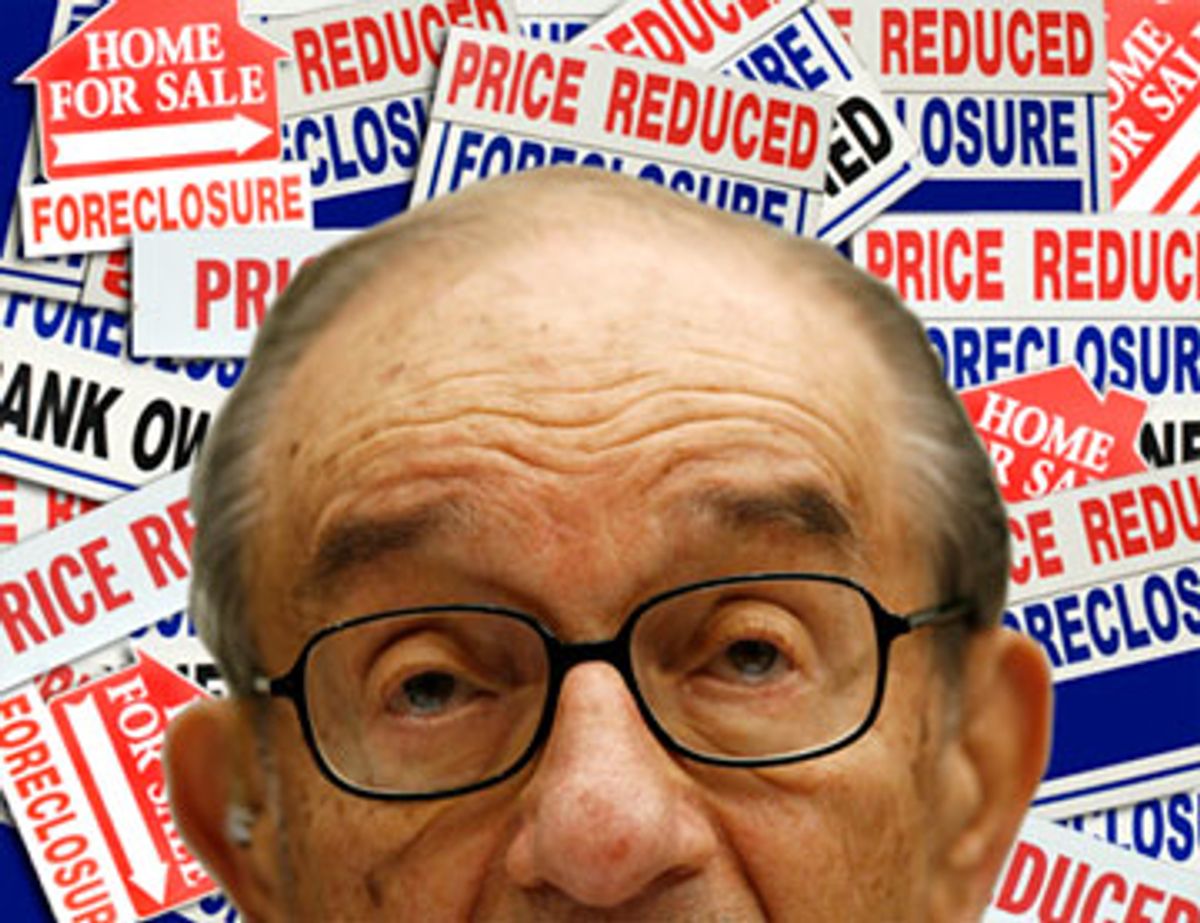 Of all the economic earthquakes that racked the global economy in 2008, one temblor ranks supreme. Alan Greenspan's declaration to Congress on Oct. 23: "I made a mistake."

In those four words can be heard the crumbling of at least three decades of ideological dominance. Technically speaking, Greenspan was acknowledging that he had misjudged the private sector's ability to manage risk in a largely deregulated environment. After all the carnage on Wall Street in 2008, the conclusion, even to Greenspan, was inescapable: High finance's best and brightest had proved incapable of understanding their own business.

We will be mulling over the extraordinary economic events of 2008 for years to come. We could have plenty of morbid fun, right now, reliving the nightmare in horrific detail: the collapse of the subprime-mortgage-backed securities market; the demise of Bear Stearns and Merrill Lynch; the bankruptcy of Lehman Brothers; the "rescue" of AIG; the great drama of the fight to authorize the Troubled Assets Relief Program, complete with John McCain's ludicrous, and revelatory, campaign "suspension," and the sight of Hank Paulson on bended knee before Nancy Pelosi. We would be remiss not to note the wild swings in all kinds of commodity prices, not least the surge of gas and oil prices to record highs, followed by an even more amazing tumble. A historically unprecedented implosion of the U.S. residential housing market achieved the previously unthinkable: The American consumer juggernaut halted dead in its tracks.

Oh, and the economy played a critical role in the outcome of an epochal presidential election. No little thing, that. And finally, as the year came to a close, we can try to enjoy our holidays while wondering whether the really bad stuff is only just getting started. 2009 could be much worse than 2008.

That's quite a year, and what's most astonishing is how much has happened just since September, and how dramatically the stakes have grown. In April, I wrote a story for Salon asking the intentionally provocative question: "Is this recession another Great Depression?" But even I was skeptical of the thesis -- at the time I wasn't totally sure we were in a recession. I certainly did not anticipate that before the end of the year the treasury secretary and Federal Reserve chairman would be begging Congress for $700 billion to rescue failing financial institutions, or that General Motors would be facing a real likelihood of bankruptcy, or that the president-elect would be promising a half-trillion-dollar economic recovery plan as his first order of business. Heck, back then I even dared suggest the possibility that the economic stimulus checks due to arrive in taxpayer mailboxes in May might avert a serious downturn.

But all those events are just chaff strewn by the wind in the face of the true economic significance of 2008: the narrative of how Americans view politics and the economy has changed. Even according to Alan Greenspan.

2008 was a very bad year for ordinary Americans in real, cash-on-the-barrelhead terms. But it was also an awful year for market fundamentalists, deregulators, supply-siders and acolytes of Milton Friedman and Ayn Rand. Their three-decade-long party is over.

This is not to say people aren't still arguing, heatedly and with great sophistication, about such topics as the role that credit default swaps played in precipitating the financial crisis, or the question of how much blame can be attributed to the repeal in 1998 of Glass-Steagall's separation of commercial and investment banking (or even whether Franklin Roosevelt rescued the U.S. from the Great Depression or just made it worse). But there is no ignoring the sacred cow that lies gutted, innards steaming, on the altar. In 2008, we witnessed a market failure of epic proportions. Whatever moral authority the deregulators thought they might have had -- that sense of superiority that came from the calm confidence that their interpretation of how the world works is the correct one -- is gone. Politics will not be the same for a generation.

That's a big deal, if not necessarily a promise of a new deal.

The story of how a particular kind of mortgage loan proved to be the undoing of Wall Street and the catalyst for the end of a period of sustained global economic growth is at once insanely complex and, by now, almost too familiar. We now know that dereliction of duty ran rampant at every step of the chain. Mortgage borrowers lied about their income. Mortgage lenders failed to check the credit-worthiness of borrowers. Banks restructured loans into derivative instruments that obscured the underlying liabilities. Credit rating agencies -- dependent on fees from the very institutions whose products they were supposed to be judging -- gave the newfangled securities gold-plated ratings. Government regulators looked the other way. We now know that the incentives built into the system encouraged every individual actor to act in defiance of economic rationality.

We now know, in other words, that left to themselves, economic actors do not pursue rational, sustainable courses of action. Greed and self-interest will steer you into the ditch every time.

There were warnings along the way. Cassandras who feared that exotic financial innovation, specifically unregulated at the behest of both Democratic and Republican politicians, was setting the stage for a major systemic shock. But their voices were drowned out by a chorus of status quo defenders who told us, again and again, that financial innovation was making the world a safer, less risky place.

By slicing and dicing risk and redistributing it across the world, we were told, the chance that any one shock could destabilize the entire system had diminished. Even better, ran the argument, policymakers had learned the lessons of the Great Depression so well that there was no chance there could be another depression. One of Ben Bernanke's claims to fame was as the proselytizer of the idea that we live in the age of the Great Moderation, an era in which recessions would be mild, growth stable and financial panics a thing of antiquity.

They were wrong. If there is one lesson to take from 2008 it is that the majority of analysts, economists and Wall Street financiers were flat-out wrong. Instead of redistributing risk to make us safer, they tied the whole world up into such a tightly wound ball of interconnections that when one piece of the system broke, the repercussions spread everywhere, immediately.

As a consequence, the self-satisfaction bequeathed to Americans by their victory in the Cold War and their unchallenged status as superpower has been irretrievably punctured and replaced by fear. The world seems far more fragile than it did a year ago. It baffles comprehension that so much could go so wrong so fast.

Where things go from here is anyone's guess. Will a President Obama succeed in pushing a vast new spending program through Congress? How will new regulatory structures work? How bad will the economy get? We don't know the answers to any of these questions, and we can anticipate massive political battles as a new order is hammered out.

But I think we can be pretty sure about one thing: For the foreseeable future it's going to be very difficult for a politician to argue that markets work best when the government stays off the playing field. The phrase "well-regulated markets" suddenly rings with a new vigor. And Wall Street's masters of the universe will be the butt of unkind jokes for decades to come.

Alan Greenspan made a mistake. And a new world is born.