FX's scheming-lawyer drama "Damages" is back for a fast-paced, twisted sophomore season that might just be better than the first. 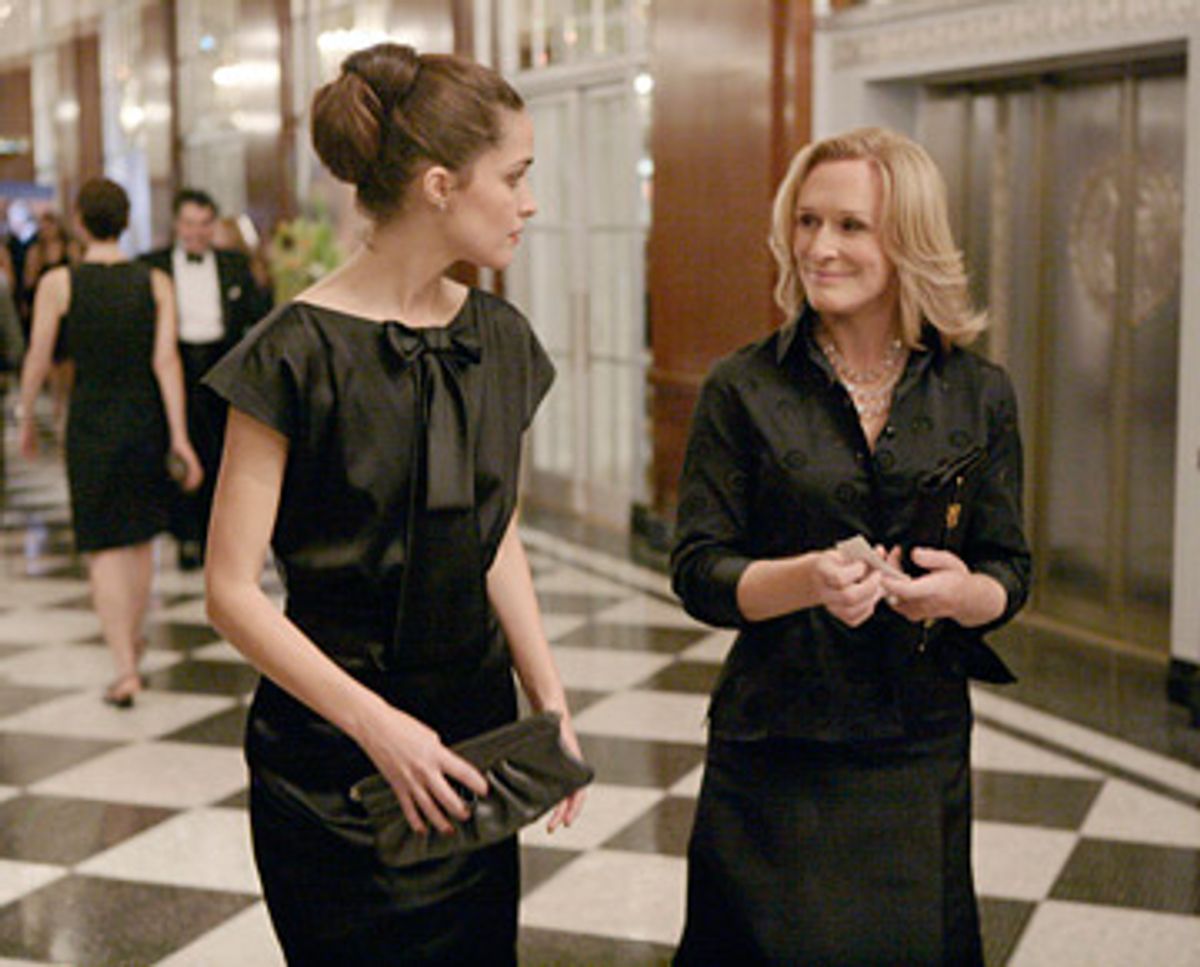 "You have to be careful, Ellen. Everyone is looking to play an angle." -- Patty Hewes (Glenn Close) of FX's "Damages"

The show's sophomore season (premieres at 10 p.m. Wednesday, Jan. 7) once again adds up to a delicious maze of interrelated schemes, cross-purposes and ulterior motives. This is "24" with lawyers, a densely plotted roller-coaster ride of betrayals, yet somehow these master schemes feel far more compelling than the most elaborate terrorist plot to cross Jack Bauer's path in years.

Strangely enough, though, after hissing and seething her way through the show's first season, Patty Hewes feels like the least treacherous character in the picture this time around. Maybe that's because Ellen Parsons (Rose Byrne) has learned a thing or two from Patty in their short time together as colleagues, and she's staunchly determined to take her mentor down once and for all ­-- which is not to mention her revenge fantasies involving Arthur Frobisher, the man who had her fiancé murdered.

Maybe Patty appears a little more sympathetic and fragile this season because she's grappling with whether or not to take on the case of an old acquaintance, Daniel Purcell (William Hurt), for whom she obviously has lingering feelings. And maybe her eeevil nature is so well-established now that viewers need to start believing she can act in vaguely ethical ways again, just long enough for her next shrewd, duplicitous move to shock us all over again.

Whatever the motivation for this shift in dynamics, it works: Ellen's victimization by Patty and Frobisher has transformed her into someone who no longer second-guesses herself, whereas Patty's guilt over the death of Ray Fiske (Zeljko Ivanek) has turned her into someone who does think twice occasionally. With this transfixing role reversal, "Damages" is off to an electrifying start.

That's no small order, either, given the labyrinthine, over-the-top plot of the first season. The show's writers were faced with a tough dilemma: Cast off the Frobisher case and its aftermath to avoid retreading old ground, and risk alienating loyal viewers who might be less interested in a brand-new case on Patty's desk, or revisit Frobisher and risk lingering too long over a story that's at least partially resolved. The writers ended up making the transition perfectly, weaving some of the threads from the Frobisher era into the second season and keeping Ellen traumatized and borderline obsessed with vengeance, while dangling tantalizing clues of what lies ahead for Patty Hewes and Associates. In fact, it only takes two episodes to demonstrate that this season is going to be another wild ride, maybe even one that's a little more nuanced and unpredictable than the first.

Yes, the unsettling flash forwards of the first season are back. Yes, Ted Danson is back, along with Timothy Olyphant ("Deadwood"), Marcia Gay Harden and indie darling Tom Noonan. If watching serious actors play off each other's strengths excites you even more than dueling lawyers, just wait for the scene in the third episode, in which Noonan, who plays a New York City detective, meets with Hurt's Purcell. Noonan is the master of this flavor of smug, slippery smarts, and Hurt has cornered the market on the frantic victim with something to hide. Watching these two pros interact on-screen is just the sort of high-caliber treat we need to cleanse the bad taste of a lackluster fall TV season from our palates.

Best of all, though, the writing and story lines are confident and clever and twisted in ways that suggest that "Damages" co-creators Todd Kessler, Glenn Kessler and Daniel Zelman have already thought through the entire second season, and they know where this story is headed -- namely, straight to hell.

But what else would you expect on a show where no one can be trusted, no one is safe, and everyone is damaged?