Al Franken stole the election? Prove it or shut up

The recount shows that he won the Minnesota Senate race. The lying liars who say otherwise have no evidence of cheating. 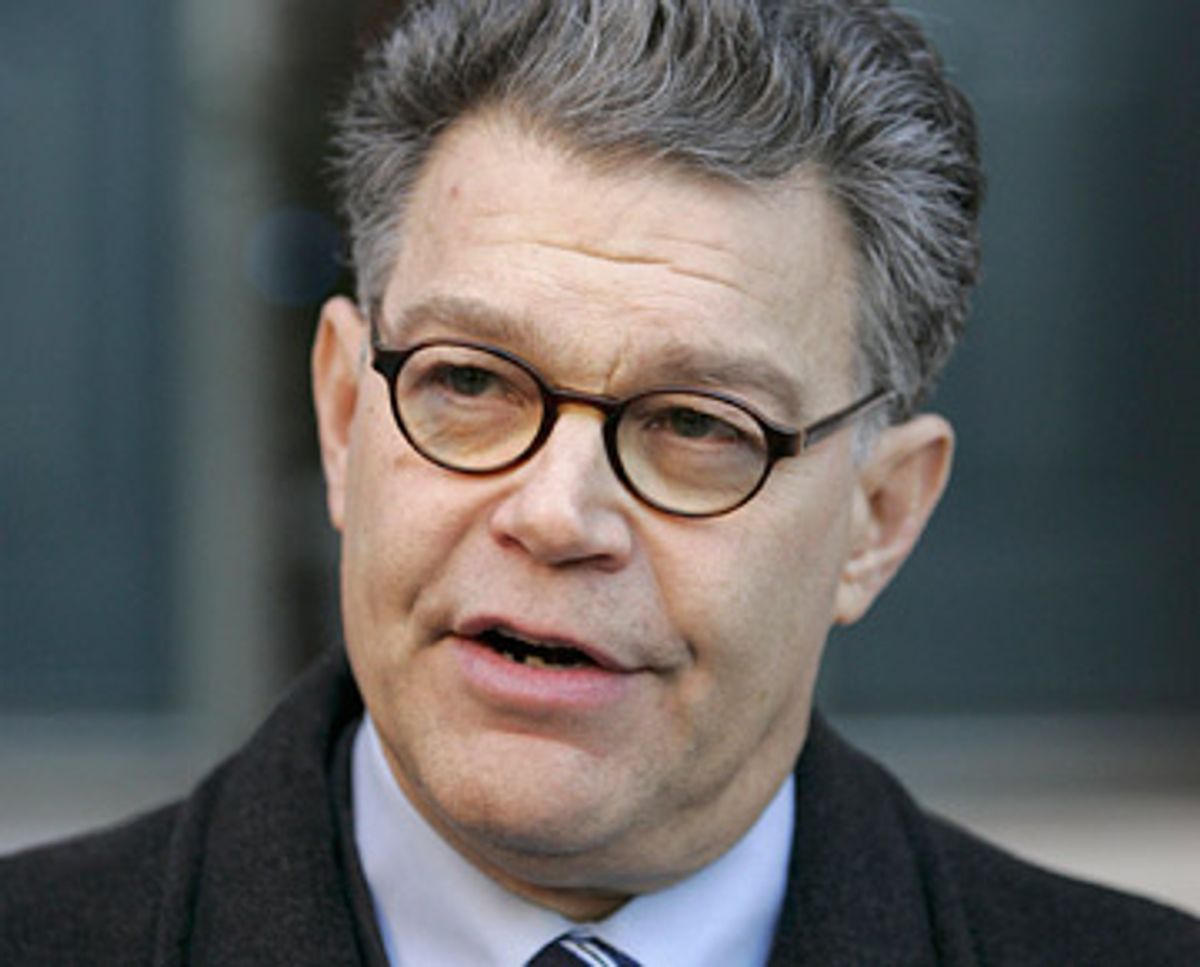 If Al Franken were not a longtime public figure -- and thus severely handicapped by American jurisprudence -- he could file a powerful complaint for libel or slander against several of the most prominent wingnuts in the United States. From Rush Limbaugh to Bill O'Reilly to Richard Mellon Scaife, a chorus of familiar voices is loudly defaming the Democrat whose razor-thin win in the Minnesota Senate race will now be tested in that state's courts. Ever since Election Day, on radio and television, on the Internet and in print, they've screamed that Franken is stealing, rigging, pilfering, scamming, thieving and cheating his way to victory.

These media figures, some of whom occasionally pretend to be journalists, have spewed such accusations repeatedly, without offering any proof whatsoever -- in plain contradiction of the available facts. Not only is there no evidence that Franken or his campaign "cheated" in any way during the election or the recount, but there is ample reason to believe that the entire process was fair, balanced and free from partisan taint.

For Franken's most famous adversaries, spewing lies about him may be a form of cheap revenge. A prime example is Fox News host O'Reilly, who has hated Franken for years, dating back to when the comedian and author berated him in a public debate, then exposed him in "Lies and the Lying Liars Who Tell Them," and ultimately provoked him into filing an ill-advised lawsuit that only generated vast amounts of free publicity for Franken's book before the suit was thrown out of court. Of course O'Reilly was preceded by Limbaugh, that "big fat idiot" whose deceptions and bigotry were featured in the comedian's first bestselling book way back in 1996.

So Limbaugh, quoting an erroneous editorial from the Wall Street Journal, has been ranting about the supposed theft of the Minnesota election for months now. "We did not elect Al Franken," he told a caller on Jan. 5. "He stole the race. They are stealing the race up there blind in front of everybody's nose. They are counting absentee ballots [which election officials are required to do by law]. ... They're counting votes twice -- votes that were rejected, all kinds of things [which election officials ordered after determining that some votes were rejected wrongly]. That's just -- the Democrats are stealing the election up there." Even the Journal's tendentious and sloppy screeds have never quite accused Franken of "stealing" the race or the recount. Rush just made that part up.

On Jan. 7, O'Reilly hosted an appearance by Dick Morris, the former Clinton consultant who lost his job for consorting with a prostitute and has gone into business selling himself to the highest Republican bidder. Aside from Fox News, Morris seems to appear with the greatest frequency on Newsmax.com, the popular right-wing Web site owned by Scaife and operated by Christopher Ruddy, a journalist known mainly for his fanciful theories about the Vince Foster suicide.

"Al Franken -- you think he's cheating?" intoned O'Reilly, as if he didn't know the answer.

"Yeah, I think there's funny business -- funny business going on in Franken's thing," replied Morris, as if he knew exactly what he was talking about. "Sure, he's cheating, and sure that Minnesota's doing it for him. I mean, there's no question that there's cheating going on ... This is outright larceny. This is just a total theft."

But he offered no evidence to support that incendiary accusation, on the O'Reilly broadcast or in the Newsmax column he published that same day, headlined "Stop Al Franken From Stealing the Election." (That column included a link to the Republican National Lawyers Association, which is raising money to assist Coleman's election lawsuit, with a direct endorsement from Morris.) Instead he complained about a few instances in which he disagrees with decisions by the Minnesota courts and election officials, and in particular with the special panel that oversaw the recount. How those disagreements amount to "cheating" or "stealing" by Franken he did not bother to explain.

All the usual suspects have echoed these false charges across the airwaves and the Internet. What they invariably neglect to mention is that the Minnesota Canvassing Board, whose decisions have so displeased the Republican right, was impeccably nonpartisan. Nobody in their right mind in Minnesota believes that the board was biased -- and, in fact, Powerline blogger Scott Johnson, no friend of Democrats or Franken, has specifically spoken up to defend it. "There was no noticeable partisan division among the board," he wrote. "Minnesotans are justifiably proud of the transparency and fairness of their work."

Two of its five members are Supreme Court judges appointed by Tim Pawlenty, the state's conservative Republican governor, each with a long record of loyal service to the GOP; a third is a nonpartisan elected judge; a fourth was appointed by former independent Gov. Jesse Ventura; and only one, Secretary of State Mark Ritchie, is a Democrat. At the outset, Coleman's own lawyers accepted the panel's membership, as did everyone else, including Franken, who might have protested that his own party had only one member.

Their decisions against Coleman, which led to Franken's provisional victory by 225 votes, were unanimous. It is this group, composed of distinguished judges with spotless reputations, whose hard work has been described in odious terms by the likes of Morris, Limbaugh and Ann Coulter.

Here's a challenge to all those lying liars. In essence, they have accused my friend Franken of a felony under Minnesota law. If they know of any evidence that would show he has stolen votes or violated any election statute, let them report it to the state law enforcement authorities. And if they don't, perhaps they will at last have the decency to shut up.