Is Obama aiming too low?

11 days before his inauguration, and critics are rushing to accuse the president-elect of excessive caution. 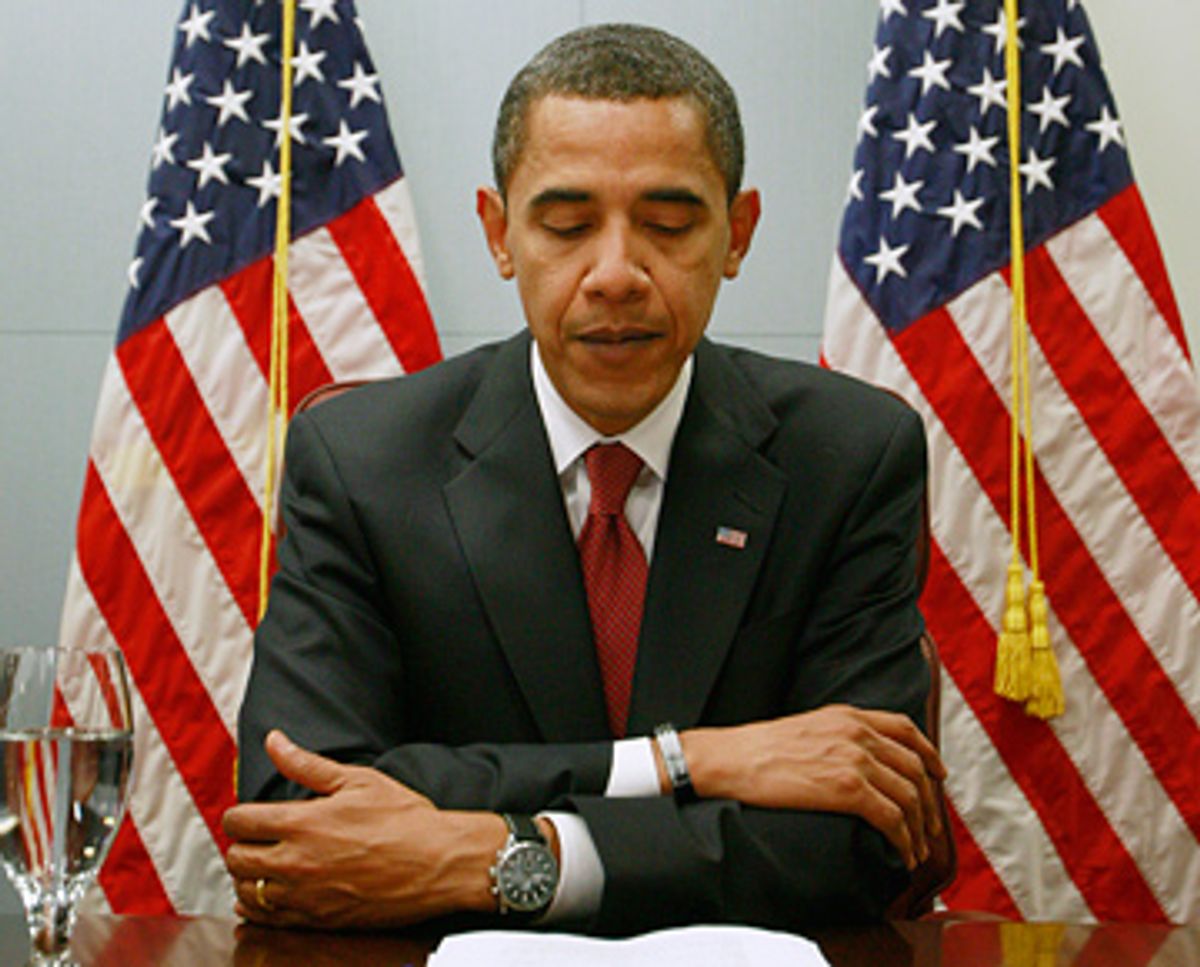 Is Obama moving too cautiously to address the nation's economic ills?

Barely 24 hours after the president-elect made a strong rhetorical case for dramatic government action to pull the United States out of the recession, critics, mostly from the left -- but including some Democratic senators -- are contending that his plan isn't big or ambitious enough to match the gravity of the crisis.

Elsewhere in the Times, Paul Krugman called Obama's American Recovery and Reinvestment Program "somewhat disappointing" and likely to fall "well short of what's needed." Krugman's analysis is based on crunching the numbers. A $775 billion spending program (40 percent of which might come in the form of tax cuts or tax breaks), he contends, simply won't make a dent in the $2 trillion worth of lost U.S. economic production predicted by the Congressional Budget Office over the next two years.

John Judis, writing in the New Republic, has even bigger concerns. Obama should be declaring the "fiscal equivalent of war" by engaging in a wholesale transformation of the U.S. economy equivalent to that wrought by World War II. At the same time, he should be fundamentally remaking the global economic order so as to address global trade and currency imbalances. Joe Stiglitz, while declaring support for Obama's overall approach, also calls for more attention to the problem of growing income inequality in the U.S. as well as for quicker action on global warming.

It all makes for an intimidating to-do list, and pretty much guarantees disappointment. A great many people have invested their hopes for profound transformation into the vessel of Barack Obama, but he is not going to stop global warming, end the energy crisis, remake the international economic order and redistribute wealth more fairly in his first couple of weeks in office. The mere act of incorporating all these myriad goals into one plan would almost by definition bog it down in a legislative morass and encourage resistance from Republicans and moderate Democrats.

That's not to say that the recovery plan can't inch its way toward some or even all those goals. Tax cuts for the working class, extension of unemployment benefits and help on healthcare will help on the inequality front, while directing funds to alternative energy and mass transit will help fight global warming and ameliorate the energy crisis. But moving too fast right out of the gate runs the risk of going nowhere at all.

It seems clear that the incoming administration is mindful of what happened the last time a new Democratic president came to Washington. Bill Clinton arrived during the tail end of a recession, and one of his immediate priorities was a big economic stimulus. After a year of squabbling with Congress, he ended up with just about nothing. Memories of that experience are no doubt seared into the consciousnesses of veterans of the Clinton White House such as Rahm Emanuel. Everything we know about Obama's predispositions suggests that he likes to move cautiously and carefully. By attempting to put together a package that can get wide legislative support, he is striving to ensure that his first step as president is in a forward-moving direction.

Of course, Obama is in a much different position in 2008 than Clinton was in 1992. The economic circumstances are far more dire, the Republicans are much weaker, and the public is clearly ready for dramatic change. We face a real crisis, and Obama does have a certain amount of latitude to define new political and economic realities. And Paul Krugman could well be right -- Obama's plan, as currently constituted, might not have enough heft to pull the U.S. economy out of its tailspin.

But what if expanding the scope of the recovery plan ending up derailing its chances for passage? Wouldn't that be the worst possible scenario? That $775 billion number wasn't picked out of a hat. I think it's what Obama and his advisors think they can get through the Senate without provoking a filibuster. Let's also not forget that the Obama administration also has another $350 billion to work with remaining from the authorization for TARP. If applied constructively, simultaneously with the stimulus plan, total spending is suddenly over $1 trillion, which, by any measure, is a big deal, if not a new one.

It's a good thing that the likes of Krugman and Stiglitz and Judis are pushing Obama to be more ambitious. Constant pressure should be applied. But expecting Obama to achieve all things at once, or accusing him, as Judis did, of "underestimating the problem he and the country faces" because he's not incorporating an utterly unrealistic transformational agenda in his first act of governance is unfair. Getting the country out of the mess it is in right now, and getting traction on some of the truly immense problems that the U.S. and the world face, will not be achieved this year, or even, as Obama has acknowledged, in "many years." With his eye to the long term, Obama apparently has decided not to engage in all-out political warfare in his first skirmish. We won't know if he's being too cautious, or laying the groundwork for a string of successes that build on each other, for quite some time to come. But I, for one, am not yet ready to be disappointed. I'll wait to Jan. 21 before I abandon ship.