The Treasury Department claims the Wall Street bailout is working. Not really, says the congressional panel investigating the bailout 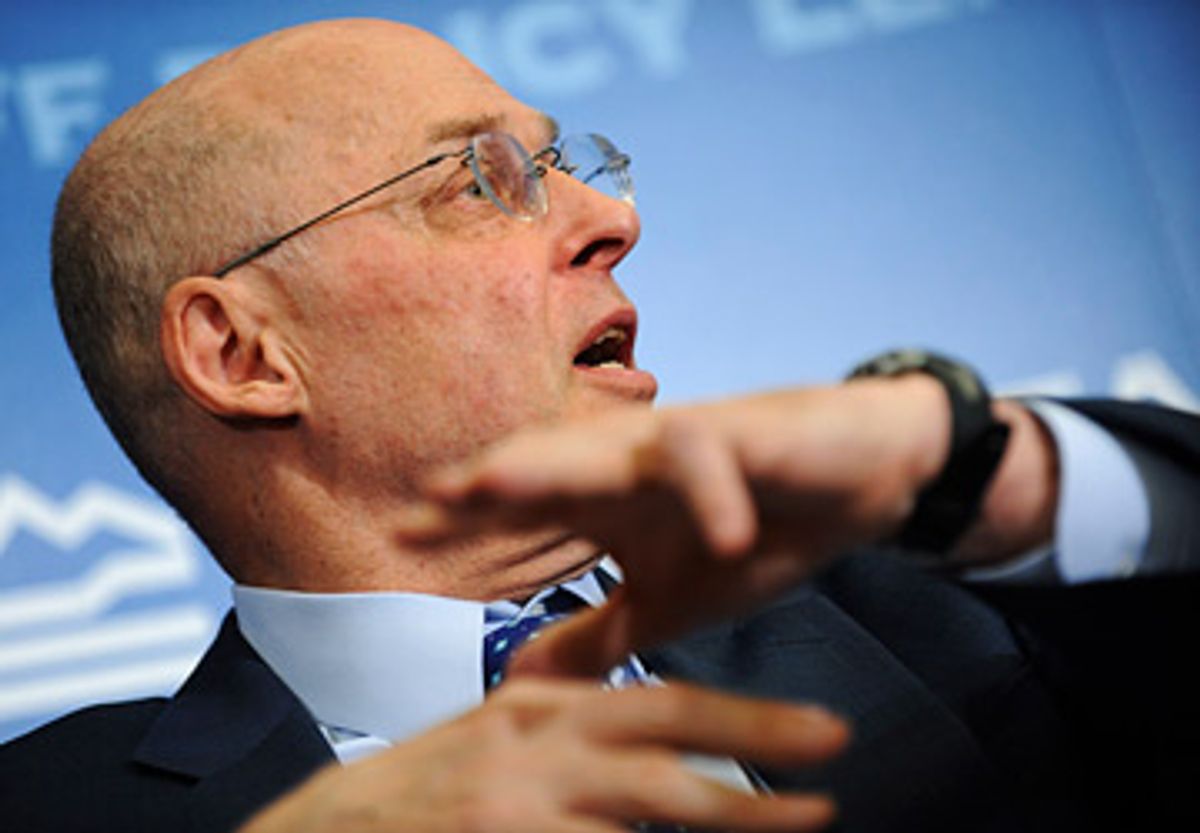 As far as Treasury Secretary Hank Paulson is concerned, the much-maligned $700 billion bailout of the financial industry -- known to acronym fans as TARP (Troubled Asset Relief Program) -- is a success. Never mind the continually worsening economic conditions that most Americans face. Never mind the myriad ways in which Paulson and company have abused the trust of the American public in their administration of the TARP. By the only metric that Paulson ever really cared about -- the behavior of credit markets -- TARP may be working.

Or so the Treasury told the Congressional Oversight Panel empowered to investigate how TARP has been implemented, when it answered one of the 10 questions posed by the panel on Dec. 10.

The question: "What specific metrics can Treasury cite to show the effects of the $350 billion allocated thus far on the financial markets, on credit availability, or, most importantly, on the economy?"

To which the answer, as presented in the panel's second report, released Jan. 9, was that something economists and bankers call the "the TED spread" had retreated significantly from the dangerously high levels it had reached at the epicenter of the crisis.

How the World Works explored the concept of TED spread back in September, in the post "Why the Threat of Systemic Meltdown Is Real." As I wrote then, "The TED spread is the difference between the interest rate on three-month U.S. Treasury bills and three-month 'LIBOR' -- the interest rate that commercial banks charge each other for lending money in Europe." It is basically a measurement indicating how nervous the big financial players are about credit risk. And in the fall of 2008, they were as nervous as they'd ever been -- to the point where people like Paulson and Bernanke became fearful that if dramatic action were not taken immediately, the economy would "stop." There would be no lending, period.

Say what you will about how Paulson et al. have managed this crisis, but there is evidence that the global economy has retreated from that precipice. As economist James Hamilton detailed in his blog Monday morning, despite last week's "awful" unemployment news, "signs of hope" can nonetheless be discerned in the economy.

[The TED spread's] spike up last fall was a very troubling indicator of perceived bank risk, flight to quality, and frictions in the interbank lending market. But the TED spread has declined significantly over the last 6 weeks.

Hamilton does offer a caveat:

The TED spread [has] often exhibited a pattern of temporary respite followed by a resurgence of perceived risk, and the same could certainly happen again. Nevertheless, I read the recent numbers as clearly encouraging.

(More than a week ago, Calculated Risk reported similar improvement in a wide array of credit market indicators.)

The Congressional Oversight Panel, led by bankruptcy expert Elizabeth Warren, declared itself unimpressed by the answer provided by Treasury.

The continued high levels of short term spreads compared to their very stable levels of the past suggest that the infusion of billions of dollars into the banks forestalled immediate collapse, as it necessarily would, but has not affected liquidity in credit markets or reassured the capital markets that large financial institutions are strong credits.

In other words, while major financial institutions may no longer be scared senseless at the prospect of imminent systemic collapse, they still aren't showing much willingness to start lending money again, and they're still considerably more freaked out than normal. When one combines those jitters with the numerous shortcomings that Warren's panel has identified in TARP implementation -- the lack of accountability and transparency, the absence of any coherent strategy, the unconditional nature of the billion-dollar handouts -- there's not much reason to be impressed with Paulson's performance.

But I don't think Paulson cares much what Elizabeth Warren thinks. His job tenure at Treasury ends in a week, at which point the task of keeping Wall Street and Main Street afloat becomes Tim Geithner's cross to bear. In the meantime, the prospect of a systemic collapse that would annihilate the global economy in short order appears to have been forestalled, for now, as indicated by the fluctuations of the infamous TED spread.

We'll never know what would have happened if Paulson and Bernanke hadn't convinced Congress to write a blank check to the Treasury Department. We can certainly assume that the process could have been better handled by all involved, and we sure hope that Obama and his advisors treat TARP's second $350 billion disbursement more responsibly than the Bush administration did the first. It's also quite possible that the damage is already done: That is, systemic collapse in the short term was averted, but the recession or depression that we are currently mired in could result in the same disastrous outcome, in slower motion.

But I think the key to understanding why the Treasury Department can't answer so many of the Congressional Oversight Panel's questions is that, last September, the Bush administration was in a state of sheer panic. Total economic catastrophe threatened, and the only thing it could think to do was to throw cash at banks until the ground stopped shaking. Now that a relative state of calm pervades the financial markets, we can look back and see an unholy mess. But Paulson probably looks back and thinks: It could have been worse.