Barack Obama's nominee to be Treasury secretary reportedly neglected to pay certain taxes and to check whether his housekeeper was legally able to work. 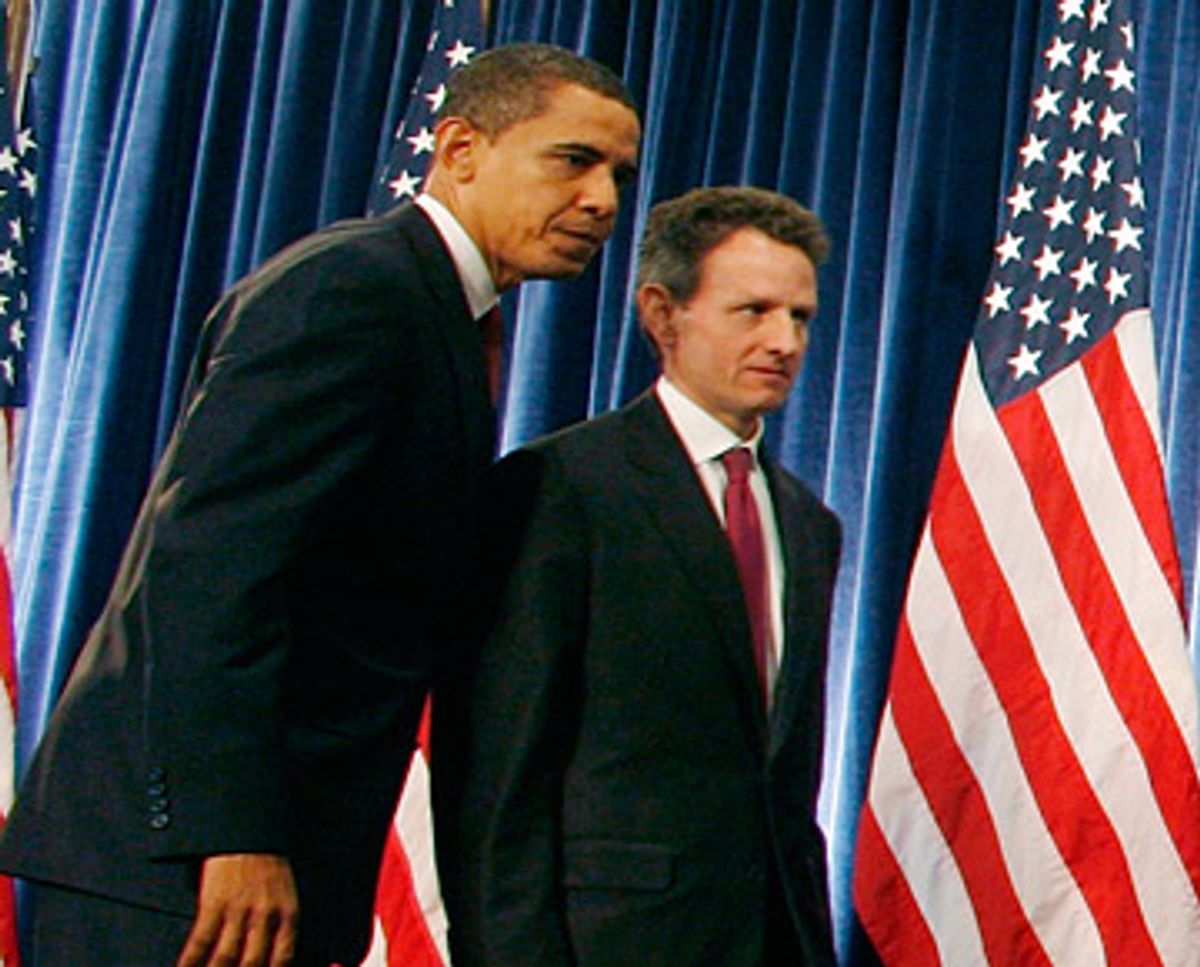 Given recent history, it seemed almost inevitable that one of President-elect Barack Obama's Cabinet nominees would be hit with a scandal related to taxes and/or the employment of an immigrant. The question was who it would be. Now we have an answer: Timothy Geithner, the man nominated to be the next Treasury secretary, is facing problems on both fronts.

On Tuesday, the Associated Press reports, Geithner met with senators to discuss two issues that could be an obstacle to his smooth confirmation. First, during his time at the International Monetary Fund, from 2001 to 2004, he was legally considered self-employed and was required to pay Social Security and Medicare taxes for himself, but failed to do so. The Wall Street Journal, sourcing to unnamed "people familiar with the matter," says this led to audits in his last two years with the IMF, and that "as soon as the IRS brought the issue to his attention, he paid the taxes with interest."

The second issue -- potentially the thornier one, if Republican senators want to make a show of being tough on immigration for their base -- is that Geithner's housekeeper's immigration papers expired while she was working for him. According to the WSJ, she didn't face charges and eventually obtained a green card.

So far, it looks like this won't prove fatal to Geithner's nomination. The Obama team is sticking with him, saying the infractions are a small matter compared to the economic crisis the next Treasury secretary will have to deal with. And Sen. Orrin Hatch (R-Utah), who sits on the committee that is considering confirmation, has already come out to say he still supports Geithner. Plus, this might not be the mortal wound it once was -- just last month, the Washington Post reported that illegal immigrants had been working for the cleaning service employed by Homeland Security Secretary Michael Chertoff, who oversees Immigration and Customs Enforcement.

The President-elect chose Tim Geithner to be his Treasury Secretary because he's the right person to help lead our economic recovery during these challenging times. He's dedicated his career to our country and served with honor, intelligence and distinction. That service should not be tarnished by honest mistakes, which, upon learning of them, he quickly addressed. He made a common mistake on his taxes, and was unaware that his part-time housekeeper's work authorization expired for the last three months of her employment. We hope that the Senate will confirm him with strong bipartisan support so that he can begin the important work of the country.

Update: One important point for clarification, via the New York Times. It appears that Geithner didn't pay the taxes in question during any of the time he was employed by the IMF, but the IRS only audited him during the last two years of his stint there, and he didn't alert the agency to the other years in which he hadn't paid. The Times reports that vetters with the Obama team discovered those unpaid taxes last fall, and brought them to his attention, at which point he handed over $25,970 -- which includes interest -- to the IRS.