In its third season, "Big Love" abandons its sugarcoated take on plural marriage for a far darker picture. 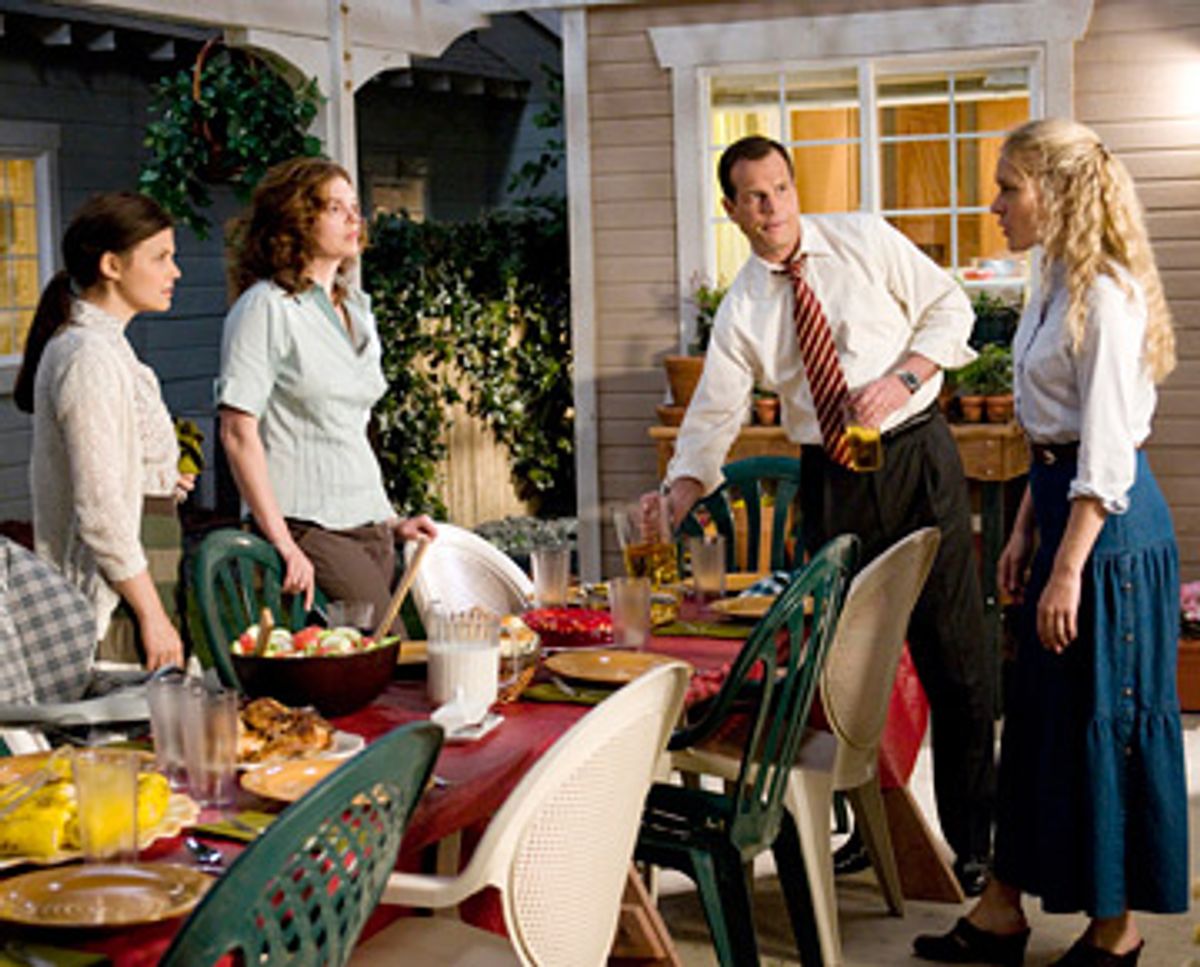 The woman you're dating loves your third wife, but she isn't crazy about your second. You're trying to pitch a casino to the representative of an Indian tribe, but he's suspicious of you and your religious beliefs. Your father-in-law is in jail and awaiting trial, and he's threatening to drag you and your family into it. One of your wives seems to be having trouble conceiving, but your beliefs and your happiness hinge on making your family as big as possible.

As tough as it is to understand, relate to or sympathize with Bill Henrickson (Bill Paxton), the Mormon polygamist at the center of HBO's "Big Love," through some delicate balance of wit, heart and high stakes, the show manages to transport viewers to an alternate universe where marriage is something shared not by two people, but by one man and three headstrong women. In other words, HBO's "Big Love" offers up subcultural rubbernecking at its very best.

Of course, without a delicate hand, "Big Love's" central conceit would seem like a gimmick. If the show limited itself to exposing the folds of this unusual and unnerving enclave without offering a compelling narrative, exploring the motivations behind the characters' choices, or giving viewers a chance to walk a mile in a polygamist's shoes, then there would be little reason to stick with it. Instead, "Big Love" drags us along -- kicking and screaming about sexism all the while -- into the center of the Henrickson family, its members demonstrating a confusing mix of neediness, loyalty, religious delusion, stubbornness and earnest collaboration.

The show wasn't always so good at what it does. During its second season, its kinder, gentler vision of polygamy gave way to an uglier reality when Bill Henrickson unexpectedly started courting a fourth wife without letting his other wives know. Instead of highlighting Bill's strange, faith-based compulsion to expand his family at all costs, the show's writers presented Bill's desire for a new woman without any explanation, making him look like a much more common animal: an insatiable lech. And what did Ana (Branka Katic), a smart, pretty Russian waitress, see in this beleaguered, middle-aged guy with a gaggle of wives and an unruly herd of screaming children? Just as we were starting to get on board with the Henrickson clan, Bill's sudden swerve into perv territory strained credulity, and tested our patience as viewers.

"Big Love" not only recovers from this near disaster in its third season, but its episodes build to a dramatic climax heretofore unseen on this series. Suddenly, not only are these characters being tested beyond the day-to-day squabbles of the first two seasons, but viewers get a richer and more nuanced understanding of what ties the Henrickson family to this fragile and often overwhelming arrangement. It's as if the show's writers recognized their miscalculations and raised the bar for themselves, in so doing pushing the show onto fresh ground.

Instead of trying to sell us a soft-focused picture of polygamy, "Big Love" is suddenly leaning into its inherent ugliness. Confined to a jail cell for transporting minors over state lines, deposed patriarch Roman Grant (Harry Dean Stanton) no longer rules over his flock of wives and children like a hungry wolf, and is instead anxiously awaiting his trial, throwing as much weight around as he can from the confines of prison. He's intent on discovering the identities of the girls who plan to testify against him, and he's aided by his busybody wife Adaleen (Mary Kay Place) in this pursuit. As the town grows hostile toward polygamy in anticipation of Roman's trial, Bill tries desperately to keep his own family out of the whole mess.

Life on the compound, meanwhile, is even creepier and more claustrophobic than usual, with Roman's son Alby (Matt Ross) taking over and declaring himself the new prophet. Bill's mother, Lois (Grace Zabriskie), seems to be slipping over the edge into near madness, while Bill's brother Joey (Shawn Doyle) takes a new wife, leaving his unstable first wife, Wanda (Melora Walters), more emotionally volatile than usual. The compound has never been painted in such stark colors, and with the trial about to start, everything seems destined to spiral downward from here. The empty threats and sense of foreboding of the first two seasons are suddenly translating into real, nail-biting action, and the results are riveting.

But the story is also finding its stride emotionally. The series' writers have moved beyond simply emphasizing the strange blend of competition and camaraderie found among Bill's wives to a deeper look at why the three of them entered into such a sticky alliance in the first place. When Margene (Ginnifer Goodwin) doesn't shed a tear over a close family member's death, then beams at the love and loyalty of her extended family, or when Barb (Jeanne Tripplehorn) argues with her conniving sister and her passive-aggressive mom, then returns to her own "sister wives" with an open heart, it becomes clear that these women have a strong hunger for the support and love of other women, and that plays a huge part in their satisfaction with a life that would seem untenable to the average outsider.

But then, "Big Love" has an uncanny way of transforming outsiders into insiders. As much as we might find this family's choices befuddling, the characters win our support and loyalty, mostly by demonstrating their own stubborn, unlikely loyalty toward each other, even in the most trying and unbearable circumstances. By presenting this bizarre world with so much empathy and intensity, "Big Love" makes us question our assumptions about love, marriage, parenting, religion and everything else under the sun. Beneath the dorky clothes and the bad hair, the Henrickson family is lovely and awful and funny and undeniably doomed. No wonder it's so hard to look away from the wreckage.