Is the Army lying about friendly fire deaths?

The military claims fratricides in Iraq and Afghanistan are down 90 percent from previous wars -- but experts call the figures suspect. 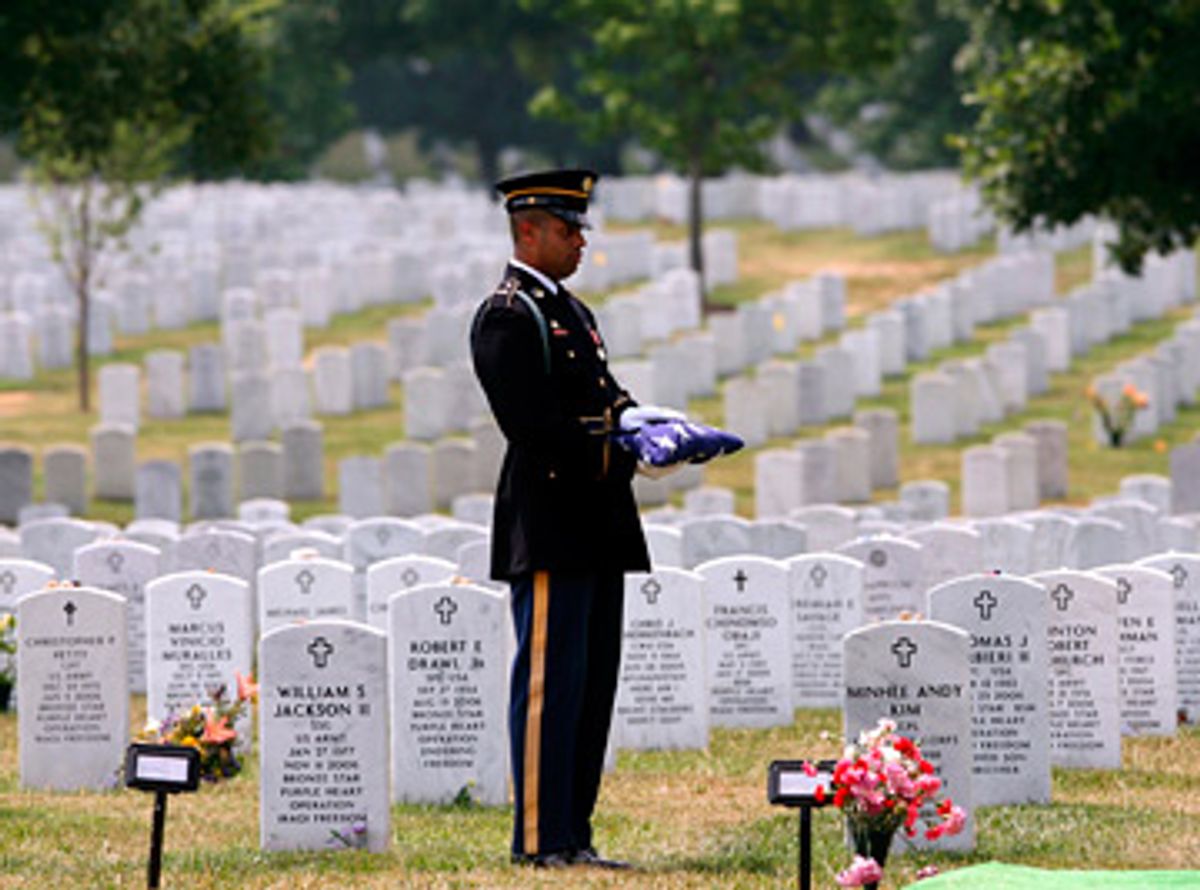 New statistics obtained by Salon depict a spectacularly low number of U.S. Army deaths from friendly fire in the current conflict in Iraq, a mere fraction of historical rates. According to data released to Salon by the Army's Combat Readiness/Safety Center, only 24 of the 3,059 U.S. Army soldiers killed in Iraq since the invasion in 2003 died by fratricide.

That is a rate of .78 percent, less than one-tenth of almost every estimate from previous conflicts stretching back to World War II, despite six years of combat in Iraq, often in confusing urban terrain, using intense U.S. firepower. Army officials gave Salon similar statistics for Afghanistan: six out of 484 dead, or a rate of 1.24 percent. By comparison, the Army's own estimates of the friendly fire rates for every war from World War II to Desert Storm are between 10 and 14 percent, except for a low of 6 percent during the invasion of Panama. During the last U.S. conflict in Iraq, 1991's Operation Desert Storm, fratricide killed 35 of 298 U.S. service members, or a rate of nearly 12 percent, according to a 1992 report by the Center for Army Lessons Learned.

Army spokesman Paul Boyce said improved technology and better leadership and training contributed to the low fratricide rates in the current Iraq war. Some observers, however, called the new data fishy. "That is almost impossible," said Geoffrey Wawro, director of the University of North Texas' Military History Center, who closely followed the Army's coverup of football star Pat Tillman's death by friendly fire in April 2004. Wawro says that technology and training can help minimize the friendly fire rate, but "still, the fog of war is such that it has to be higher than .7 percent."

"To say we have suddenly stopped all these problems that have been a part of warfare since the beginning of time? I don't believe it ... To claim that this Army is somehow uniquely disciplined in that regard? It is a great army, but they are still human beings. They are still scared shitless."

Those unusually small numbers, along with anecdotal reports from soldiers and a string of coverup allegations, raise the possibility that the Army has routinely swept fratricide incidents under the rug in Iraq and Afghanistan. Salon detailed just such a case last fall, in which battle video and testimony from soldiers contradicted the official version of events. Army casualty officers, therefore, might have provided incorrect information to an unknown number of parents about the death of their son or daughter in Iraq or Afghanistan. The Army might also have missed a similar number of opportunities to learn from friendly fire incidents and avoid knocking on more parents' doors with the same bad news.

As Bacevich notes, many of the problems that create friendly fire incidents have existed "since the beginning of time." In an e-mail to Salon, the Army's Paul Boyce listed the "leading causes of fratricide throughout military history": "chaos and confusion of warfare; inadequate situational awareness; inadequate employment of, and adherence to, fire control measures; and combat identification failures."

Expressed another way, the fog of war and human error cause soldiers to misidentify friends as foes. A more easily quantifiable factor that Boyce does not cite is the collision between different branches of the military or between different units in the same branch. A 1992 Army study says that fratricide is most likely to occur "along shared unit boundaries," or when different units fight side by side supporting each other. This can mean, as in Grenada in 1983, a Navy jet mistakenly attacking Army troops, or as in the incident first reported last fall in Salon, members of an Army tank unit in Iraq in 2006 allegedly firing on Army infantry.

Those numbers are consistent despite leaps in technology. Though Boyce says that "warfighter training and leadership are the principal determinants," he says that "technology also contributes to the avoidance of fratricide" in the current conflict. "Fire-control systems sights and computers are far more capable than in the past. Weapons and ammunition are able to achieve high probabilities of hits and kills at greater ranges." Technological improvements since the first Gulf War have greatly improved the Army's ability to track friendly forces on the battlefield.

Yet Wawro notes that technology can also increase the lethality of friendly fire incidents. The extremely powerful weaponry the United States now brings to the battlefield means that "one tiny mistake results in heavy casualties."

The Army's official stats for the current Iraq war suggest that fewer soldiers were killed by fratricide over the past six years than the total number of service members killed by fratricide during Operation Desert Storm, which lasted 42 days. The statistics from Desert Storm come from well-documented events, though it isn't hard to find Gulf War veterans who claim even those numbers are low.

Why should numbers from the current Iraq conflict be so different from numbers from the last one? Army officials say that Iraq and Desert Storm don't provide an apples-to-apples comparison. Desert Storm was a brief, extremely violent conflict fought in the open desert and marked by some costly fratricide mistakes. On Feb. 27, 1991, for example, one group of American tanks opened fire on another already firing at an Iraqi unit, killing six U.S. soldiers and wounding 25.

Or there is the possibility that something has changed about the way the military reports such incidents. Studies done by both Congress and the military suggest that officers have an incentive to cover up fratricide, which is particularly corrosive to morale.

According to a study prepared by the Office of Technology Assessment for the House Armed Services Committee in June 1993, after the first Gulf War, a "15 to 20 percent fratricide rate may be the norm, not the exception," as "past rates of fratricide have been systematically and substantially underestimated." It notes that the "psychological effects of friendly fire are always greater than from similar, enemy fire."

A decade earlier, a 1982 report by Army Lt. Col. Charles Shrader called "Amicide: The Problem of Friendly Fire in Modern Warfare," which put the friendly fire rate far lower — perhaps as 2 percent — had reached the same conclusion about the temptation to hide friendly fire incidents. "Commanders at various levels," wrote Shrader, "may be reluctant to report instances of casualties due to friendly fire either because they are afraid of damaging unit or personal reputations, because they have a misplaced concern for the morale of surviving troops or the benefits and honors due the dead and wounded, or simply because of a desire to avoid unprofitable conflicts with the personnel of supporting or adjacent units."

The 1992 report from the Center for Army Lessons Learned, cited earlier, says that friendly fire can be "devastating and spread deeply within a unit." Friendly fire, it says, also results in "loss of confidence in the unit's leadership."

"Nobody wants to talk about this," says Wawro. "It is a disincentive to recruitment and everything. There is real incentive to cover it up."

These latest fratricide statistics from the Army already include incidents initially blamed on the enemy. There was Pat Tillman. Another example was Lt. Kenneth Ballard. The Army told his family he died in Najaf from enemy fire in May 2004. By December of that year, the family was asking for more information. The Army admitted to friendly fire as the culprit in September 2005.

On Oct. 14 of last year, Salon began a series of stories about the deaths of two infantry soldiers, Pfc. Albert Nelson and Pfc. Roger Suarez-Gonzalez on the rooftop of a building in Ramadi, Iraq on Dec. 4, 2006. Soldiers there said a nearby U.S. tank fired at the building, blowing Suarez off the roof and killing him instantly. Nelson died later that day.

Salon also released footage from a helmet-mounted camera from that day. The video shows an explosion at that building, soldiers claiming they watched the tank shoot at them and a sergeant attempting to report what he though was a friendly fire incident over a radio. A superior officer then apparently overrules the sergeant. The Army says two enemy mortars landed simultaneously on Nelson and Suarez.

During several visits to Nelson and Suarez's old unit at Fort Carson late last year and in interviews since then, scores of veterans from Iraq have described non-lethal friendly fire incidents as surprisingly routine. In the same neighborhood, tanks blast clean through house walls, the air wobbles with hits from massive 2,000-pound bombs dropped from U.S. aircraft, and infantry shoot from dusty house to dusty house. It gets confusing.

Some soldiers present during the battle on Dec. 4, 2006 say Nelson and Suarez's death wasn't the only exchange of friendly fire that day. It was only exceptional because of the firepower involved and the resulting deaths.

Several expressed anger – but also, some understanding – at the tank that allegedly fired on Nelson and Suarez. The resentment toward the chain of command for the alleged cover-up was unmitigated. "A bunch of guys with fucking rags on their heads weren't good enough to kill those guys," one soldier in the building with Nelson and Suarez said about the two men. "I lost more respect for (my platoon sergeant) because we knew he knew."

The Army has so far declined to open a new investigation, offering only to review any "new specific evidence" about the incident, according to Army spokesman Paul Boyce.

The Army did conduct an initial investigation into the deaths. Army officials say it included 170 photographs, dozens of interviews and hundreds of pages of ballistic analysis. Since July, Salon has repeatedly requested this material through the Freedom of Information Act, to no avail. So far, the Army has only released a heavily redacted, 10-page summary of that investigation.

The tragedy of burying friendly fire incidents is that the opportunity to study and prevent future, similar incidents dies along with the truth. The Center for Army Lessons Learned, in fact, studies fratricide events and develops techniques to avoid similar tragedies in the future. "If you make a mistake, you have to learn from it," explained Ralph Nichols, a senior military analyst at the center who helped craft new Army guidance last September on avoiding fratricide. "If you know what causes it, you can plan and train to avoid it."

In early 2007, Pvt. Matthew Zeimer, 18 and Spc. Alan McPeek, 20 took cover on a rooftop in Ramadi during a firefight with insurgents. It was Feb. 2, two months after Nelson and Suarez's death in the same town. During the battle in February, a tank mistakenly fired on Zimmer and McPeek's position. McPeek died instantly. Zeimer was blown to the other side of the roof. He died a short time later. The families of the two men were originally told their sons were killed by enemy fire.

The Army says Nelson and Suarez did not die from friendly tank fire. If the Army is wrong, there is no way of knowing if admitting it would have saved the next two young men just two months later.