Daniel Craig is the secret weapon in this otherwise methodical Holocaust movie about Jewish brothers determined to kick Nazi ass. 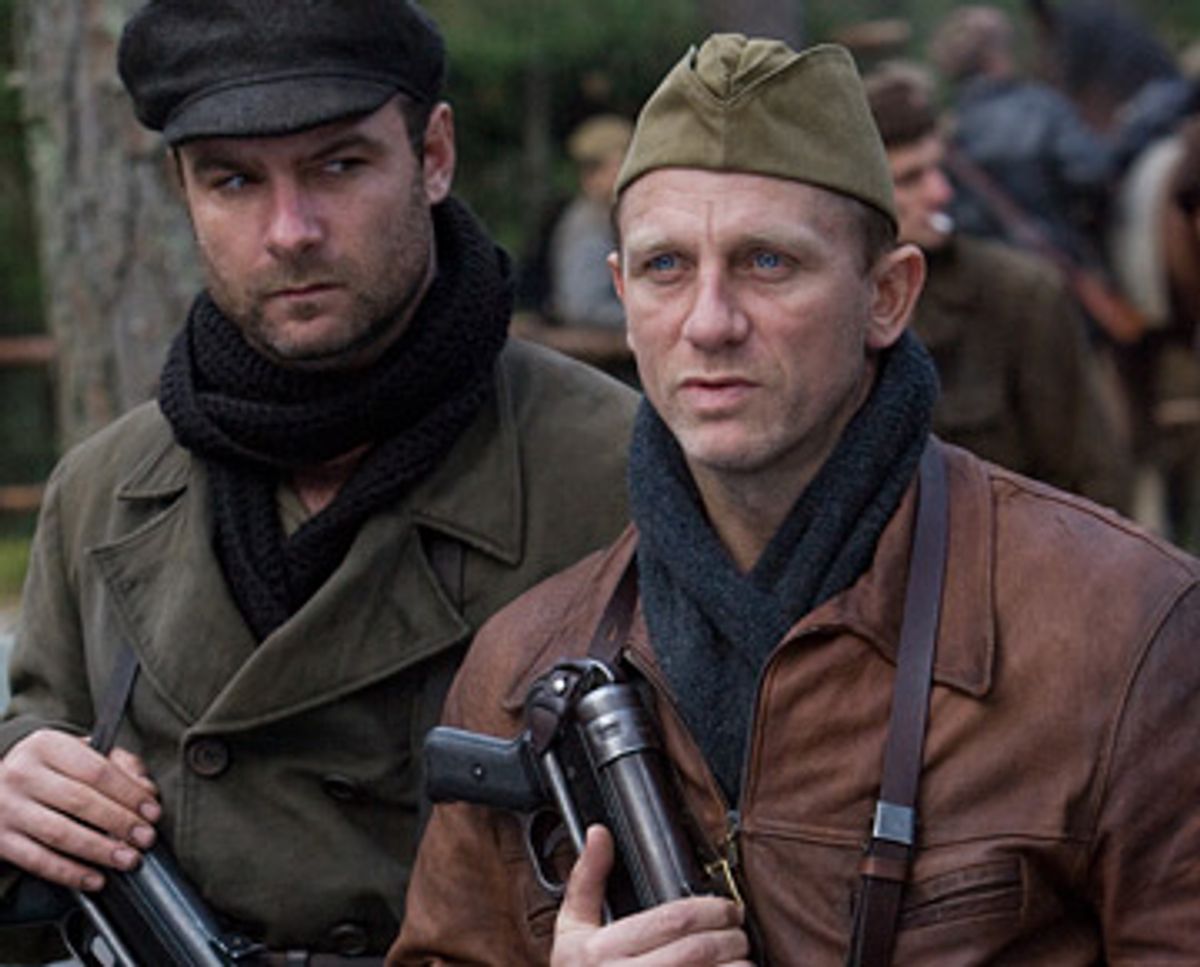 History is full of terrible events and injustices that human beings, through resiliency and courage, are somehow able to survive. Then it's left to filmmakers to move in and make boring art out of the facts. "Defiance," directed by Edward Zwick (whose last movie was the bloodless "Blood Diamond"), is based on a true story whose very outline is extraordinarily compelling: In 1941, in Nazi-occupied Belarus, four Jewish brothers -- Tuvia, Zus, Asael and Aron Bielski -- survived a massacre in their village and went into hiding in the forest. In the ensuing days and weeks, they were joined by other refugees, many of them weak and infirm. But most of the group, under the leadership of the oldest Bielski brother, Tuvia, managed against all odds to survive. They fought Nazis and collaborators whenever necessary, and joined forces with the Russian Army, but survival was their most powerful means of fighting back. Although the group remained in hiding for some four years, and often found themselves on the move in the forest, they worked to maintain a sort of civilization for themselves, building shelter and working out the essential details of communal life. In other words, they kept themselves alive by hanging onto precious threads of everyday living.

How can you mess up a story like that? Zwick, with his methodical, earnest filmmaking, does seem to have hit all the essential nubs of the story. (The source material is Nechama Tec's 1993 book "Defiance: The Bielski Partisans," adapted by Zwick and Clayton Frohman.) The picture features some beautifully modulated performances. And the cinematography, by Eduardo Serra, is gorgeous and vital: The picture was filmed in forests in Canada and Lithuania, and Serra uses all that greenery to give "Defiance" a look that's lush and vivid.

But "Defiance" comes off as plodding and workmanlike -- and even in the midst of Zwick's too-careful machinations, it's a movie that's unsure of what it wants to be. "Defiance" is sometimes an action movie, but it also pitches the behavior of the angrier, more aggressive brother, Zus (played by Liev Schreiber), against the more reasoned, philosophical views of Tuvia (Daniel Craig). Tuvia is willing to kill Nazis and their scheming little helpers, but only when absolutely necessary; Zus is eager to get in there and kick Nazi ass. Zus spends a great deal of time glowering at his older brother, criticizing him for allowing more and more people to join their group -- to him, that only means more mouths to feed.

The movie needs that tension between Tuvia and Zus, but it sometimes feels false, given that Zwick dramatizes Zus' more aggressive stance with so much relish: He's always ready, guns blazing, for warfare. This is one of those movies that repeatedly offers us the catharsis of revenge -- who doesn't want to see Jews kicking the butts of Nazis? -- only to double back and waggle its finger at us, reminding us that violence is not the best way.

And despite the fact that Zwick supplies us with plenty of action -- including a scene in which underequipped Jewish peasants go up against a Nazi tank -- "Defiance" is still interminable. Zwick has conviction, all right, but he doesn't know how to translate it into energy. The movie's dialogue is lethargic and unnecessarily self-important, although many of the performers here manage to survive it: Jamie Bell, as one of the younger Bielski brothers, Asael, suggests the ways in which boyish innocence can become a part of manhood, instead of something that needs to be wholly shed. And the Danish actress Iben Hjejle, as Bella, the woman who becomes Zus' partner, gives a performance that blends delicacy and hardiness in just the right proportions.

Schreiber is generally a wonderful actor, but "Defiance" doesn't bring out the best in him -- perhaps because he's simply too theatrical a presence, playing against the astoundingly understated Craig. If there's one good reason to see "Defiance" -- flawed as it is -- it's Craig. Craig is the kind of actor who lets his eyes register the information around him; he's a listener and a reflector, telling us most of what we need to know about his character without even opening his mouth. In one early sequence (small spoiler ahead), he uses a gun he's just acquired to kill the men responsible for the death of the brothers' father as they sit around a kitchen table. The only survivor is a woman, who has just seen her family murdered. She begs Tuvia to kill her as well; he refuses, not with words, but with a look. It's the movie's coldest moment, and Craig is clearly aware that his character is serving up the cruelest punishment possible. His eyes are pitiless, but I think I detected a flash of anguish there, too, a denial of his better nature that tortures him.

Zwick spends some time pondering the moral issues connected with the use of violence, even against your oppressors (territory that Steven Spielberg similarly explored in "Munich," in which Craig also appeared). Those are the parts of "Defiance" that seem most alive to me. At one point a rabbi leads the group -- exhausted and hungry -- in prayer, imploring God to "choose another people." It's a lovely and piercing moment, and perhaps, coming from a religious person, it represents the ultimate defiance: the act of standing up to the creator and saying, "Enough, already!" It's satisfying, on some level, to see Nazis blasted to smithereens. But in "Defiance," the bolder action may be an act of prayer.