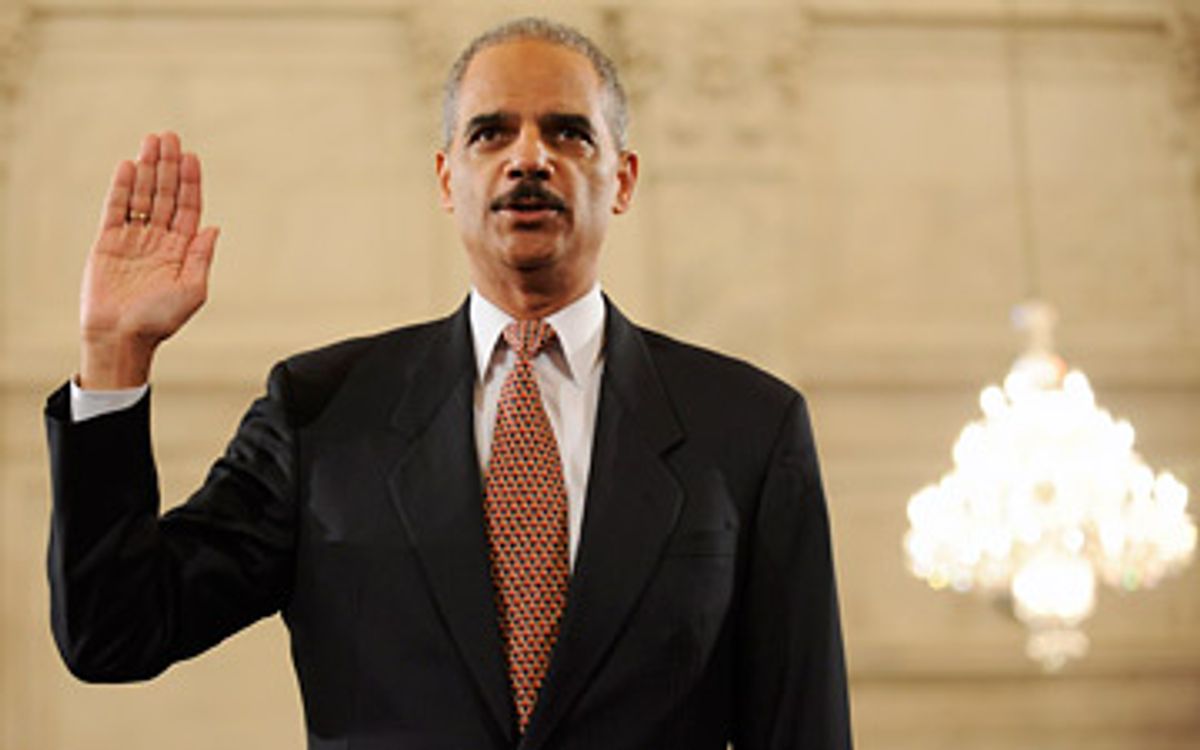 From beginning to end, the Senate Judiciary Committee hearing on Eric Holder's nomination as attorney general observed the ban on candid discussion of the main objection to confirming him. The forbidden topic: the real reason behind the pardon of Marc Rich eight years ago, a controversial action that Holder reviewed as deputy attorney general -- and that he failed to oppose for reasons he did not mention.

In an editorial that appeared on the morning of the hearings, the Washington Post urged the Senate to question Holder "closely" on the Rich matter. But it is difficult for senators (and editorial writers) to ask pertinent questions when they are completely ignorant of the real background and motivations of the players in the case. Even now, the true machinations behind the Rich pardon cannot be discussed honestly -- perhaps because they implicate the government and the security services of the state of Israel.

Sitting quiet and grave before the committee, Holder listened as Sen. Arlen Specter, R-Pa., one of the leading windbags of our time, held forth on how dreadful Rich is and how awful the pardon was. The fugitive trader, who still lives in Switzerland, had "a reprehensible record," Specter said -- alluding to reports that Rich did business in Iraq and Iran. The Pennsylvania Republican demanded to know how Holder could possibly have recommended a pardon for such an odious figure.

No doubt Holder was advised by the president-elect's transition team not to argue with Specter or anyone else about Rich. He must have been told not to talk about the foreign-policy issues that heavily influenced his view of the Rich decision. So he offered a meek mea culpa, took his lumps from Specter, and promised that his mistakes had made him a better man. Considering that his objective is to get through the hearings without undue stress, that was probably the wisest course. Telling the truth would only have inflamed the Republicans and the press, while creating unwanted drama for Obama.

Still, it would have been a refreshing change from the usual confirmation minuet if instead of humbly apologizing, Holder had tartly instructed the buffoonish Specter, his fellow senators, the press, and the public about the actual circumstances of the Rich affair. He might have started with the fact that continuous lobbying on Rich's behalf from the highest Israeli leaders and their American friends -- among whom Specter no doubt counts himself -- became even more intense in the days before Clinton left office. He could have noted that such pressures coincided with Clinton's efforts to conclude a peace agreement between the Israelis and Palestinians. And he could have explained to Specter that Rich's deals in Iran and Iraq were often related to his other role -- as an asset of the Mossad who gathered intelligence and helped to rescue endangered Jews from those regimes.

It is clear that Holder and his colleagues in the Justice Department had ample reason for concern over the proposed pardon, in part because pardoning a fugitive violated precedent. But for the Post to call him "the pardoner" in a front-page headline directing readers to the editorial was grossly unfair. Clinton had sole constitutional discretion to grant the pardon, and he would have done so whether Holder liked it or not.

But Holder understood that there were deeper reasons why the pardon was likely to be approved, which had nothing to do with the political and charitable contributions of Rich's ex-wife, the Manhattan socialite Denise Rich. The New York Times offered just a hint in a front-page story that appeared shortly after the Holder nomination was announced. Only at the very end did the Times mention the pressure from "the Israelis" that had persuaded Holder not to oppose the pardon -- as he told Beth Nolan, then the White House counsel.

Placed in its international context, that remark puts an entirely different coloration on Clinton's decision and on Holder's forbearance.

As the president mulled Rich's application, he was preoccupied with his final and most ambitious efforts to revive the Mideast peace talks that had imploded at Camp David during the summer of 2000. He was talking virtually every day with Ehud Barak, then Israel's prime minister, trying to persuade the Jewish state's leader to approve concessions to the Palestinians. That was only weeks before national elections were to take place in Israel, with Barak trailing in polls and heading toward defeat.

Echoing Barak's pleas on behalf of Rich were Clinton's old friend Shimon Peres, former Mossad director general Shabtai Shavit, and a host of other important figures in Israel and the American Jewish community. Winning the pardon was a top priority for Israeli officials because Rich had long been a financial and intelligence asset of the Jewish state, carrying out missions in many hostile countries where he did business. Although commentators in the mainstream and right-wing media have discounted this aspect of the controversy, they often seem as unfamiliar with critical facts as the average senator.

Following weeks of preparation by Clinton, the last round of serious peace talks opened in Taba, Egypt, on Jan. 21, 2001, the day after he signed the Rich pardon. Those negotiations eventually failed, yet they came closer to achieving a workable settlement than any before or since.

Meanwhile the fugitive financier, as he is still known, has never returned from his lair in Zug, Switzerland, to the United States. (The mainstream press never mentions that, either.) In other words, he has never used the pardon -- perhaps because he would first have to pay up tens of millions of dollars he owes in back taxes, a condition set by Clinton.

Clinton's decision is subject to harsh criticism in both substance and appearance, even by smart people who know the truth. But the pardon power exists so that presidents will be free to make such hard choices for reasons of state. As a lame duck, Clinton had no other means to induce his Israeli partner to take any risk for peace. All of this has been ignored ever since by the likes of Arlen Specter and the Washington Post -- and was obscured once more because Holder didn't want to start an argument with the Washington establishment, which forgets nothing and, even more reliably, learns nothing.