Obama sells out to Wall Street

The president-elect's support of the bank bailout is payback to his wealthy Wall Street supporters. 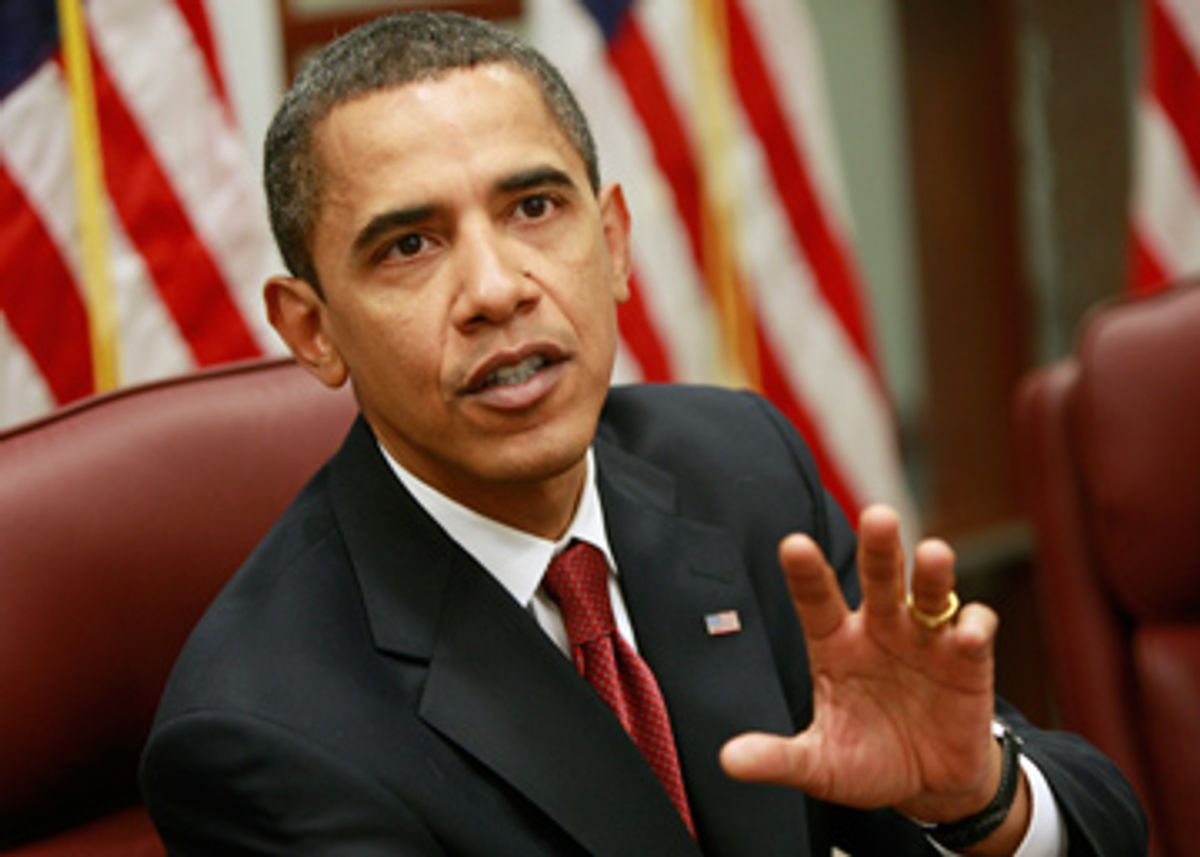 The veto is the legislative equivalent of a nuclear warhead -- a rarely used instrument of devastating force that singularly vaporizes the votes of 535 elected representatives. So when a president-elect issues a veto threat before being sworn into office, it sets off a particularly big explosion because it is a deliberate agenda-setting edict about priorities for the next four years.

That's why every American who isn't a financial industry executive should be nervous.

After President Bush this week asked Congress to release the bank bailout fund's remaining $350 billion, Obama pledged to veto any bill rejecting the request, meaning he is beginning his presidency not by "turn[ing] the page on policies that have put the greed and irresponsibility of Wall Street before the hard work and sacrifice of folks on Main Street," as he once pledged. Instead, he is promising a mushroom cloud unless lawmakers let taxpayer cash continue flowing to the biggest of Big Money interests.

Amid paeans to "new politics," we're watching old-school paybacks from a politician who raised more Wall Street dough than any other -- a president-to-be whose inauguration festivities are being underwritten by the very bankers who are benefiting from the bailout largesse. Safely distanced from electoral pressure, Obama has appointed conservative economists to top White House positions; floated a tax cut for banks; and is now trying to preserve corporate welfare that almost exclusively benefits the political donor class.

This isn't much-ballyhooed "change" -- it's money politics by a different name. How do we know? Because neither Obama nor anyone else is genuinely trying to justify the bailout on its merits -- and understandably so. Even the most basic queries prove such merits don't exist.

Has the bailout increased bank lending, as was its stated objective? "Hundreds of billions of dollars have been injected into the marketplace with no demonstrable effects on lending," says a new report by the congressional panel charged with overseeing the money.

Do federal officials have a solid plan to improve the bailout? The report raises alarms about "the shifting explanations of its purposes," noting that the government has "not yet explained its strategy."

Is the cash being spent responsibly? The report says a lack of transparency means the public "still does not know what the banks are doing with taxpayer money."

But the most damning question isn't even being voiced: Is a bank bailout the best way to boost the economy?

Somehow, immediately releasing more bailout funds is being portrayed as a self-evident necessity, even though the New York Times reported this week that "the Treasury says there is no urgent need" for additional money. Somehow, forcing average $40,000-aires to keep giving their tax dollars to Manhattan millionaires is depicted as the only "serious" course of action. Somehow, few ask whether that money could better help the economy by being spent on healthcare or public infrastructure. Somehow, the burden of proof is on bailout opponents who make these points, not on those who want to cut another blank check.

This bizarre dynamic is anything but the "pragmatism" Obama rhetorically fetishizes -- and America's anti-bailout majority knows it.

Sure, Obama might believe he's deft enough to seem courageously populist while using his White House to perpetuate kleptocracy. Perhaps he thinks the gravity of a veto threat will, for a second time, trick the nation into reluctantly accepting theft.

Or maybe before attempting more sleight of hand, Obama should take a moment away from studying Lincoln's speeches and Roosevelt's fireside chats and recall the irrefutable sagacity in one of the most (in)famous Bushisms of all.

"There's an old saying in Tennessee," the outgoing president said early in his first term. "Fool me once, shame on you. Fool me (twice) -- you can't get fooled again."