What on Earth? SciFi's "Battlestar Galactica" speeds into its home stretch with one melodramatic revelation after another. 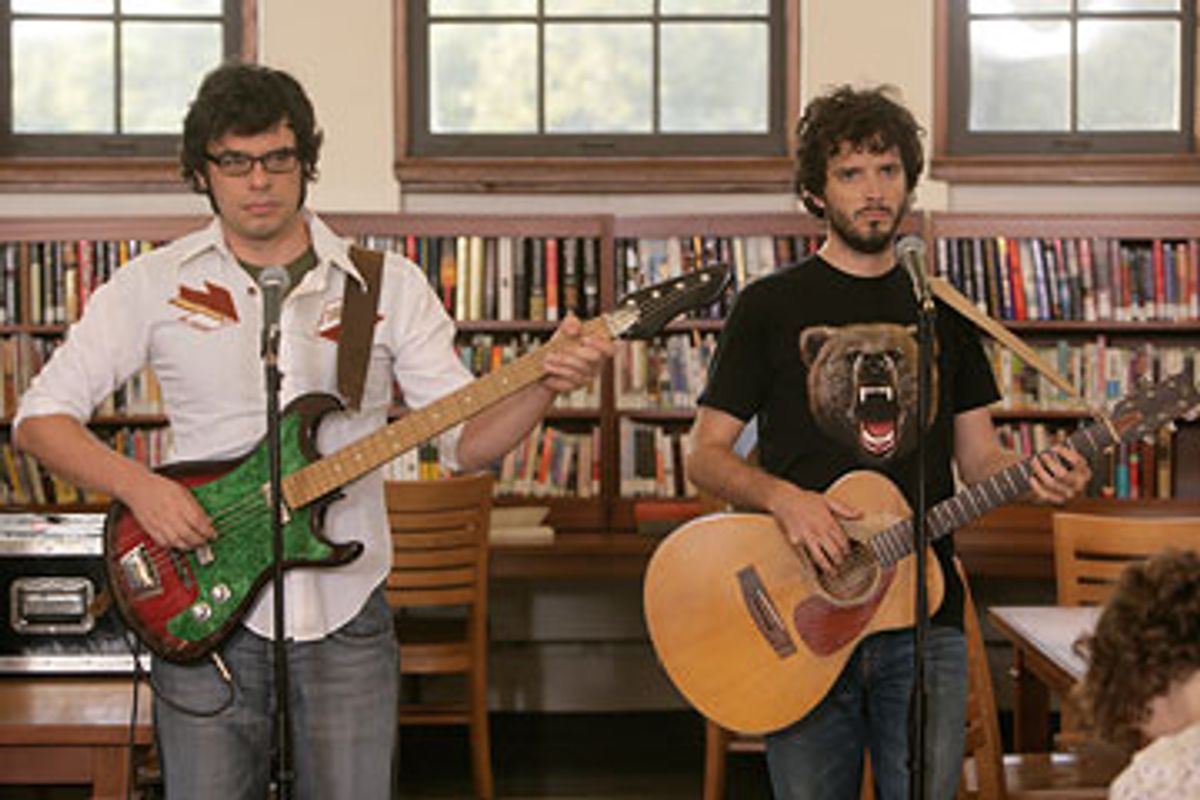 I hate hearing, "I liked their early stuff the best." Even if it's true, there's something about that sentiment that's just so overused and predictable. "Of course you liked early R.E.M. best," I want to say. "You were 17 years old and drunk on tequila and in love with a girl who didn't know you existed, and 'Harbor Coat' summed up your melancholy mood like it was written just for you."

The truth is, we all loved early U2 and early Genesis and early "SNL" and early "Sopranos" and early reality TV and the first season of "Lost" and early Modest Mouse and some of the first webzines and the first days of Burning Man (before it got so popular) and John McEnroe (before he was everywhere) and the Dead (before the frat boys caught on) and weed (when it was cheap, remember the dime bag?) and early David Foster Wallace and early Dan Clowes and early "This American Life" and early Spy magazine and early, early, early, early to the party, not late! Not like everyone else, the herds, the masses! I knew about it all first, I was there, goddamn it, I was right there, discovering it. Just me, me, me!

But you weren't alone, sugar plum. We were all there. We all liked the same crap, and then we didn't like the stuff that came after that. And then we got fat and our hair started falling out and our backs started to hurt and we didn't like anything at all anymore.

OK, fine, I never liked the Dead, not really. And these days, I do enjoy some things, like really good mattresses, and extremely comfortable shoes, and pie. But you know what I'm not sure I love anymore? "Battlestar Galactica."

Sweet gods on high, I know! Pure blasphemy! What can I do, though? It's like when you're 7 years old and you go to see "Star Wars" in the theater, and there's an evil guy and a princess (a princess!) and robots and planets with three suns. Suddenly, the whole world feels like it belongs to you! And then you wait three years for the Empire to strike back, and when it does? You're 10 years old and you're in love with Han Solo and you're transformed into an "Empire"-loving zombie overnight, you go back to see that movie again and again and again and you save your money to buy action figures and Landspeeders and Millennium Falcons and AT-AT Walkers and you're just so happy to be a fan.

And "Return of the Jedi" is pretty good, or at least OK, but then you get much older, and the prequels come out. They're just horrid, horrendous, hideous, unthinkable, leaden, stupid, bloodless, laughable, frightening, downright bad, even when you're really high and you're at an awesome theater with a great sound system and you go with crazed former fans like yourself. After the second prequel, you walk out wanting to kick George Lucas in the teeth and tell him to wake up, finally, and take a long, hard look at that old, fat guy in the mirror and ask himself, "Did I fail?" Because it's obvious that he never asks himself that, and that is where he fails! Can't he try a little harder to get the magic back?

I can only guess that Ronald D. Moore, the creator of "Battlestar Galactica" (10 p.m. Fridays on SciFi), has reached some similar flabby, self-satisfied state. I can only assume that he's still soaring from that brilliant scene where Edward James Olmos smashed the model ship into little bits at the end of the third season, because this past Friday, "Battlestar" came back for its final 10 episodes, and it was one melodramatic ship-smashing moment after another. Every single scene, we had heavy-handed tripe and no nuance and totally nail-on-the-head, obvious dialogue. Didn't Olmos actually grit his teeth and growl at Col. Tigh in one scene?

(Warning: Below is a recap of Friday night's premiere of the last season of "Battlestar Galactica." If you didn't see it, don't read this.)

Look, I feel bad, because I've loved this series for a long time. Not so long ago, I was a true fan, fully and completely immersed in the little Galactican universe, happy to go along with whatever crazy tangent or soapy twist the show's writers cared to dream up. But Friday's premiere went beyond disappointing. It just wasn't good.

We open on a ravaged planet Earth, nothing but wreckage and black pebbles and broken, leafless branches as far as the eye can see. It looks cold, too, and windy. But this still has to be better than New Caprica, right? It's better than the post-apocalyptic landscape of, say, "WALL-E" or "Heroes," right?

Nope, apparently Earth was nuked 2,000 years ago, and now it's uninhabitable.

Dee, in particular, is really disappointed about Earth sucking. Why do we care how Dee feels? Isn't she sort of a minor character? Wait, is Dee going to die in this episode?

Everyone else stumbles around alone, looking for clues about what happened here. They're shocked, depressed, confused. President Laura Roslin (Mary McDonnell) returns to the mothership, where a sea of expectant faces awaits her. She can't stand to tell them the truth, that Earth is a blackened shell of its former self, that she led them all on a wild goose chase. She doesn't say a word, and leaves everyone shouting questions as she's ushered out. Hmm. Are we supposed to imagine that a leader as polished as the one she's become would leave everyone hanging like that, no matter how crushed she was? I don't buy it. Yes, that's a very dramatic choice, but sometimes you have to choose the more difficult path: Imagine Roslin trying like crazy to put a positive spin on this. That would've been even more painful and resonant and dramatically interesting than her silent treatment.

Immediately after that, we find out that all of the bones on Earth are Cylons. "The thirteenth tribe, a tribe of Cylons, came to this planet and called it Earth!" says Col. Tigh, suddenly recovered from his angry, baffled state and an expert on history to boot. This notion depresses Roslin and Adama even more.

Back on Earth, Chief Tyrol has a flashback, and realizes that he was there when Earth was nuked. Hold on, is this "Heroes" or "Battlestar"? I'm getting confused. Samuel Anders says he was there, too, and he played that awesome song that's been echoing through the four recently discovered Cylons' heads -- you know, "All Along the Watchtower"? I guess this means that Anders is the Cylon version of Bob Dylan. Tory says they were all there, watching Anders sing that song. Oh sweet Jesus, suddenly I feel like I'm at a Burning Man reunion.

Meanwhile, Kara Thrace is wandering around and discovers a piece of her ship. How could she have been there? Then she finds her own dead body. Nooo! "What am I?" she screams at Leoben. Um, you're probably a Cylon, right? Weren't we looking for one final Cylon?

Boy, are things happening fast! What are they going to fill up the next nine episodes with, anyway?

"There were some good times for us, weren't there, on Pegasus?" Lee Adama asks. Do we care about Dee? Are we supposed to care about her for a second, because she's obviously about to die?

Roslin blames herself for this. She even pushes her lover boy Bill Adama away as she's burning her book of prophecies. Kara Thrace, in turn, burns her own corpse. Dee seems happy, then puts a pistol to her head and blows her own brains out. Bill Adama responds by getting drunk and daring Col. Tigh to blow his brains out for him, so he doesn't have to do it himself.

Ugh. Even though all of this makes sense, even though they're all devastated and confused and their entire reason for living has vanished into thin air, everything feels rushed and overblown. We need these revelations to come less quickly, so that they feel a little more weighty and important.

And we don't care about Dee! Come on. We never did. That's like having a Storm Trooper and a random Ewok both die in a gun battle. Who cares? If you want someone to reflect the fact that morale on Galactica couldn't possibly get any lower, at least give us a little time to see that play itself out. Let's have a few substantive conversations, instead of this fast-motion brooding and anger. There's nothing smart or suspenseful happening in this episode, it's just a bunch of old, familiar characters, milling around, looking discouraged and saying exactly what you'd expect them to say.

A big part of the problem these days is that Cylons are suddenly cooperating with humans. I liked this turn of events at first, but the usual, nerve-rattling standoffs and suspenseful interactions are a thing of the past. How do you build suspense when everyone's mumbling and staring into the distance together, Cylons and humans alike?

But even if this episode were a little more hopeful -- "Maybe we can rebuild here anyway!" --­ only to have things fall to pieces in the next episode, that would be better.

And the last scene? With Tigh cut off practically mid-sentence by the rolling credits? I don't know. What does everyone else think? I'm just flummoxed by how bad this premiere was, I really am. When I think of how smart and intense "Battlestar Galactica" used to be! You could always count on finales and premieres to be mind-blowing!

I liked their early stuff the best.

Next week: Toni Collette sparkles in Showtime's "United States of Tara" while the indie rock misfits of HBO's "Flight of Conchords" return for an encore.