In the last moment before hope collides with the awesome task ahead, the president-elect retraces Lincoln's historic rail journey to Washington. 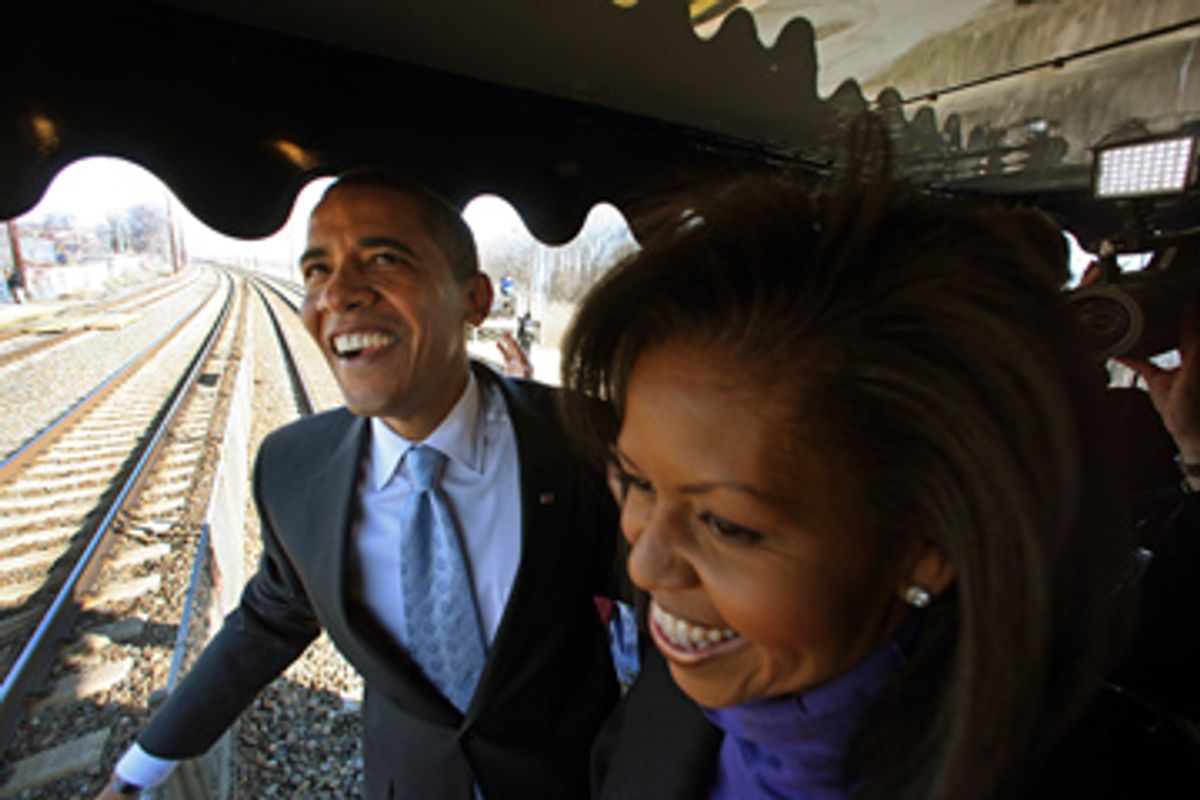 It was a mellow, blissed-out, tiny crowd that came to greet president-elect Barack Obama and his family at Philadelphia's 30th Street Station on Saturday morning and send them on their way to Washington. Maybe it was because the invitation-only crowd of about 250 -- a few local pols and string-pullers, but mostly a batch of lucky volunteers who had been selected to attend -- realized that this was likely the last calm moment they'd ever have with their leader. It was a fleeting instant during which the tension of the election had abated, but the arduous official work of his administration had not yet begun.

After a campaign thick with verse and symbolism, Barack Obama's final push to the presidency -- a whistle-stop train-trip meant to mimic (in form and spirit, if not in perilous circumstance) Abraham Lincoln's rail journey from Illinois to Washington -- was perhaps its most peaceful moment. Before reality and unfulfill-able expectations make it imperfect, here was Barack Obama's unshattered union: his poetic vision of America, and America's poetic vision of him.

Maryalice Leber, a 52-year-old recently laid off from a job in quality assurance, had a seat in the seventh row of the small room off the main station hall, which was, she crowed, "better than I did for Paul McCartney!" While waiting for her future president to arrive, Leber began to cry as she explained that she began volunteering for Obama because her autistic son, a 17-year-old, had devoted himself wholeheartedly to the candidate. Now that her work was coming to fruition, Leber had big hopes for the future about to unfurl in T-minus four days, including "better health care for all," "an end to the war in Iraq," "changes in attitudes about diversity," and "an emphasis on the environment." Then she really got going: "Recycling!" said Leber excitedly. "Composting!"

Nearby stood 19-year-old Jordan Levine, a sophomore and president of the University of Pennsylvania Democrats. Levine was sporting a shirt that read "We Baracked the Vote." He said that his "greatest hope" for Obama was that he would "set a new precedent for including the other side, and people who disagree with him, to form a new coalition."

And that's when the local rhetoric started to fly, references to everything but cheesesteaks -- Ben Franklin, Eagles in the playoffs, City of Brotherly Love -- with a heavy undertone of "we won this election for you." "There is no better place," insisted Nutter, to kick off Obama's journey to the White House, than Philadelphia, a city he called "the birthplace of freedom, liberty, and democracy." Nutter said he stood in front of the crowd "as a proud American, [proud of] what is about to happen in the next couple of days." But, he warned, "there are no easy fixes." When Obama "is sworn in next week, he will not be given a magic wand to immediately solve all our problems."

Rendell was less interested in magic wands than magic poll numbers that he argued made Pennsylvania the key to Obama's trip to D.C.. "When Pennsylvania went blue at about 8:06, we all knew, and we guess senator Obama knew," that he would be the next president, the governor said. Then he related an endearingly muddled story about how he loves Doris Kearns Goodwin's bestselling Lincoln book, but was recently in Arizona with his wife Midge, who gave him "a more obscure" volume, Fred Kaplan's "Lincoln: The Biography of a Writer," which he'd really enjoyed. He held up the Kaplan book as if he were doing a book report, and reported two points about Lincoln that seemed very relevant given the eight-year presidency just ending. Lincoln wanted to limit executive power, said Rendell, and create economic prosperity through infrastructure. Apparently, Ed Rendell is very much in favor of Barack Obama imitating Lincoln in both these regards.

When Specter took the mike, there was a tiny ripple of reaction from some in the crowd, and 21-year-old Penn senior Daniel Eisenberg turned to Salon and exclaimed, with enthusiastic hand gestures and admiring shake of his head, "What kind of a Democratic president invites a Republican to stand up there!" The last time Salon had seen Specter, it was in Perkasie, Pennsylvania, campaigning on behalf of John McCain and against the former Illinois Senator. But on Saturday, Specter was downright collegial, talking about his "enormous respect" for his former Senate colleague, and how "the way he's captured the imagination of America and the imagination of the world and swept to the presidency, is truly historic."

After Casey trotted out an obligatory Ben Franklin-minted punchline -- the Obama administration is a rising sun (Franklin had famously called the new U.S. a rising and not a setting sun) -- the welcoming committee cleared out. In the awkward in-between phase, some jaunty, Ken Burns-history-documentary-style music began to jangle from the sound system. It perfectly primed the crowd for the arrival of the devastatingly attractive Obama family, all dressed in jewel tones and hope.

Obama promptly poured on the Philly-love, 1776 variety, discussing the "farmers and lawyers, merchants and soldiers [who] gathered to declare their independence and lay claim to a destiny that they were being denied." (I bet you can see where this is going, right?) The project of the country's founding generation was a risky one, Obama noted. "There was no guarantee that their fragile experiment would find success. More than once in those early years did the odds seem insurmountable. More than once did the fishermen, laborers, and craftsmen who called themselves an army face the prospect of defeat."

But, Obama argued, he was not here simply to pay tribute to "our first patriots," but "to take up the work that they began," by facing head on the challenges -- economy, wars, a warming planet and dependence on oil -- ahead of us. "While our problems may be new," said Obama, "what is required to overcome them is not." He cited perseverance, idealism, "a new Declaration of Independence, not just in our nation, but in our own lives," from ideology, small thinking, and bigotry.

"The American Revolution did not end when British guns fell silent," said Obama. "It remains an ongoing struggle in the minds and hearts of the American people, to live up to our creed."

The president-elect's use of historical metaphor was powerful. Contextualizing hoped-for improvements -- to our roads and bridges and flawed union -- as an ongoing process was smart and seductive. It situated the listening crowd side-by-side with the founding fathers at the point of revolutionary rupture, with Abraham Lincoln tending a fractured nation, with Martin Luther King. Soon the din, and the disappointments, of actual governance will drown out some of the lyricism, but for a moment Obama had made us all actors, playing parts in the growth of our nation.

"I am glad that hope has returned to the United States," said Robyn Major, 53, a federal worker who said that she expects her day-to-day life to change dramatically after next week. "I will be worried more about delivering service promptly, than about 'I's I didn't dot and 't's I didn't cross. This election will return dignity to me as a public servant. It will make public service a proud profession again, not just something to do when IBM isn't hiring."

Everyone in Philadelphia, it seemed, had a wish-list for Obama: "Education, education, please protect our children," said highway construction union president Mike Daniels, adding that he also hopes for more infrastructure improvements.

"As a state legislator, I hope he will help states balance their budgets," said 68-year old State Senator (D) Michael O'Pake, noting that Pennsylvania has a two billion dollar deficit, and that he'd just met Michelle Obama after the speech and told her "how nice and trim she was, and asked her what kind of exercise regimen she's on."

"I want to see universal healthcare," said Debbie Bernstein, 43, who was sporting Obama earrings made from Shrinky-Dinks.

Interviewed after Obama's train had left the station, Sen. Casey told Salon his own hopes included a desire for public awareness of what a hard job lies ahead. Casey said Tuesday will be "a great day to celebrate our Democracy, but also to understand that it's a celebration tempered by the challenges we face." Casey believes that Obama has so far "struck the right balance between hope and optimism and confidence ... balanced by the reality of how difficult its going to be." Over the next six months, Casey believes we'll see "the implementation of plans to dig us out of the ditch. We're a car in the ditch and we need to get the car back on the road." But he emphasized that most Americans, "are not going to see results for a while. It's going to be at least six months. It's going to be a tough road."

And then the Abe train was chugging further south, past crowds who'd gathered alongside the tracks to wave at the retro caboose, to sing "Happy Birthday" to their future First Lady, to catch a glimpse of a presidency that is still all bright possibility. A crowd of 8,000 gathered in Wilmington, Delaware, where Joe Biden boarded the train, as he'd done day in and day out during his 36-year Senate career, raising his sons and going to work every day on commuter rail.

After Wilmington, the train headed into Baltimore, where 40,000 people had gathered. The largely black crowd had waited, standing, for seven or more hours in frigid temperatures. Wrapped in coats and hats and blankets, they cheered and clamored for Obama's arrival -- an arrival that, given the weather, he was polite enough to make on time. "I love you back!" he yelled to one vocal well-wisher in the midst of his speech.

"This country is in constant revolution," said Adon Cherry-Bey, 31, "and it's about to take a big step further. And you know what he has already changed that is important? The way the world looks at African-Americans. The world gets to see us in a new light. He shows us as we are."

What did 42-year-old Bernadette Andersen think Barack Obama was going to change? "Everything!" she shouted. "Everybody!"

Several rows of people behind her, an African-American woman yelled: "He's already changed everything!" How? I yelled back at her. I couldn't see her face anymore, but I heard her shouted reply: "Everybody's talking to us. You're talking to us right now."