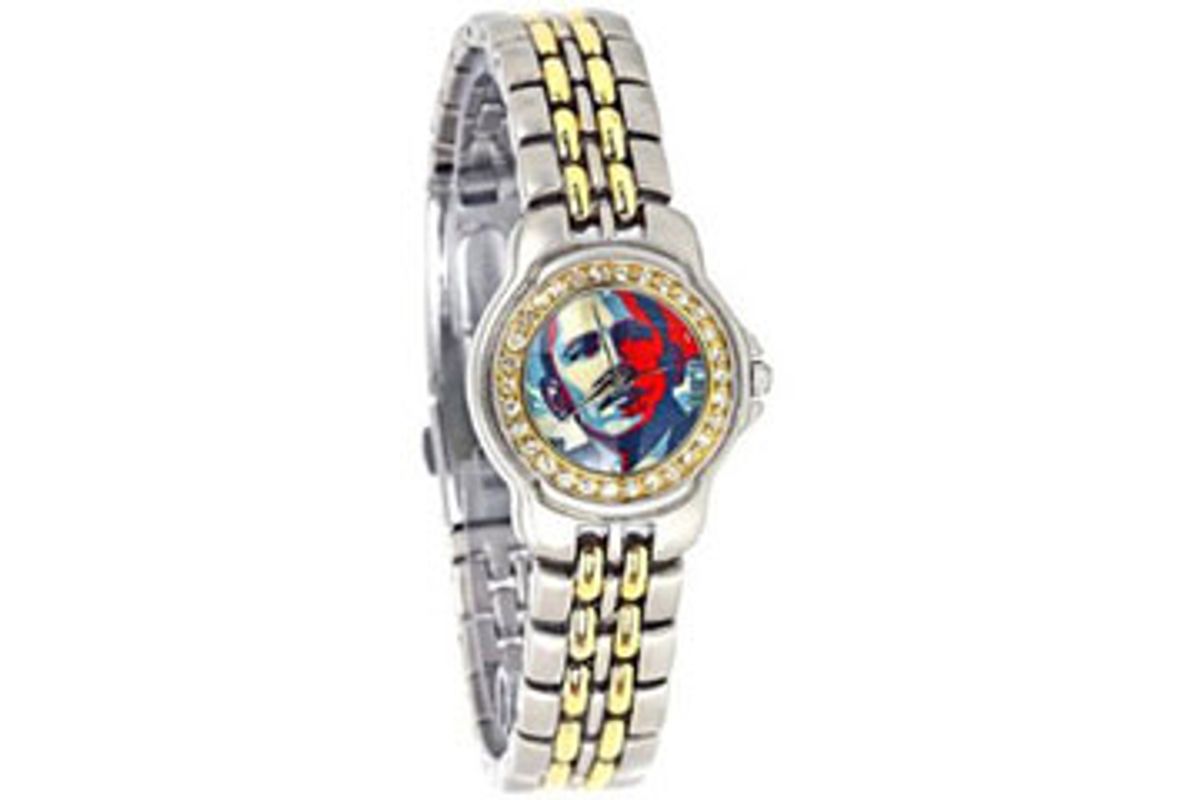 The other day, curious how far the Obama madness had spread, I Googled the words "Obama sex toy."

God bless America: I was not disappointed.

But wait! There's more! There is the Obama votive candle, the Obama nesting dolls, the Obama wall hanging. And lest you feel hampered by details, rest assured that an Obama product doesn't even have to actually resemble Obama: It could resemble a rather frightening Bill Cosby. Or a very tan Ed Sullivan. Or, umm, whatever this guy is.

Basically, you can slap the word "Obama" on anything and watch that puppy fly off the shelves. There is the new Ben & Jerry's ice cream, "Yes Pecan." ("An Inspirational Blend! Amber Waves of Buttery Ice Cream With Roasted Non-Partisan Pecans.") There is the Obama inaugural chocolates. (As one colleague quipped, "If only he had trademarked the black-and-white cookie.") Say what you want about our economy -- like, for example, it blows -- but it's a good time to be in the Obama business.

As department stores cough up a lung trying to lure us back to the fold of Tommy Hilfiger and Liz Claiborne, street salesmen and Web vendors are watching their wallets grow fat unloading Obama product, from buttons to action figures. The New York Times recently ran a story about the glut -- enumerating everything from Obama thongs to inaugural hot sauce, not to mention Pepsi's and Ikea's new Obama-inspired ad campaigns -- but the story neglected to mention that the cash-strapped Times, like several newspapers, has also been cashing in on the fever, selling copies of memorable photos and its coveted Election Day paper ($14.95, $379 framed). You can preorder your copy of Jan. 21 issue  now. And this is not just a trend endemic to Washington or New York. In Austin, Texas -- a city where W. himself long cooled his Stetsons -- there is an entire store dedicated to Obama merchandise.

I'm not much of a shopper. I haven't collected anything besides credit card bills in some time. But I occasionally feel the tug of this stuff. It's a perfect storm of consumer coercion: Supplies are limited! Prices are cheap! Own a piece of history you helped create! I spent so much of my life disappointed by my country, sneering at politics -- or, worse, just not paying it much mind at all -- that, by god, I'm going to savor this moment. I'm going to buy a goddamn button.

Of course, the consumer fever also points to an uncomfortable truth about our country as well -- our need to acquire, to possess, to exploit. Even more insidious, perhaps: our craving to get rich quick. In December, I watched the Obama coin infomercial with equal parts horror and fascination. Hosted by Montel Williams, the 30-minute spot is the apotheosis of shallow hucksterism: "I am so proud to be a part of this incredible offer," assures Williams, going on to unveil $20 "fancy coins" that may just appreciate in value! "Who would buy these?" I wondered, agog, but plenty did. Enough that coin collectors emerged from their dank storehouses to warn us of our folly. "They are worth the face value of the coin," New York City coin dealer Scott Travers told USA Today, and I hope he rolled his eyes and made a "duh!" motion when he said it. "If the coin says 25 cents, it's worth a quarter."

But in this endless stream of merchandise the tireless spirit of American entrepreneurialism is churning away. Where there is a market need, we will fill it: Obama perfume? Done. Obama lip gloss? You betcha. To browse the Café Press Obama store of custom-made products is to witness how consumerism can fuel the creative impulse. A zillion T-shirts, each one different. Like snowflakes.

"Here's another thing that shouldn't exist," sneered Gawker, posting a T-shirt with Obama depicted like Bob Marley and streaked by the colors of the African flag. But I submit that it should exist, that we need this -- just like we need crocheted hackey sacks, your name on a grain of rice and, well, snarky blogs devoted to the media. Someone wanted that shirt enough to make it, and someone wanted it enough to buy it. Is there really anything wrong with that?

Besides, some of the art inspired by this campaign has been downright iconic. A friend told me that a signed copy of the Shepard Fairey Obama poster was the top seller at her son's school auction. Who would have thought the guy who plastered urban areas with Andre the Giant stickers would find his work in homes across the globe, co-opted and endlessly mimicked, so instantly recognizable that it could wind up on the face of a watch -- as if it were the "Mona Lisa" itself -- surrounded by diamond bling?

Buried inside a pile of Obama collectibles is a portrait of the American dream, really. Just think: Only in this country could a little black boy be born with so little, work so tirelessly, navigate the violent waters of prejudice, of precedent, inspire so many with his message, and grow up to find himself president of the United States -- and plastered on a roll of toilet paper.