This land is our land

Beyonce, Bruce Springsteen, Bono and Pete Seeger topped the talent at the "We Are One" concert -- but Garth Brooks almost stole the show. 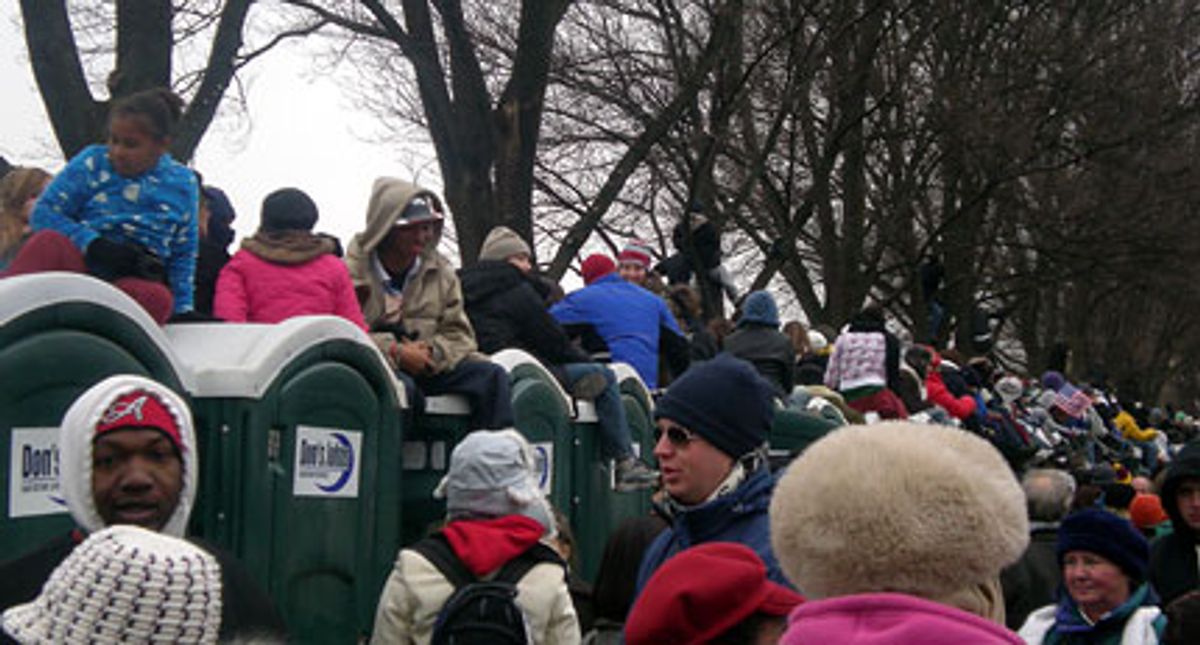 I was supposed to be Tweeting from the Lincoln Memorial concert today, but it turns out Tweetin' ain't easy, in a crowd estimated at 400,000. I couldn't get on the Internet most of the time, could rarely text, e-mail or get a cell signal. It seemed strange to be so technologically thwarted on a day celebrating the victory of the world's most wired politician and campaign. But that meant ultimately I could stop trying to communicate and just enjoy it, and I did (once I tuned out the sight of sharpshooters lining the top of the Lincoln Memorial).

If you're looking for snark, go elsewhere. (OK, the bald eagle thing was kind of hokey.) I am officially over my Rick Warren tantrum (at least until I see him Tuesday); between Episcopal Bishop Eugene Robinson's moving blessing to open the concert, to the San Francisco Gay Men's Chorus singing "My Country Tis of Thee" where Marian Anderson sang it almost 70 years ago (after the Daughters of the American Revolution kept her out of Constitution Hall because she was black), followed shortly thereafter by the Navy Men's Glee Club. Rick Warren, you can't take that away from me. When the openly gay Robinson called on God to "bless us with anger -- at discrimination, at home and abroad, against refugees and immigrants, women, people of color, gay, lesbian, bisexual and transgender people," I knew we're not in Dick Cheney's America anymore.

If you'd told me that Garth Brooks would sing more songs than any other entertainer, including Beyoncé, Bono and Bruce Springsteen, I'd have been prepared to be disappointed. But for me one high point was Brooks doing the Isley Brothers' "Shout" -- it helps if you saw the movie "Wedding Crashers'" great montage showing lame cover bands doing "Shout" at weddings of every race and culture, Jewish, Indian, Irish, African-American. Yes, I'll admit that made me think of Obama presiding over a sappy interracial wedding, and watching that sea of arms flying up every time Brooks said "throw your hands up" was one of my favorite moments of the day.

The genius of the whole event was the culture mashup -- readings presented by duos like Steve Carell and Jamie Foxx, Jack Black and Rosario Dawson, Laura Linney and Martin Luther King III, Forest Whitaker and Ashley Judd -- yes, Jack Black. Likewise, Jon Bon Jovi and Bettye LaVette's duet on Sam Cooke's Obama anthem "A Change Is Gonna Come" was extraordinarily moving. My personal high point -- I'd have braved the cold and crowds for this moment alone -- was Pete Seeger and his grandson, joined by Springsteen, singing all the lyrics to "This Land Is Your Land" -- and watching Obama sing along. The only remotely controversial note (beyond Robinson's prayer for anger at discrimination) was when Bono called the values embodied in Obama's election "an American dream, an Irish dream ... a European dream, an African dream, an Israeli dream," and then added: "And also a Palestinian dream."

Obama himself called the celebration an expression of "just what it is that we love about America." And where I was disappointed that Obama only slightly nodded to Dr. Martin Luther King Jr. in his Denver acceptance speech (on the 45th anniversary of King's "I have a dream" speech), today his praise and attention to the parallels of their cause was full-throated and moving. Obama's voice deepened and grew louder as he talked about King's dream "that his children might be judged on the content of their character." He also praised "the man who made this day possible," Abraham Lincoln, and said American progress will come "if we could just recognize ourselves in one another."

And yes, then there was Garth Brooks. The entire crowd -- young, old, black, white, Latino, Asian, everyone -- seemed to sing along to "American Pie," including Obama, which could mark him, generationally and culturally, more than anything else that happened today. Who knew they knew all the words? I didn't until today (actually, Brooks wisely shortened it). And I couldn't help seeing Brooks, singing along with a multiracial youth choir, as another part of Obama's outreach to red America, a real reminder that he doesn't plan to be president of blue America, or red America, but the United States of America. I hope Republicans get the message.

I think this will go down as one of the best days of my life for a long time, except for the fact that I had to make a kind of comic "Sophie's Choice": I had a press credential and my college-student daughter didn't, so she headed for steerage when I got to the press tent. I told her I'd probably just come out and join her in the crowd, how could I see it without her -- until I saw that the press area had uniquely awesome views (they don't always) and I couldn't imagine leaving. We texted throughout, and she shared her great stories of the real event -- topped by people climbing on Porta-Potties to get a better view, then being ordered down by police, then being unable to get down, then being rescued by men in camoflauge. I missed her when Pete Seeger sang "This Land Is Your Land," because I used to sing it to her 19 years ago, when she was a baby.

It was the kind of event that made you want to share TMI personal details like that -- and also the kind of event where you didn't need to know a soul to suddenly be surrounded by friends and family. Nora and I met up afterward for the long trek home, and we felt lucky to have two sets of views of this historic day. For the first time in my adult life, to paraphrase Michelle Obama, I am crazy in love with my country, and it was fun to attend this schmaltzy sort of wedding to celebrate the change that's gonna come. I reserve the right to update this post later, when I slap my forehead and say, "How could I not have written about that?" Or maybe I'll just Tweet it.