It's all about Michelle's dress

Fashionistas are in a fever pitch over the first lady's inaugural ensemble. 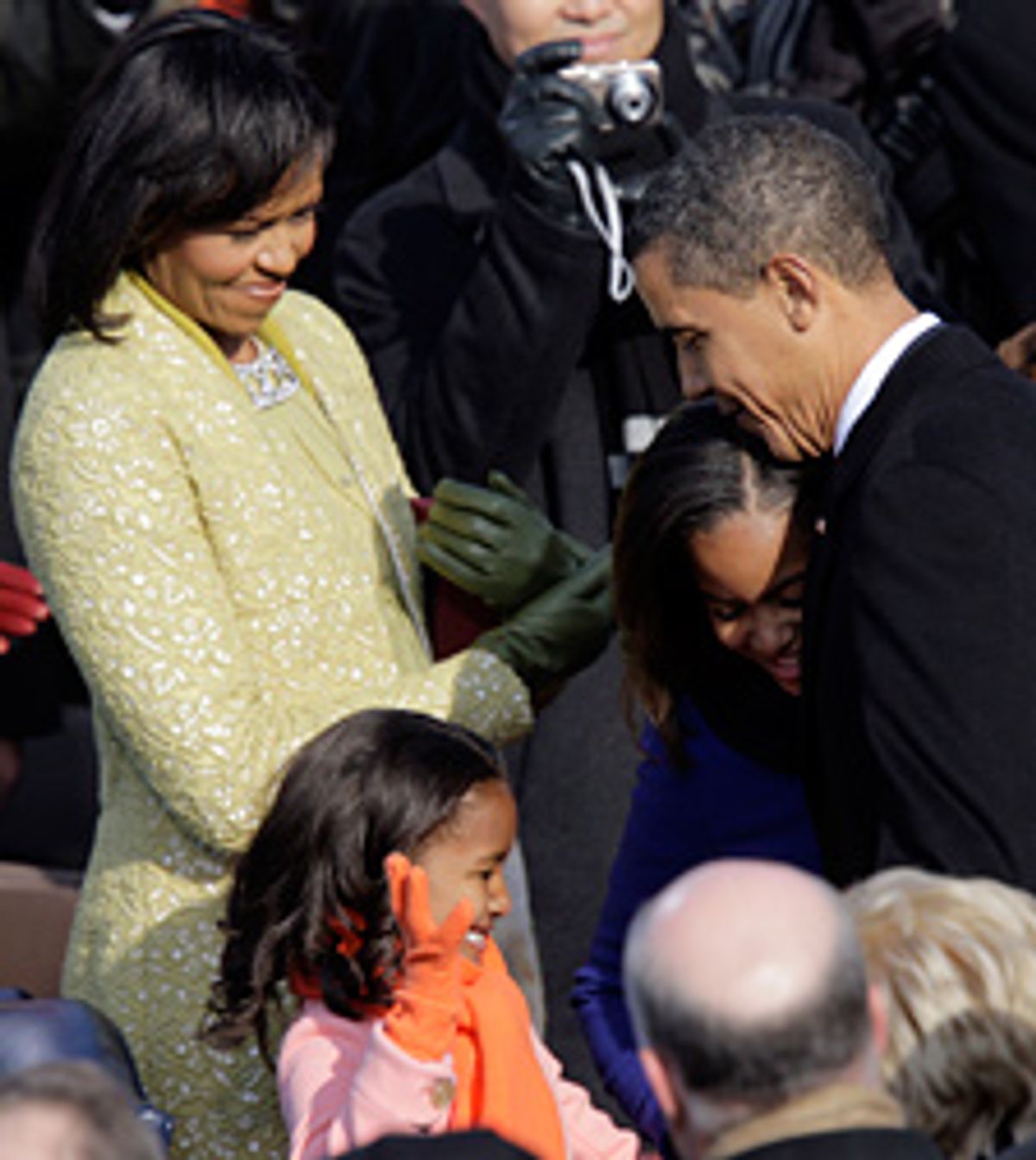 President-elect Barack Obama embraces his daughter Malia as his wife, Michelle, and younger daughter, Sasha, look on as they arrive for the inauguration ceremony Tuesday.

Today's news is dominated by reports on the 1 million-plus crowd at the National Mall for Inauguration Day, the significance of this historic moment in civil rights and reactions to Obama's first speech as president. But, as I write this, the second top headline on Google News is: "First Lady Michelle Obama's inaugural outfit." Below the headline is a link leading to all 685 related news articles.

In other words: Not only is sartorial chatter defining today's commentary on our new first lady, it's also leading the Inauguration Day news at large. Today, everyone has an opinion on Michelle's inaugural appearance -- from the arc of her eyebrows to her shimmering yellow-gold dress by designer Isabel Toledo, which will go on sale this March at Barney's for roughly $1,500. A sampling:

Examiner: "I am loving how Michelle is being bold with her apparel choices. This color is optimistic and is ambitious in terms of style. It's not that conservative, but it is still chic and proves that the first lady has a cunning sense of style."

TIME: "Although the First Lady's office repeatedly said that Obama would not decide on her outfit until this morning, the choice -- including the color, fabric and accessories -- shows a lot of confidence and planning on the wearer's part."

Allure: "Let's analyze: the shape and structure are conservative; the color and texture are bold -- in that way, sort of like Barack Obama's cabinet. Michelle O's clothes will certainly make her stand out in the crowd, not that she needs any help in that department. The color is cheerful, sunny, optimistic, and that's a welcome message today."

Glamour: "Tres chic! Only thing is that she stepped out with no gloves, no hat, no earmuffs -- nada! Clearly she’s ready to brave the cold -- and her new role -- in style."

Washington Post: The "excitement about Michelle Obama is emblematic of a wider appeal, the carefully honed image connoting an all-American archetype. It's functional-family time. J. Crew spams us with pop-up ads for the outfit Obama wore on 'The Tonight Show,' and the Donna Ricco dress she wears on 'The View' sells out at White House/Black Market."

Politico: "To fashionistas, she’s Michelle O, the new Jackie – and they hope she’ll send women to the malls in droves, looking to match her style ... her dazzling turn on The View wearing a black and white summer dress (some read the pattern as some coded comment about integration), caused a run on the dress. Fashion experts say she is a bridge-builder when it comes to what to wear—she mixes off the rack with couture."

Stylelist.com: "The perfectly arched eyebrows you see at today's Inauguration stand in stark contrast to the brows she sported earlier in the presidential campaign. Michelle's eyebrows began making news late last summer -- for their overly-arched shape that gave her a severe, angry look … Obama's brows today are thinner and more filled in with a lighter brow pencil than they were this summer. The arch does not seem to be any less prominent, but since the inner brows are thinner than before, the arch appears less severe."

So far, she has managed to escape the scathing attacks inspired by her election-night ensemble. But, keep in mind, First Lady Fashion Watch has only ... just ... begun.