A day at the Mall

Two million came to D.C. to brave the crowds and the cold -- and to see their country change. 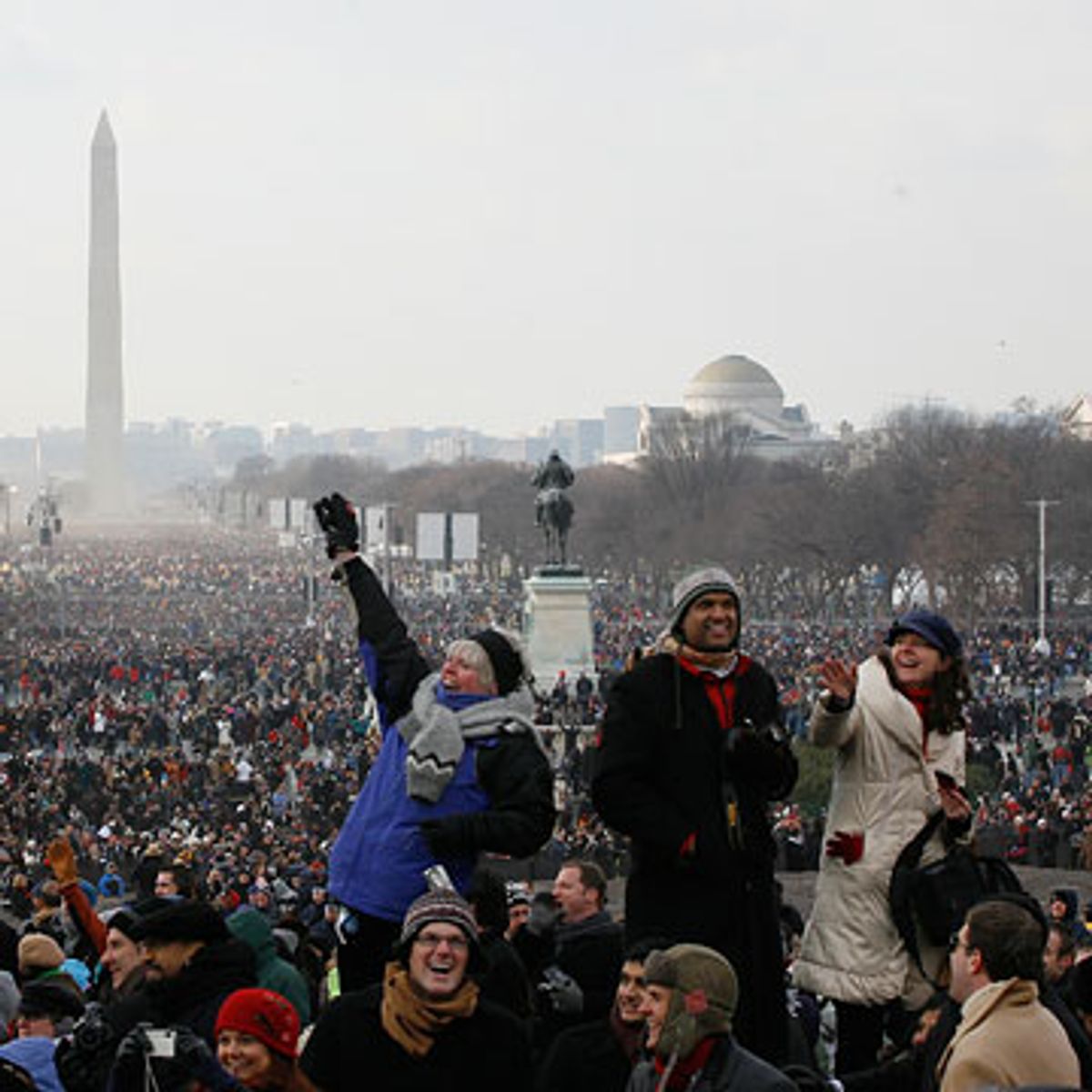 Tuesday, Jan. 20, began, for more than a million people here, in inky early hours that gradually faded to a pale blue morning. The weather was absolutely bone-chilling, but the energy was bright as bundled figures of every shape and age and persuasion poured out of metro stations and cabs and buses and over bridges and into the heart of the capital.

"Happy Inauguration Day!" they said as they passed, greeting each other with a level of joyful familiarity typical of days on which Voldemort has been defeated. This was the day that Barack Obama was to become president and George Bush was to stop being president. It was the day that, for many Americans, this country became their own for the very first time. On Monday, Faye Walker, an African-American dancer and teacher in Washington, told me that she had been thrown out of schools for refusing to say the Pledge of Allegiance, because, for her, the words had never felt true. Tuesday, she said, would be the day she'd finally be able to put her hand over her heart.

And for the 2 million people who decided to honor this day by driving, flying, busing, training or walking to D.C. to pay their respects to the new president, the journey began very, very, very early. As one of them, I wish I could report that the ground warmed beneath our feet and the paths to the Mall were open and paved with hot beverage vendors. Alas, this was not the case.

"We were all stuck in the L'Enfant Plaza metro station for an hour, and someone behind us got heat stroke and threw up all over the place!" said Mary C. Davis, a 28-year-old Washington, D.C., actor, of her journey to the mall.

She was not the only one who found the process of getting to the ticketed areas in front of the Capitol building, or to the open seating in the Mall, arduous or scary or gross. My colleague and I spent a good two hours walking about 10 blocks, waiting in 40-minute lines for a Starbucks bathroom, finding roads blocked to foot traffic, and guards bellowing contradictory directions. There was little signage indicating where people should go; lines for ticketed entrances snaked for blocks, since the gates had not opened, but the Metro was spewing out people by the thousands. Random barricades created some scary, stampede-y bottlenecks, at one point pinning a large group of us -- poignantly -- between the FEMA building and a chain-link fence.

There were other reports of people-moving problems, some of them more harrowing than others. John Choe and Eunice Yang ran into trouble around 3rd Street. Apparently, people who weren't ticketed were standing in lines for ticketed areas, while spectators with tickets were being told to go to the wrong places. "The volunteers would say one thing, the police would say another," said Yang. "It was like, dude, make up your minds!" She paused. "But we're here now. So that's good."

"I am ecstatic," said Glendar Haskin, 60, a chemistry teacher from Altadena, Calif., adding, "but it's 81 degrees back home!" Haskin said she'd been one of the first students to integrate Louisiana State University. "And one of the best things about it is that this is the first time that the world has really celebrated Martin Luther King Jr.! This is about people sharing a common vision. And you know what happens when people share a vision? Things get done."

Donna Doyle was leaning heavily on a cane. The 57-year-old Queens resident explained that she's disabled, and that while she didn't know if her legs would hold her for another few hours, she couldn't believe she'd come this far. "I can't believe I'm here. I did make it. I really made it." It seemed that she was speaking about more than her body. "I tell young people that you really cannot understand the feeling we have, the old folks." The best part of her full year spent campaigning for Barack Obama, she said, was so often having four generations of her family together in the same place, for the same cause. Doyle shook her head. "Never in my life did I believe I would be here," she said again.

But she was, and in front of her on the Jumbotrons, the dignitaries were lining up to come onstage. The crowd, which had been milling and talking and doing a little singing along to the replay of the opening ceremony concert's "This Land Is Your Land," began to focus more sharply on the screen. Joe Lieberman got a light round of jeers. Then Colin Powell walked on; a huge cheer went up. Then a louder on, this time for Oprah! Then the loudest yet -- for Jimmy Carter! Yes, that is totally true. Jimmy Carter got more applause where I was standing than Oprah. "It's like the country's been given back," said a woman standing a few feet away, shaking her head like she was trying to get water out of her ears.

The members of the House of Representatives walked onto the platform, then the governors, then the senators, the vice-presidents and their wives, the presidents and ... "Hillary, we love you, girl!" came the bellow from behind me. A group of women were jumping and yelling for Hillary Clinton, who had walked in with her husband as the spouse of one of the living presidents.

"Why can't she come out as a senator or the secretary of state?" said Ayanna Anthony, a 24-year-old accountant from D.C. "Why is she coming out as the wife of some man who's not even president anymore?"

That's why she can't be president," replied 25-year-old New Yorker Nicole White. "Because Bill's always going to come first, and because in America that's how it always is; you're the wife first."

"That just sucked," Anthony said. "Why couldn't they have introduced him as her husband?" White shot a withering look. "That would never happen."

A few minutes later, the screen showed Dick Cheney, somehow looking more dastardly than ever in his wheelchair after a strained back, and the boos got long and lusty, and even more so for the Bushes, who looked so ... small on the big screens. It seemed impossible to imagine while surrounded by the stereophonic jeering that the Bushes could not hear the hate on the steps of the Capitol. It seemed impossible that they could not hear it on the moon.

But soon there was hollering for Michelle Obama, with Sasha and Malia, and then, a pause of quiet.

"It's the moment before the bride comes out, y'all!" said a voice behind me.

And from where I sat, this silent second was perhaps one of the most profound of the day. There was nothing happening but stillness among people who knew that in just a moment, something wrong was about to be put right. Not everything. But something.

And before you knew it, the silence broke, and Dianne Feinstein was saying that "the dream that once echoed from the steps of the Lincoln Memorial has finally reached the steps of the White House." There were smiles and hugs and flags distributed. There was a grumble of disenchantment when Rick Warren's name was called, but then a sea of obediently bent heads. Justice Stevens swore in Biden. Waves of flags and anticipation of what came next: the bride.

That part seemed to happen so fast. A stumble in the oath, Lincoln's tiny, shabby Bible held, and then all around me on the Mall were tears and embraces and flag waving, but a funny feeling that, after all that, the final moment of completion -- of this man becoming president -- had been so swift, so simple, really. That was it. A minute, no more, and the face of the nation was different.

"What the cynics fail to understand is that the ground has shifted beneath them," President Obama was saying, and I was turning around every which way, ogling the crowd. As it turned out, the crowd was ogling each other, wondering about who everyone else was and why they were here and how they were feeling and if everything really was different and what we do next. I wish I could say that around me the masses of people of every stripe and color were hanging on their new president's every word, but I can't: Mostly, everyone was drying their eyes and taking pictures and video of one another. In a sense, living out the words that were coming from the steps of the Capitol, trying desperately to document, as best we knew how, the day we'd come to see this new country born.