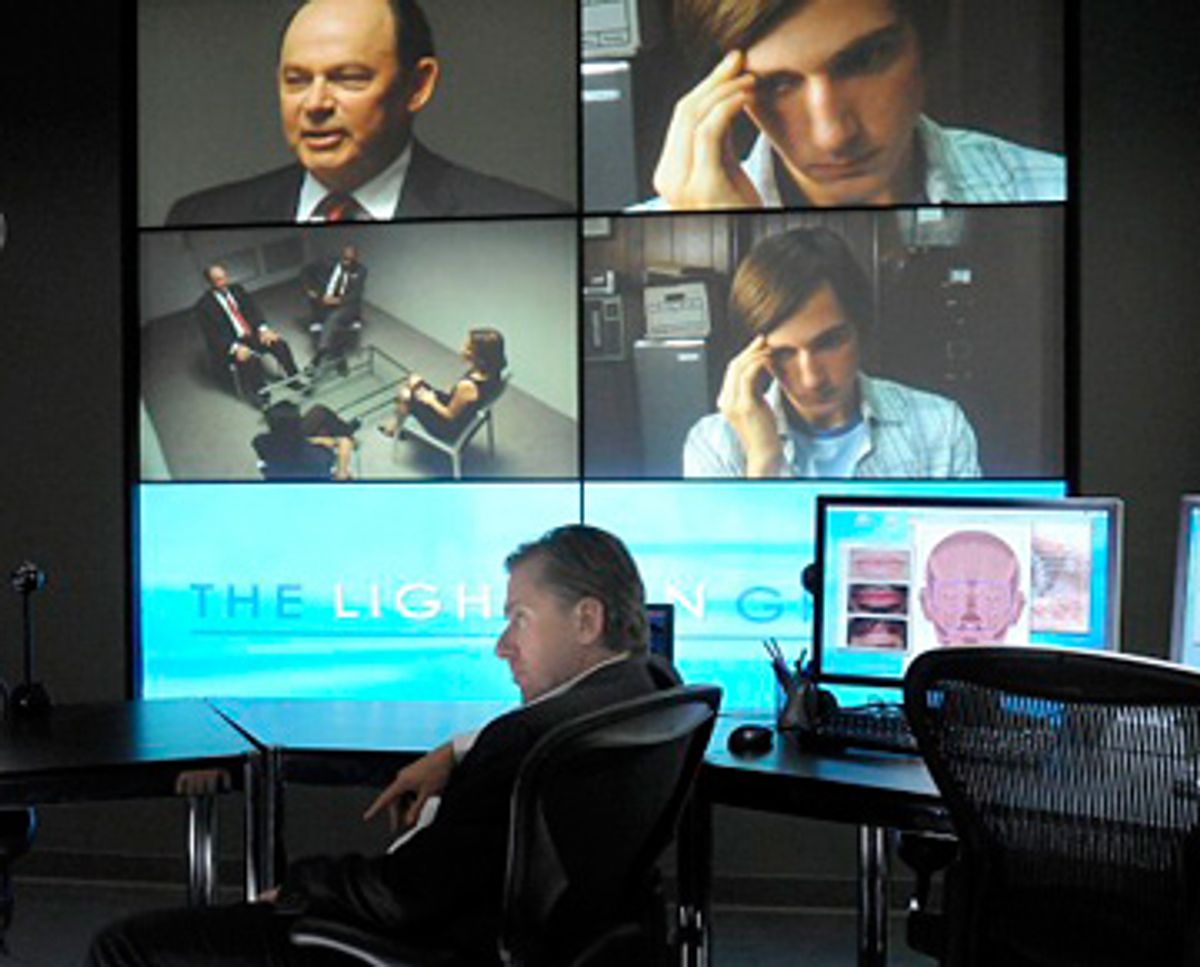 In the realm of procedural dramas, the quirky genius who can see right through you is nothing new. It made a star of Vincent D'Onofrio on "Law & Order: Criminal Intent." It made a hit out of CBS's "The Mentalist," in which Simon Baker plays a disturbingly observant detective. And that's not to mention Patricia Arquette's clairvoyant on NBC's "Medium," the seers of USA's "Psych," and the mathematical geniuses who use digits to solve crimes on CBS's "Numbers." These days, a crime drama without a brilliant oddball is like a sitcom without a hapless dad.

Fox's new drama "Lie to Me" (premieres 9 p.m. Wednesday, Jan. 21, right after "American Idol"), then, is hardly breaking new ground. Starring Tim Roth as Dr. Cal Lightman, an expert at "deception detection" based on psychology professor and lie-detection specialist Paul Ekman, "Lie to Me" includes all of the elements you'd expect from the snippy-guru procedural: Roth as the outspoken eccentric with a head-spinning knack for sniffing out lies and the lying liars who tell them; Kelli Williams ("The Practice") as Lightman's sexy sidekick Gillian Foster; a gaggle of quirky underlings like Eli (Brendan Hines), the compulsively honest but still unnaturally handsome right-hand man, and Ria Torres (Monica Raymund), the beautiful young recruit who scored off the charts on her deception-detection tests. With so many predictable elements in play, you'd expect "Lie to Me" to amount to a series of tired exchanges rife with clichés, a crime that's impossibly easy to solve and an ending that centers around an unlikely confession.

OK, fine, so maybe the pilot does wrap up with your typical teary-eyed confession. Otherwise, though, "Lie to Me" is as thoroughly entertaining and charming as its fine-looking cast of characters. Like a plucky cross between "House" and "The Mentalist," but with a little less angst than the former and a little more flair and witty dialogue than the latter, "Lie to Me" dabbles in seriously dorky, expected fare -- a politician frequenting an escort service, a God-fearing, judgmental teenager who may or may not have been stalking the murder victim -- yet somehow manages to avoid feeling like just another leaden dippy crime drama pilot. (Writers of CBS's "Eleventh Hour," I hope you're taking notes.)

Writers Samuel Baum and Dustin Thomason have penned a fast-paced, clever script that we can only hope will be matched as the series continues. Take this bread-and-butter crime drama pilot scene, in which compulsively honest hot-weirdo Eli falls for tough-talking newbie Ria:

Eli: (From across the room) I would like to sleep with you.

Cal: Eli Loker, Ria Torres. He's harmless. Just always speaks the truth about what's on his mind. What do you call it?

Cal: That's it. Well, he'll get you started on running our facial coding system.

Ria: You always tell the truth?

Ria: How good are you in bed?

Ria: (walking away) Fair's better than most.

Why is it so satisfying to see the cute freak win over the world-weary tough girl? As smart and snappy as Fox's "House" is, that show favors angst and kvetching and missed connections over these sorts of satisfying moments, while "Lie to Me" is propelled forward by them. And that's not to mention the dozens of tossed-off witty lines along the way. When the U.S. attorney's office arrives to watch Cal and Gillian interrogate a suspect, Cal quips, "I guess we're all here then. Someone who wants the truth, someone who wants to be right, and us, the assholes. Stuck in the middle." Later, when Cal asks Ria if she's had any specialized deception training, she deadpans, "I've dated a lot of men."

Like Dr. Gregory House, Cal Lightman is prone to making harsh statements: "The question is never simply if someone is lying -- it's why." "Truth or happiness, never both." We get it. Lightman thinks that most happy people are fooling themselves, and even though he can see through to the truth, he's more than a little hesitant to shake people out of their stupor and show them the light. After all, they'll just end up bitter and world-weary, like him.

But hopefully Cal is a little less bitter and world-weary than his gimpy doppelgänger over at Princeton-Plainsboro, because "Lie to Me" has a buoyant, witty tone and flirtatious manner that makes it a little more appealing and potentially addictive than "House" is after all these years.

Or maybe "Lie to Me" is a just a little less realistic. Sure, Cal's knack for reading facial tics is based on Ekman's years of research, but Cal wields his skills like a magician, flanked by a team of gorgeous geniuses with great senses of humor. So why are we so willing to suspend our disbelief?

Remember Cal's words? "Truth or happiness, never both." "Lie to Me" serves up just enough of each to keep us coming back for more pretty little lies.

Lie To Me Television