An economic Bill of Rights for Americans

We need a new citizen-based Social Contract that would deliver universal healthcare and paid family leave. 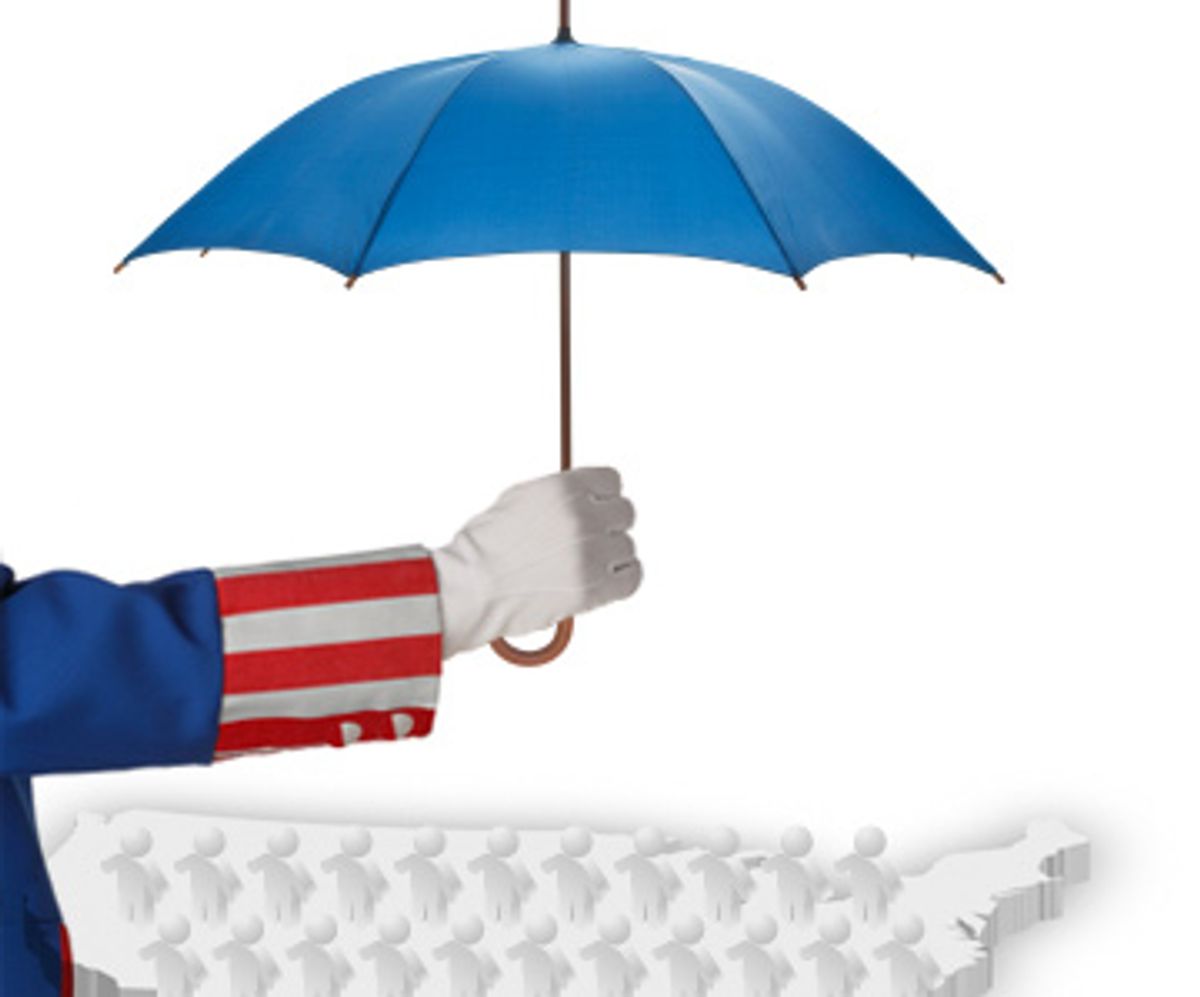 On January 11, 1944, in his annual State of the Union Address, President Franklin Delano Roosevelt called for an economic bill of rights. The rise of totalitarianism, he said, had taught the lesson that "necessitous men are not free men" because the miserable and the desperate "are the stuff out of which dictatorships are made." According to Roosevelt, "In our days these economic truths have become accepted as self-evident. We have accepted, so to speak, a second Bill of Rights under which a new basis of security and prosperity can be established for all -- regardless of station, race or creed." Among the economic rights that FDR discussed were the right to protection from fear of old age, sickness, accident and unemployment; the right to adequate medical care; the right to a good education; the right of every family to a decent home; and the right to a "useful and remunerative job." With the coming of the Obama administration, it's time for the nation to make this second Bill of Rights a reality.

For 65 years libertarians and conservatives have mocked FDR's vision, either as a utopian dream or a sinister collectivist plot. But they have lost the argument. The great social insurance programs of the New Deal liberal presidents, FDR's Social Security and LBJ's Medicare, remain popular among Republican as well as Democratic voters. When George W. Bush proposed the partial privatization of Social Security, the idea got such a lukewarm reception from Republicans that a Republican Congress killed it without a vote.  After two Wall Street meltdowns in less than a decade, only the most fanatical libertarian ideologues still favor diverting Social Security payroll taxes to the stock market.

Having lost the argument over turning over retirement security to Wall Street, right-wing deficit hawks are forced to spread false claims about the imminent bankruptcy of Social Security, which in fact can be rendered solvent forever with minor tweaks or robust economic growth. The cost of Medicare is skyrocketing, but it is being driven by economy-wide healthcare costs that affect the private sector as well as the public sector. The problem is not big government, because democracies with government-run healthcare systems have not experienced anything like America's healthcare cost inflation. Honest conservatives like John McCain's economic advisor Douglas Holtz-Eakin have the integrity to admit that if the health cost inflation of the U.S. medical and insurance industries were controlled, the aging of the population would increase combined Social Security and Medicare costs by no more than a few percent points of GDP in the next half century. The U.S., which has far smaller government than most industrial countries, easily can accommodate the minor increase in entitlement costs caused by the aging of the population alone.

While the right has failed in its campaign to destroy Social Security and Medicare, it has succeeded in preventing the completion of the American social contract. Alone among advanced industrial democracies, the U.S. lacks universal health coverage for all adults. 44 million remain uninsured. The system of tax-favored, employer-based insurance in the U.S. is not only inadequate but also skewed toward the affluent. A disproportionate amount of the federal tax benefit for employer healthcare plans goes to the haves, while the have-nots, the millions of workers without coverage, end up in the emergency room.

In the 1990s, the U.S. adopted the child tax credit, the long-overdue American version of the child allowances of other advanced democracies. But the U.S. still lacks paid leave for childbirth and family care -- a distinction it shares with only a few other countries, including Papua New Guinea, Lesotho and Swaziland. Only the states of California, New Jersey and Washington have paid family leave programs out of a payroll-tax-financed state insurance fund. Nothing illustrates the hypocrisy of the "family values" right more than its support of an inhuman system that forces many mothers of newborn infants back to work in a few days on penalty of being fired.

Now that the free-market conservative era is over, dragged down into oblivion with Wall Street's masters of the universe, liberals and centrists may have a new chance to complete the American social contract by adding some kind of universal health coverage and paid family leave to Social Security, Medicare and Medicaid. But they must be willing to support bold initiatives, not just tiny, incremental reforms like the small tax credits that beaten-down progressives specialized in during the era of Reagan and Gingrich. And liberals should not allow deficit hawks, including Democratic deficit hawks, to intimidate them into thinking small. If the federal government can afford hundreds of billions to bail out Wall Street, it can afford hundreds of billions a year in new spending or forgone tax revenue to provide healthcare for all Americans and paid parental leave for the parents of newborns.

Politics is the art of the possible. Any new universal healthcare and family-leave systems will result from compromises. The important thing is to focus on the goal. The healthcare and parental leave programs that complete FDR's economic bill of rights can be designed in various ways, but the social contract as a whole should be defined by a single set of characteristics.

First, the social contract should be citizen-based -- a term that Ted Halstead and I coined to combine the idea of a civic right with the idea of the separation of benefits from employment. (Note to readers who think the word "citizen" is "nativist": Citizen-based benefits should be shared on an equal basis with legal immigrants, as well as with amnestied illegal immigrants). Social Security and Medicare are classic citizen-based benefits, requiring a history of employment but not dependent on any single employer. In contrast, employer-provided healthcare and employer-provided parental leave policies are not citizen-based or portable. Removing any role for employers in healthcare and parental leave, except perhaps for collecting payroll taxes, would be good for the economy, by eliminating uncertainty about health insurance from career decisions and by freeing firms to concentrate on business.

Second, the social contract should be universal. It should not leave any Americans out.

Third, the social contract should take the form of social insurance programs in which everyone participates, not means-tested welfare programs limited to the poor. Economists who say that it is "rational" to deny benefits to the affluent in order to maximize benefits to the poor may be economic geniuses but they are political morons. The fact that in social insurance part of the middle class subsidizes another part of the middle class, like retirees, is a virtue, not a vice. As the saying goes, "Programs for the poor are poor programs." In the 1990s, affluent and middle-class voters supported the destruction of AFDC -- a means-tested welfare program for the poor created during the New Deal -- while they remain committed to Social Security and Medicare, which are classic universal social insurance programs.

Fourth, the social contract should be contributory. The model is not welfare, but insurance or annuities. Those who pay more in should get at least slightly more out, as in the case of Social Security. The reason for this has to do with civic political values, not narrow, utilitarian economic theory. In a democratic republic, we do not want one class that pays taxes but does not receive benefits, and another class that receives benefits but does not pay taxes. It's also not politically realistic to think that the middle class will give up benefits in order to double or triple them for the poor, and the rich are too few in number for cuts in their benefits to make a big difference in the budget. In theory a system of flat benefits for everyone might achieve the same goal, but the flat benefits would probably be so low that the affluent would have no stake in the survival of social insurance.

How might the goal of a comprehensive, citizen-based, universal, contributory social insurance system finally be achieved in the U.S., after decades of right-wing obstructionism? The New Deal shows that there are two methods, not merely one. To begin with, there are federal social insurance programs like Social Security and Medicare. Most proposals for universal healthcare, whether they take the form of a single-payer system, an individual mandate system or "pay-or-play," are assumed to be federal programs adopted with one vote by Congress.

But the social contract can also take the form of state programs with federal oversight and subsidies. The unemployment insurance system in the U.S. was created in the 1930s along with Social Security. There is no federal unemployment insurance program. Instead, the federal government pressured all 50 states into adopting their own systems, with variations within federal guidelines. In a similar way, the goals of universal healthcare and universal family leave could be pursued by the states with federal support.

Here's an example. As we have seen, New Jersey, California and Washington all have enlightened family-leave programs. A small state payroll tax levied on all workers pays for the partial substitution of several weeks' worth of the salary of the parent of a newborn infant or family caregiver. Congress could allow workers or businesses credits against their federal income or federal payroll taxes in the amount of state payroll taxes going to the state parental leave fund.

The same thing could be done in the field of healthcare. Today the federal government exempts employer-provided healthcare from income and payroll taxation. Tomorrow the federal government could end that policy and instead allow individuals and perhaps businesses to claim federal tax credits in the amount of the state healthcare payroll taxes they pay. This would permit states to use state payroll revenues to experiment with different systems -- funding a statewide single-payer system, or providing vouchers for an individual mandate system. States might even be permitted to experiment with the right-wing nostrum of "health savings accounts," an unworkable approach that would fail and be repudiated by conservatives themselves if ever it were tried on a large scale.

What matters is the destination, not the several routes by which it can be reached. The goal remains the one mapped out by Franklin Roosevelt in 1944. Then as now, constitutional government and political stability are endangered by economic insecurity, which leads desperate people to turn to crackpot panaceas and dangerous authority figures. Then as now, the more turbulent the national and world economy, the more important it is to cushion all Americans against the shocks. As the greatest president of the 20th century observed more than half a century ago, "America's own rightful place in the world depends in large part upon how fully these and similar rights have been carried into practice for our citizens."