No more "wars of choice"

If the Democrats will stop trying to out-hawk the Republicans, the Obama administration can begin rebuilding America's economy and military -- and international image. 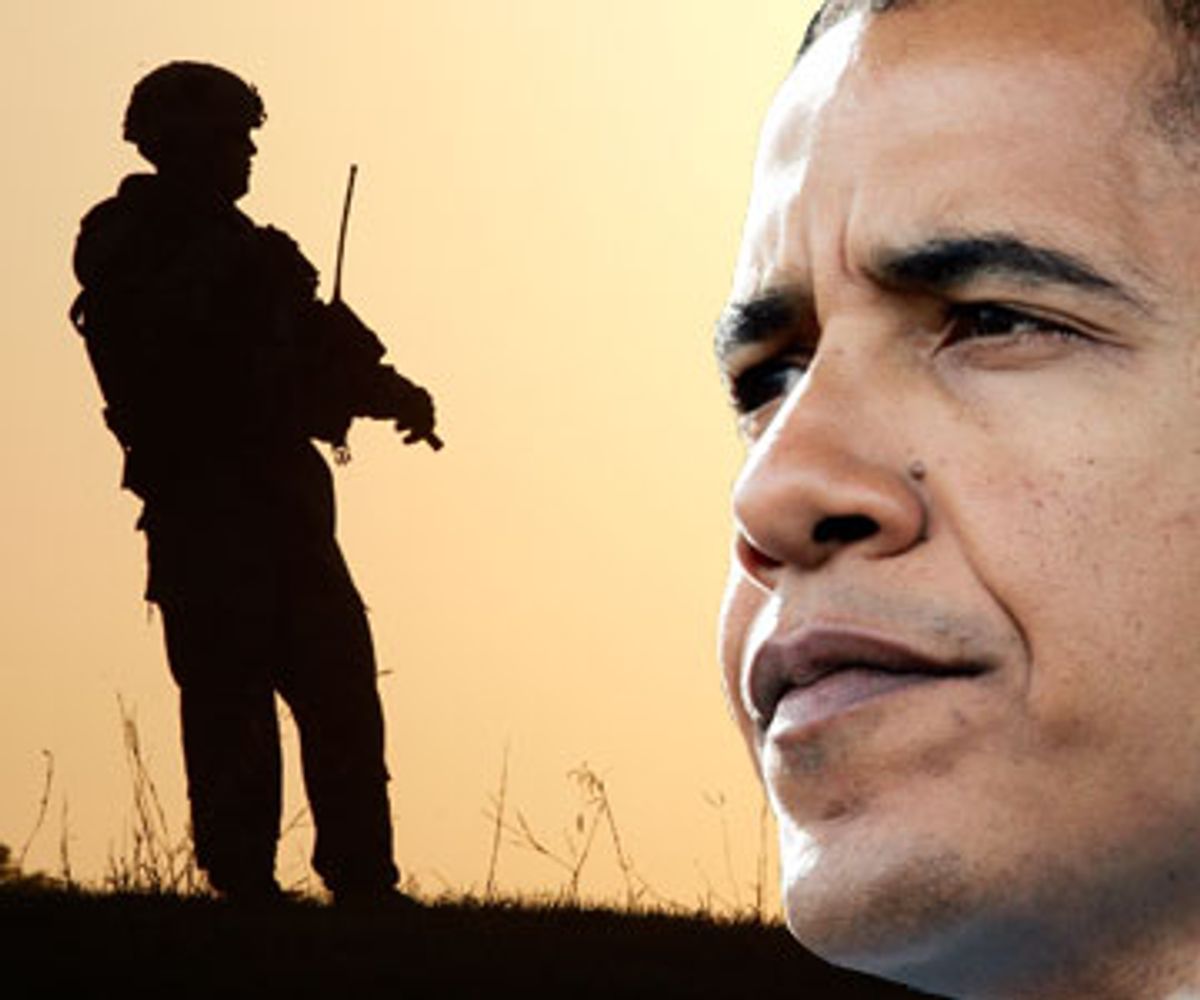 When Mikhail Gorbachev came to power in the 1980s, he sought a truce in the Cold War, a breathing spell that would provide time for reformers to engage in "perestroika," or "restructuring," of the Soviet Union. In the aftermath of the Bush administration's hyperactive militarism and manic overextension, the U.S. needs a similar breathing spell in foreign policy that will permit concentration on rebuilding, not just reviving, the U.S. economy and its social contract. The Soviet Union proved to be unreformable and collapsed. But an American perestroika has the chance to result in a modernized, stronger American economy and society -- if a period of relative calm in foreign affairs allows resources and attention to be given to domestic reform.

Unfortunately, the Democratic Party's foreign policy mandarins are ill-prepared for peace. Many centrist Democrats have spent so much time in the last few decades trying to prove that Democrats can be as hawkish as Republicans that they have become hard to distinguish from bellicose neoconservatives. A number of liberal hawks joined the Weekly Standard neocons in supporting the Iraq war. To make matters worse, many "humanitarian hawks" have spent a generation arguing that the U.S. should fight more wars, not fewer, intervening in countries like Sudan in the name of human rights or a "responsibility to protect." Worst of all, the fashionable idea among centrist Democratic foreign policy intellectuals has been the concept of a "concert of democracies," which would marginalize China and Russia. No wonder that John McCain and the neocons love the concert-of-democracies idea.

While we have to defend ourselves against genuine threats, we need a prolonged period without any more "wars of choice" and with fewer other optional and costly interventions abroad, in order to concentrate on reconstruction at home. That doesn't mean "a retreat to isolationism and protectionism," the bogey that foreign policy pundits are always warning us to dread. American isolationism became impractical in the early 1900s, when industrialized warfare eliminated the oceans as moats and made concentrations of hostile military-industrial power anywhere on the planet an American concern. In the Obama administration, a new internationalism, not a new isolationism, should replace the Bush administration's failed bid for American world hegemony. But the new American internationalism should be informed by the pragmatic spirit of Franklin D. Roosevelt and should reject the hyperactive messianism of liberal hawks and neocons alike.

Reflecting on the failure of the League of Nations, FDR concluded that the Wilsonians had ignored power realities. Roosevelt based his vision of the United Nations (a name he coined) on the hope that the anti-Axis alliance of the United States, Great Britain and the Soviet Union could be converted into a permanent great-power concert. The addition of Nationalist China and France to the Big Three completed the roster of the permanent five members of the U.N. Security Council.

Roosevelt's grand design failed, because after 1945 the Soviet Union, like China after Mao overthrew the Nationalist regime, refused to act as a contented status quo power. A second chance for a great-power concert came after Mao's death and the end of the Cold War. The Gulf War, which punished Saddam Hussein for violating the post-1945 rule against wars of aggression and conquest, won almost universal support. Tragically, following the Gulf War it was the U.S. that refused to act as a contented status quo power. Many liberals as well as conservatives were intoxicated by visions of an all-powerful U.S. in a "new American century."

The Clinton and Bush administrations squandered a historic opportunity, by treating post-Soviet Russia and China as threats to American primacy rather than integrating them into a great-power security system. The U.S. humiliated Russia by bombing its ally Serbia, expanding NATO to its borders, and insisting on installing missile defenses in eastern Europe, while refusing to provide any path by which Russia could ever join NATO. Meanwhile, the U.S. sought to turn post-Soviet republics in Central Asia bordering Russia and China into American client-states and engaged in a low-key rivalry with both Russia and China to dominate Caspian Sea oil resources. As though this weren't enough, the U.S. threatened China along its borders by air and sea, and Washington analysts talked openly about a "containment" of China by the U.S., Japan and India.

Predictably, China and Russia have pushed back. They formed the Shanghai Cooperation Organization (SCO) and carried out joint military exercises to send a signal to the United States. China shot down one of its own satellites to show the U.S. military what it is capable of. Fearing U.S. military control over Middle Eastern oil supplies, China has made deals with unsavory, anti-American petrostates from Sudan to Venezuela. Meanwhile, Russia has tried to rebuild a sphere of influence by bullying neighbors dependent on its natural gas lines and attacking Georgia, America's new satellite state and potential NATO member. My purpose is not to excuse Chinese or Russian policies, but merely to point out that they are predictable strategic responses to America's policy of encirclement and humiliation.

Neither the U.S. nor the world can afford Cold War II, which would be crippling in its costs even if it were relatively bloodless. All other foreign policy challenges -- from global warming and global development to anti-terrorism -- would become more difficult to address. The greatest geopolitical challenge facing the Obama administration is therefore not jihadism, a threat that is serious but limited, nor is it bringing permanent peace to the Middle East, important as that is. It is averting a second Cold War among the industrial great powers.

To that end, Obama should repudiate the failed strategy, pursued by the Clinton as well as Bush administrations, of seeking to establish American hegemony by keeping other great powers -- China and Russia in particular -- as humiliated, weak and isolated as possible. It is not enough to change the rhetoric and talk about multilateralism rather than unilateralism. Neither is it sufficient to engage in paternalistic language about "integrating" rising powers into a global system in which the U.S. continues to set the rules and grades the participants. Nor is the answer a "new Atlanticism," with a Euro-American axis as the center of world politics, and NATO rather than the U.S. as globo-cop. The era when the West policed the rest is over.

A new American liberal internationalism means genuine power-sharing in international security and international economic institutions, with China, Russia and India as well as the major states of the Muslim world, Latin America and Africa. A neo-Rooseveltian concert-of-power strategy does not depend on reforming the anachronistic U.N. Security Council. The recently organized G-20 could serve as an informal replacement for the Security Council, with its outmoded membership limited to the victors of World War II.

Most conflicts are regional. The U.S. should play a leading role in organizing regional great-power concerts, which are legitimate under existing U.N. rules. The U.S. and its European allies should turn NATO from an anti-Russian alliance into a pan-European concert by inviting Russia to join NATO. Washington should also promote regional security concerts in which it takes part in East Asia, South Asia and, if possible, the Middle East. Regular summit meetings and multilateral military exercises will not produce identical national interests. But they can encourage the habit of consultation and collaboration.

In addition to replacing alliances against China and Russia with great-power collaborations that include them, a new liberal internationalism in the Roosevelt mold would foster a revival of arms-control negotiations. The Bush administration was hostile to arms-control negotiations on principle, hoping that the U.S. could perpetually outspend all other powers combined on weapons. As the fate of the Soviet Union proved, that strategy leads to economic as well as strategic bankruptcy. Even Ronald Reagan followed his arms buildup with negotiated arms reductions. Following the Gulf War, arms control was replaced by anti-proliferation, which in turn was perverted to mean preventive war against countries like Iraq. The Obama administration can signal a dramatic break with the strategy of its failed predecessor, by organizing new multilateral negotiations to avert nuclear proliferation, a costly arms race in space, and the deadly spread of small arms, along with other subjects of universal concern like global warming. And the U.S. should support rather than oppose a global land mine treaty.

Of course, the U.S. can do everything right and still find it necessary to use force to defend itself and its allies against jihadist zealots, international pirates or criminally belligerent countries. Even after awakening from the delusion of unilateral U.S. world domination, the U.S. as a member of concerts and alliances in regions outside North America will need an effective military capable of global power projection. But an appropriate U.S. military would look quite different, and cost considerably less, than today's military, which is designed to fight the Soviet Union, if not Field Marshal Rommel and Admiral Yamamoto.

I can hear the objections: "If the Obama administration did what you suggest, the right would accuse Obama of appeasing Nazi Russia and imperial China. Conservatives would claim that arms control negotiations and smaller but smarter defense budgets will lead to the next Pearl Harbor."

This objection might have made sense during the long period of conservative ascendancy between Vietnam and the Iraq war. But in 2006 the American people tossed the Republican Party out of Congress to punish it for Iraq, and in 2008 they rejected the most hawkish candidate, John McCain. I think there is a historic opportunity for a new American internationalism in the Roosevelt tradition that is not neoconservatism lite and that would buy time for U.S. domestic reform. But that opportunity will be missed if Democrats cannot unbend from a defensive crouch and they continue to tremble in fear at the thought of what their enemies might scrawl about them on the alley wall.

Boldness is the common characteristic of the three strategies that make up what I am calling the New Contract: the next American system, the citizen-based social contract, and the new American internationalism. The three strategies are mutually reinforcing. The next American system, by shifting the U.S. economy from imports and debt to manufacturing-led growth and savings, will generate resources to support a more generous social contract. The citizen-based social contract, in turn, will contribute to economic growth by relieving business of any role in social insurance. The new internationalism, if it is successful, will achieve U.S. security at a lower cost, permitting attention and resources to be focused on growth and equity at home.

It will take liberals time to learn to think and act boldly again, after being on the defensive throughout the disastrous period of conservative intellectual and political hegemony. The challenges of our day will compel even the cautious to be bold. In the words of Lincoln, in his annual message to Congress in December 1862, at the dawn of another era in American history: "The dogmas of the quiet past are inadequate to the stormy present. The occasion is piled high with difficulty and we must rise with the occasion. As our case is new, so we must think anew, and act anew. We must disenthrall ourselves, and then we shall save our country."